In 2017, London will be home to a wonderful new gallery. Science Gallery London will be a new space where art and science collide, with a focus on a 15–25 year old audience. They approached us to provide the campaign design for a season of pre-launch activities and happenings, on the theme of food.

A flagship project for King’s College London, Science Gallery London is based on the hugely successful model of Science Gallery Dublin. It is the first of an ambitious internationally spread Global Science Network, and this campaign was the first to be designed outside of Ireland. 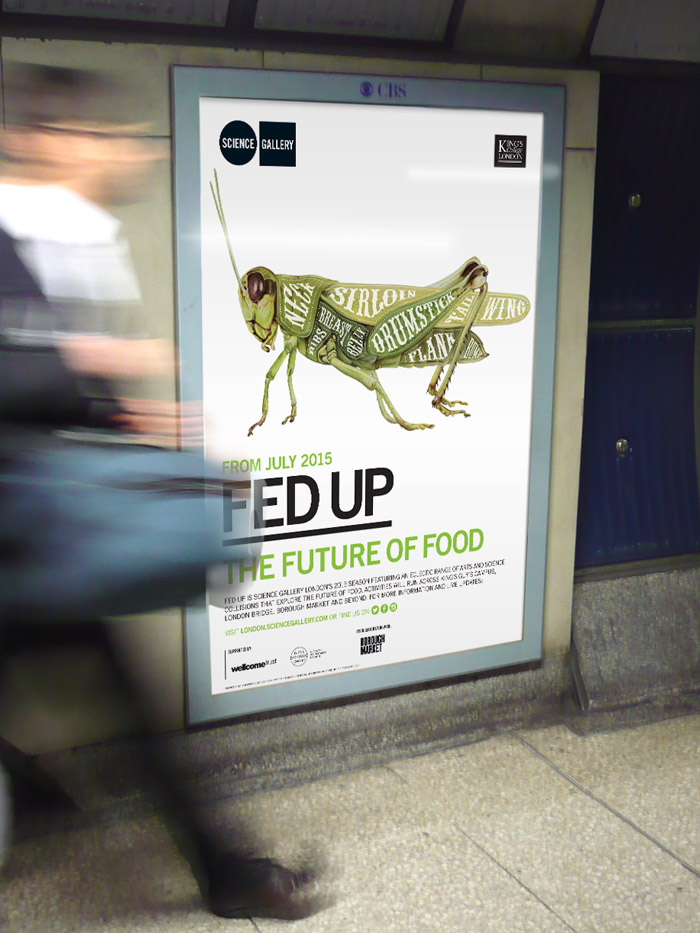 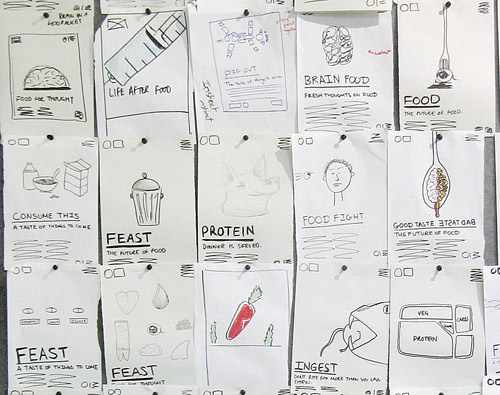 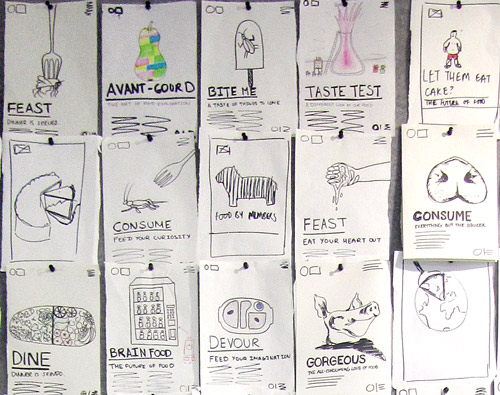 Global Science Network have excellent and specific guidelines for design layouts, but everything else was open to our input, including the text. And as the events had not been confirmed in advance, we had no strong visual references or themes to work from. 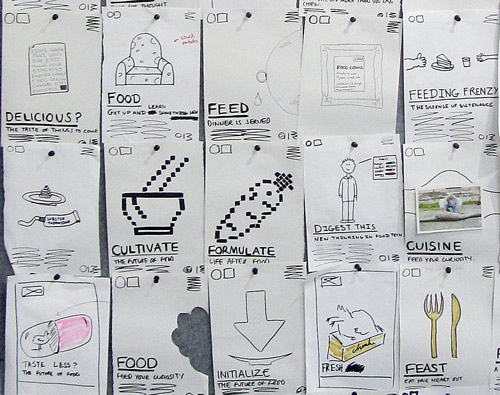 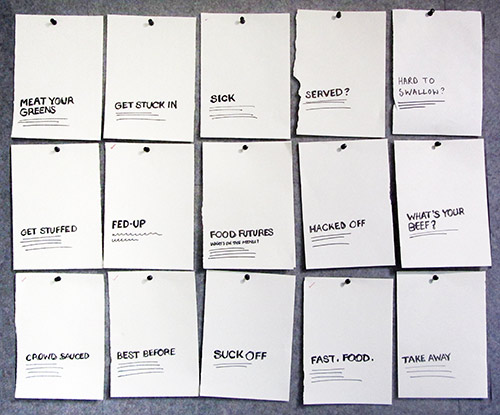 Our pinboard walls came in to full effect as the whole team contributed ideas for a strong central campaign image and an engaging title for the season.

We are always keen to involve our clients in the creative process (if they want to be involved) so, with the pinboards full of sketches we invited Museum Director, Dr Daniel Glaser and his team to come and chat through the work we’d done. 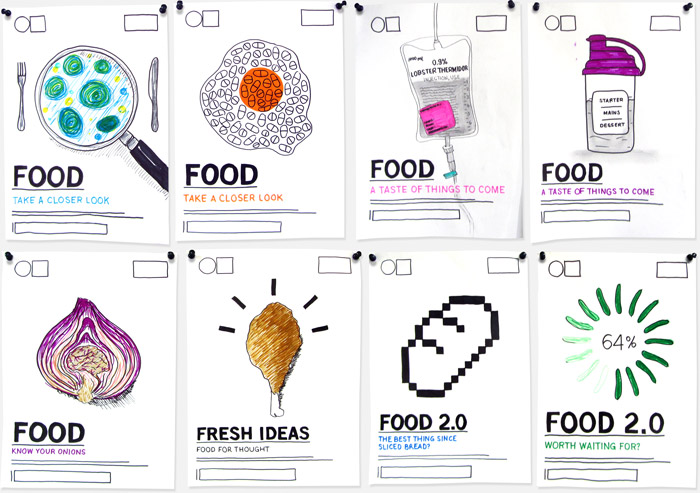 What was great about working with the team at Cog wasn’t just their ability to work conceptually, without a huge amount of direction, but also the maturity with which they shared their creative process – allowing the Science Gallery London team to stay at the centre of the project through to its realisation. We’re delighted with the result. We’ve been delivered a really strong campaign visual and I’ve learnt a lot along the way. 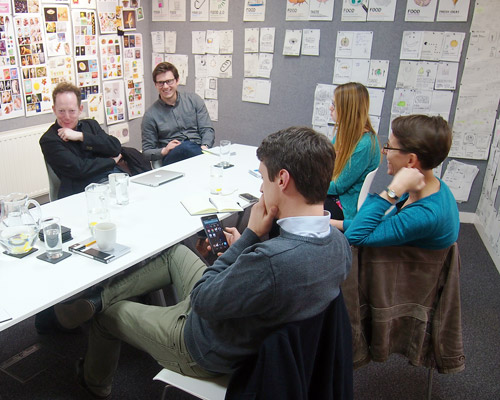 The Science Gallery London team, in the Cog studio to discuss our initial sketches. 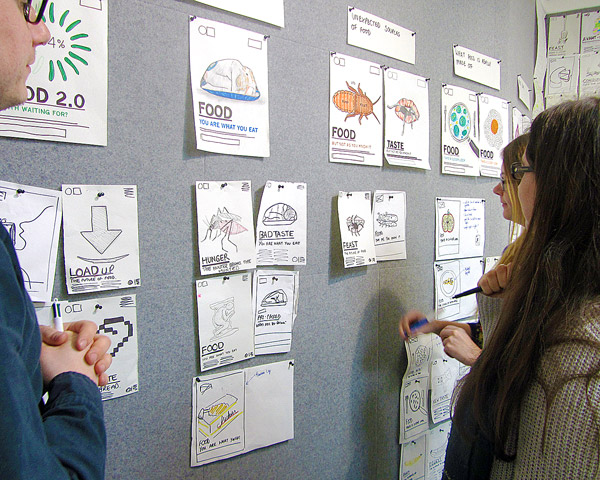 The team discuss our sketches. Note the cockroach image in the centre.

As so often happens when we talk to brilliant people, they focused our ideas and opened up new directions. We spoke a lot about the near future of food, how it’s less likely to be lab-based science and more likely to be about discovering and re-purposing ancient techniques. We also talked about the core audience: young people who feel bombarded by messages about healthy eating, but feel excluded (by price and social conventions) from accessing those alternatives.

We kept coming back to one of the sketches, a cockroach in the style of a butcher’s chart, showing cuts of meat. It was relevant and recognisable but with the right kind of twist and quirkiness and a nod towards the scientific. But, as our client pointed out, you wouldn’t eat a cockroach because they feed on excrement. 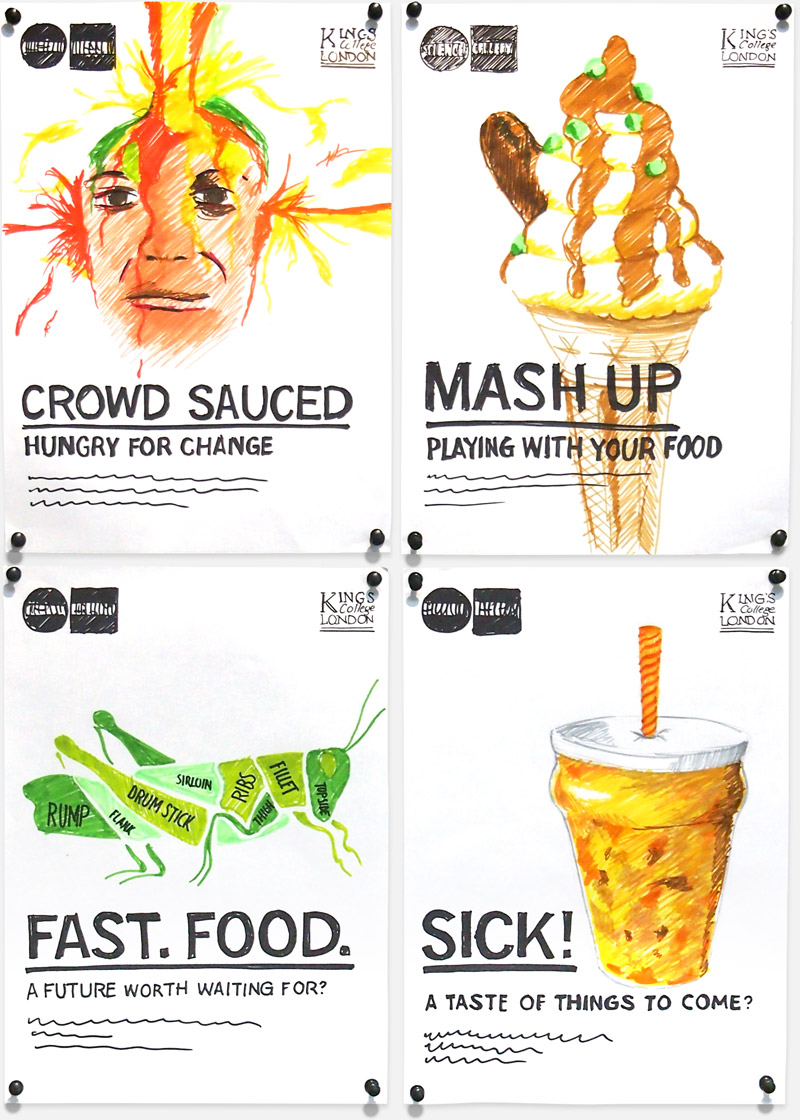 Invigorated by the client feedback, we looked through our sketches, pulled them out and reworked them to more clearly aim at the youth audience. We repurposed the cockroach image, and used a grasshopper. By this stage, we began to properly marry the season titles, taglines and imagery but were still working in sketch form so the ideas were consistently presented.

After some simple audience research, the grasshopper route was chosen.

We spoke to photographers and found sources for buying live samples, but we opted to use an illustration as that would give us much more control of the finished image. 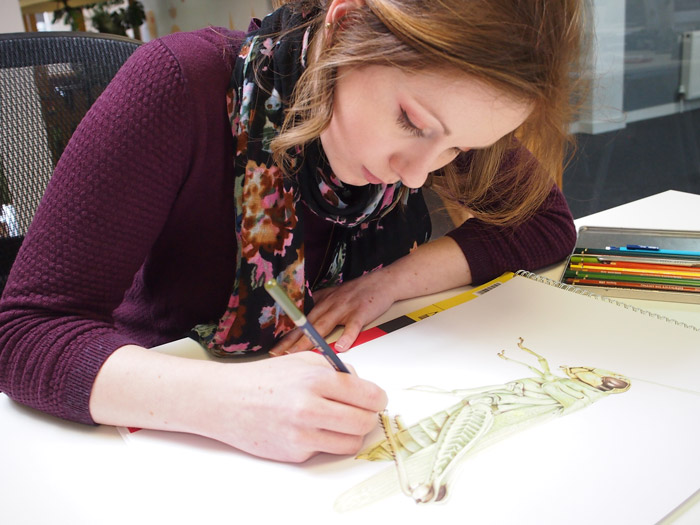 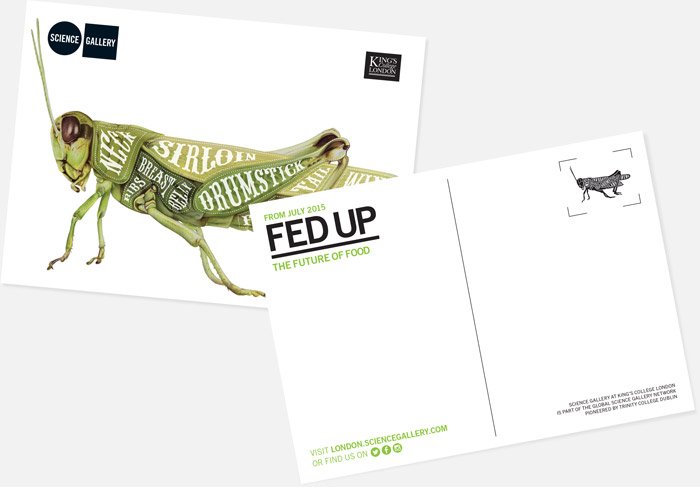 I’m so pleased with the finished result. The image looks stunning and works really well in the context of the Global Science Network poster layouts. The title is a nice nod towards the core audience and the tagline concisely summarises the season’s activities.

As well as the full colour posters and print, we knew that our client would need the image to work on small, low-budget items. So we reworked it as a simple black and white outline drawing for promotional merchandise. 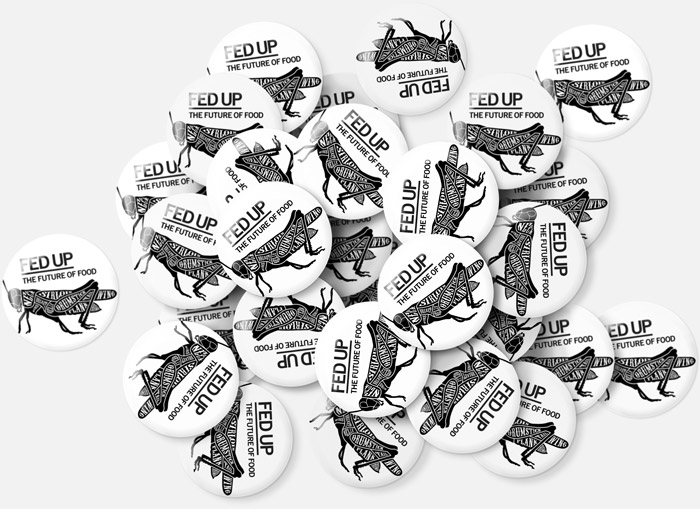 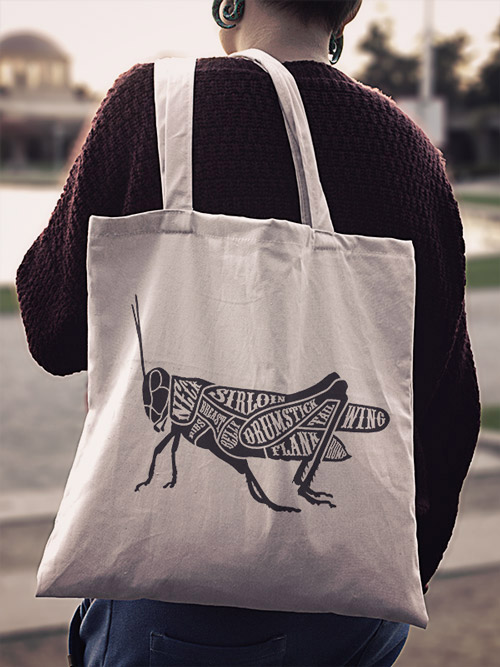 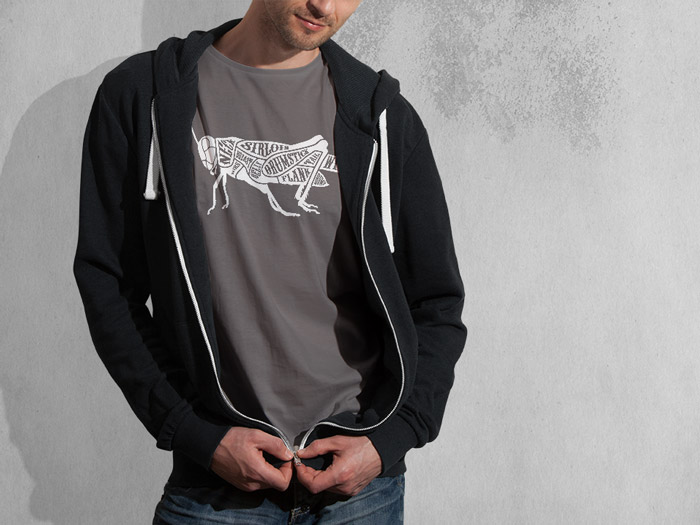 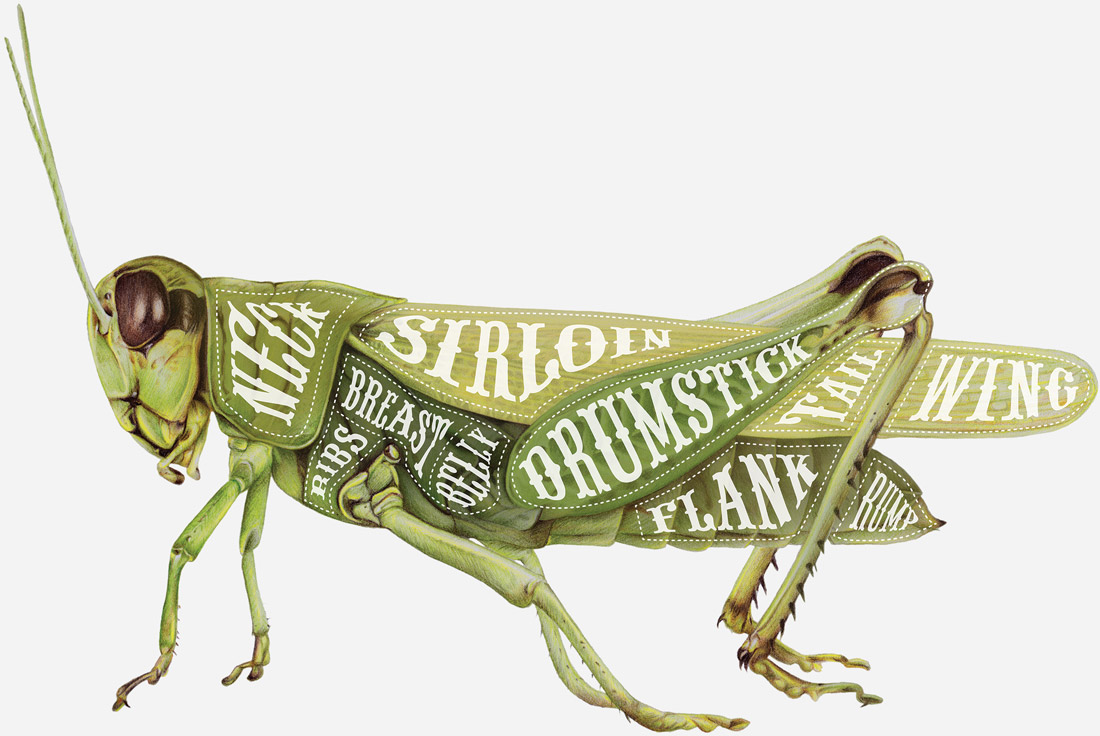