The Associated Board of the Royal Schools of Music is the UK’s largest music education body, one of its largest music publishers and the world’s leading provider of music exams. Each year they assess 630,000 candidates in 93 countries. They’d been through an extensive rebrand (by agency 300Million), completed in 2009, which included a new marque and naming as ABRSM.

With a new Chief Executive in place, ABRSM approached us to complete an audit of their needs. Everything was open to discussion and there was much talk of an all new visual identity and a clean slate. 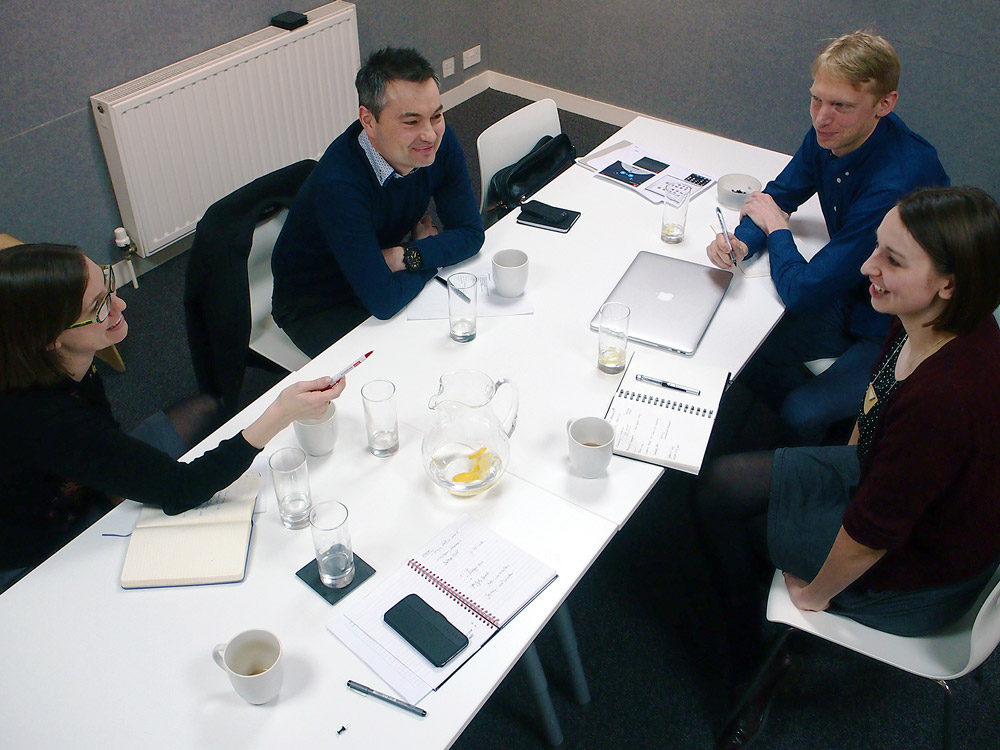 An early meeting with Gilly and Tony from ABRSM

We spent time considering all of the options until we were clear in our recommendation to evolve their current branding rather than reinvent it.

It’s unusual for a design agency to argue against a rebrand but we felt it was in our client’s best interest for several reasons:

Plus… we really liked the marque. We remember how jealous we were when the rebrand happened and we saw that very clever design solution.

The existing marque, designed by 300Million

There were also strong arguments for change, not least as a signal (both external and internal) that the organisation was growing and evolving.

We identified three key reasons for change and focused our thinking in these areas:

I’m particularly struck by how much sharper and more dynamic the logo looks in an on-screen context (particularly evident when looking at our social media pages on a mobile device).

We began by looking at the existing logo. We knew that we wanted to retain the crown/stave idea but needed to simplify it for digital use; it needed to be bold, clear and confident at the smallest size (one centimetre square on an online social media feed) and the largest iteration (projected behind the keynote speaker at their annual conference).

We worked through many variations of the crown, redrawing every element until we achieved the perfect balance – even enough to be consistently legible but curved enough to retain its character. We wanted to retain its charm but make it a more solid, confident marque.

We also looked at dozens of typefaces to achieve a similar effect with the lettering. Eventually we settled on a characterful font that we adapted and redrew to make it perfect (and unique) for this purpose.

The existing logo had particularly strong recognition when used in its a red box configuration. But it had been designed to hang off the top of a page of print so it felt unbalanced and bottom-heavy when used as a standalone element. With our new version we wanted a marque that would work consistently in all contexts. And we wanted to ensure that the emphasis of the logo was clearly on the lettering, with a crown on top.

The addition of a simple underline provided the solution to both issues – the red boxed logo now had consistent balance wherever it was used and the ‘shadow’ meant that the crown could be reduced in size without losing its gravitas, giving an increased prominence to the lettering.

We also took the opportunity of moving to a more sophisticated shade of red, a richer tone that felt more distinct to ABRSM. 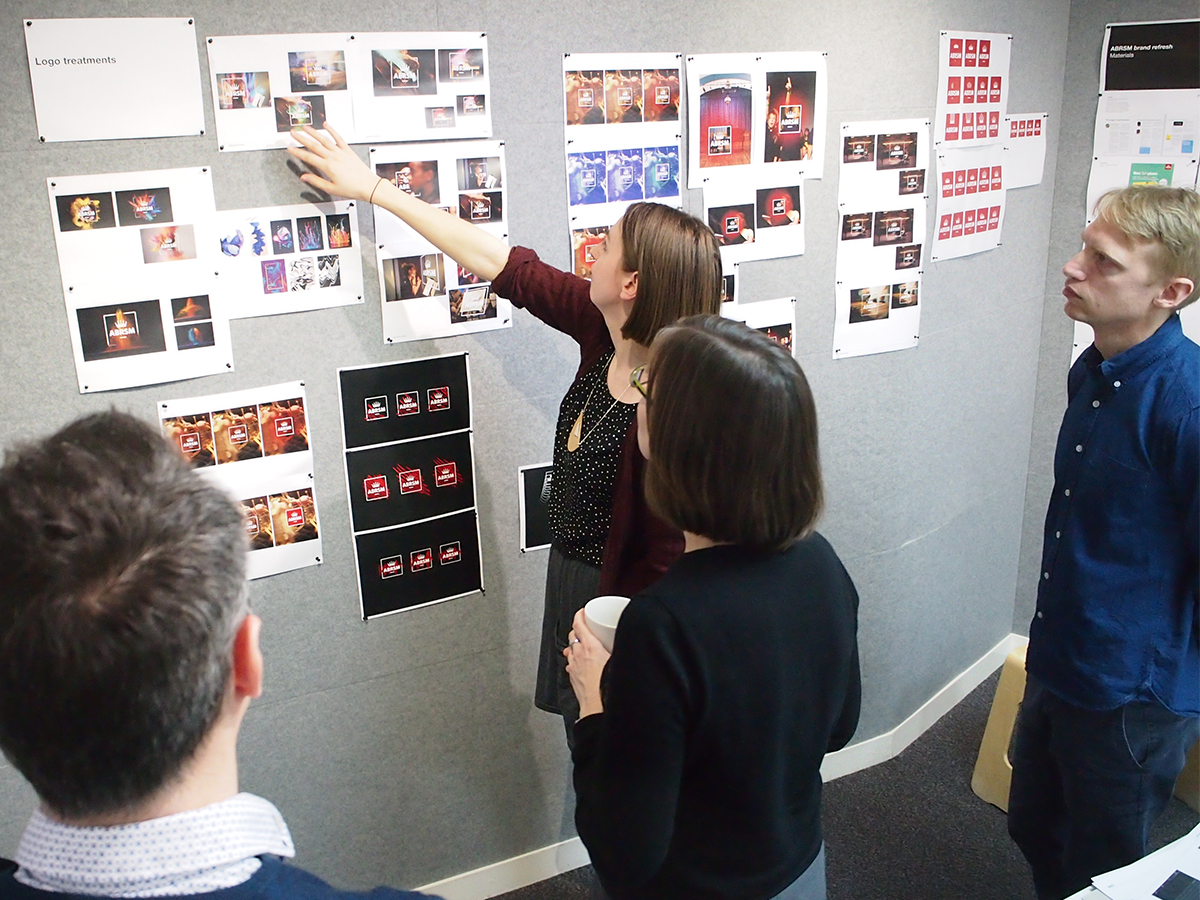 Discussing options for how to inject movement and personality into the visual identity.

We’d deliberately made the logo marque more solid and less frivolous but we’d always planned to counter that seriousness through playful implementation. We wanted to include options for movement and energetic treatments (reflecting the youthful energy of the audience).

We worked with our clients to create a visual system that could accommodate a full spectrum of communications: from traditional examination certificates to posters in the classroom; from academic reports to classroom teaching materials. 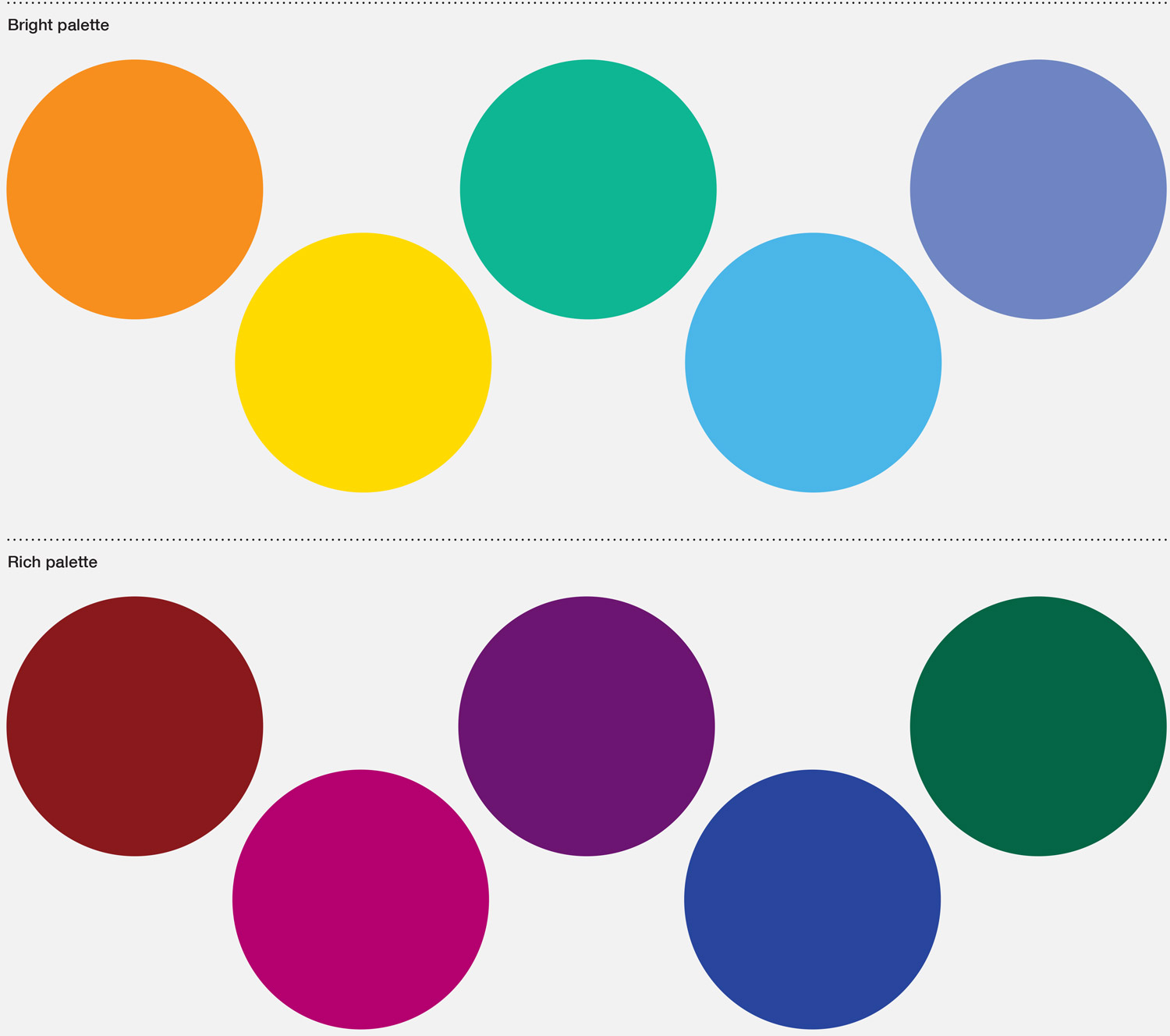 We introduced two new colour palettes – ‘bright’ for communicating with potential students, ‘rich’ for business communications and reports. And we selected two new typefaces, specifically designed to work on screen and in print – distinctive, characterful and with similar letterforms so they sit well near each other and can swap between headlines and text.

We also got our paint-brushes out to show how simple strokes of colour could enhance even the simplest piece of communication. 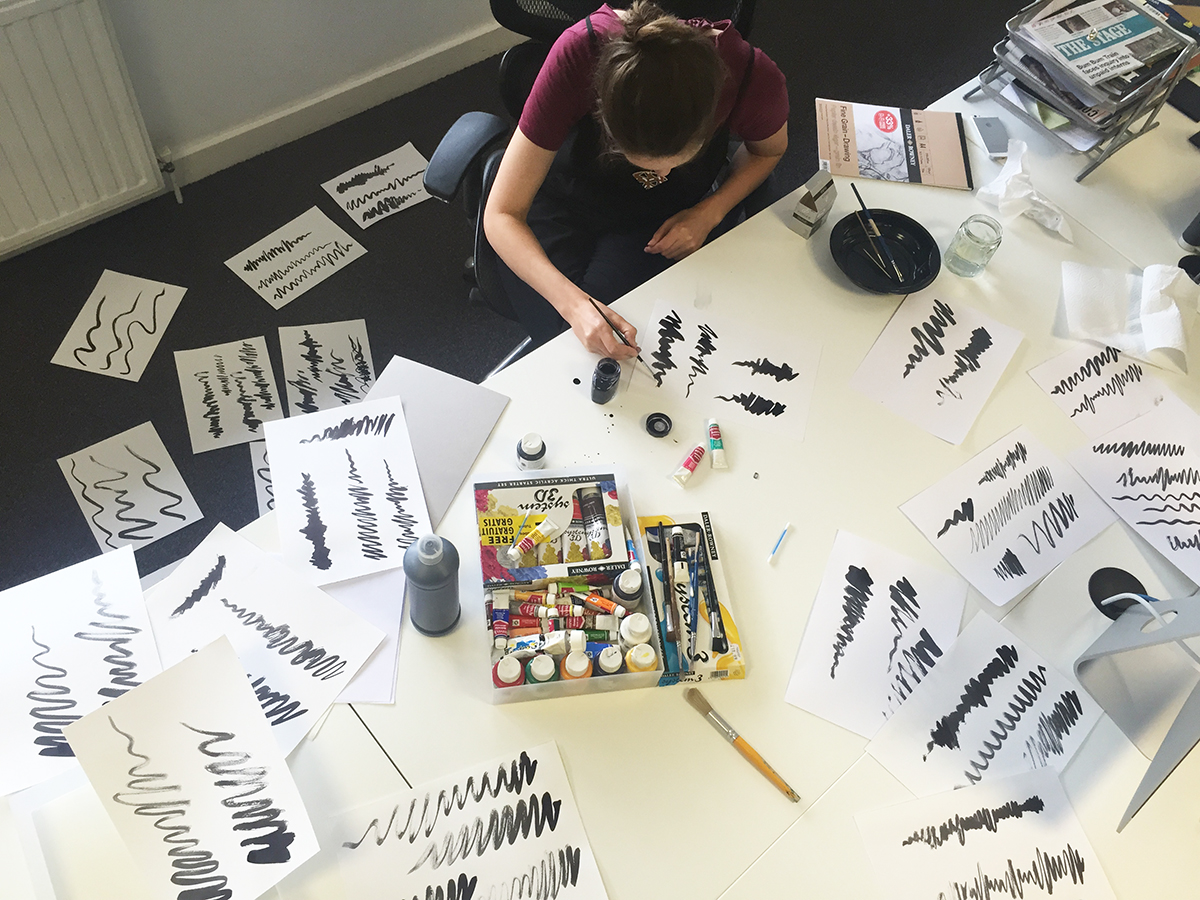 Anna, in the studio, creating ‘movement’ through paint and ink.

One of the big challenges that we’d identified early on was the quality of photography that ABRSM had been using. They had relied on stock-libraries for many years and had long since exhausted the supply of ‘young music makers’. They tended to opt for the best image available at the time, rather than seeking the perfect images for each piece of communication. 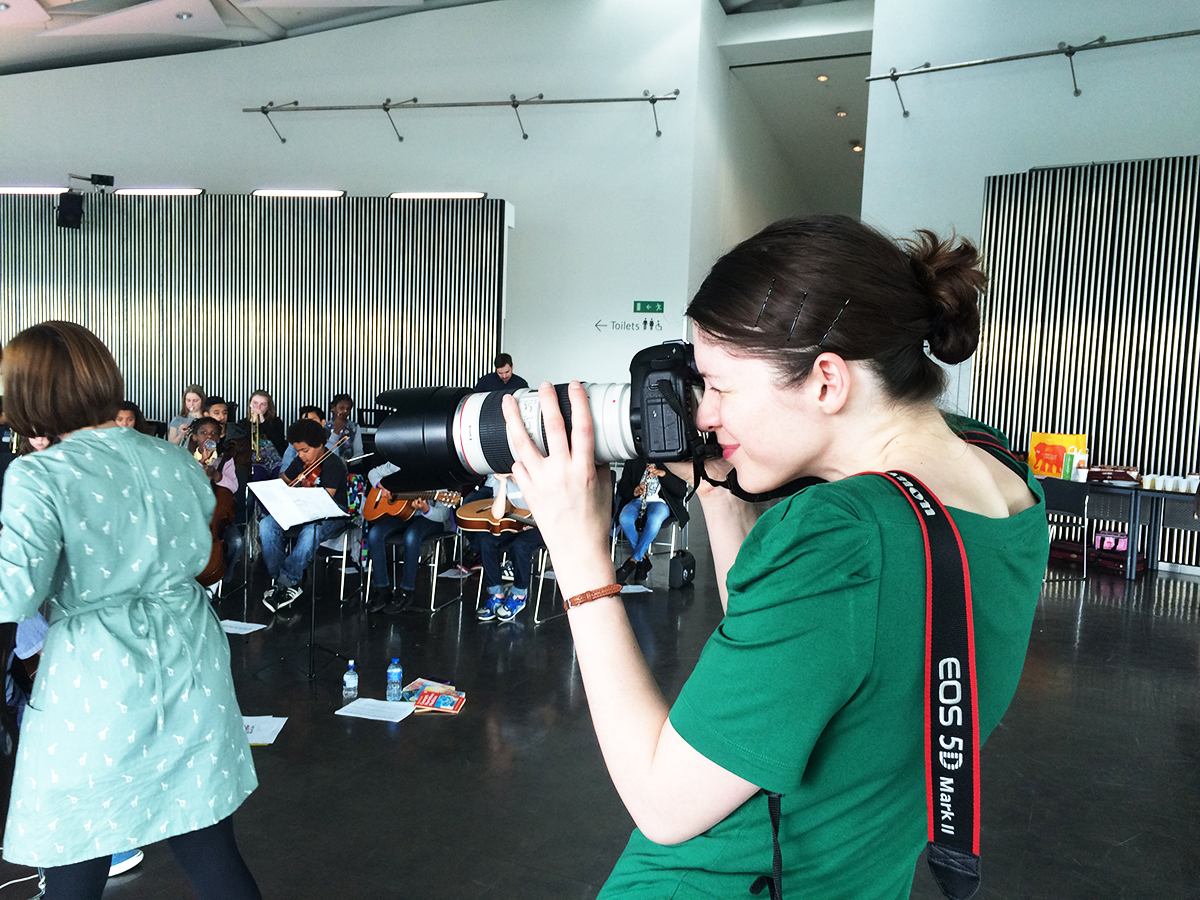 Photographer Olivia Hemingway at our shoot, arranged with the Mayor’s Music Fund at City Hall.

We worked with them to commission photographers Patrick Harrison and Olivia Hemingway, and gave them a brief to focus on human interaction: people, engaged in their music; engaged with each other whilst making music; or engaged with the viewer in a musical setting. They did a great job and provided ABRSM with an initial library of images that they will continually build on. 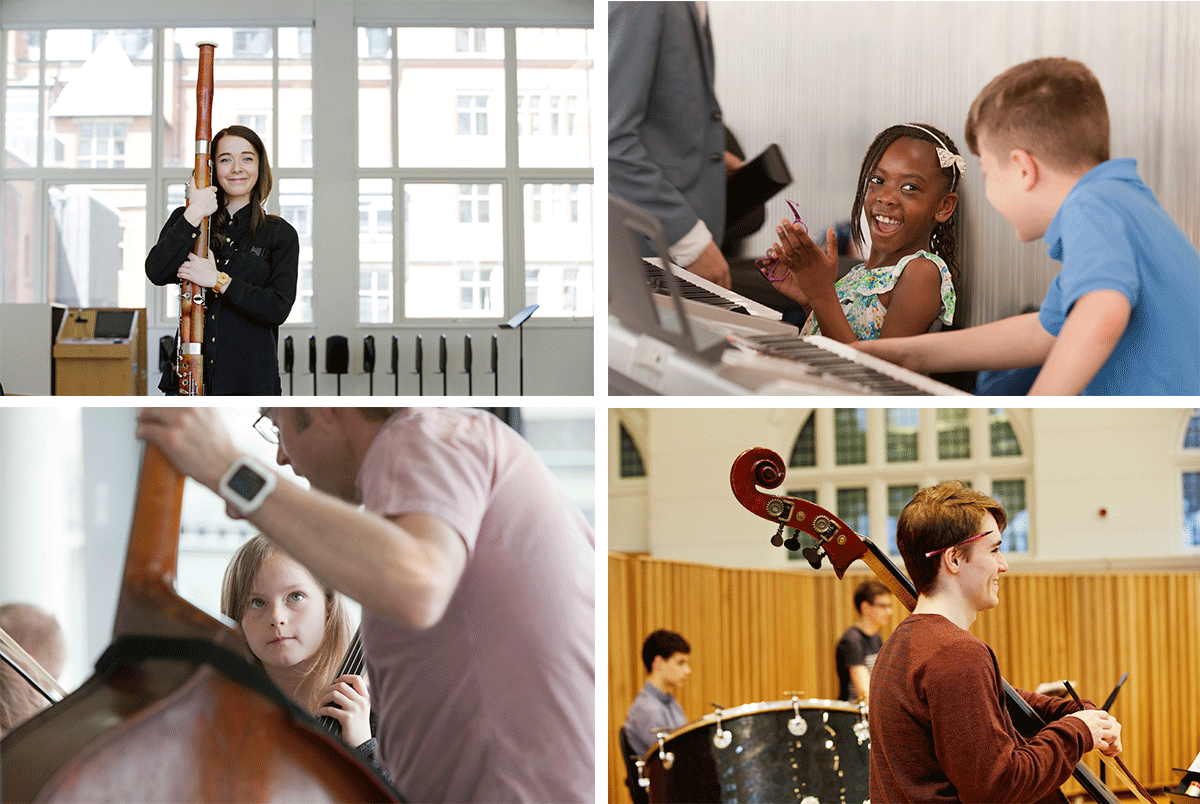 With all the elements in place we produced a series of examples of how everything could be brought together to create different types of communication for varied audiences. 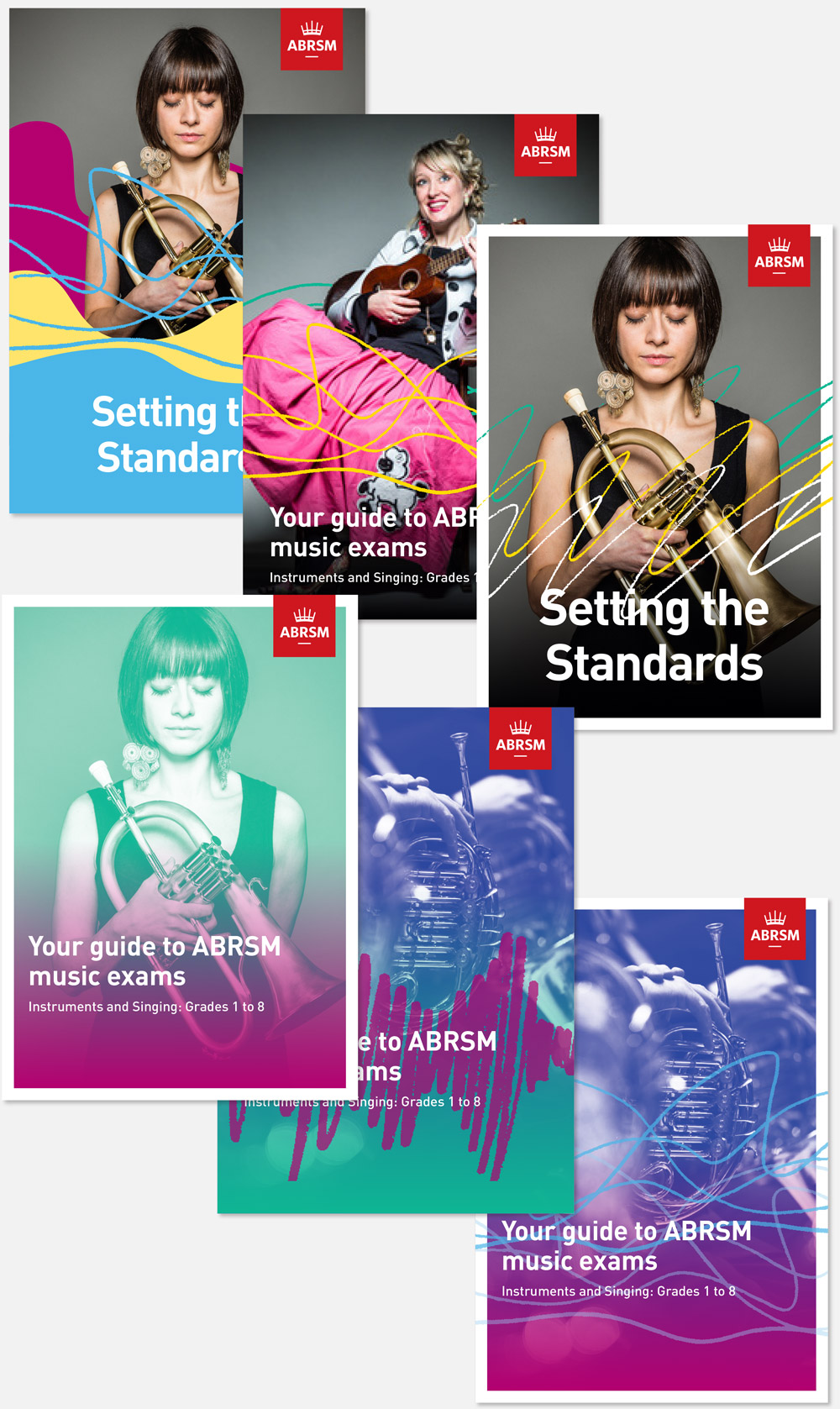 And how the marque could be used in a variety of ways, to add personality and dynamism whilst retaining a consistent visual framework.

And we distilled all of our thinking down into simple instructions that could be sent to their international offices, ensuring a consistent application of the flexible visual identity. 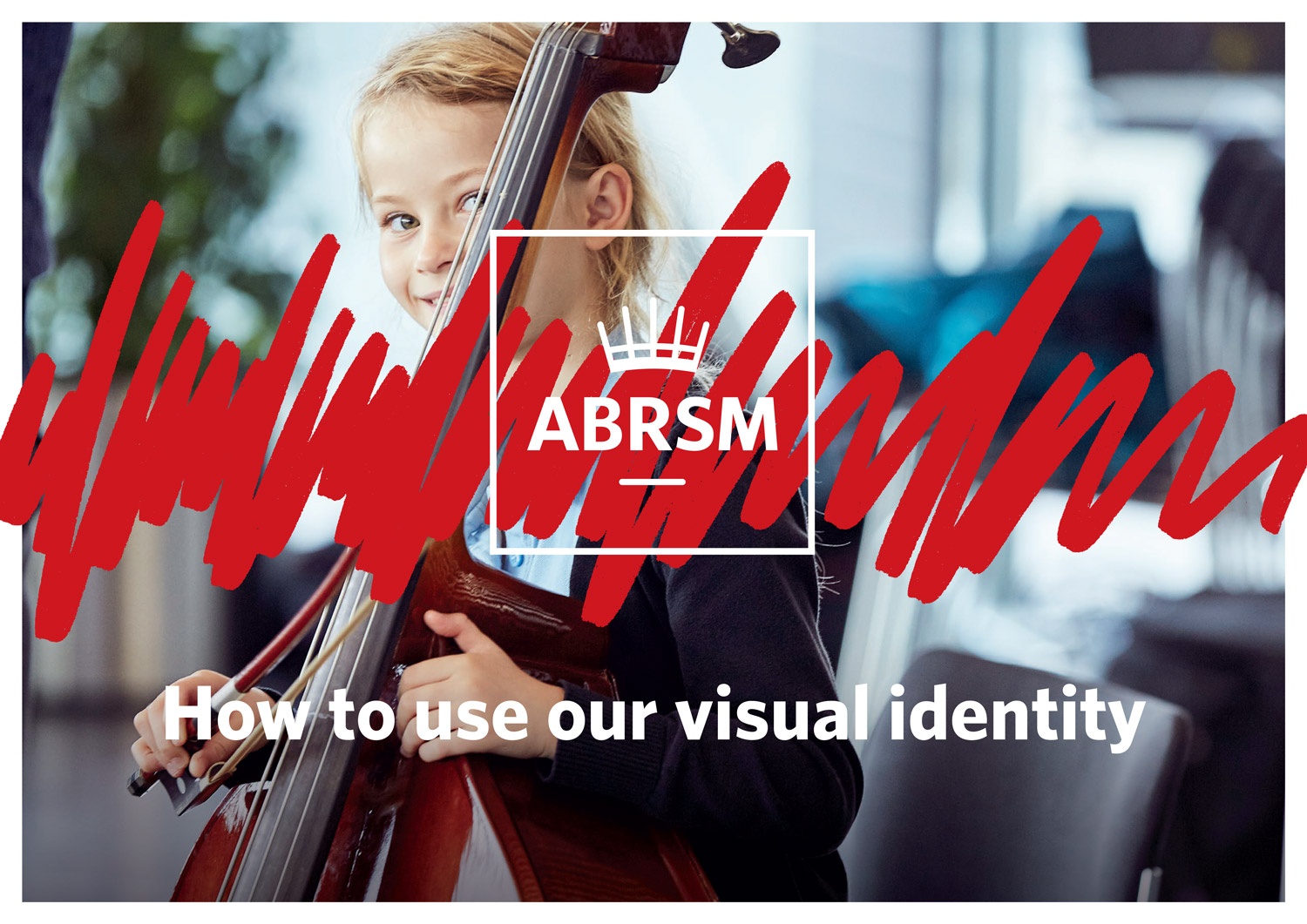 Since we completed the rebrand we’ve continued to work with the ABRSM team on a series of press ads, digital animations, video stings, and a range of different leaflet and banner templates that will make production more efficient and effective for the teams around the world.

With And For Girls

Working collaboratively with panels of girls across the globe, we created the branding for this $1m… END_OF_DOCUMENT_TOKEN_TO_BE_REPLACED

The UK’s oldest professional chamber orchestra approached us in spring 2014. On the verge of big… END_OF_DOCUMENT_TOKEN_TO_BE_REPLACED