The Belgrade is a theatre with a fascinating backstory.

Coventry was flattened by bombing during the Second World War. Using timber donated by the city of Belgrade (then the capital of Yugoslavia), this new theatre emerged as a beacon of hope, a symbol of renewal at the heart of the city.

Now, in a post-industrial age, the city is turning to the arts once again. Coventry will be the UK’s City of Culture in 2021 and The Belgrade will be at the heart of that regenerative celebration.

Their team were looking for a new website that reflects that optimism and ambition – and of course a site that makes it as easy as possible for audiences to buy tickets, make donations and get involved. 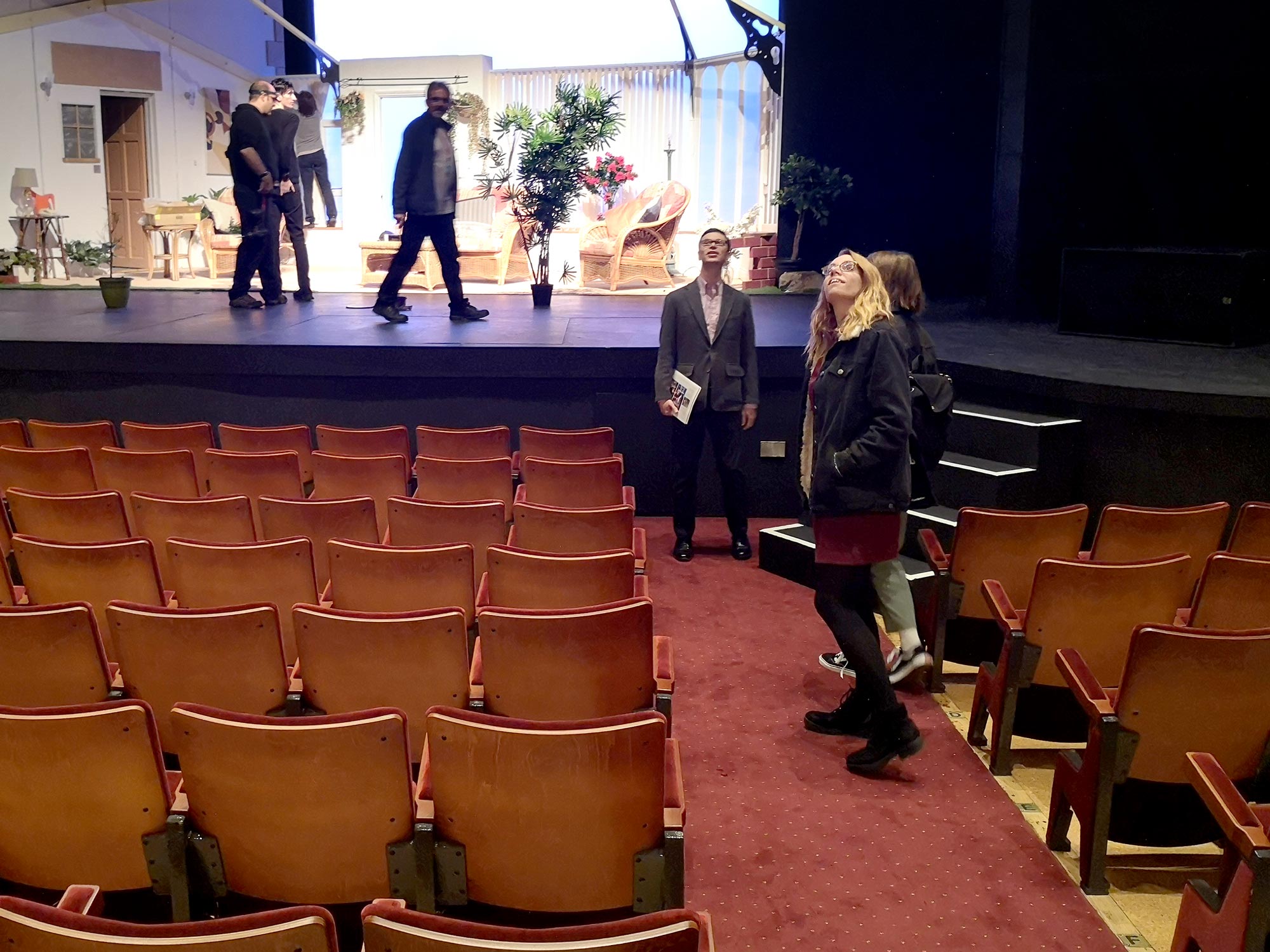 Jen and Anna on a tour with Communications Manager Ray Clenshaw, in the impeccably restored main theatre space.

We began that process with series of workshops and trips to Coventry.

We had a tour of the building and heard all about its history. We saw the front of house, the back-stage area, the offices, the incredible black-box second space, the cafe and bars.

We saw the flats where the acting company used to live, where a struggling young actor called Ian McKellen stayed at the start of his acting career.

And we stayed for a show because it’s so important to get a feel for the experience of being in the building during an event. 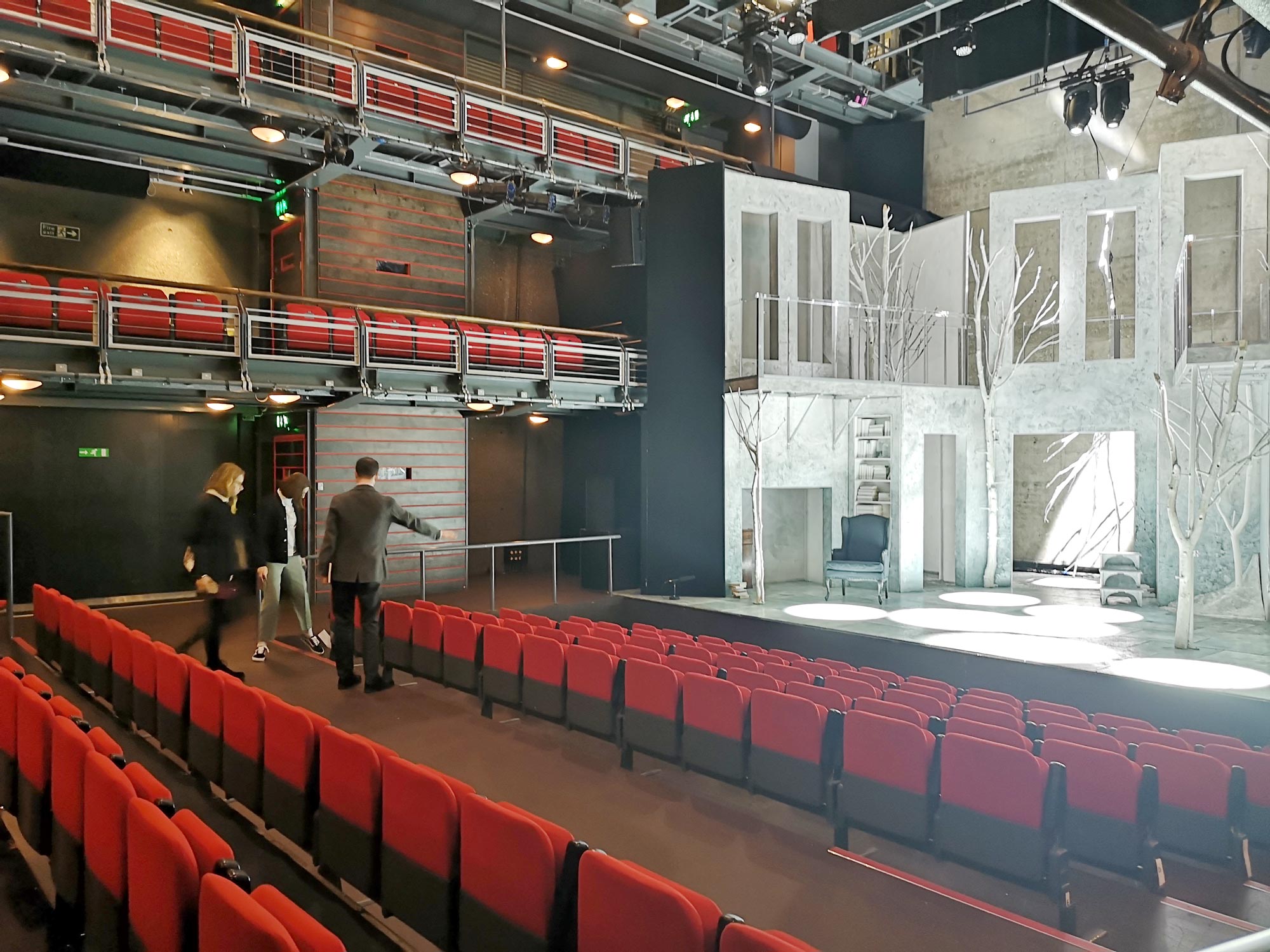 Jen, Anna and Ray continuing their tour in the second space, a stunning black-box theatre.

Through workshops and conversations with teams across the theatre, including visitor services and the box office team, we developed our understanding of the organisation. And crucially we talked about audiences, current and prospective. 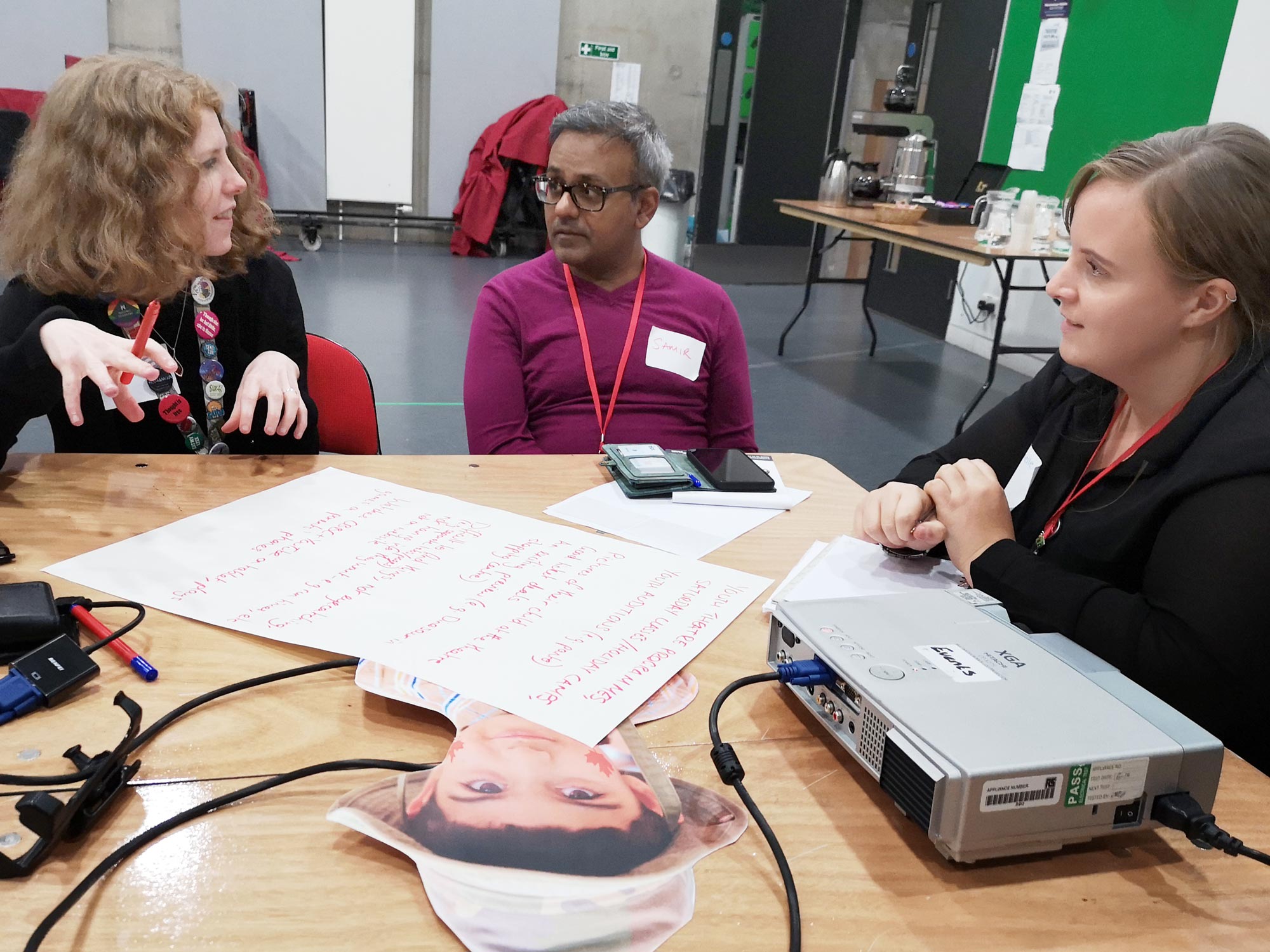 The Belgrade Theatre team, discussing audiences and what they want to achieve through the new website.

We had some really interesting discussions around the growing ambitions of the organisation. Coventry’s year as City of Culture is a real moment to expand the theatre’s reach and scope. And, with the appointment of three new Co-Artistic Directors, the website needed to be able to showcase a broad range of new work, both at the venue and beyond, throughout the community. 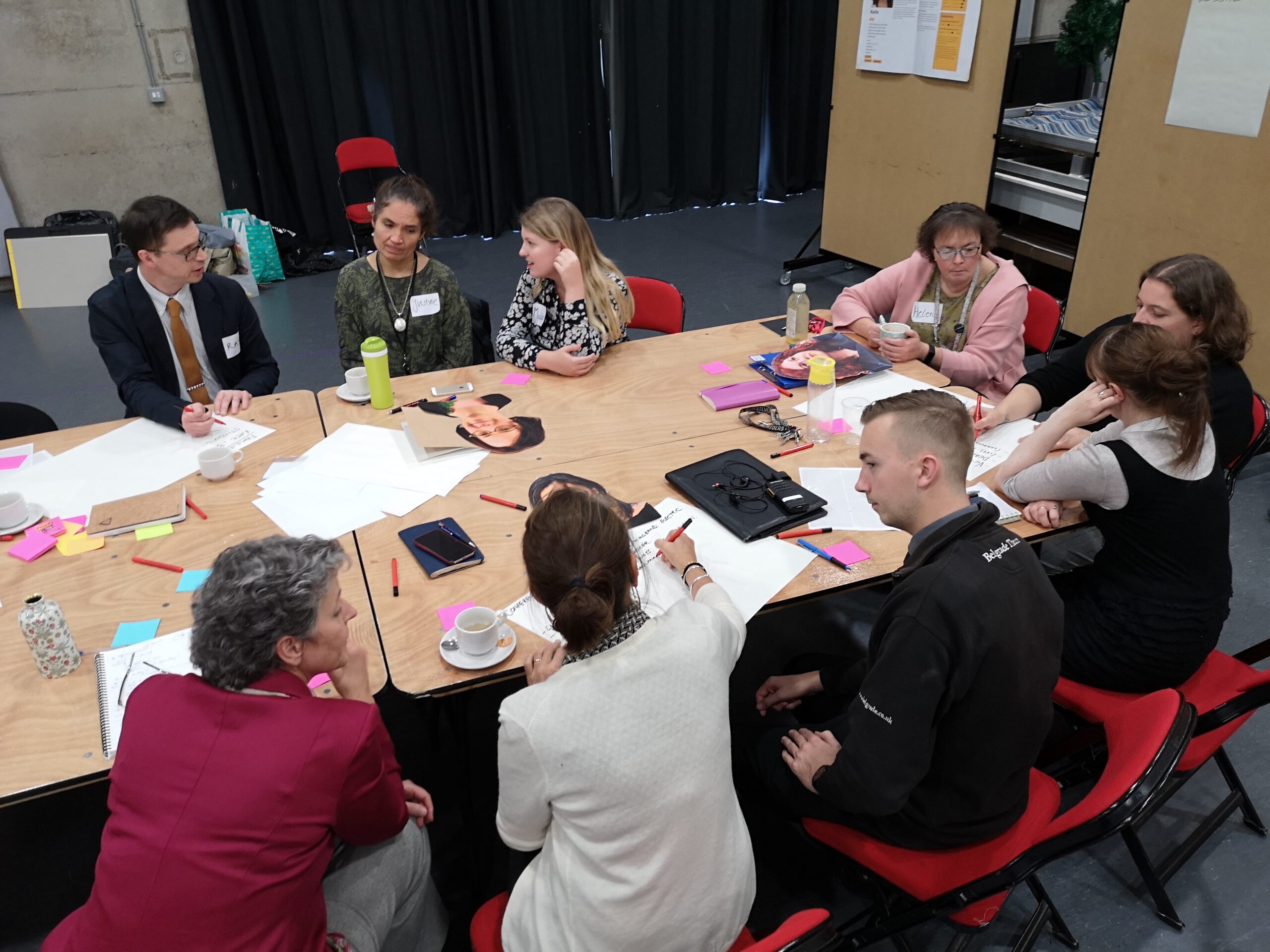 Some of the Belgrade Theatre team at our persona-based workshop.

Our biggest takeaway was that the new site needed to represent a multitude of voices and stories. The site needed to be inclusive and about ‘us’ – audience, artists and organisation all together.

We took that idea back to the studio and put together a suite of designs that allow different people to ‘tell their stories’. This might mean a few audience quotes added to an event, a dedicated page where content can be pooled from across all areas of activity, or a home page with an editorial feel (as shown in the screenshot, below)… 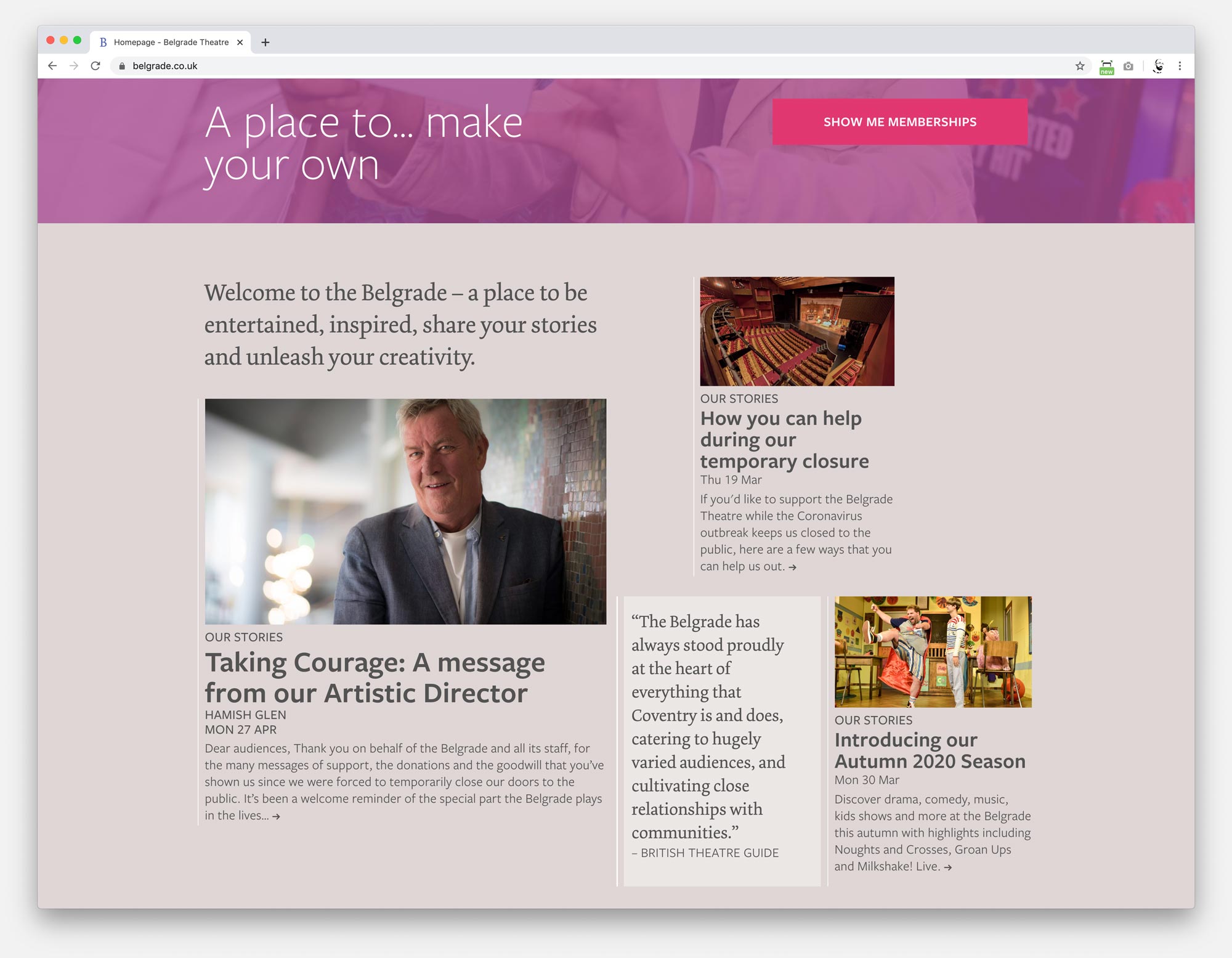 Using this concept as a starting point we set about designing the whole site – for desktop, mobile and tablet screens. We loved how those human voices brought sincerity and authenticity to the content and messaging throughout the site. 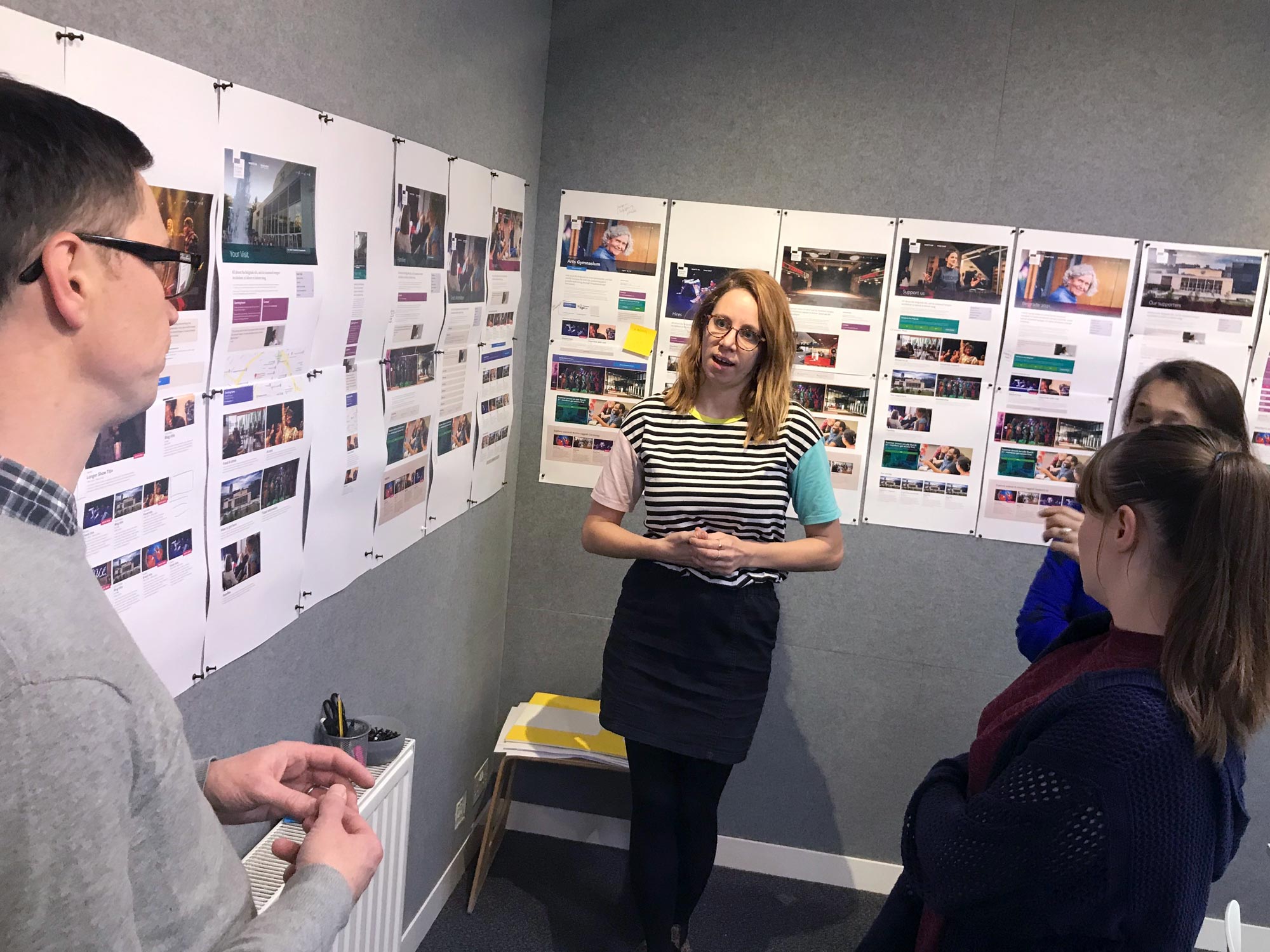 Jen, talking through our designs with the marketing team from Belgrade Theatre.

With a thematic focus in place we were able to turn our thoughts to all of the practicalities that come when working with an innovative team.

The Belgrade is a theatre that focuses on sharing stories with its communities, and it has people at its heart, so it was great that Cog understood that from the start and subsequently brought such a human-centred approach to the technical challenges of redesigning and building our site.

Of course, as a venue, ticket sales and memberships are a priority.

The Belgrade team had been working with their ticketing provider, Spektrix, for many years. They were already using many of their more recent features but their website hadn’t adapted to make the most of those. It was key that we worked closely with the team at Spektrix to use the functionality to its fullest.

Alongside our work on the site, the Belgrade team have introduced a tiered on-sale and ticketing process, with different release dates, prices and discounts available to members.

These changes are clearly communicated, throughout the site, in a way that encourages people to sign-up to support the theatre (and activate their advanced booking privileges and discounts).

We’ve also added season subscription deals for those regular attenders who want to sit in the same seat for numerous performances, and be rewarded for their loyalty.

All of these timed features are automated. Once the event’s on-sale dates are set up in Spektrix they automatically trigger the changes on the website, saving a huge amounts of duplication (and potential for error) for the theatre team. 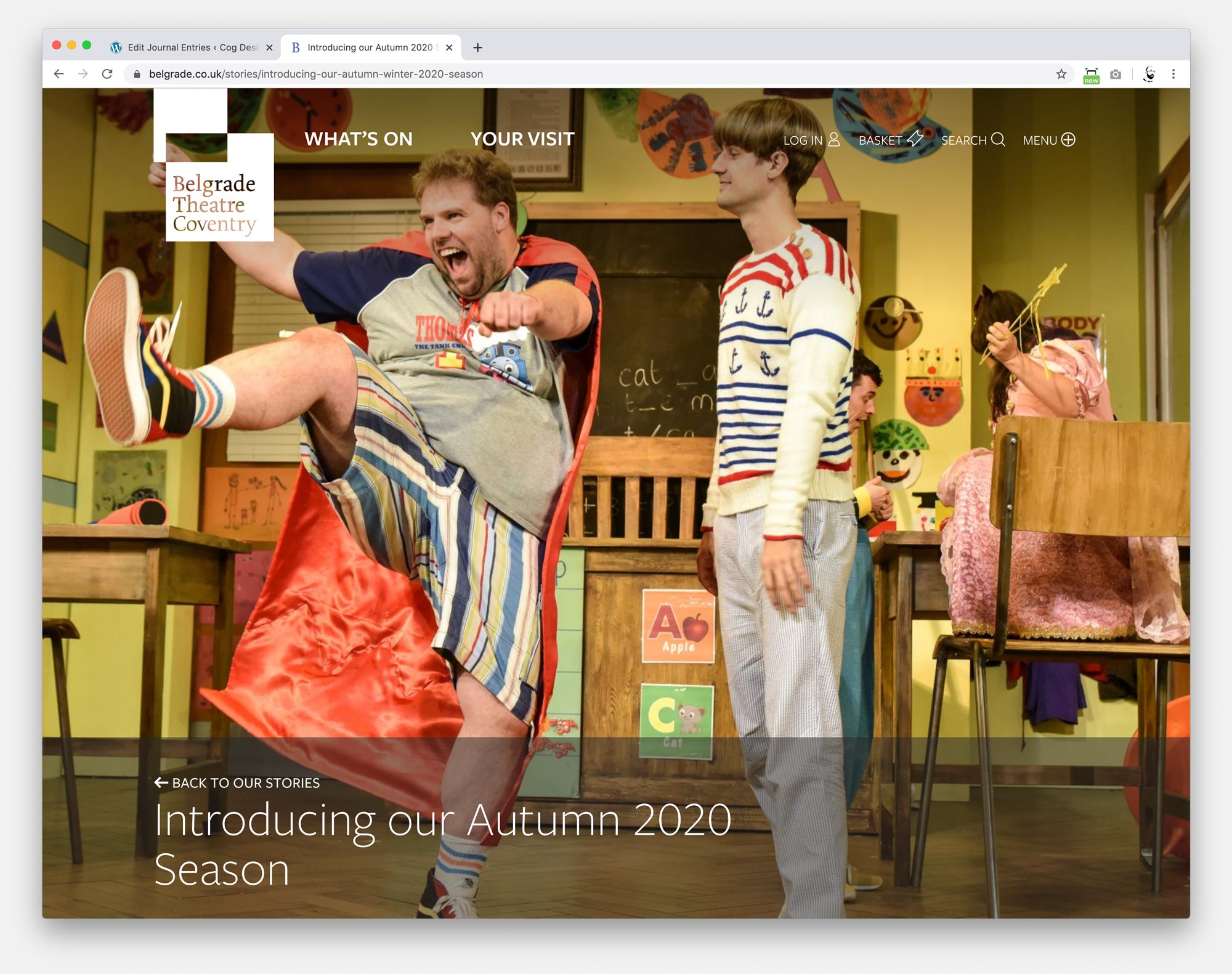 We were due to launch the site to coincide with a big season launch in April 2020.

And then the lockdown happened, the theatres closed and we all had to adapt.

It’s a testament to the flexibility of the site that the Belgrade team were able to adapt the content quickly and get the site launched anyway – adding all sorts of interesting stories and perspectives. 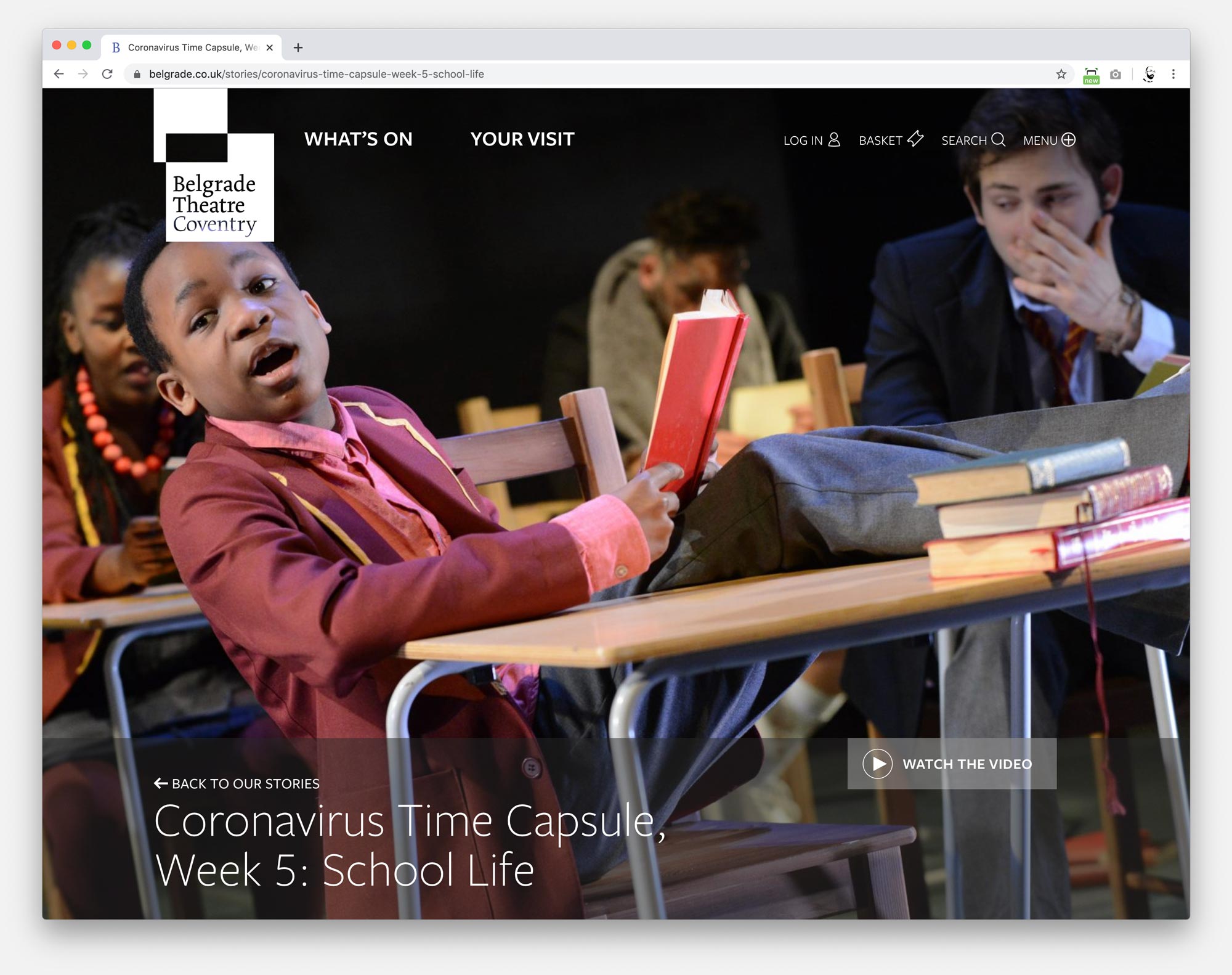 “The Belgrade is a theatre that focuses on sharing stories with its communities, and it has people at its heart, so it was great that Cog understood that from the start and subsequently brought such a human-centred approach to the technical challenges of redesigning and building our site. Their team became our partners, managing the whole process with a smile. We are delighted that the site reflects our personality so well, and we’re really looking forward to continuing to work with the Cog team ”. Ray Clenshaw, Communications Manager, Belgrade Theatre

We look forward to working with the Belgrade team as they emerge from lockdown and get audiences back in their beautiful theatre.

Culture for a changing city. A new website plus a full rebrand of East London’s most… END_OF_DOCUMENT_TOKEN_TO_BE_REPLACED

A new user-friendly website with a custom-designed ticketing process. END_OF_DOCUMENT_TOKEN_TO_BE_REPLACED

Get Into Theatre branding

Branding for a project to address the lack of trained diverse talent within the theatre sector…. END_OF_DOCUMENT_TOKEN_TO_BE_REPLACED