2011 was the year before the bi-centenary of Dickens’s birth. London was awash with exhibitions and events dedicated to the author’s life and works, including our work with Museum of London on their Dickens and London exhibition.

The newly appointed Director at The Charles Dickens Museum had seen our work and approached us about helping to update their branding. 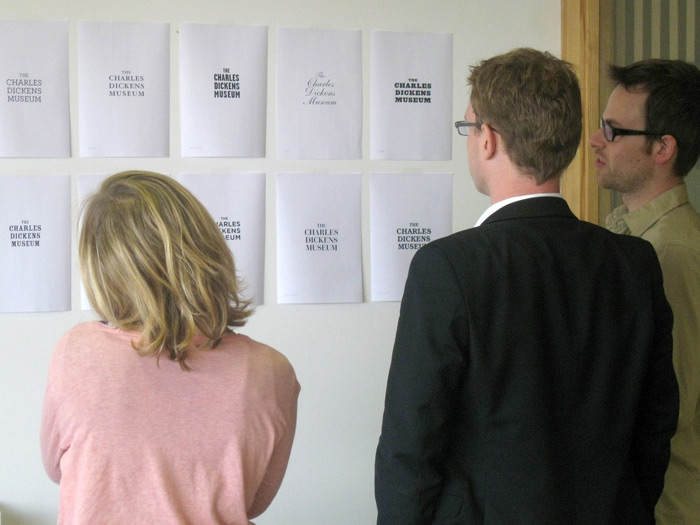 Museum Director, Dr Florian Schweizer on his first trip to the Cog studio.

The brief was an unusual one. The museum wanted to be clearly recognised as the trusted guardians of Dickens’s legacy in order to secure a significant grant from the Heritage Lottery Fund. Success for the project would mean that the museum would be closed for much of the anniversary year.

The existing logo we were given to work with

They had an existing logo (shown above) and a firm desire not to alter it radically.

We set about reworking that logo to better represent the values of the museum. We worked through hundreds of typographic options, settling on an authentic match to those used in Dickensian publications.

The biggest change we made was to replace the address with ‘London’ (using a scan of Dickens’s handwriting). By clearly placing the museum in London, we were able to make it significantly more attractive to tourist audiences, distinct from the various Kent-based attractions with a claim to his legacy. 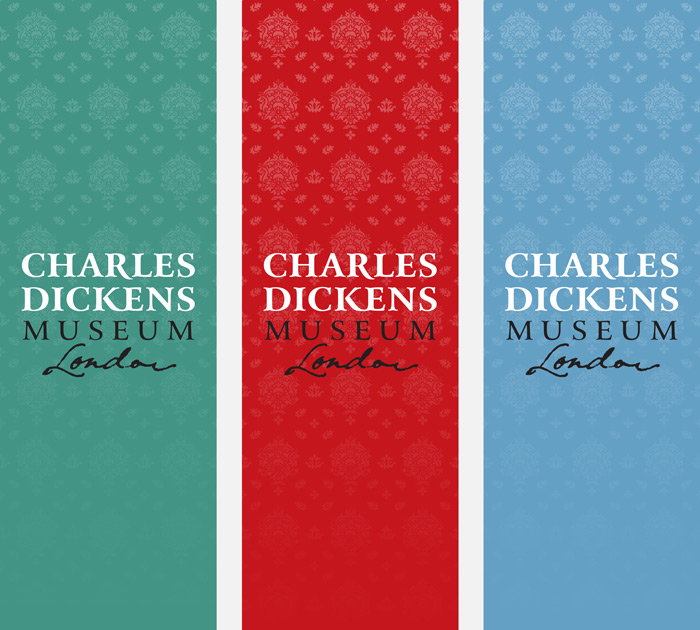 The next step was to give some visual context to the logo. We settled on a palette of three colours that were inspired by the paint and wallpaper of the house; and we also adopted the pattern of that wallpaper within our visual palette. 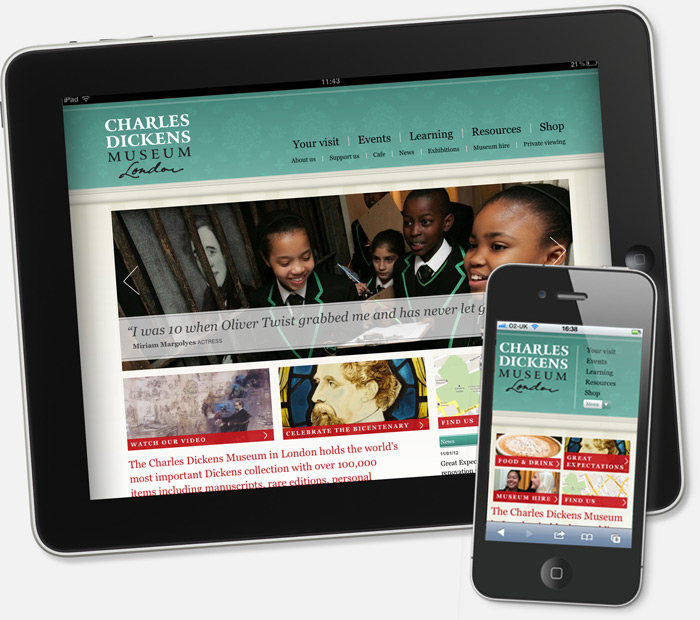 With a full visual identity in place we were able to design and build the museum’s website. It was the first time we’d used WordPress as a content management system, and it was one of our first fully-responsive sites.

The website site was designed to be the public face of the museum, with many more visitors than the house could accommodate (especially if the museum was to close for renovation). 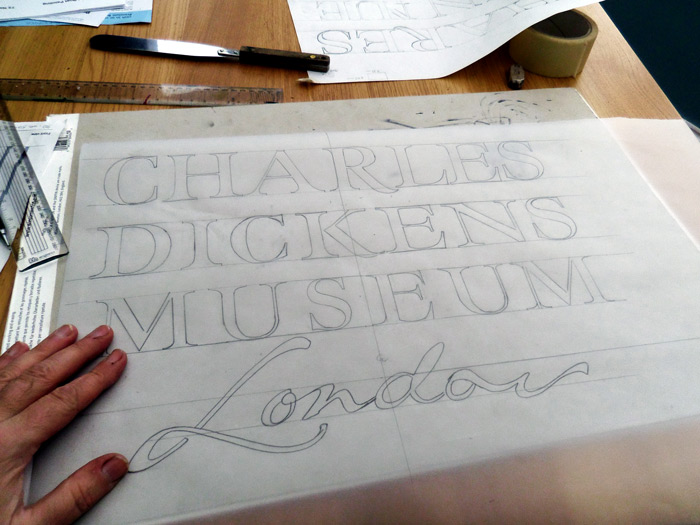 One of the areas that we found most interesting about the project was using traditional craft skills to bring the branding to life.

We found a skilled barge-painter (Martyn King) to hand-render the sign at the front of the museum. Because of the restriction of the conservation area, he constructed a mechanism that allows the staff to bring in the sign each evening. 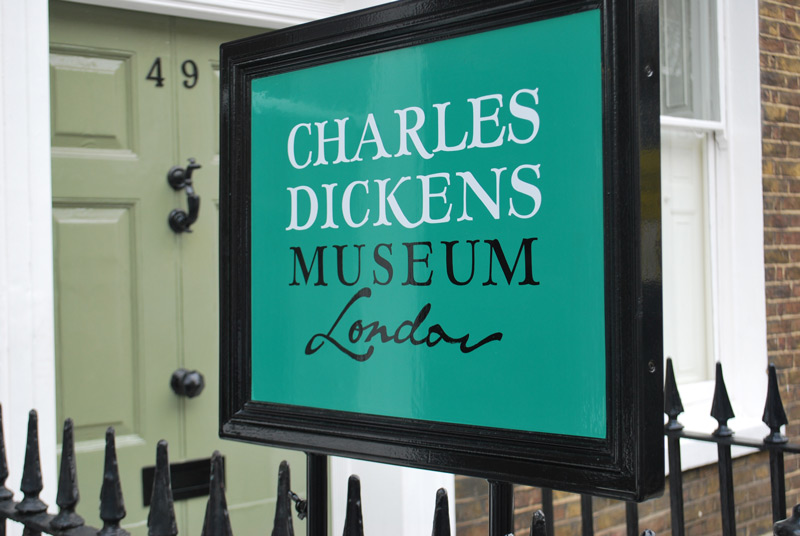 The ‘removable’ sign, in place on the railing in front of the museum.

There are few portraits of Dickens and those that exist are all very different in their styles. So we worked with illustrator, Josephine Sumner, to create consistent looking portraits of Dickens in his youth, middle and older age, which we thought we might use alongside the typographic logo. 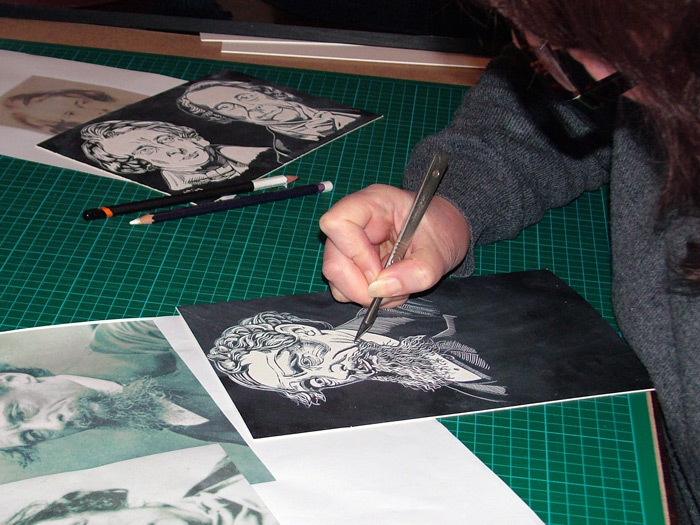 Illustrator Josephine Sumner, using a scratch technique to create her portraits of Dickens.

Although we were pleased with the illustrations, we didn’t feel that they captured the authentic Georgian feel of the museum. So the portraits were set aside, for possible use later on merchandise in the museum shop.

In our pursuit of authenticity, we even went as far as to replace the laminated signs that had been scattered throughout the museum. We commissioned some letter-pressed cards, hand-printed on a traditional press. 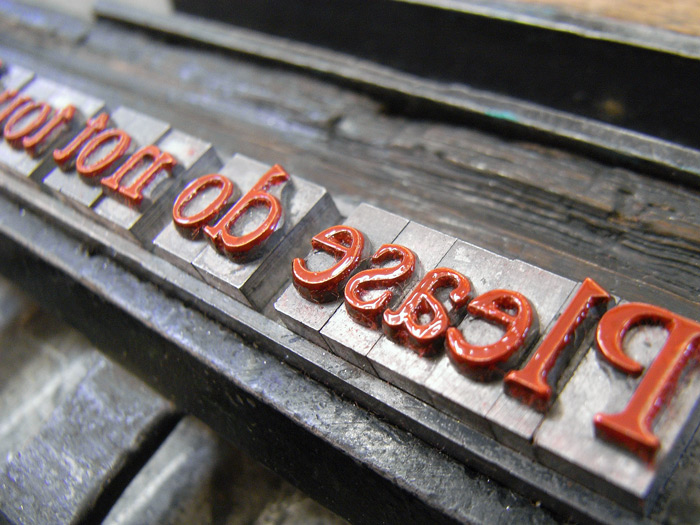 Inked lettering, on the printing press.

It was these authentic touches that helped to change the visitors’ perception of the museum. And we like to think that, combined with the branding and the website, they contributed to the positive decision, by Heritage Lottery Fund, to award the renovation grant. 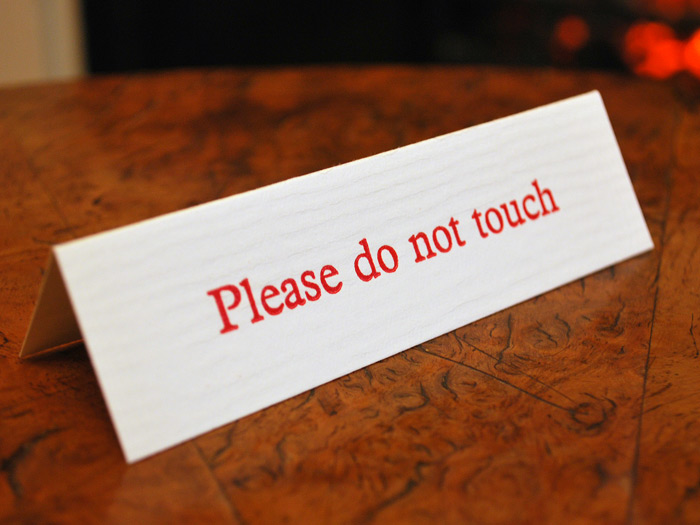 One of our letter-pressed signs, in place on a walnut table.

In January 2012, the start of Dickens’s bicentenary year, the museum’s temporary closure was announced (with much disquiet amongst some academic voices and sections of the press).

We worked with the museum team and their architectural team, to design the hoardings for the building site. The panels explained the extent of the work and did a lot to placate those who might turn up to find the museum closed. 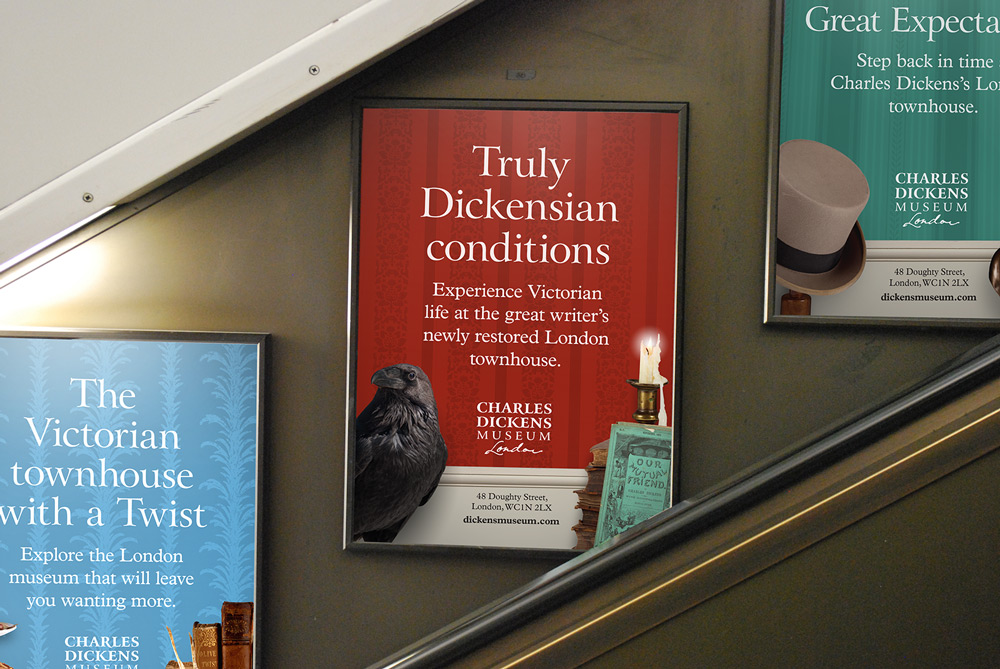 With the museum closed, we began thinking about its reopening. We worked on a large-scale marketing campaign and had a lot of fun with the copywriting challenge. 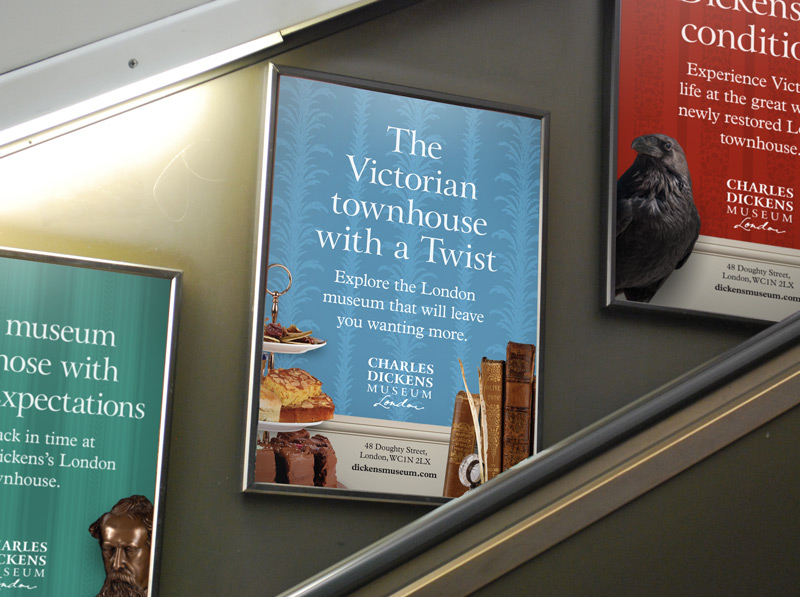 And, with the museum set to reopen in time for Christmas (by far the busiest season for the museum) we worked on a seasonal version of the campaign, for use on cross-track poster on the underground. 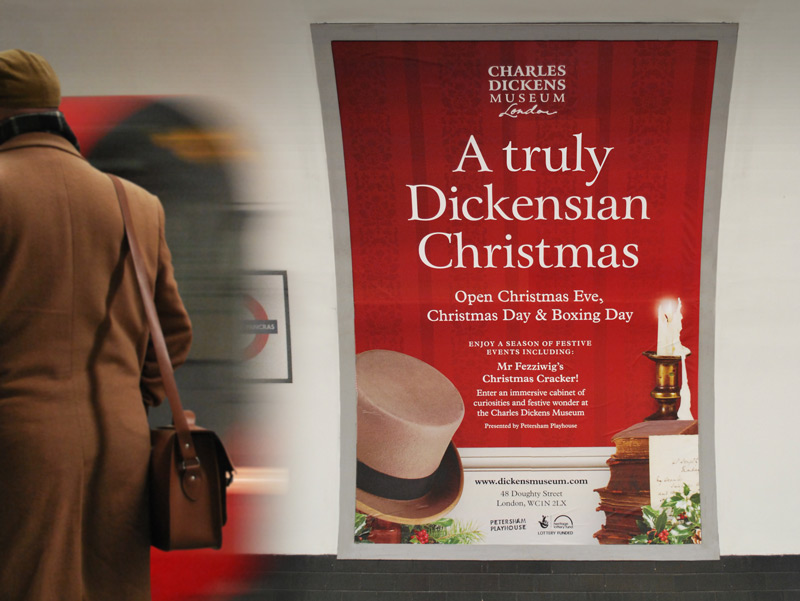 We continued working with the museum after the reopening, providing designs for visitor leaflets, fundraising materials and event-specific communications. 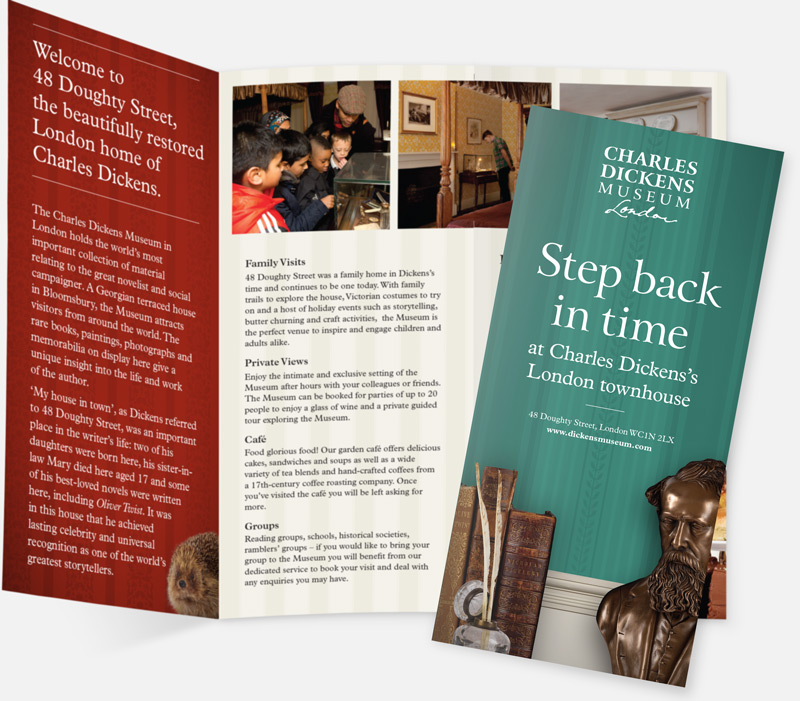 We even got to design this beautiful gold-foiled souvenir gift-book, one of the museum shop’s most popular items in 2013, the year after the reopening. 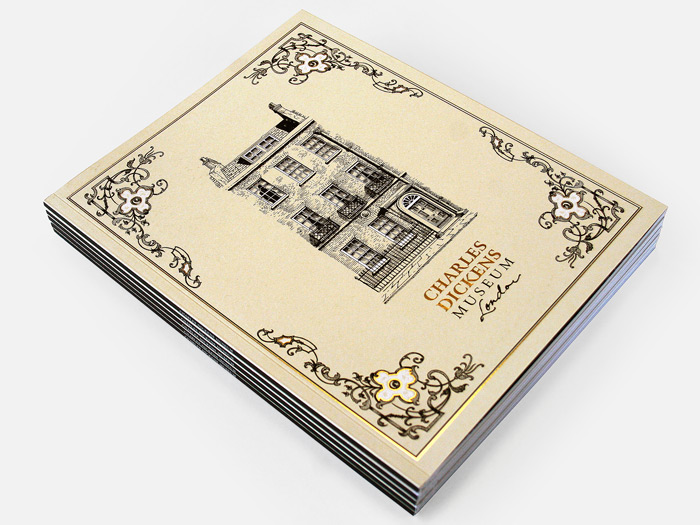 I’m particularly proud of the work we did with the Charles Dickens Museum. This relatively modest house displays a significant collection of Dickens objects, manuscripts and portraits, and is the worthy home to the world’s most significant collection of Dickens artefacts and copyrighted images and written materials. Whilst being sensitive to that history we helped the museum in its transition from a dusty Victorian relic into an exemplary museum of the 21st Century.

Through the first half of his bicentenary, Museum of London hosts a comprehensive exhibition about Charles… END_OF_DOCUMENT_TOKEN_TO_BE_REPLACED

Creating publicity for the first ticketed exhibition at Museum of London Docklands, our brief was to… END_OF_DOCUMENT_TOKEN_TO_BE_REPLACED

For seven years we were the publicity designers for Red Shift Theatre, one of the most… END_OF_DOCUMENT_TOKEN_TO_BE_REPLACED