Under the leadership of Tamara Rojo, English National Ballet has reinvented itself in recent years. But their website had remained largely untouched.

They approached us with an ambitious brief to bring their world-class ballet to the widest possible audience. 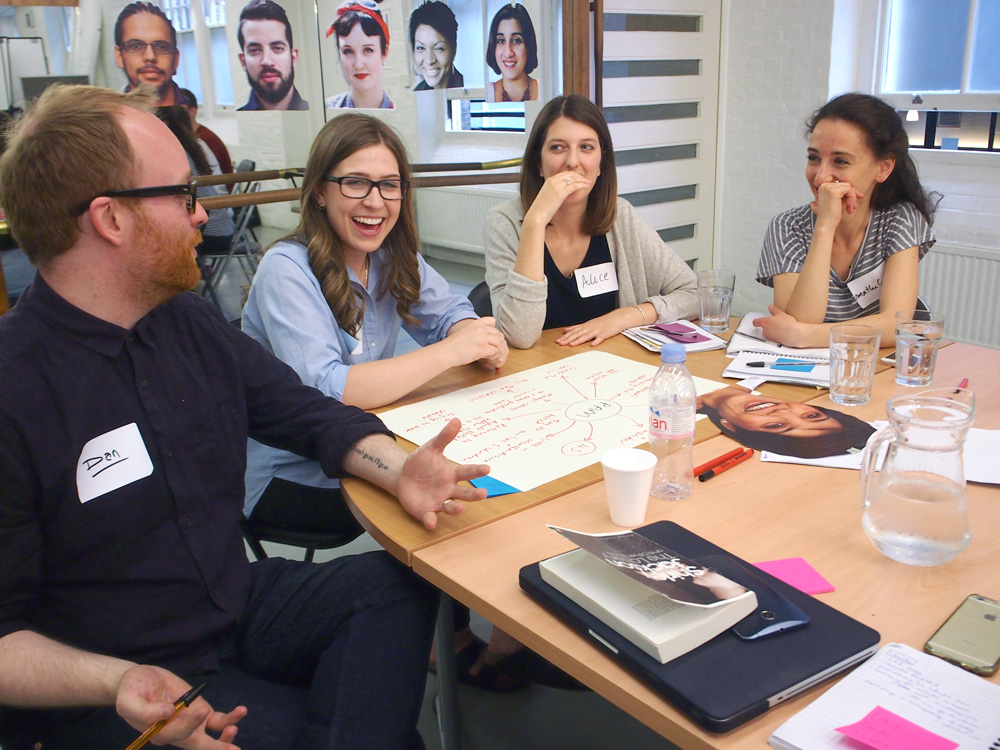 Some of the ENB staff team, discussing the interactions that their audiences have (and would like to have) with their website.

As well as talking directly with senior staff, we convened a workshop with representatives from across the organisation. In an intimidatingly mirror-lined room, we chatted about audiences and the key messages that needed to be conveyed.

Feedback from that workshop, Google analytics, questionnaires and interviews with senior staff all fed into our detailed discovery report. 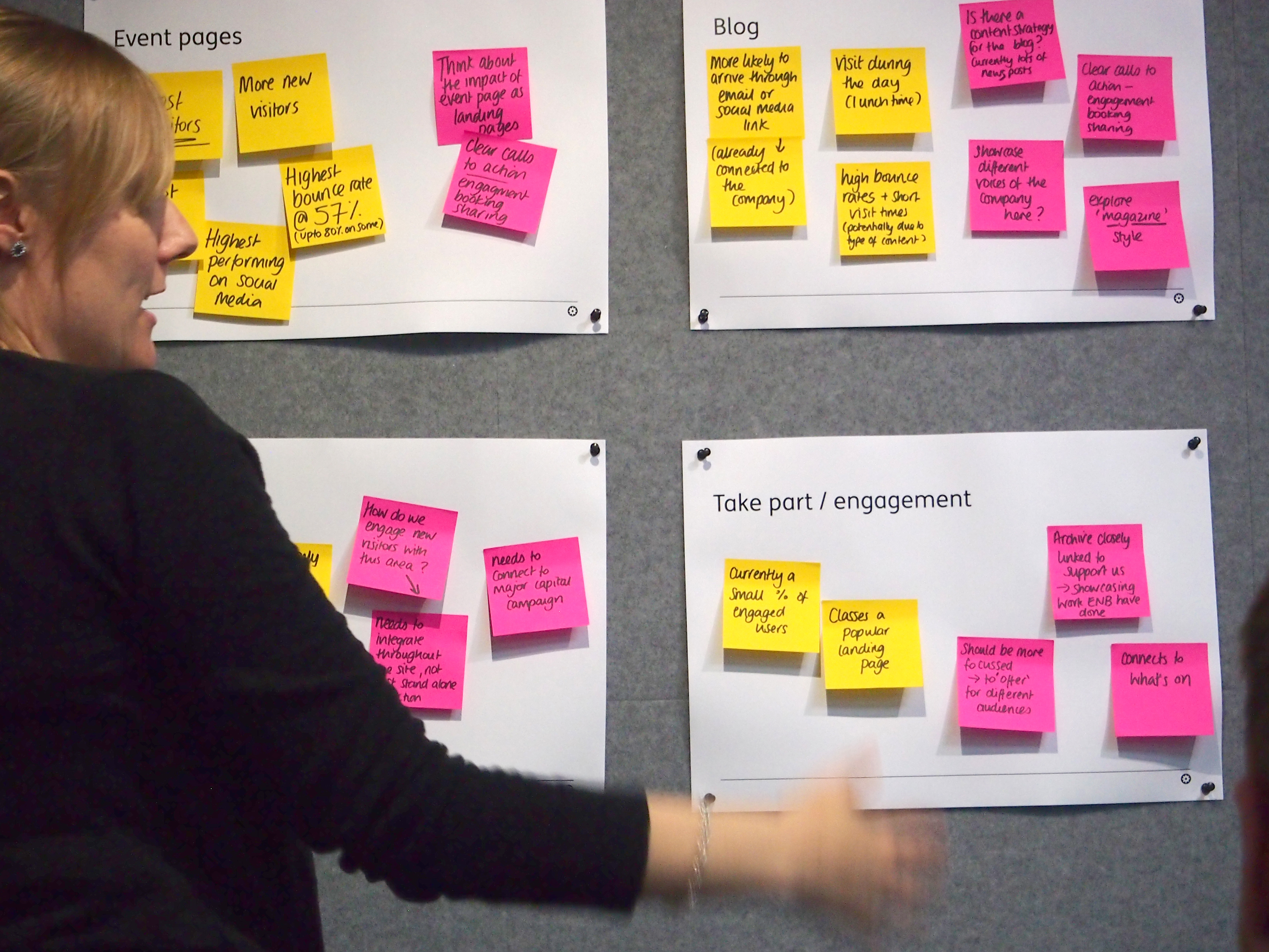 Sam, presenting our research findings to the ENB team.

It was clear from that report that our job was to create a lavish site with ‘performance’ at its core. But the site also had to convey many complex messages, from multiple facets of the organisation, to varied audiences. These include fundraisers with high targets and particular needs; ballet fans with a hunger for detail about each production and every performer; class attendees whose focus is very different to ticket buyers, dancers and orchestra members who see the site as a key promotional platform, etc. 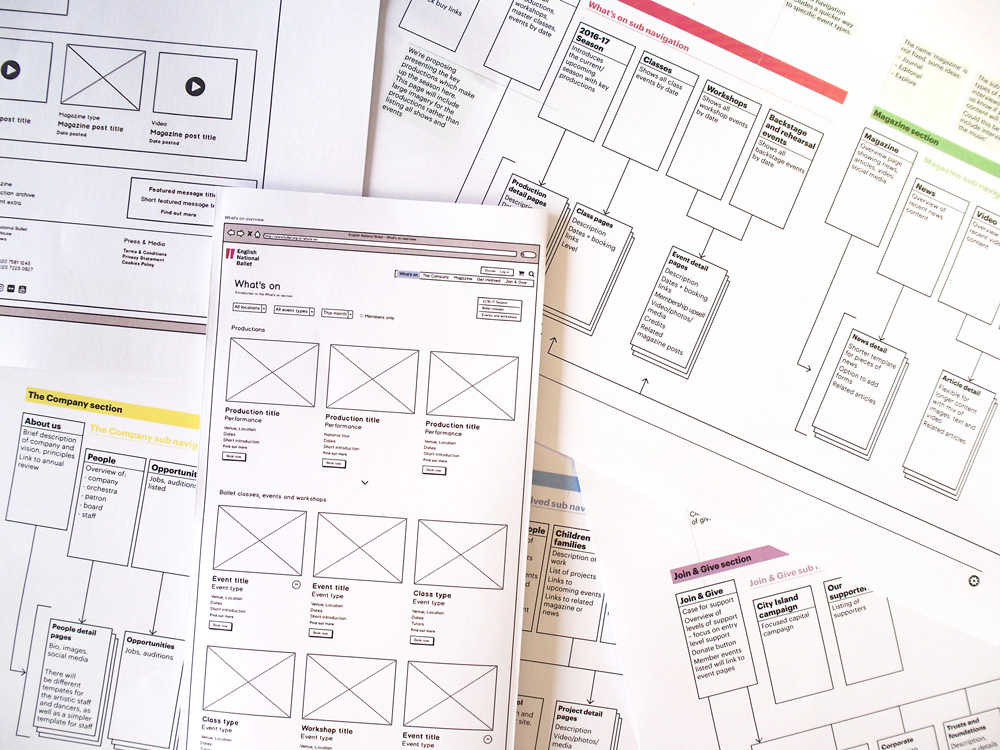 Wireframes and site-plans for the English National Ballet website.

Through structured site plans and wireframes we worked on a structure that would allow us to meet all of these objectives. 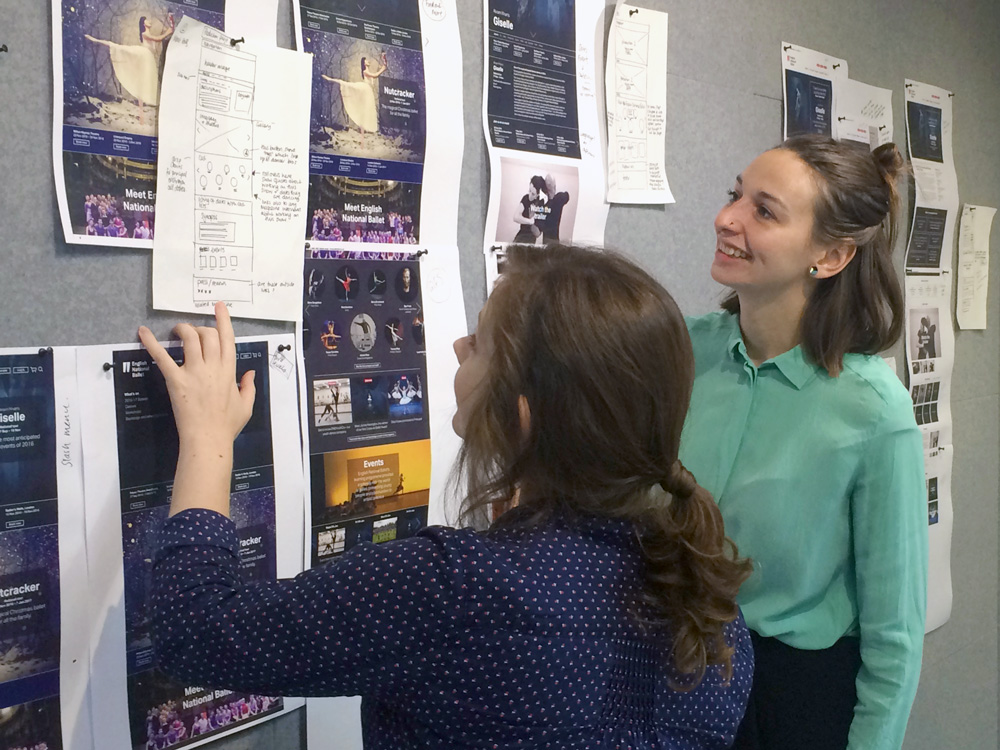 With the firm foundations in place we were ready to start creating visuals. Of course, the gift for us was that ENB have such fantastic imagery to work with, and were open to discussions about pushing that imagery even further with the prospect of creating animated marketing images for future productions. 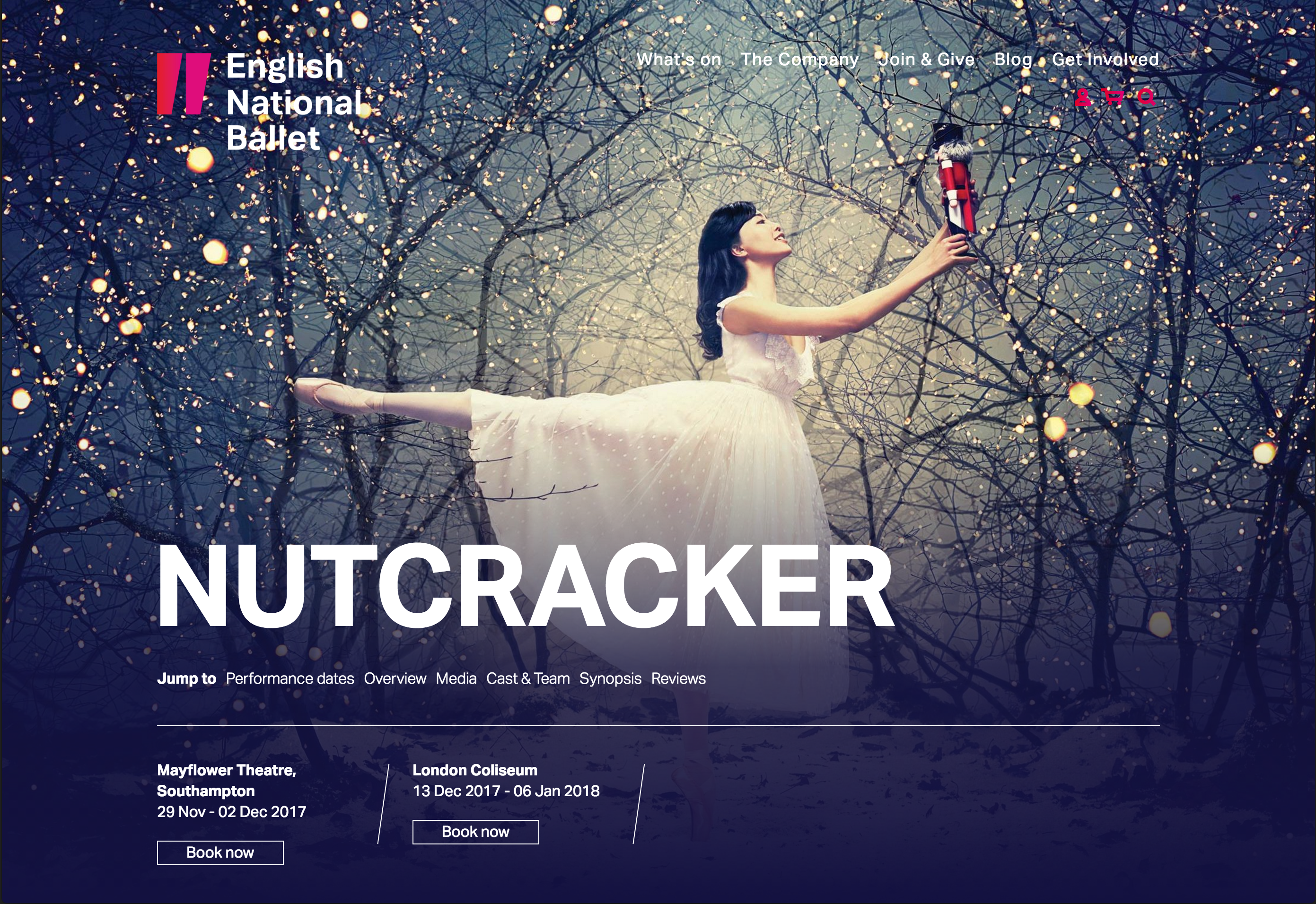 Through our analytics research we found that (because social media is such a key part of their communication strategy) event detail pages are particularly important landing points on the site. We designed these pages to have the impact you might see on a traditional website home page, with large headings and full screen video or imagery. And, of course, the techniques had to be as impactful on mobile screens as they are on the desktop versions. 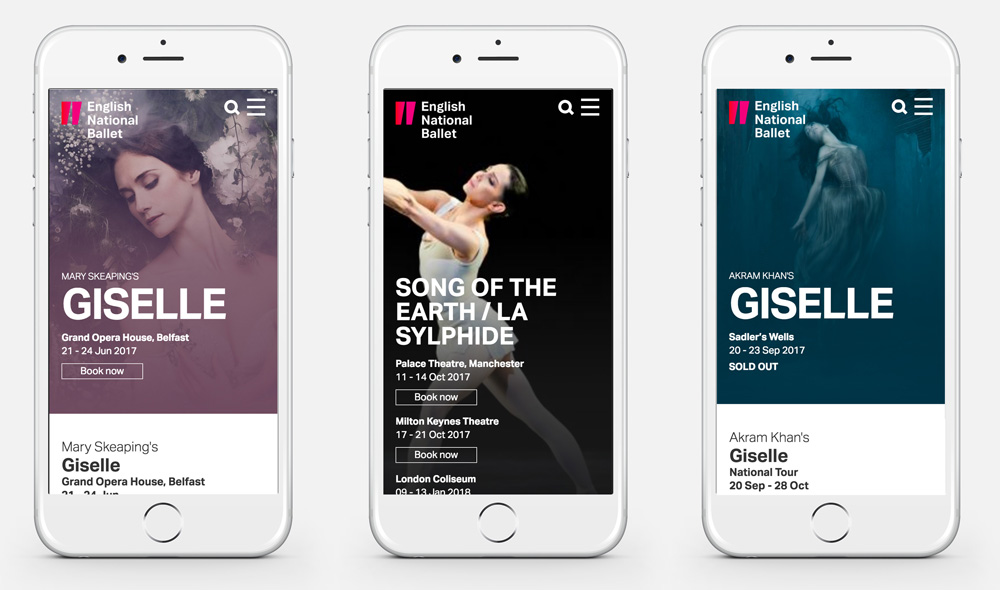 It was great to work with a client with such ambition. They really pushed us to incorporate as much movement as possible to every area of the site. 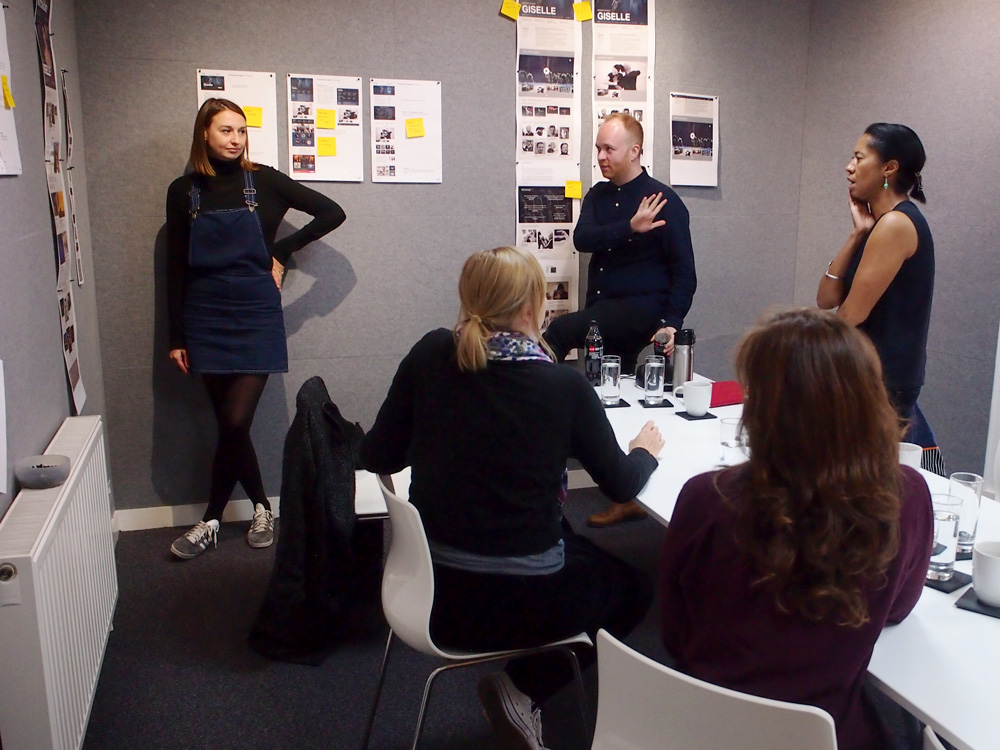 Discussions at the Cog studio as Anna presented early visuals of the website to Dan and Heather from ENB.

Alongside a new magazine-style blog, and subtle text and page transitions, we also introduced huge imagery and video, working in partnership with the ENB marketing team so the site is ready to accommodate future promotional campaign materials.

As a touring company, ENB need their site to act as a virtual venue. The ambition is to attract a loyal audience to return to the ENB site, by creating an experience rather than a simple portal for ticket buying.

Of course, ticket sales are important and, as ENB don’t currently sell their own tickets, the site provides quick links directly to each venue’s ticketing system. And we built in a simple data-capture form as a helpful reminder that visitors are moving to another site – this encourages continued contact and clarifies confusion that our research shows had existed previously.

The site is full of great features (do take a look). One of our favourites is this fundraising slider. As with most arts clients, ENB have ambitious targets for fundraising and loyalty schemes. This slider allows visitors to choose an amount to give. Depending on the level they choose, they are then taken to a tailored page with differently targeted communications.

We’re also really proud of the History section which houses a huge amount of content and full screen images, spanning ENB’s impressive history since being founded (as the London Festival Ballet) in 1950. 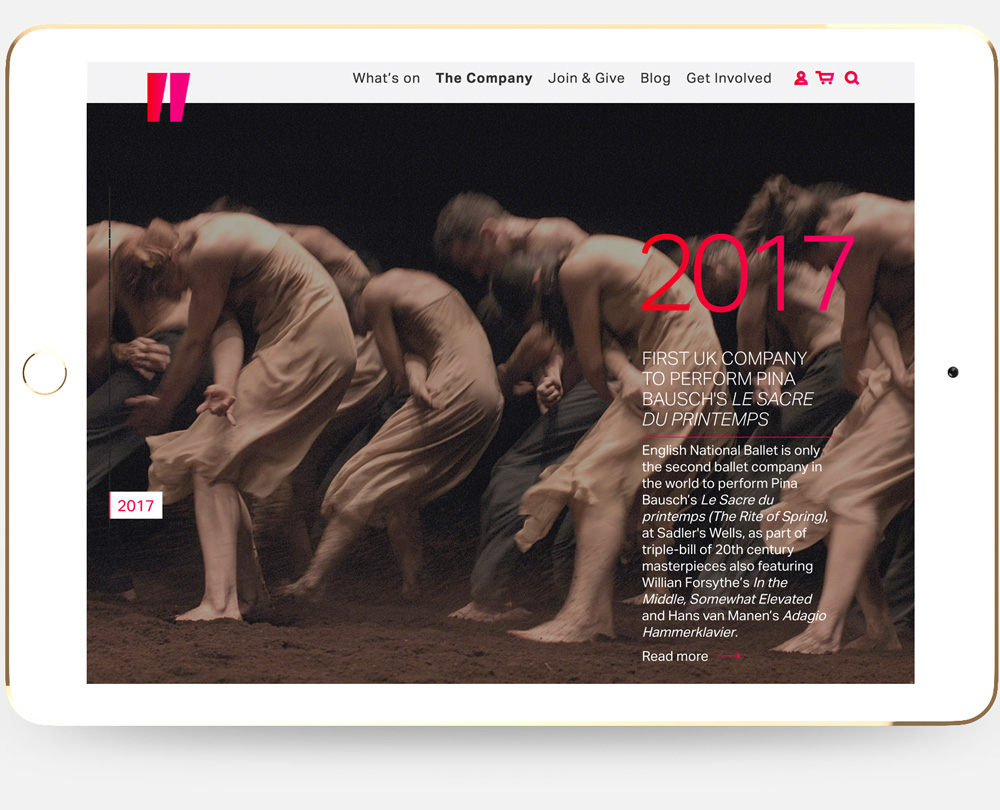 We’ve worked hard in the background to fully optimise the site. Despite the complex transitions and huge images and video, the site performs well and pages load swiftly. And all of the enhanced features and content types have also been carefully considered and implemented on mobile screens. 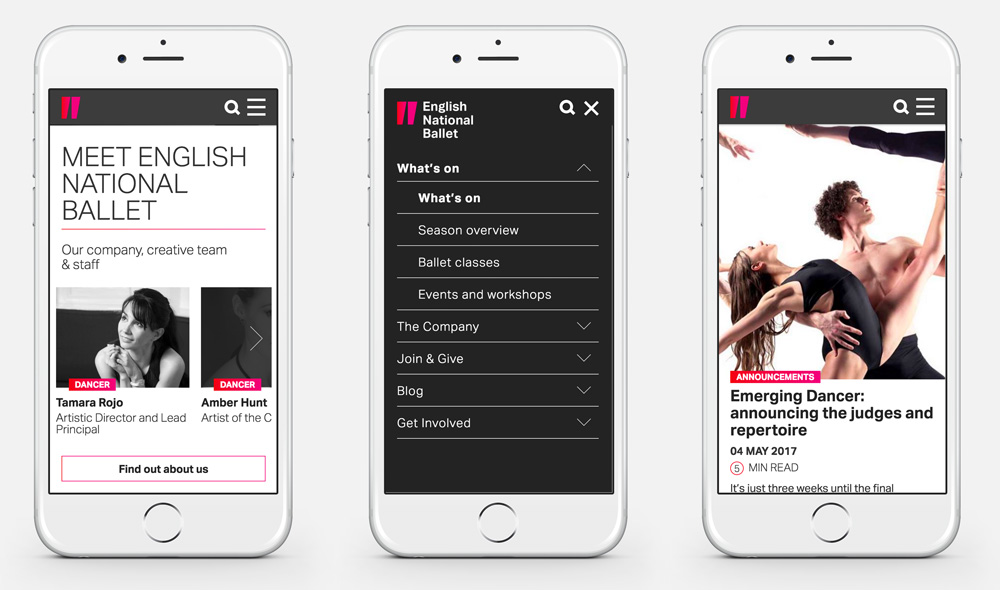 Launching the site isn’t the end of the project. We are already planning the next stage of integrations and we’re chatting about further enhancements to their digital offer. We’re really looking forward to continuing the journey to help English National Ballet to bring their world-class ballet to the widest possible audience. 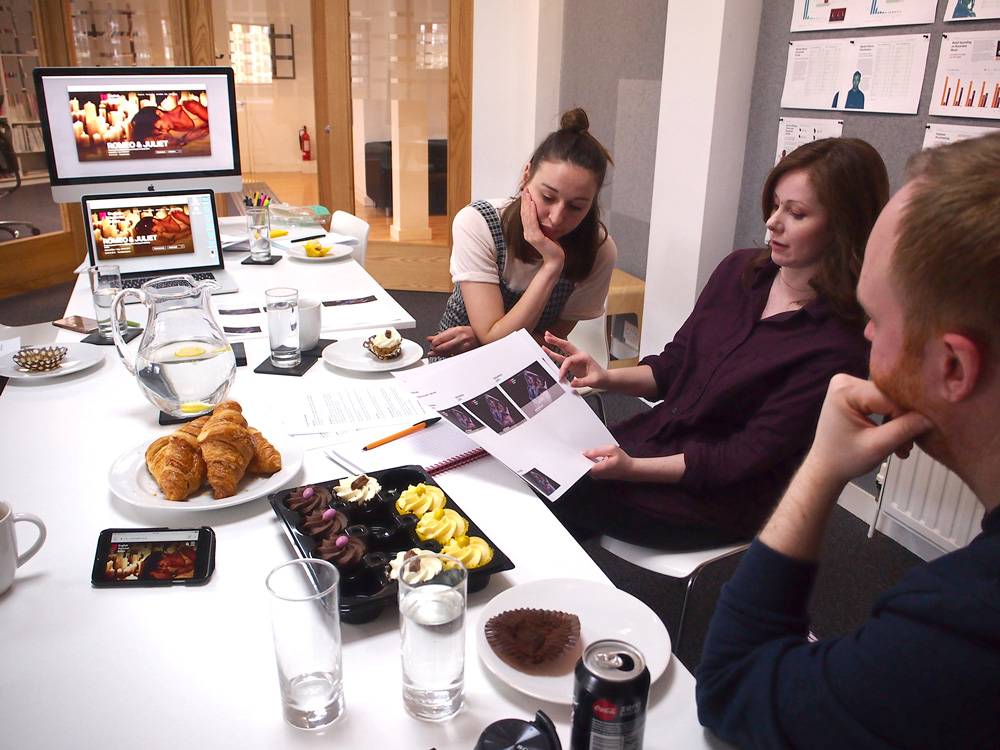 Croissants and cake for a post-launch debrief in our studio.

We’re running a workshop at English National Ballet. The mirrored room is a bit intimidating. END_OF_DOCUMENT_TOKEN_TO_BE_REPLACED