The Comedy Store is the iconic home of live comedy in the UK.

In the 1980s the venue in London’s West End launched the careers of the likes of Dawn French, Jennifer Saunders, Jo Brand, Paul Merton and Rik Mayall (to name but a few).  They built on London’s success and opened a second venue, in Manchester, in 2000.

Since then both locations have hosted some of the UK’s funniest household names, been home to regular improv nights (by the internationally famous Comedy Store Players), and been a proving ground new talent.

In an ever competitive climate, The Comedy Store team realised they couldn’t alway rely on their history to attract people (audiences and comedians) through their doors. They came to us with a brief to radically overhaul their website and to build a bespoke ticketing system (hooked in to Spektrix) with up-selling and packages built in to the logic.

As always, we began the project with a phase of Discovery. We began with a series of in-depth conversations with the London and Manchester teams about their ambitions for the project.

It was fascinating to learn about the different audiences in London and Manchester on different week nights and across different times of the year.

And it was insightful to hear each team talk about their very specific ticketing needs and audience management needs – Manchester uses coloured wrist-bands to locate pre-show audiences in a huge venue with multiple catering options and a separate theatre space; London is much more self-contained offer with a bar and pizza oven to the side of the performance venue. 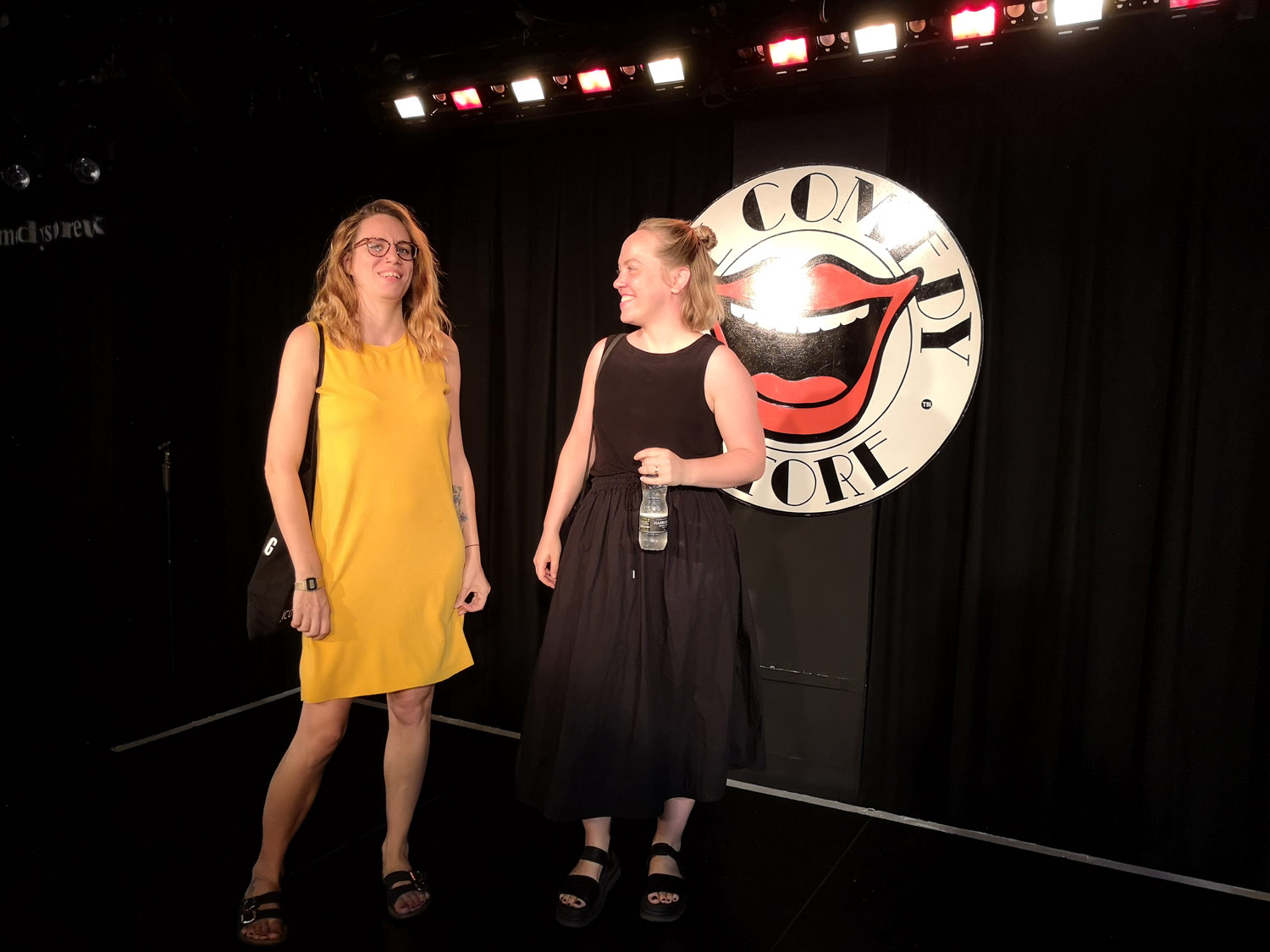 Jen and Claire, on the venue’s famous stage.

It was important to us to get a sense of what a night out at one of their venues was like too. So our whole team went to one of their ‘Best of Stand Up’ nights. It was a great night out. Not only did we enjoy some fantastic comedy, we also had a chance to visit the bar, and try their pizza. These add-ons would be a really important part of the new booking paths we’d be designing. 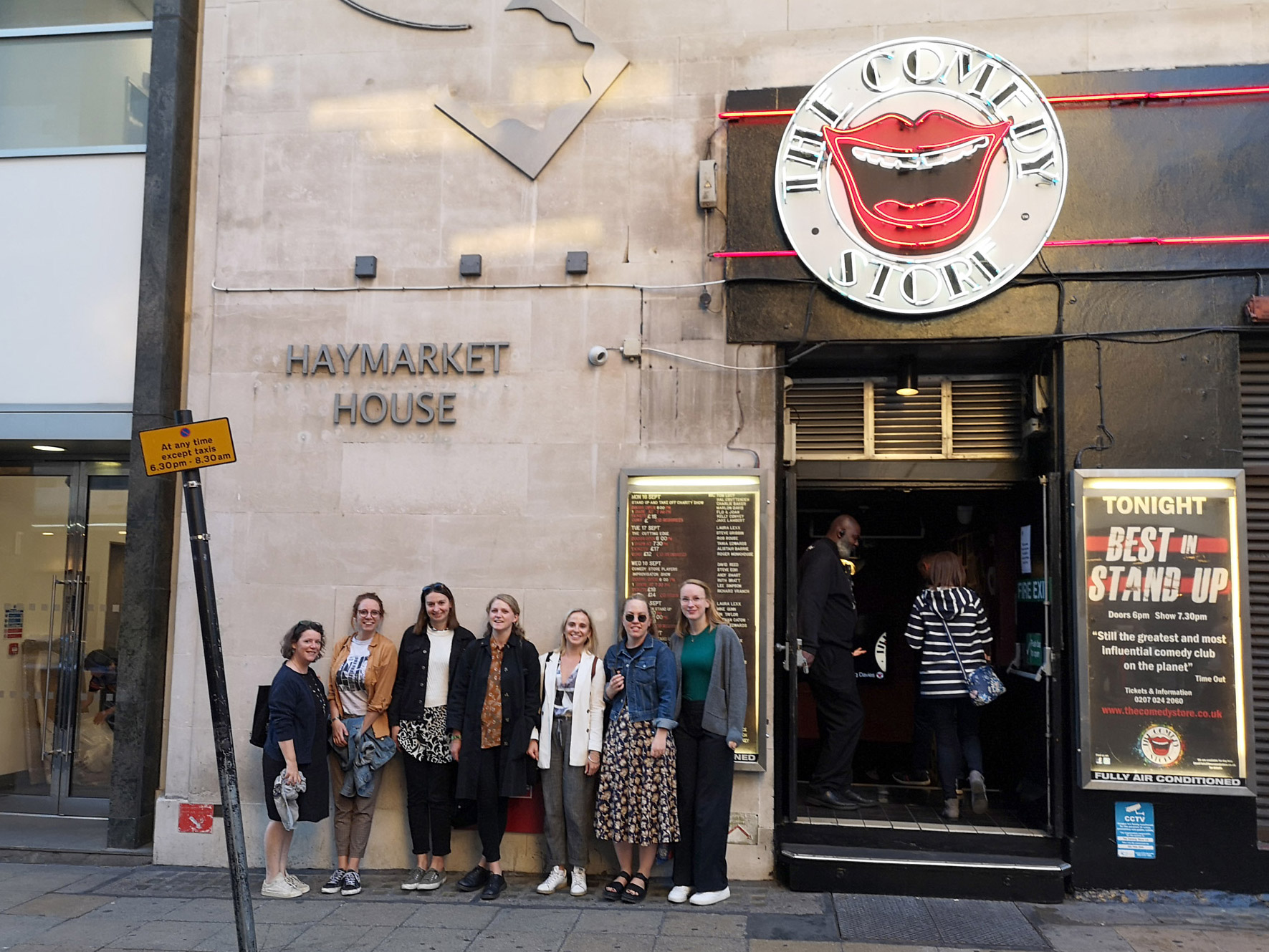 The Cog team, ready to go in to The Comedy Store in London.

The discovery process helped us to understand The Comedy Store’s audiences. From a Saturday night tourist crowd to the regulars of their monthly shows, they needed a website that captured the excitement of the great night out, whilst still giving clear information about the shows. And, of course, they want to entice audiences to upgrade their seats, pre-book their drinks, pre-order food and sign-up for special offers. 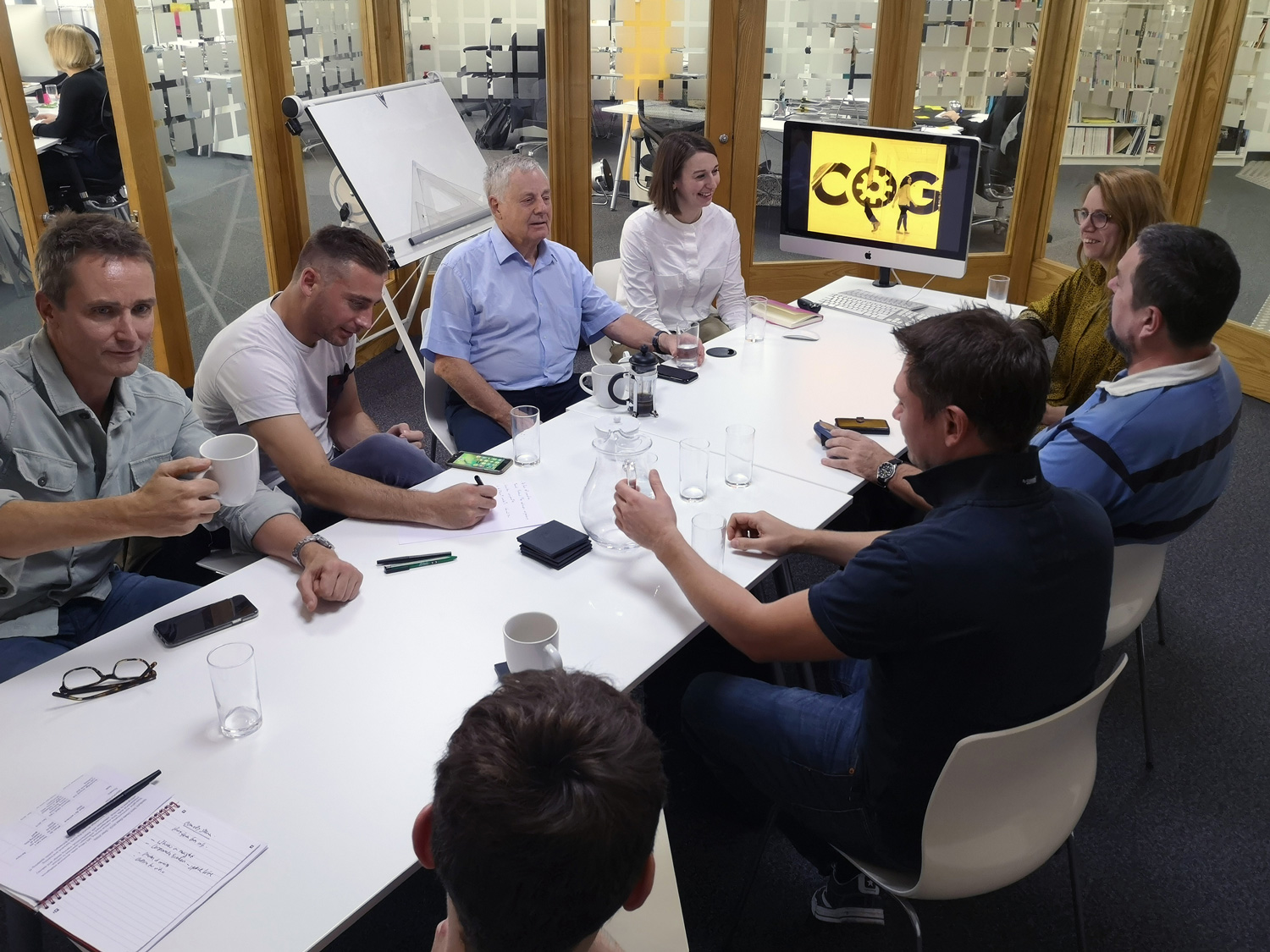 The teams from Manchester and London, visiting the Cog studio to discuss our designs.

The Manchester venue offers lots of options – a full restaurant, a bar snacks menu along with different upgrades for premium seating, and even an area for private parties. There’s so much on offer that it would be easy to overwhelm audiences. We knew we needed to be cautious of that.

Taking what we’d learnt from the discovery process, we set about designing a site that captured the buzz of both venues and the excitement of live comedy.

Since the two venues have their own distinct character, we created a landing page that directed visitors to bespoke homepages for the London and Manchester venues.

We designed a site that’s snappy and clear, capturing the thrill of a night of live comedy, clearly displaying the events on offer (in a format that looks great as a mobile site too), and making the booking process as simple as possible.

The Comedy Store’s move to use Spektrix as their ticketing provider gave them some great options for their merchandise and food offers. However it became clear that the ‘out-of-the-box’ set up (using iframes) wasn’t going to be flexible enough for what they needed.

So we set about creating a custom booking path using the Spektrix API, including iframes once the complex selection process is complete. 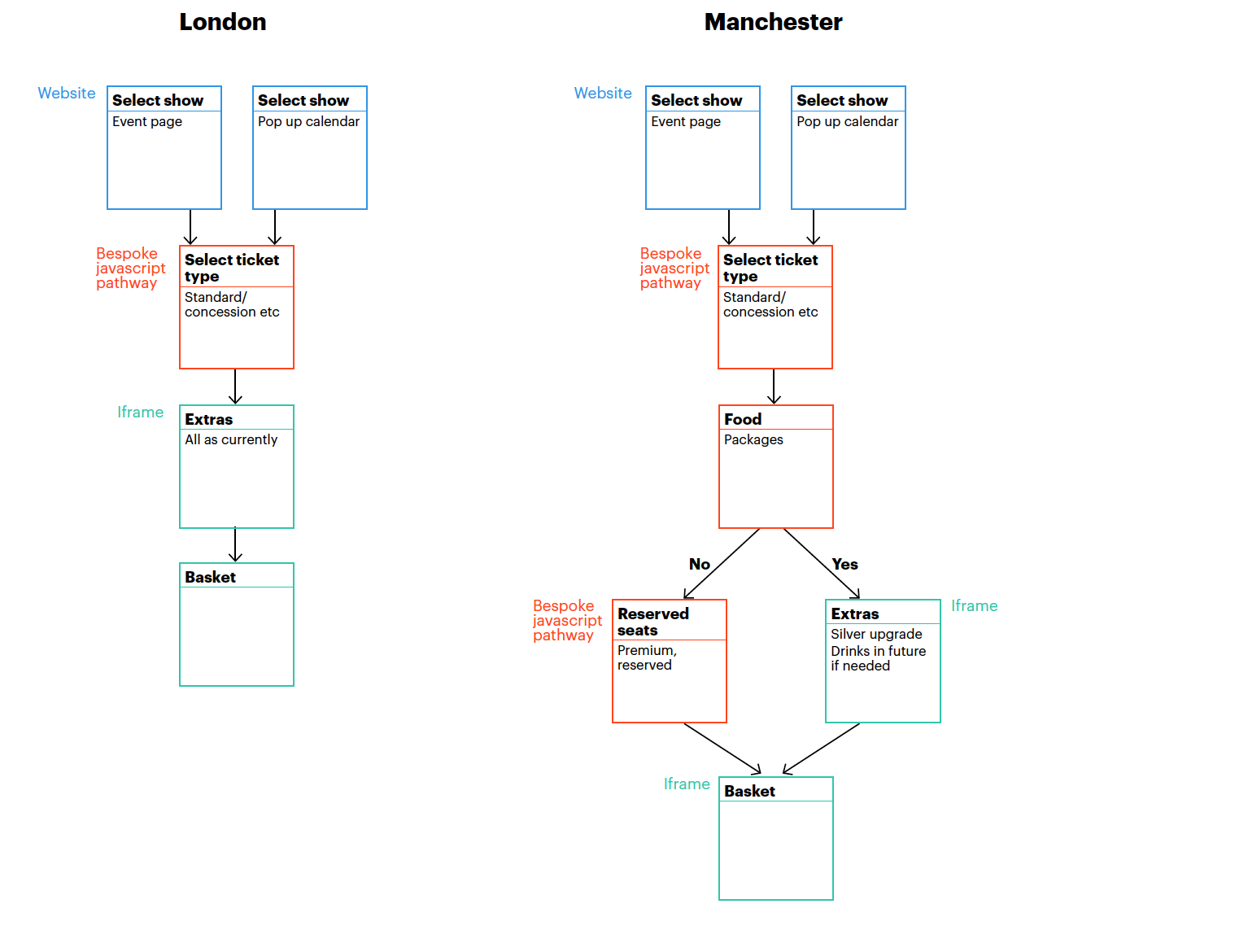 In Manchester, for logistical reasons, users are offered different seating options depending on their food choices. For example, reserved seats might be available, but only if that customer hasn’t pre-booked food.

The structure and development was complex because we wanted to make that booking process as simple as possible for users. We summed it up with an ‘easy booking’ block to show audiences how to put their night together in three simple steps. 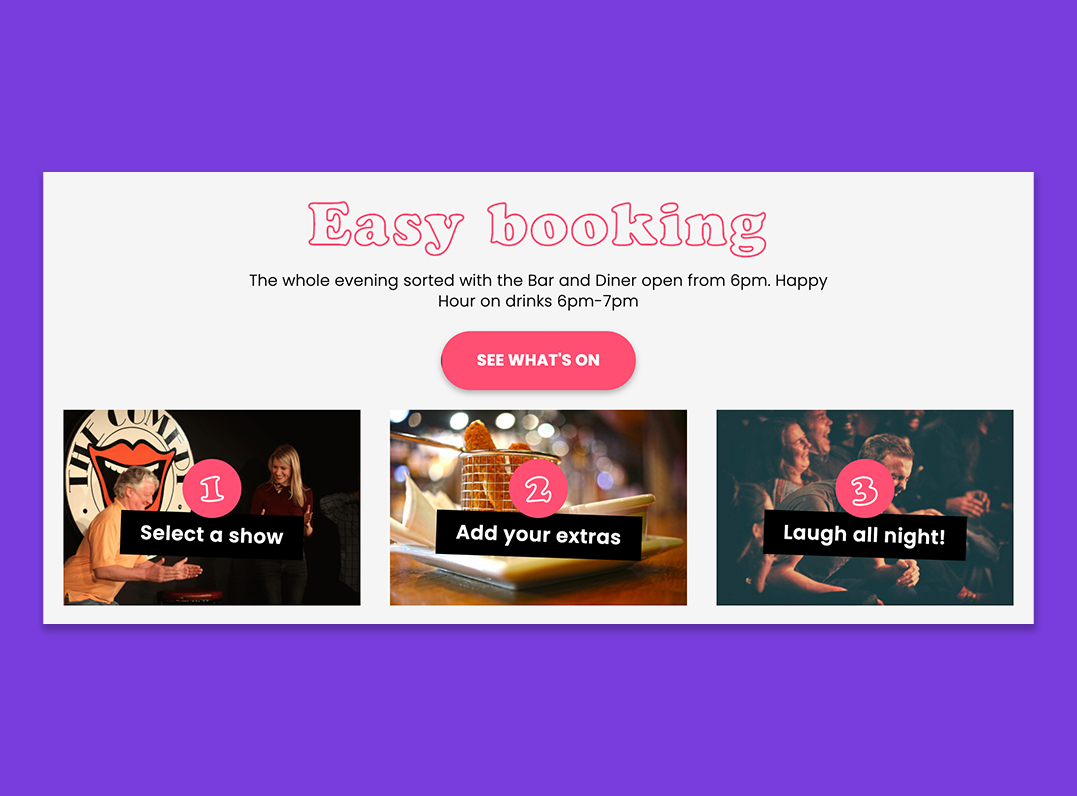 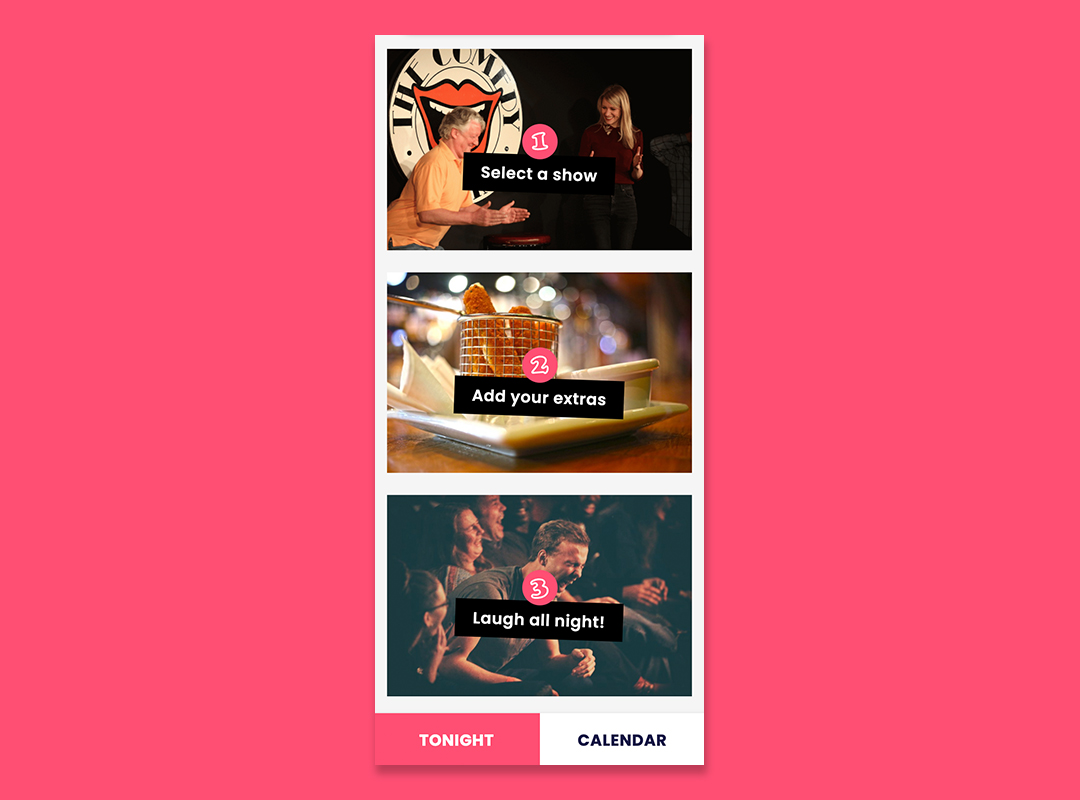 Using our custom Spektrix API components, our developers built and tested the site across desktop, tablet and mobile.

Deploying the site across different mobile devices was particularly knotty but we love that sort of challenge. And, as mobile booking is so important, it was particularly satisfying to gradually unpick the problems to create the perfect solution.

We launched the site in March, a couple of weeks before the UK-wide lockdown.

Whilst unfortunately audiences haven’t been able to visit the venues in person to get the experience we captured across the site, we’re pleased that the flexibility of the site has allowed the Comedy Store team to adapt it for their changing needs and increasing online content that they’ve been so reactive in putting together.

“The Cog team visited our venues (in Manchester and London) and made everyone feel involved. They guided us through what might otherwise have been a complex and intimidating undertaking. They balanced our history with an audience-focused process; the site captures the essence of why people come to live comedy at the Store. And they turned our complex booking procedure into a simple, intuitive online interface. We couldn’t be happier.”
Sébastien Ward, Director, The Comedy Store

Our September Cog night was a trip to Leicester Square’s legendary The Comedy Store. It was… END_OF_DOCUMENT_TOKEN_TO_BE_REPLACED

Bringing a much loved TV gameshow to life. A new website and smarter ticketing system for… END_OF_DOCUMENT_TOKEN_TO_BE_REPLACED

Culture for a changing city. A new website plus a full rebrand of East London’s most… END_OF_DOCUMENT_TOKEN_TO_BE_REPLACED