We loved working with Cog on our campaign image for The Glee Club. They were both flexible and extremely creative when it came to the concept and they worked collaboratively to find something that would suit the different venues and partners within our tour.

We’ve always been fans of Out of Joint Theatre so we were thrilled when they approached us to produce designs for their national touring revival of Richard Cameron’s The Glee Club.

An added bonus was that The Glee Club had been the opening show at Cast in Doncaster, when that new venue opened with our naming and branding. And Cast was to be the opening venue for this new production.

The Glee Club is a raucous comedy about masculinity. It’s the story of a group of miners at a pivot-point in British history.  In the Summer of ’62, five hard-working, hard-drinking miners and a church organist, prepare for the local gala. At least one of them has a secret that the others struggle to understand. 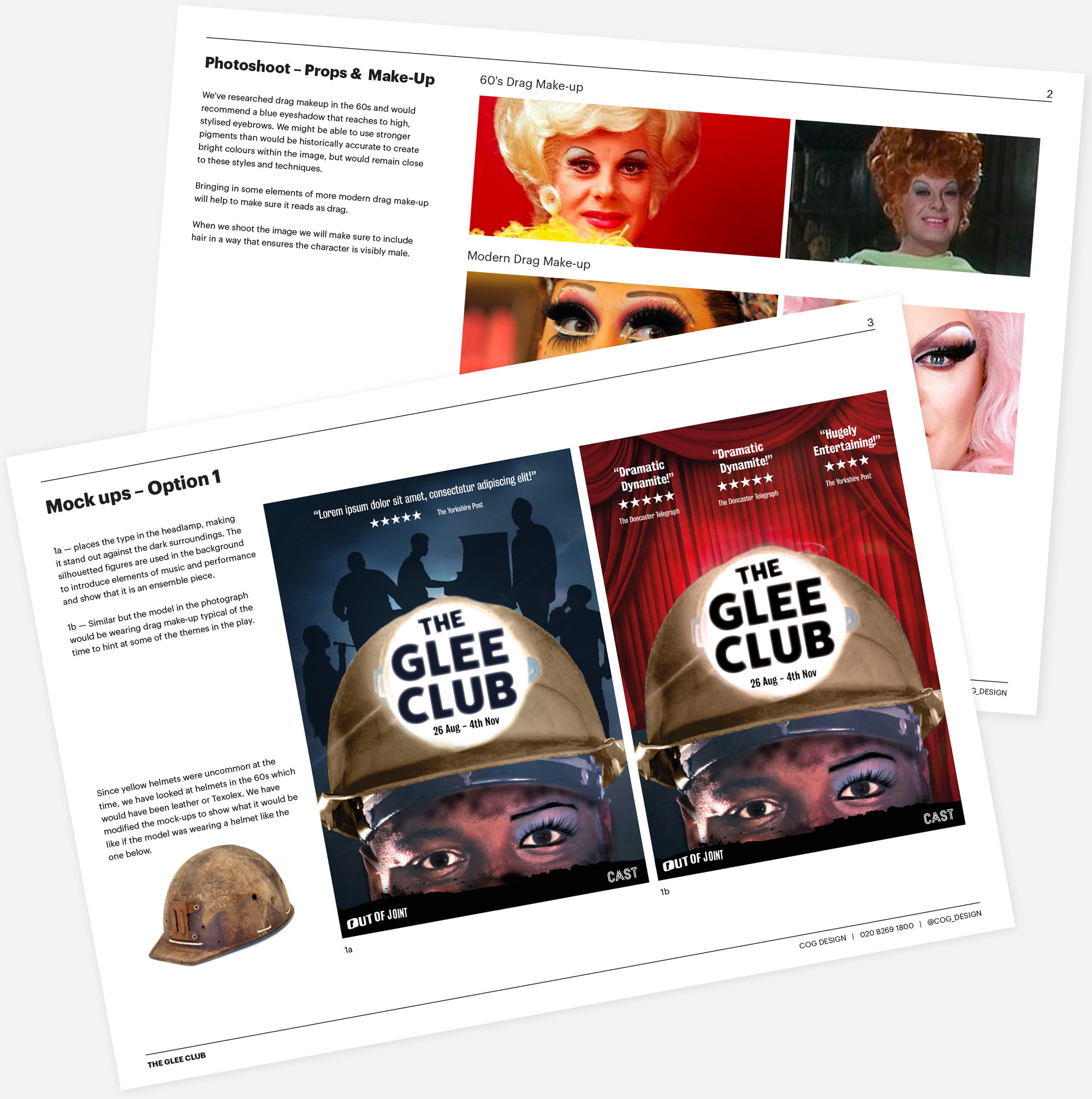 Through a series of discussions and sketched ideas, we worked with the Out Of Joint team to settle on a concept of duality: the hardened bravado of life in the pit, juxtaposed with a nighttime persona of glitz and drag. In the age of Ru Paul’s Drag Race, it felt like it would really strike a chord with audiences.

But it was really important that the imagery didn’t feel gimmicky. We wanted to authentically recreate the period. So we did a lot of research into the drag make-up of the period, and we even bought (from ebay) a miner’s helmet and lamp from the ’60s. 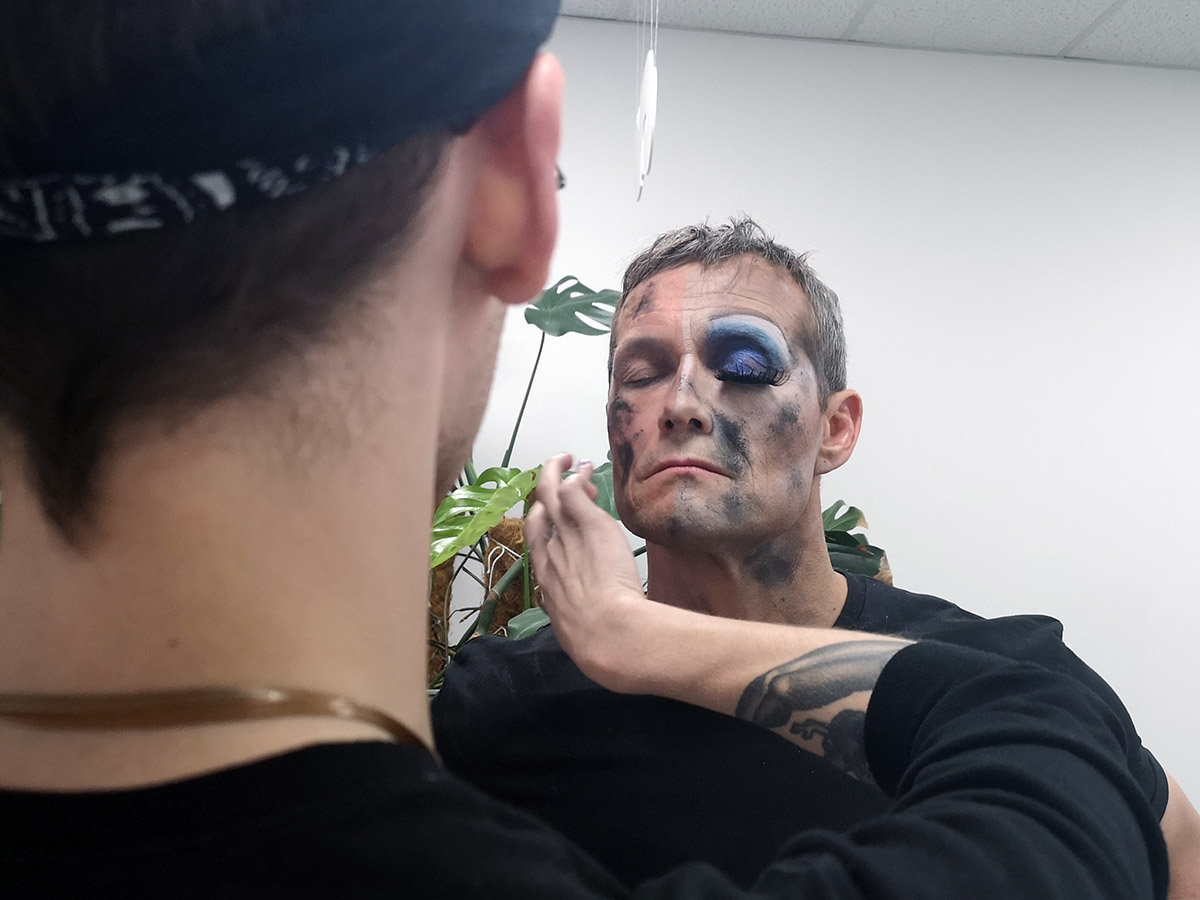 We pulled together a brilliant team of specialists to deliver the image.

We were lucky enough to be able to get the actor Bill Ward to come to spend (a generous amount of) time with us.

Working with the brilliant theatre photographer Bronwen Sharp we converted our meeting room into a photographic studio for a day.

And, in our indoor garden, we created space for the drag specialist make-up artist Jack Ellis . 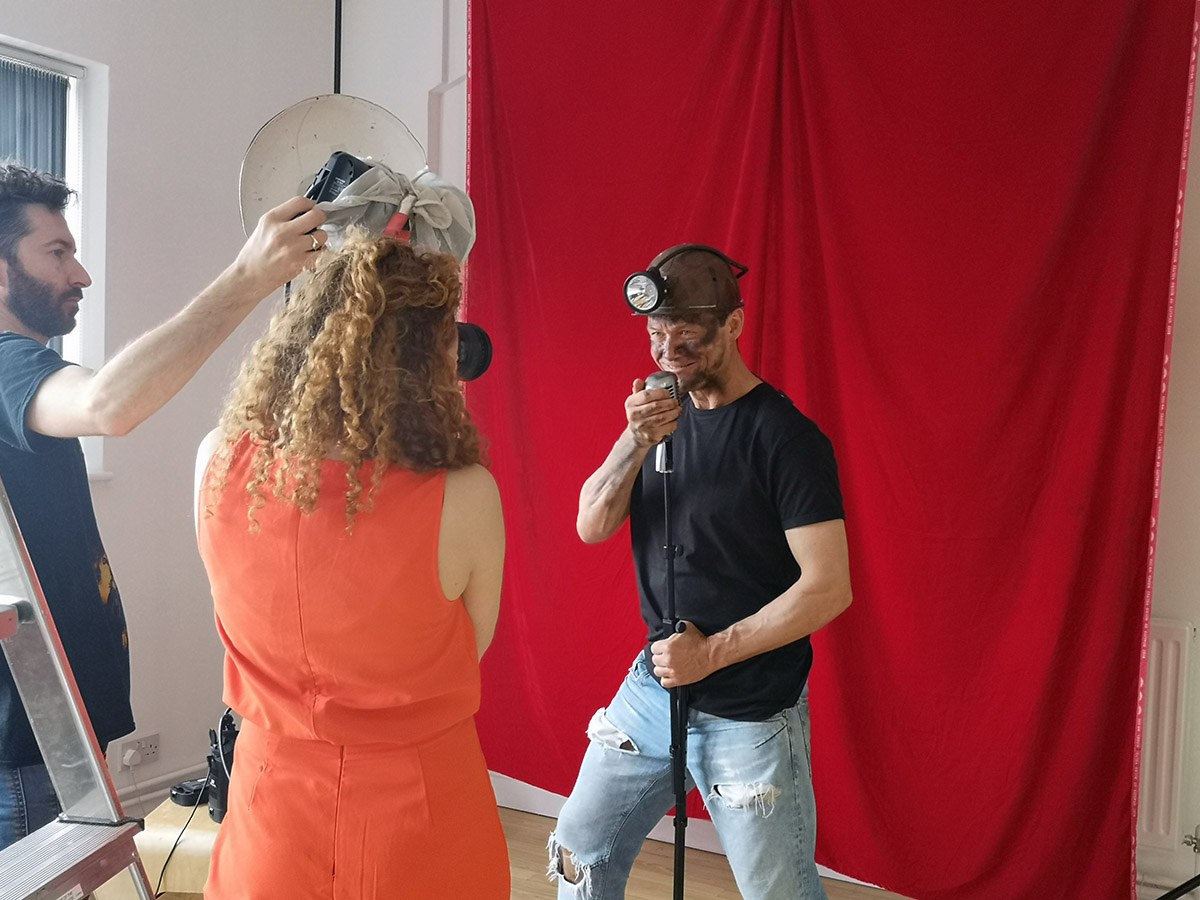 Bill Ward, posing under the lights for Bronwen Sharp.

We were all delighted with the image but also knew it wouldn’t be appropriate (or at least picked up and used) for all uses and all venues. So, while we had the set-up in place, we also produced a more conventional ‘crooner’ pose for use as a second image in venues.

And we quickly mocked-up a couple of possible poster designs to show how the image would work in context. 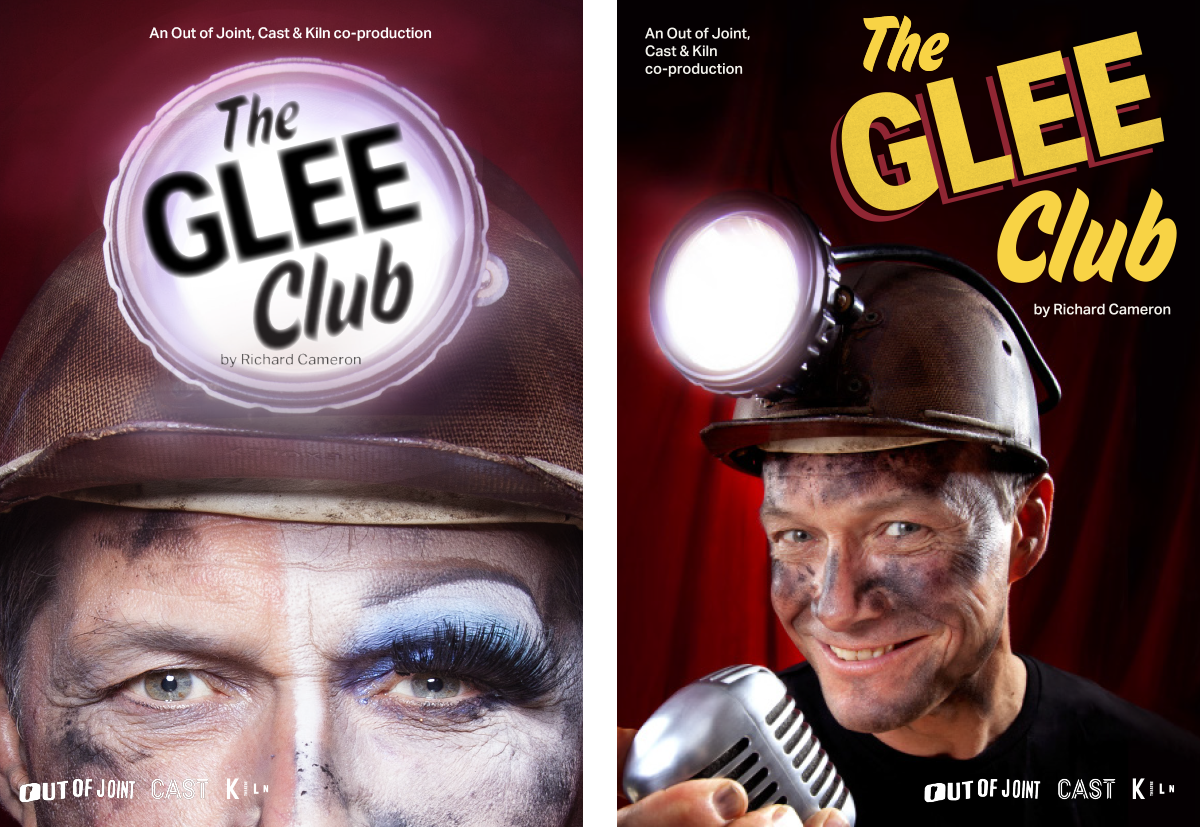 The final touch was to add a little extra design finesse to the typography.

Cracking and glowing, as if the type had been printed onto the glass, for times when the type will be imposed onto the miner’s lamp. 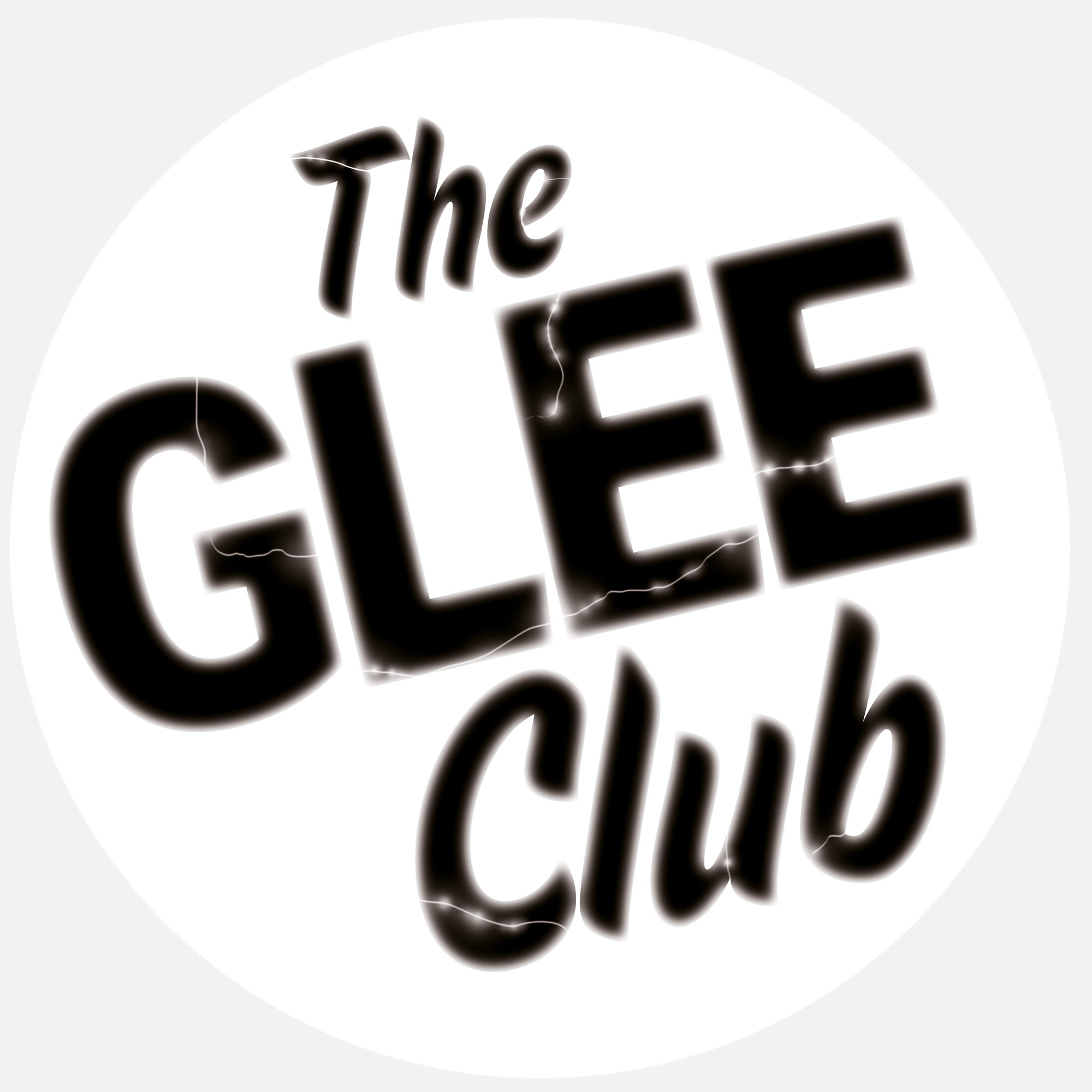 And textured and aged, as if the text were authentic 1960’s vinyl lettering, for when the type will sit away from either image. 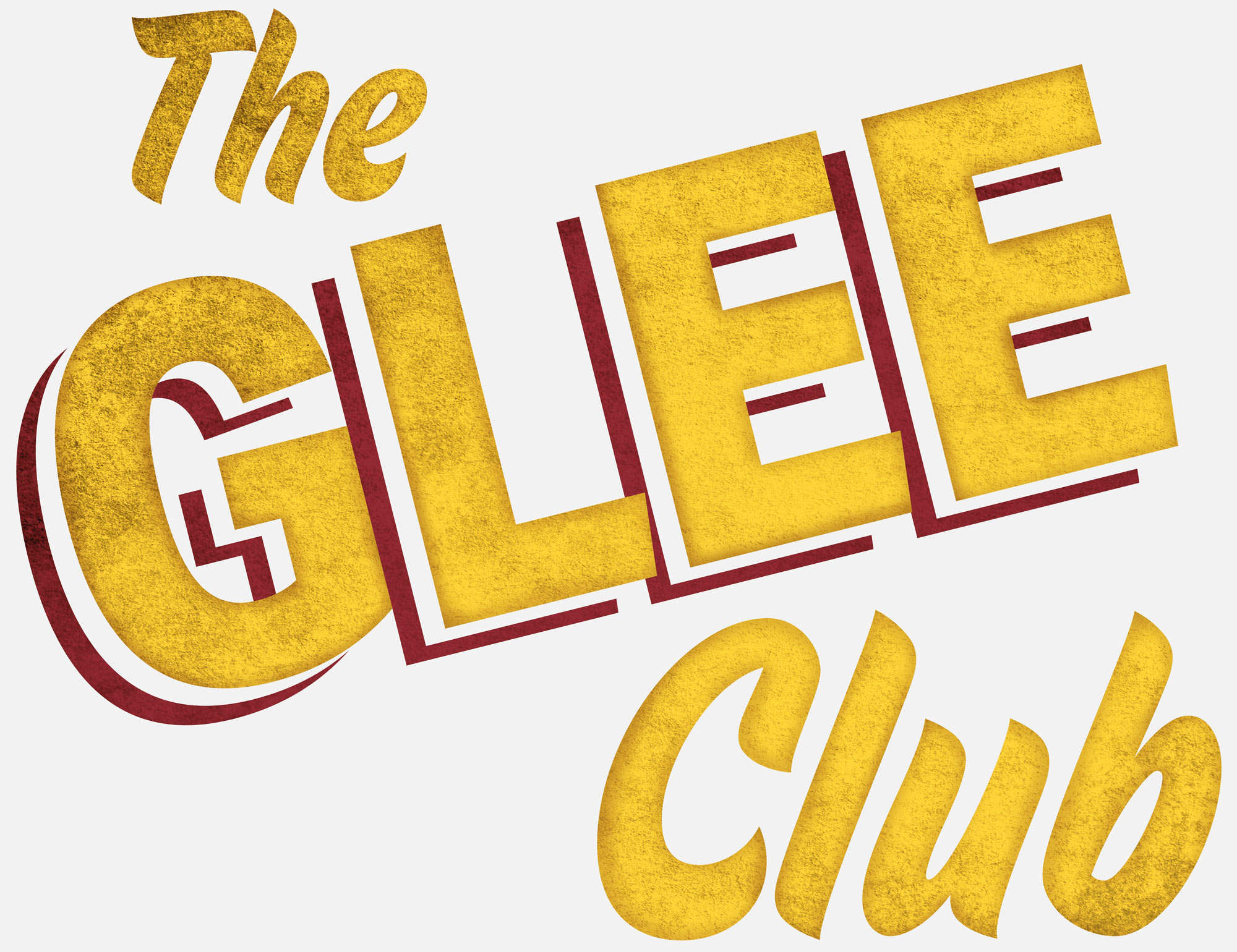 It was a great collaborative process and we were hugely proud to see the imagery being used in brochures, on websites and across publicity materials throughout Britain. 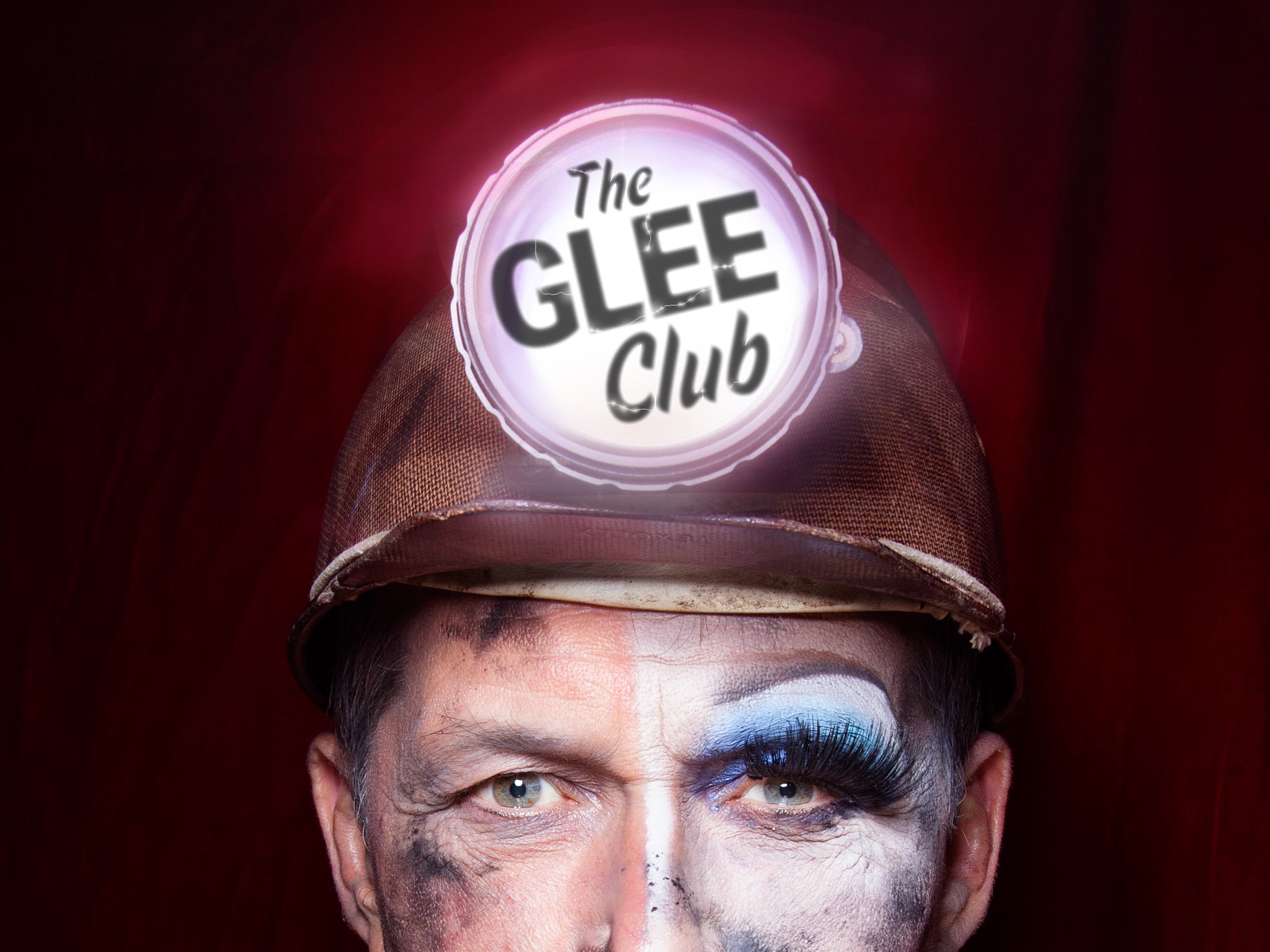 “We loved working with Cog on our campaign image for The Glee Club. They were both flexible and extremely creative when it came to the concept and they worked collaboratively to find something that would suit the different venues and partners within our tour. Once we’d agreed the direction they handled arranging the props, photographer and make-up artist to make sure the imagery came together perfectly. We were thrilled to get two great images which can be used to communicate the show to different audiences.”
Martin Derbyshire, Executive Producer

Working with the world’s biggest scientific trust on branding for a nine-month’s activity, plus an enigmatic… END_OF_DOCUMENT_TOKEN_TO_BE_REPLACED

In 1991, a newly formed Cog Design began an 18 year working relationship with one of… END_OF_DOCUMENT_TOKEN_TO_BE_REPLACED

On a Tuesday evening in July, Ross, Jenny and I hurried from the studio to Shoreditch… END_OF_DOCUMENT_TOKEN_TO_BE_REPLACED