At the turn of the century, UK television channels were proliferating, for the first time, there was real competition between channels and people began hopping between them during ad breaks. TV companies started adding station idents in between the programmes, to create and maintain loyalty amongst their viewers.

It’s commonplace now but back then, these ‘bumpers’ were considered intrusive and clumsy by viewers. The teenage channel, Trouble TV which largely showed US imports, wanted a quirky way of keeping brand-recognition without seeming corporate. 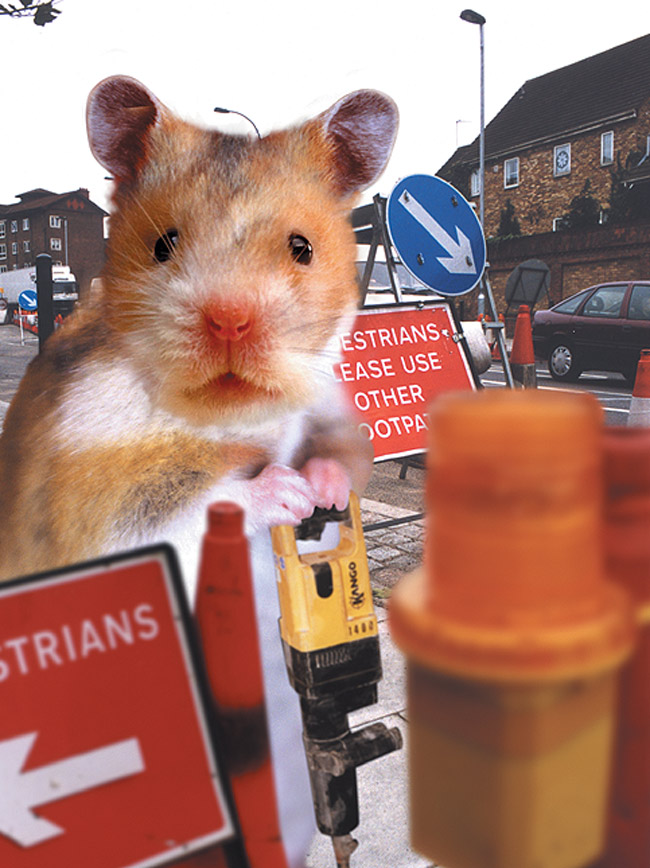 When we got a call, late one evening (we were all still in the studio), inviting us to meet with a TV channel we’d never heard of, we assumed it was a wind-up. But we went to the meeting and it seems that whoever was in charge had seen some of our work in Creative Review, had looked us up and found we had a website – it seems crazy now but back then, design agencies really didn’t bother with an online presence. Our website had short videos on our biography page (you can see them on our Vimeo channel). The video that I’d made was a stop-frame animation and had convinced this TV executive that we’d be the perfect people for the job.

Within a few days we’d drawn up some rudimentary story-boards and proposed a route with an over-sized rabbit in everyday situations (I think we’d been inspired by the Kitten Kong episode of the 1970s TV show, The Goodies). The client loved the idea but thought the rabbit was too cute and feminine for the Trouble TV demographic. So we switched to a hamster. 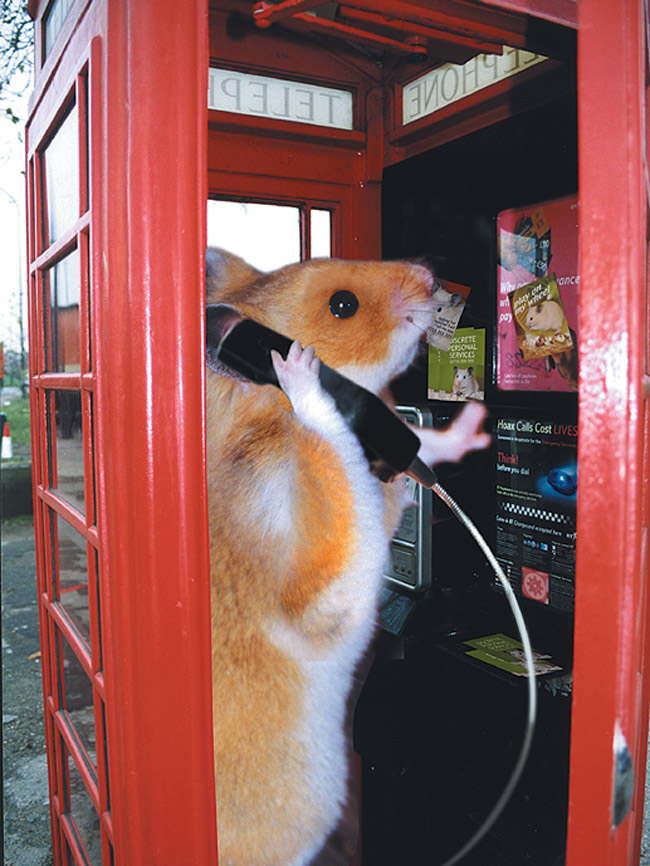 Our hamster, calling the numbers off rodent postcards.

We had to deliver six animations in two weeks and we had no idea what we were doing.

We tried to make do with stock photographs but back then, finding decent, royalty free images was almost impossible. So, instead, we bought two hamsters. What hadn’t occurred to us is that they are largely nocturnal so I had to take them home and spend my nights coaxing them and trying to pose them, whilst photographing them with a pretty rudimentary camera set-up. 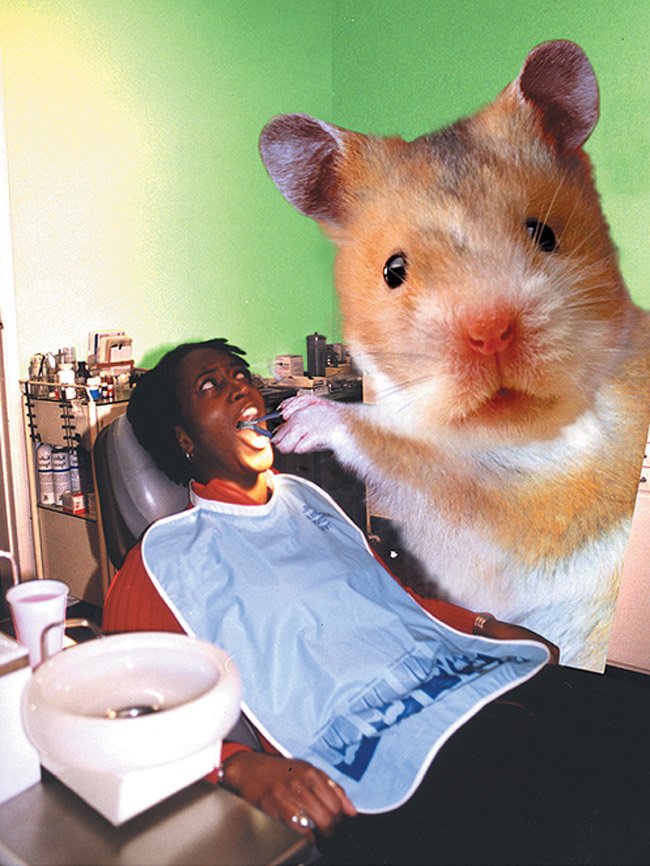 Our hamster, examining the mouth of work-experience girl, Sylvia Prince.

We then spent our days finding local locations. We persuaded a cafe owner, a barber and a dentist, in Deptford High Street, to let us use their locations. The phone box is on Blackheath and the road-works are at the bottom of Blackheath Hill. We also needed models, so we took on those roles ourselves: the vet is Sam Charrington (now running his own studio in south Wales), in the barber’s chair is designer Chris Loder, and the dental patient is Sylvia Prince (who was with us on work experience and went on to spend a decade as designer at London Transport).

We took eight rolls of film (yes, rolls of film) to the chemist to be processed and ordered large prints that we could scan from.

We worked through nights and weekends to deliver the six animations, using very slow Macs. We delivered them on time but the client was disappointed. They were too slick, too good. He wanted them to be more hand-made and crude. So we went back and edited them all again to make them feel even less like we knew what we were doing.

We delivered the full set to the Trouble TV editing suite and waited for them to air. A week later they appeared on screen to launch their autumn season. But instead of the audio swooshes and chimes that we’d been told would be used, they’d employed a voice-over artist. A young Matt Lucas who was in a new and niche comedy called Little Britain, had been asked to give our hamster a voice.

We found new homes for our two hamsters. Sadly, neither of their homes had digital TV channels so they never got to be annoyed by those irritating bumpers that appeared at either side of every ad break for weeks.

In 1995 we began a series of projects for Amnesty International. Our work included their campaign… END_OF_DOCUMENT_TOKEN_TO_BE_REPLACED

The 4th May 2006 was a special day for us at Cog. We were about to… END_OF_DOCUMENT_TOKEN_TO_BE_REPLACED

Creating publicity for the first ticketed exhibition at Museum of London Docklands, our brief was to… END_OF_DOCUMENT_TOKEN_TO_BE_REPLACED

In 1994 we began a fifteen-year relationship with the London Jazz Festival, helping them grow from… END_OF_DOCUMENT_TOKEN_TO_BE_REPLACED