The With And For Girls collective is a group of eight organisations – EMpower, Mama Cash, Nike Foundation, NoVo Foundation, Plan UK, Stars Foundation, The Global Fund for Children and The Malala Fund – with a track record of supporting civil society organisations working to improve the lives of girls and their communities. 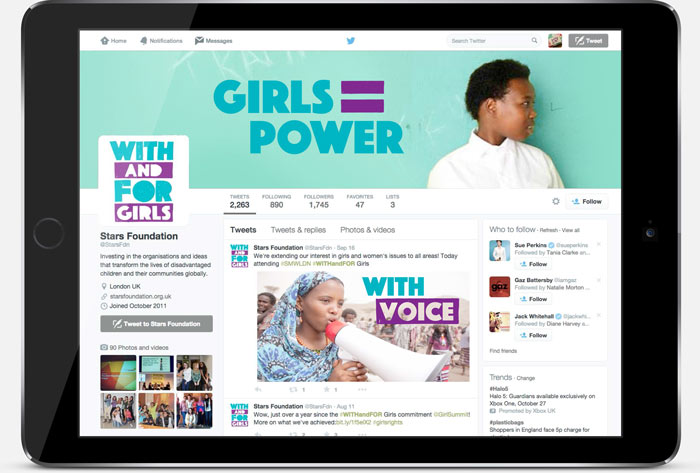 On 16th November 2015, With And For Girls announced the winners of awards which provided $1m to strong, grassroots, girl-led and girl-focused organisations across five global regions: Asia and the Pacific; Europe and Central Asia; The American Continent and the Caribbean; The Middle East and North Africa; and Sub-Saharan Africa. 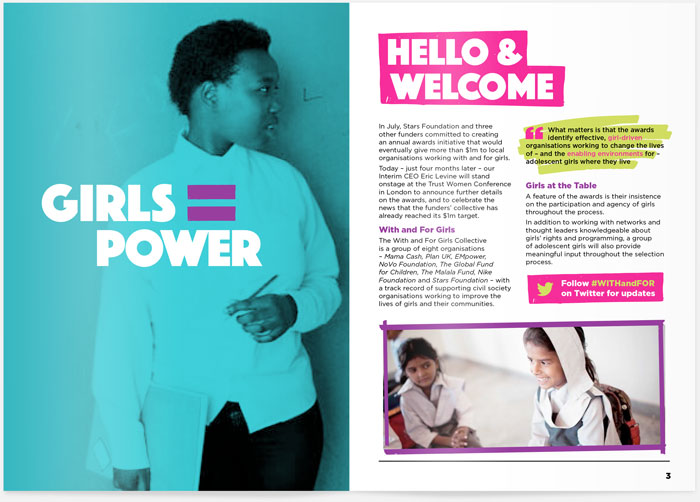 What sets this brand apart from others in the development sector is the method that was used to design it.  We have stayed true to our values and listened to the very people we have set out to serve.

Over a fascinating few months, we worked with them, especially with the lead organisation (Stars Foundation), and with the direct input of girls across the globe, to create an empowering brand for the organisation and a marque that the winners can proudly display and own.

A feature of the awards is an insistence on the participation and agency of girls throughout the process, including the judging of the awards themselves. We were lucky enough to be able to tap into that network of adolescent girls at every stage. It was a very different way of working and fascinating to be able to include their voices in the process. 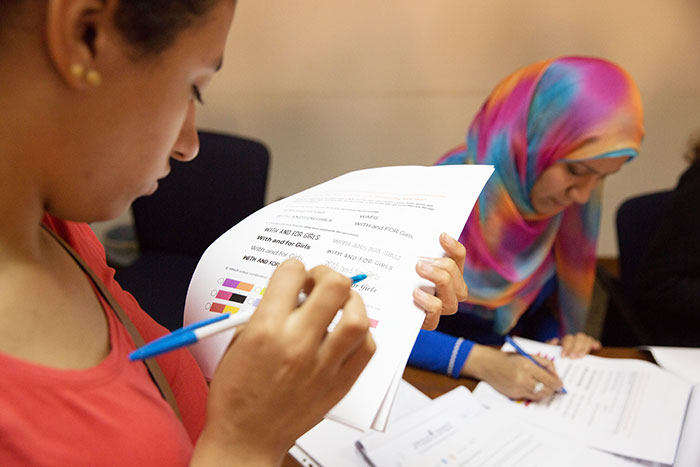 Our first step was to create a simple questionnaire to explore the cultural relevance of popular themes, keywords, ideas, colours and shapes. Panels of girls from Mexico, Egypt, Tanzania, the UK and India contributed their thoughts (either directly or through translators). 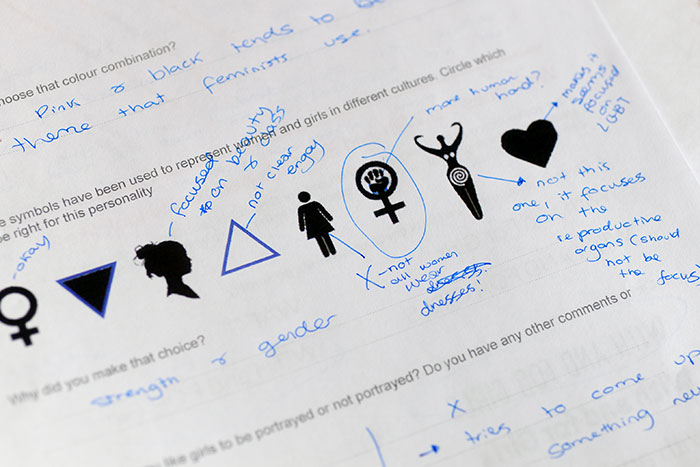 Unambiguous feedback from one of the panels of girls

Through their (often forthright) responses, it was clear that we needed to express the power and activism of the brand whilst avoiding cliches or culturally specific symbols – interestingly, the girls did want an identifiable marque that they could use as a campaigning tool.

We created four visual approaches based on this feedback and presented those ideas to the eight funding partners. And from that feedback we narrowed the options down to two, for the twenty award-winning, girl-led organisations to review and vote on.

A clear ‘winner’ emerged, utilising the equals symbol (=) as the core idea. Using this mathematical language we were able to produce a mix of communications which is powerful and immediate (across all cultural and language barriers) whilst avoiding cliches and stereotypes. 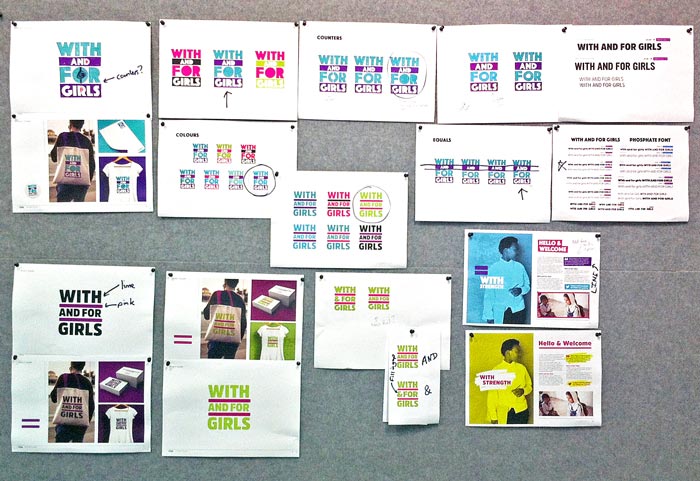 A snapshot of our pinboard, with a small selection of the detailed refinements we worked through.

Taking that idea, we honed the language and refined the visual elements until we were able to provide a robust brand that we rolled out across a number of applications. 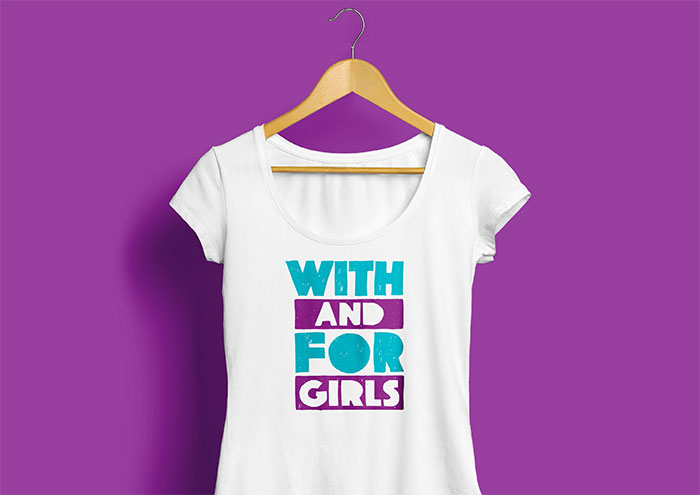 We usually work collaboratively, but this process took that to a new level. It’s been hugely liberating to leave decisions in the hands of those who will be directly affected by the success of the brand. 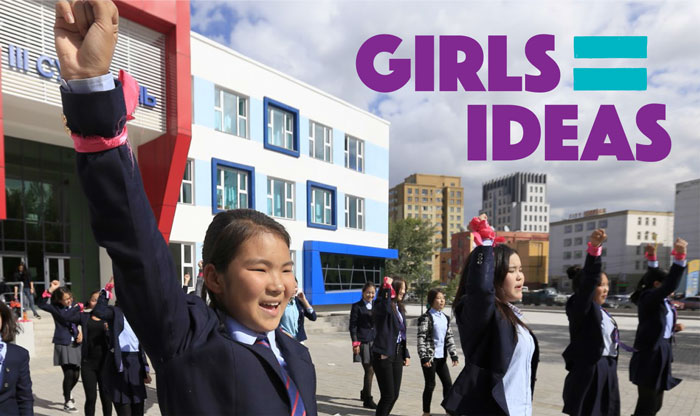 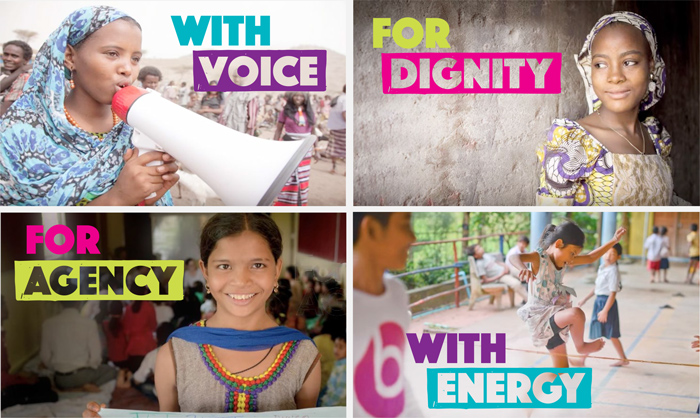 Congratulations to all the winners, and thank you for the opportunity of working with you through this fascinating journey. 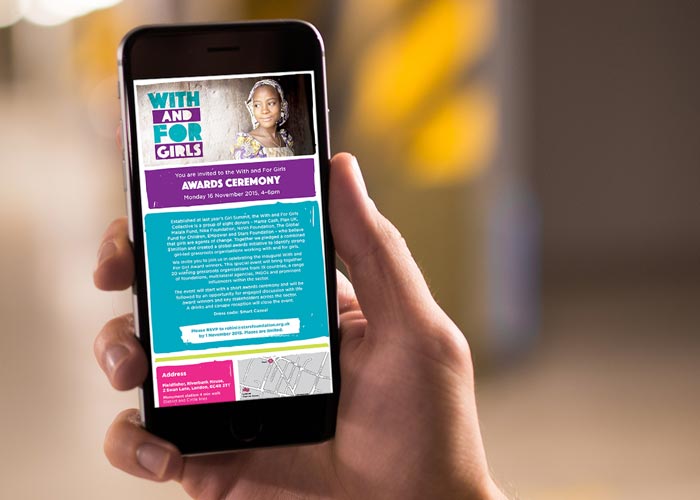 Ashley from Stars Foundation is here for a post-launch debrief about their lovely new website starsfoundation.org.uk END_OF_DOCUMENT_TOKEN_TO_BE_REPLACED

Continuing this week’s multi-device theme, Ross is putting the finishing touches to a new website for… END_OF_DOCUMENT_TOKEN_TO_BE_REPLACED