That’s definitely what we got when we entered the intimate upstairs space at Soho Theatre. From the moment the characters came to life, we were trying to keep up with the tirade of carefully constructed one-liners between fits of laughter. To set the scene, imagine the set of Red Dwarf was commandeered by the cast of Mighty Boosh with a surreal storyline similar to Alice in Wonderland and you’ll have something that vaguely resembles this brilliant comedy. The play is narrated by a guitar-playing alien (Cameron Macaulay) with the help of his three intellectually challenged children (Jack Gleeson, Eoghan Quinn and Aaron Heffernan). The trio master countless roles and puppets to tell the tale of a Russian Polar Bear and a Scottish Koala waking from 700 years in cryogenic deep freeze. The two intergalactic bears are on a spaceship floating around the universe. Apart from each other, their only company is a humourless computer who has woken from their deep freeze them to inform them of impending doom. They’ve accidentally found themselves in the orbit of a planet called ‘Meterotopia’ ruled by the evil communist ‘Nico’ who drains them of fuel and plans to steal their ship. Adding to their list of woes, their captain is harbouring a deadly virus which will spread if they un-freeze her so they need to solve their issues alone.

“The real highlight of the show was Aaron Heffernan’s collection of scene-stealing characters which highlights his exceptional acting talent.”

The tale journeys through jungle prisons, relationship woes and different space zones. We even meet a Boosh-esque tree creature whose imaginary lover is his own voice on a tape recorder. But, this isn’t a comedy solely based on eccentricity – the comedy is layer upon layer of carefully crafted humour based on excellent character building and impeccable timing. My only criticism, is the use of the narrator. The story doesn’t need to rely on this framing device to justify the use of puppets, I’d easily forgotten that there were actors present after just a few lines. This is all down to the brilliant performances, some impressive accents and very well developed characters I didn’t even know were possible with such simply designed sets and puppets. Bears in Space shows how wild imagination and talented puppeteers can combine to tell a story which is both completely bonkers, absolutely brilliant, and at times, moving. Oh and I forgot to mention, Jack Gleeson is otherwise know as ‘Joffrey Baratheon’ from Game of Thrones. So you’d better leave sharpish before those pesky GOT fans line-up to get their selfies taken. 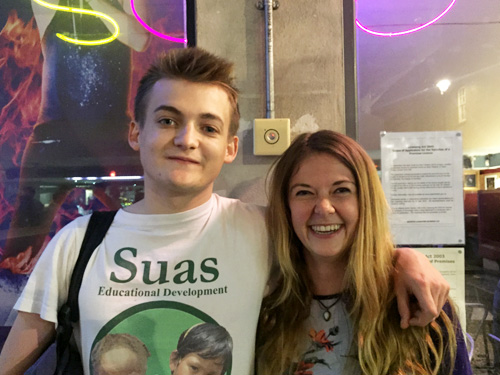 In a small shrine, in the enoumous chasm of The British Museum’s Great Court, Grayson Perry… END_OF_DOCUMENT_TOKEN_TO_BE_REPLACED

As part of the London International Mime Festival, Hilum was the first performance by Les Antliaclastes,… END_OF_DOCUMENT_TOKEN_TO_BE_REPLACED

They say love is blind. But is it also covered in boils, shedding hair, and missing… END_OF_DOCUMENT_TOKEN_TO_BE_REPLACED