Theatrical magic-makers Royal De Luxe brought their Giants to Liverpool for the third and final time. Michael revisited the city a decade after his trip to the European City of Culture.

Last weekend I travelled with my family to Liverpool. On Sunday morning we rose early and walked through the city centre towards the docks.

Like a quirky filmic musical, people appeared from every doorway to join us. A handful at first, then dozens, then hundreds. Down every side street we glimpsed the streams all flowing in the same direction. Couples, family groups, buggies, wheelchairs and zimmer-frames; all ages, all shapes; chatting, excited, in a hurry. 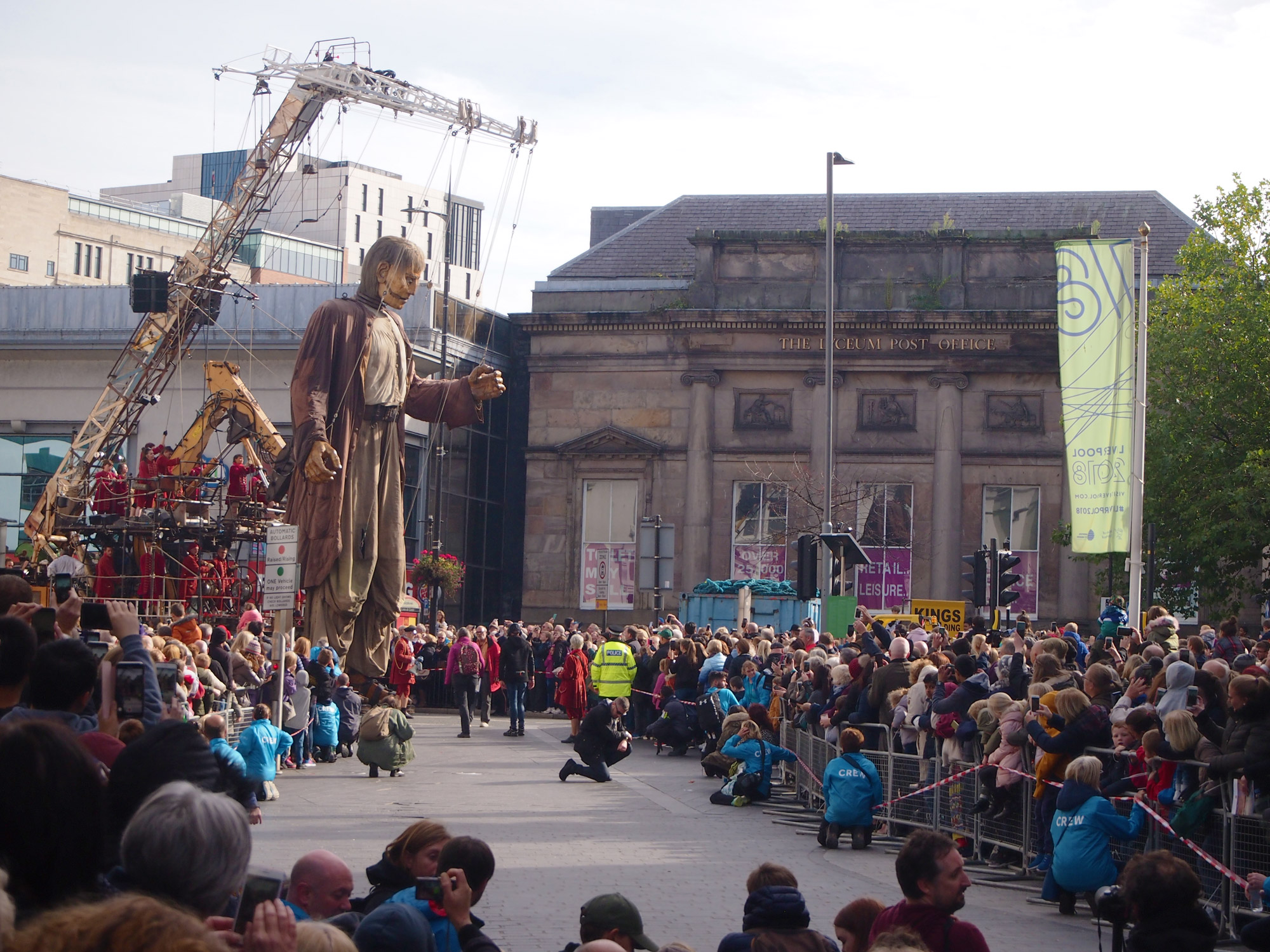 The Giant begins his Saturday with a walk down Church Street.

The streets must have flowed like this when these docks made this one of the busiest trading ports in the world. Expect we weren’t all able-bodied men, there to haul cargo, we were all-sorts there to marvel at the arts; we were there to watch puppetry. How many of us imagined that would be something we’d do on a cold Sunday morning?

Hundreds of thousands of people lined the streets all through the weekend to catch occasional sight of the French theatrical company that has helped to transform this city. 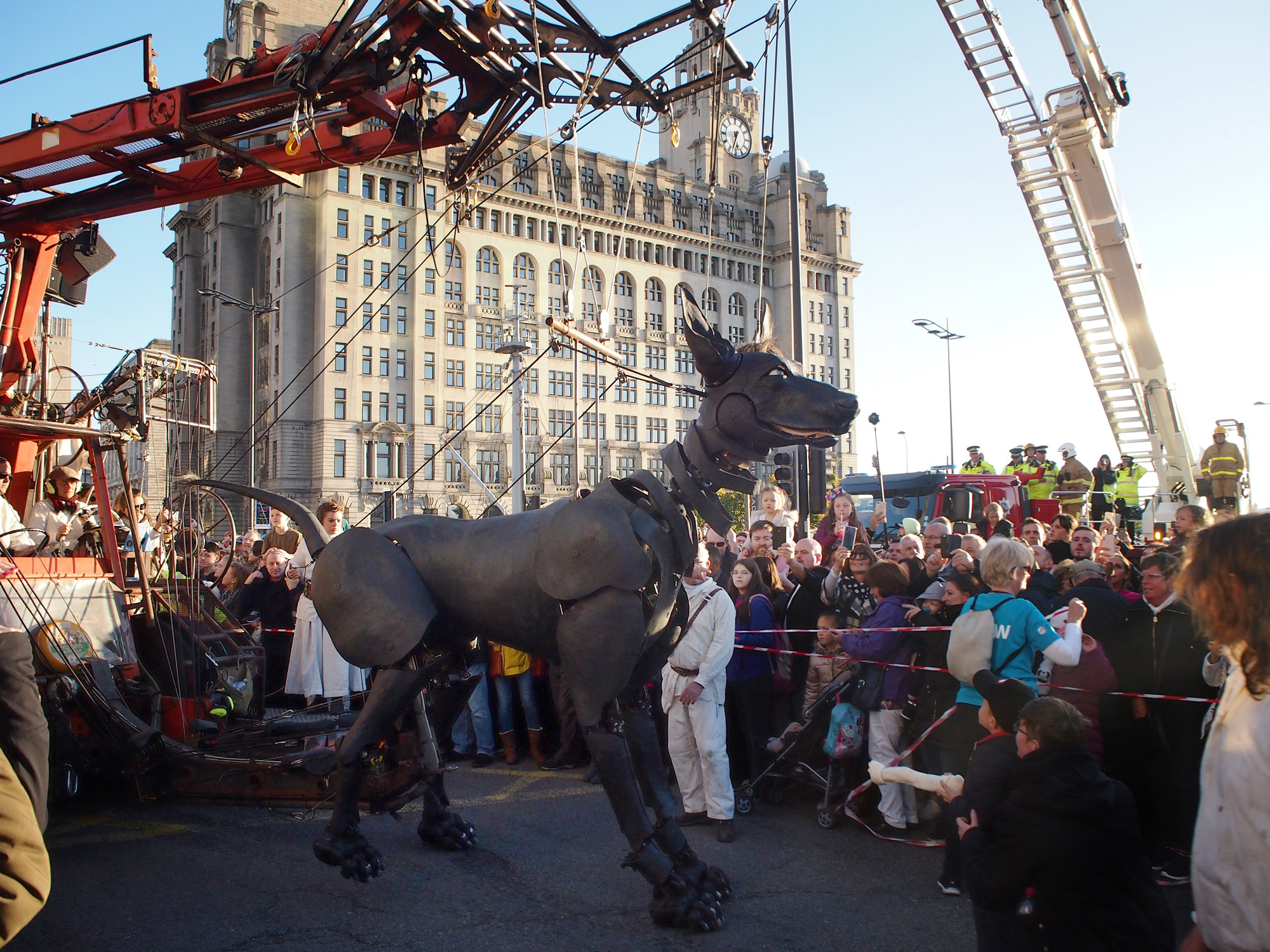 Xolo in front of the Liver building.

We watched the Little Boy sleep, wake, walk and stare in wide-eyed wonder at the world. We saw the dog, Xolo, playing with the crowds, drinking from a bowl and running around roundabouts. And we experienced The Giant, towering 50ft above us, striding in from another world. 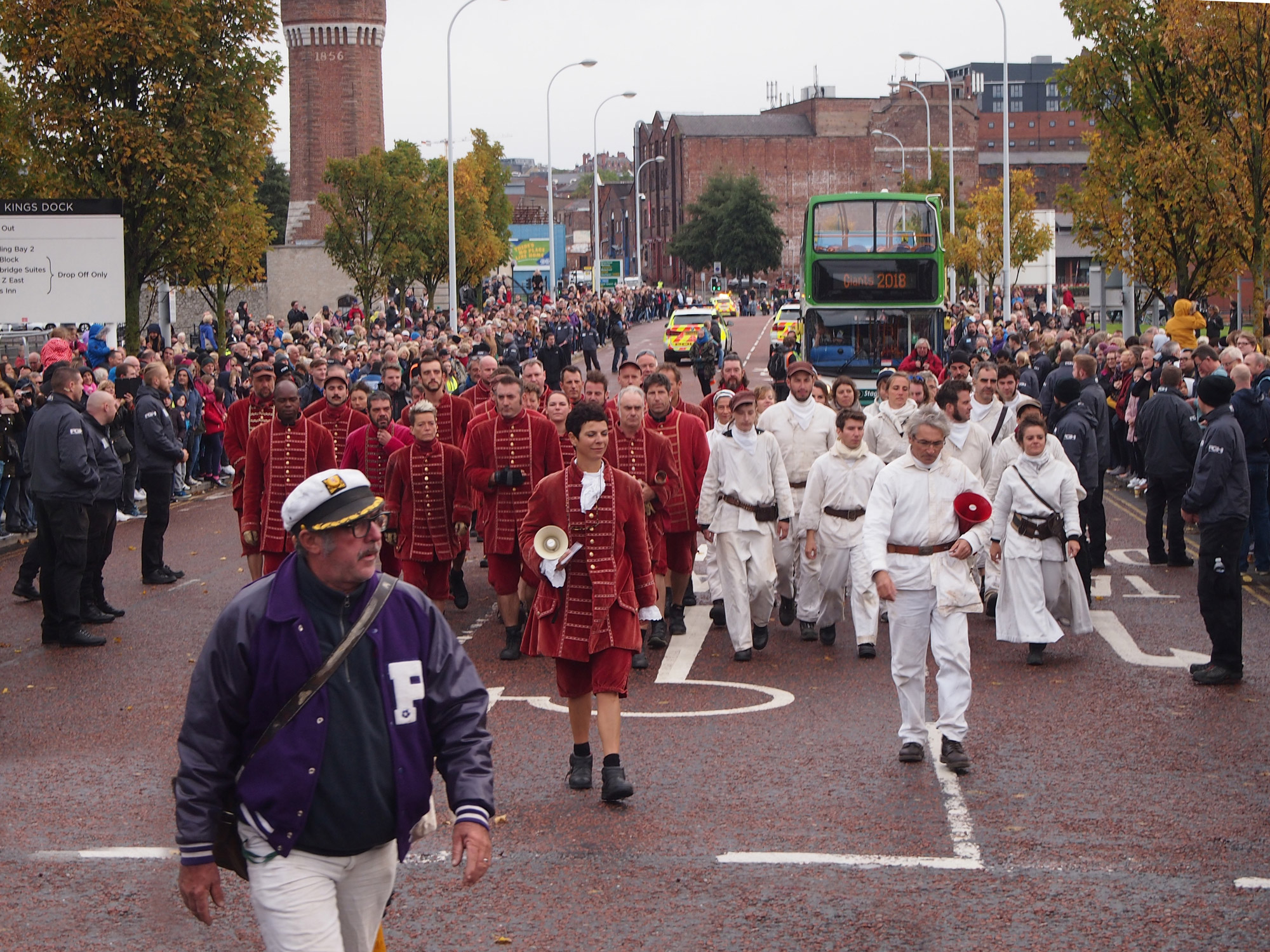 The Lilliputians arrive for work on Saturday morning.

Controlling them all were the Lilliputians: the impeccably dressed and unerringly disciplined troupe of French men and women whose physical strength propelled these enormous marionettes with such grace and humanity. 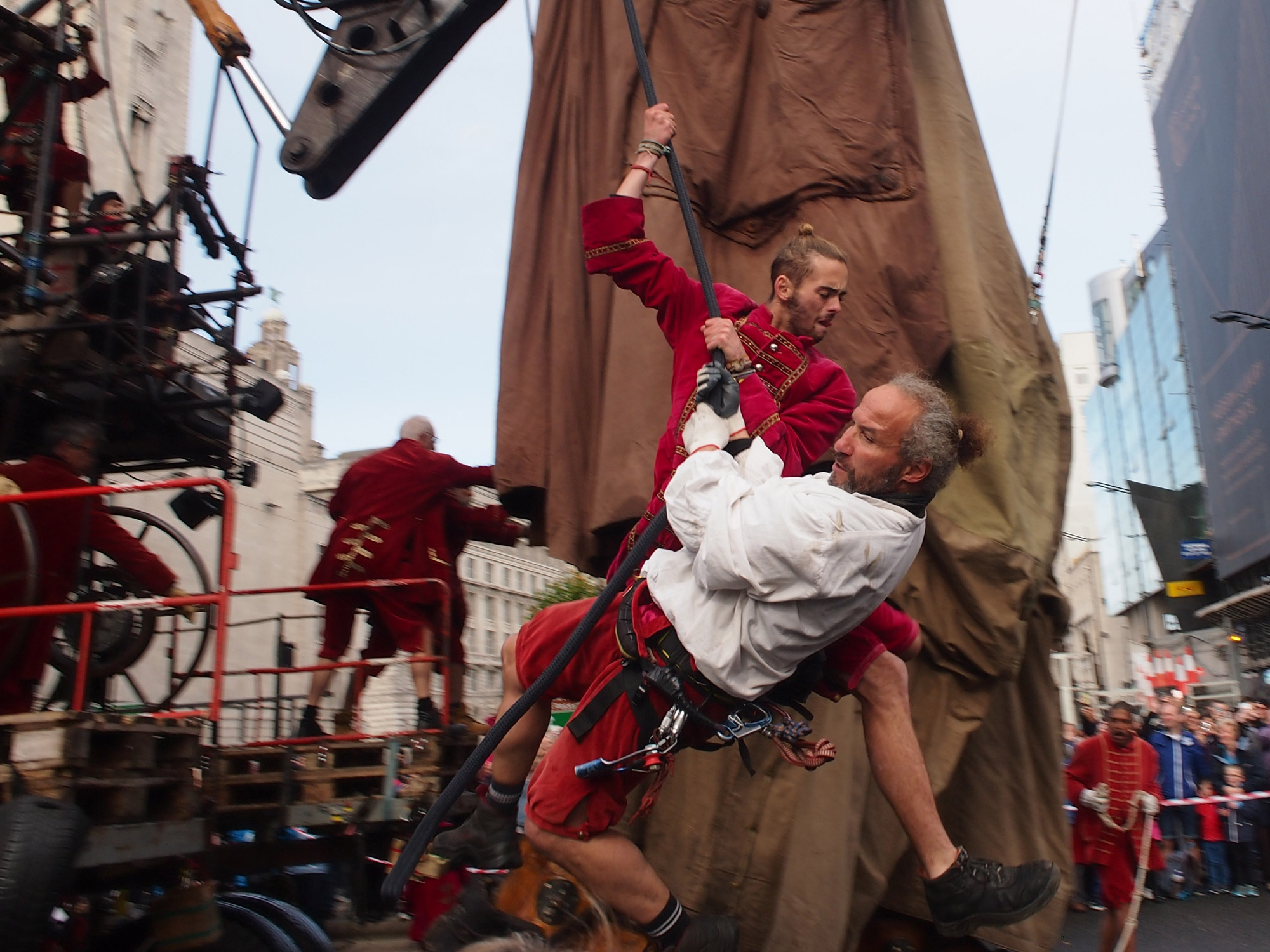 The Lilliputians, swinging from ropes to move the Giant’s legs.

There was a narrative woven around them but I’m not sure many of us really followed it. The characters were enough for us.

Liverpool’s Dream, as it was officially billed, was the third visit to the city by Royal De Luxe. Artistic director Jean-Luc Courcoult has described it as his finale, a goodbye to the city that has given him such a warm welcome. Maybe that is true, maybe it’s another part of the mythology that has grown around him. 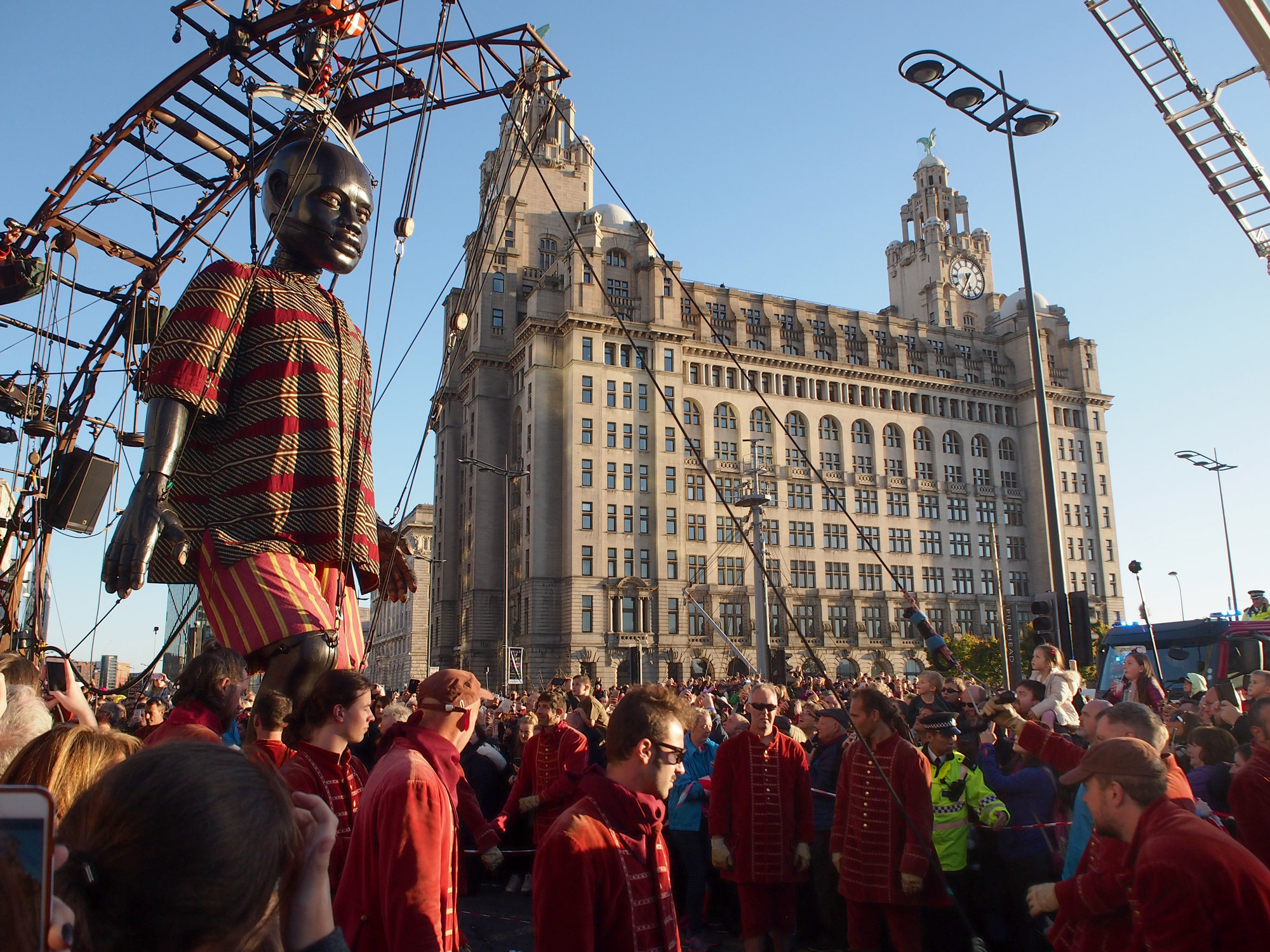 The Little Boy in front of the Liver building.

Liverpool was European City of Culture in 2008 (Brexit means it is last British city to be given that opportunity). That initiative was a huge success and the massive inward investment through EU grants, culture and tourism is cited as a key reason why the city has weathered the storm of the resulting years of economic recession. 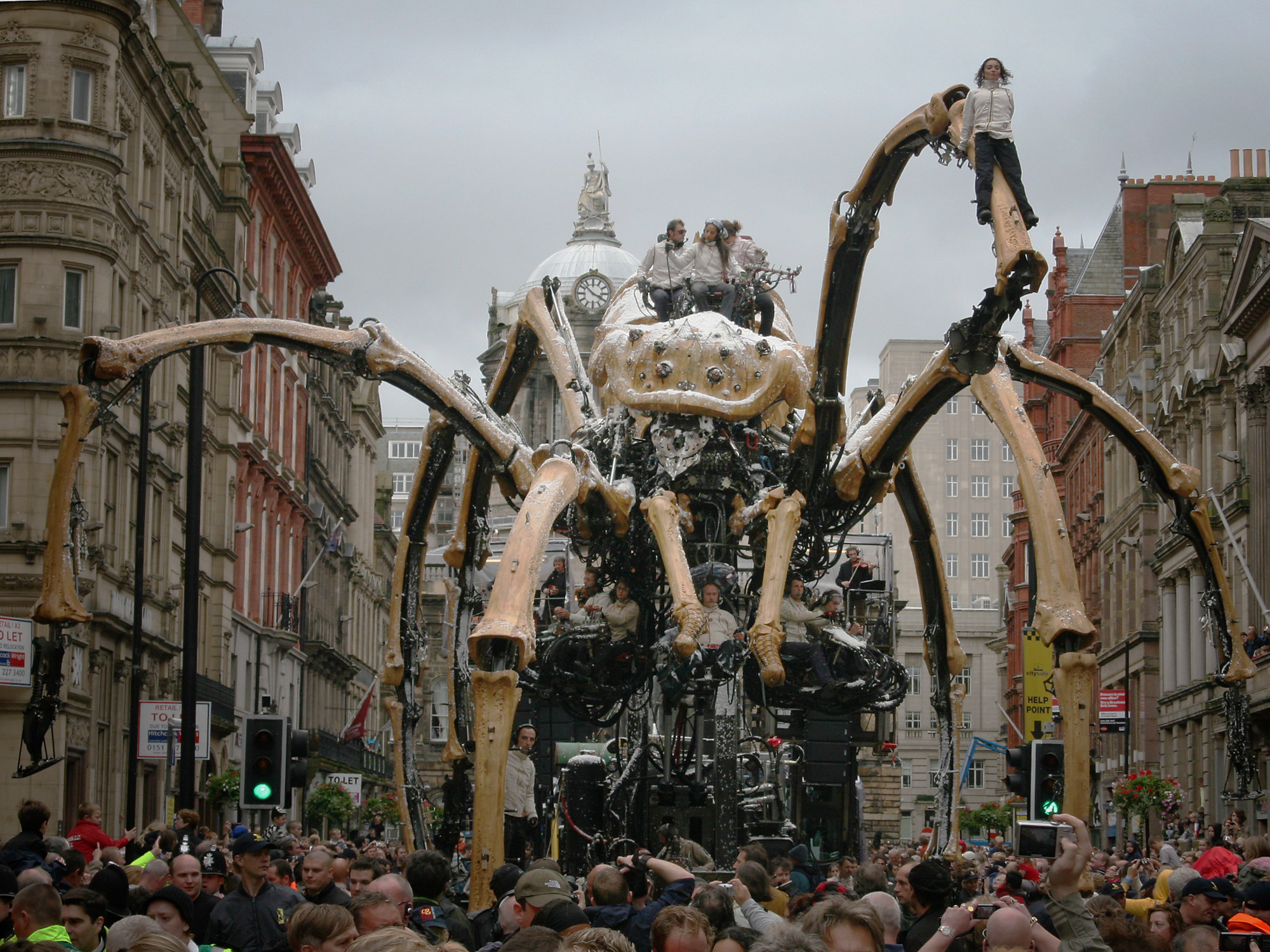 In that year, Liverpool saw its first ‘Giant’. La Princess was a gargantuan spider built by La Machine, a company led by François Delarozière who had recently set up on his own after years as a key player with Royal De Luxe. 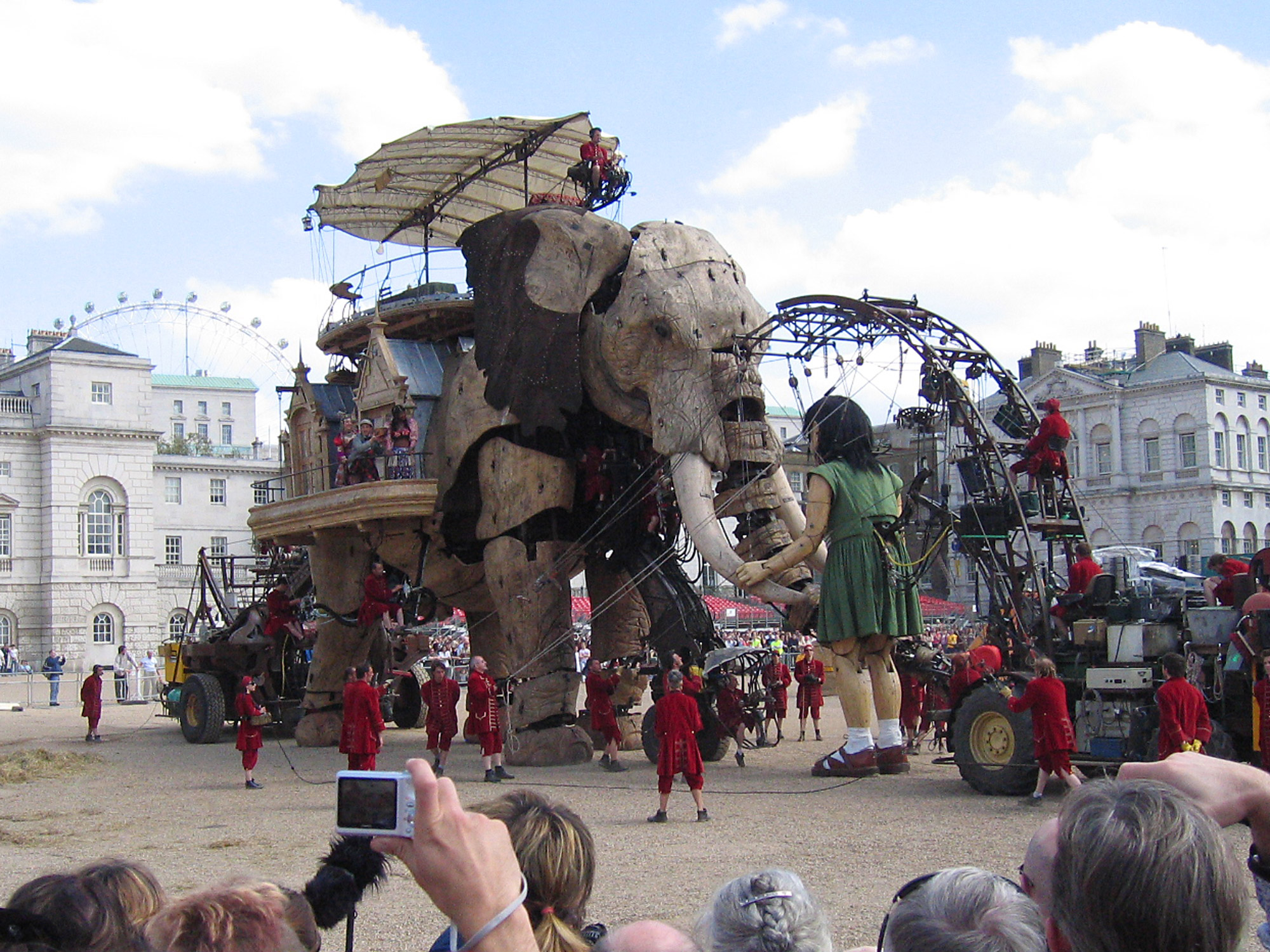 The Sultan’s Elephant meet the Little Girl on Horseguards Parade in London.

Delarozière was the engineer behind the astonishing Sultan’s Elephant that came to London in 2006. That show broke every record for public investment, public participation and benefit. I’m not alone in arguing that without that show, London would not have staged the 2012 Olympics.

A decade after Liverpool ’08, very few of the crowd care about the politics or history of it all. Why would they? They’re here to witness the spectacular, to connect with the extraordinary, to build memories. These are the moments that will shape their own story; these are the tales they will tell, they will become their family’s myths and tall tales. And, of course, these are images that will fill their social feeds. 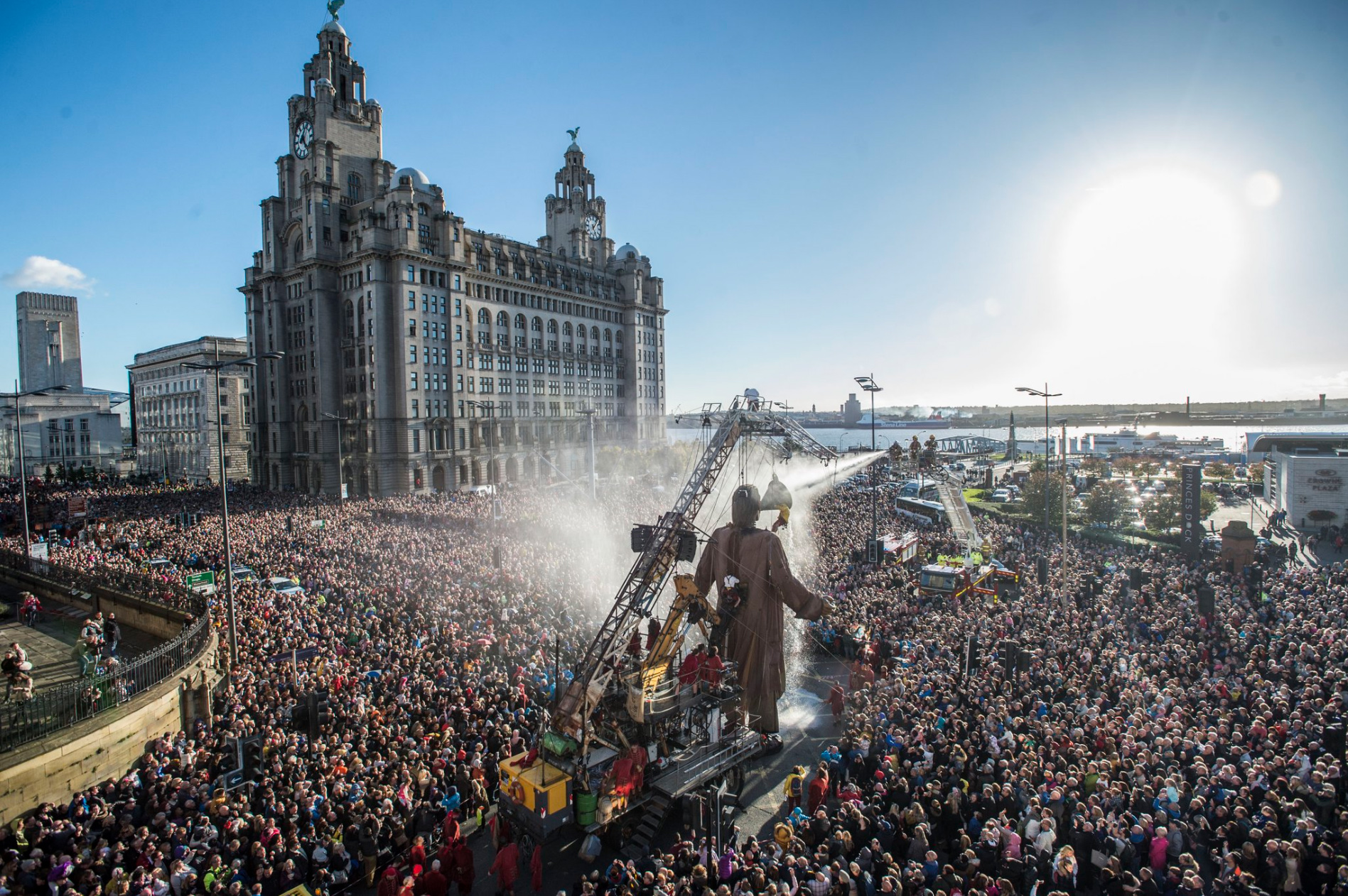 The Giant in front of the Liver building. © James Maloney/Liverpool Echo.

Sunday was the last day of the long weekend of Liverpool’s Dream. The day before, I’d stood in the middle of a six lane highway, filled and overflowing with happy people as The Giant strode amongst us and stopped for a drink, delivered from a fire-hose.

Thanks to James Maloney/Liverpool Echo for allowing us to feature the incredible picture above. Can you see me? I’m just by The Giant’s right hand. 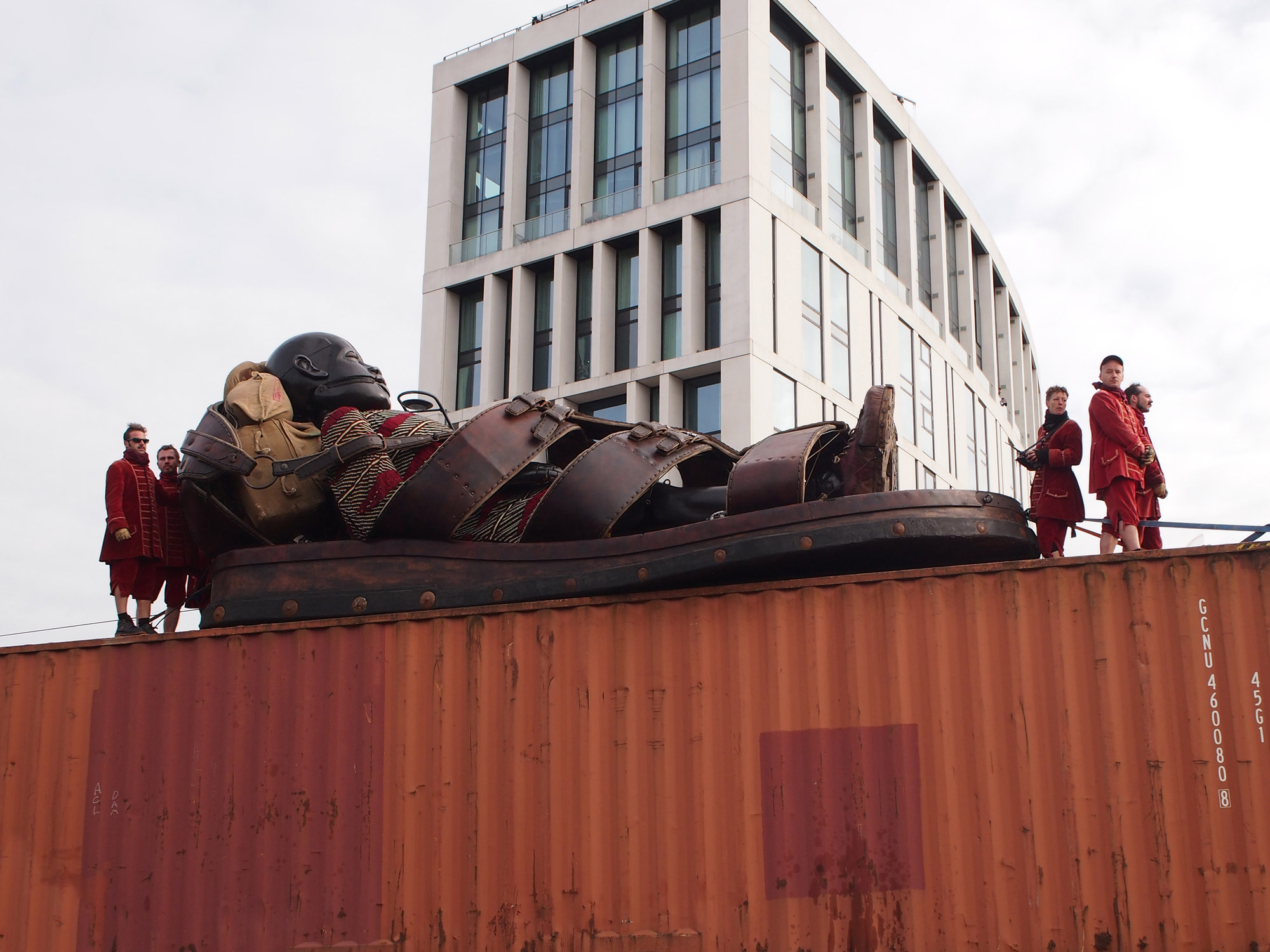 The Little Boy in his sandal-raft, being transported to the docks.

Today we all watched with sadness as he waved goodbye to the Little boy who floated away on a huge sandal, and we chased through the streets to keep up with Xolo and The Giant; one of the most thrilling ways to experience the event. 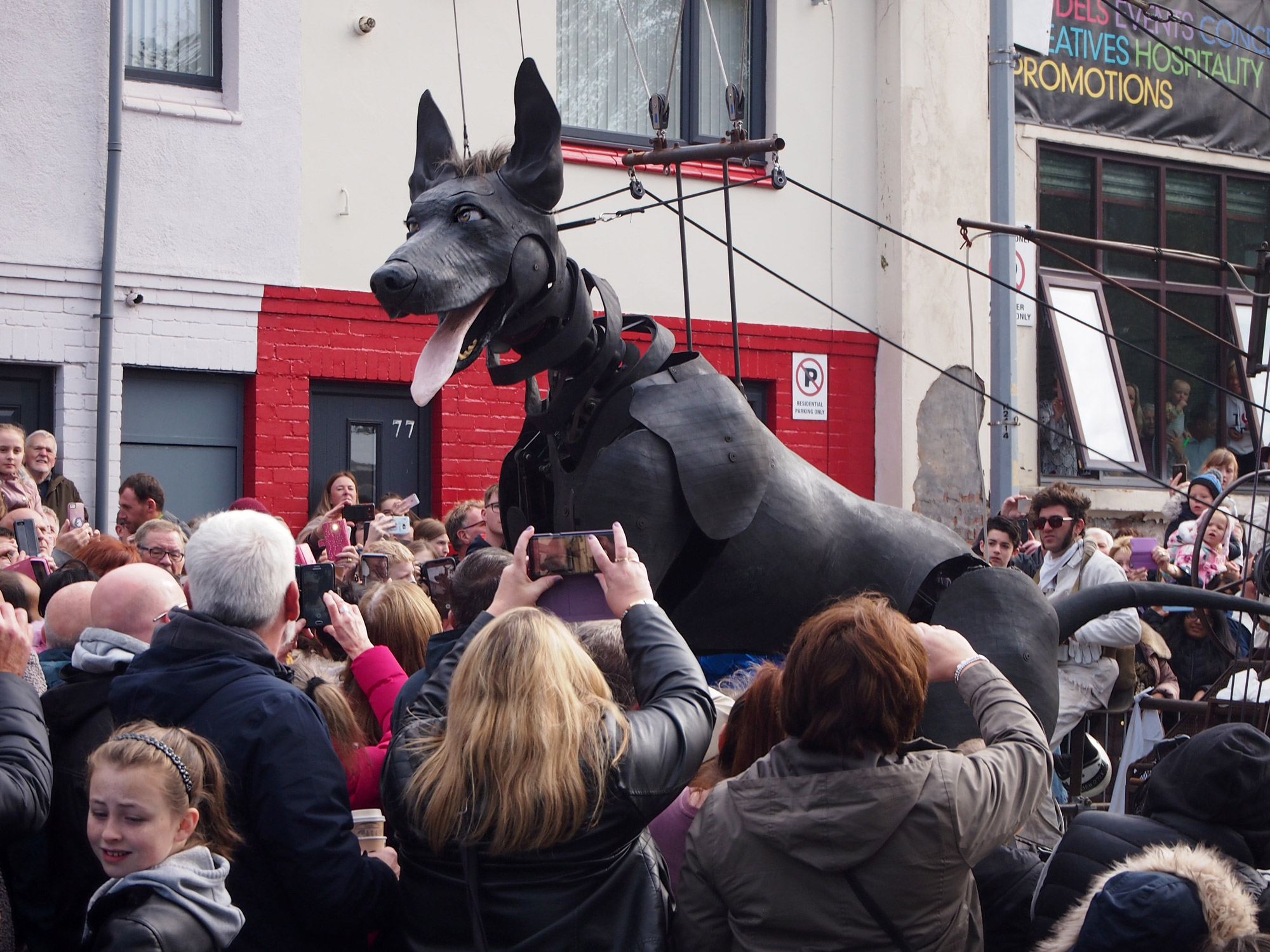 Xolo playing with the crowd.

As the pair settled in to their siesta (the very French company always take a two and a half hour lunch-break), I made my way back to the Salthouse Dock which we understood would be the scene of the finale. 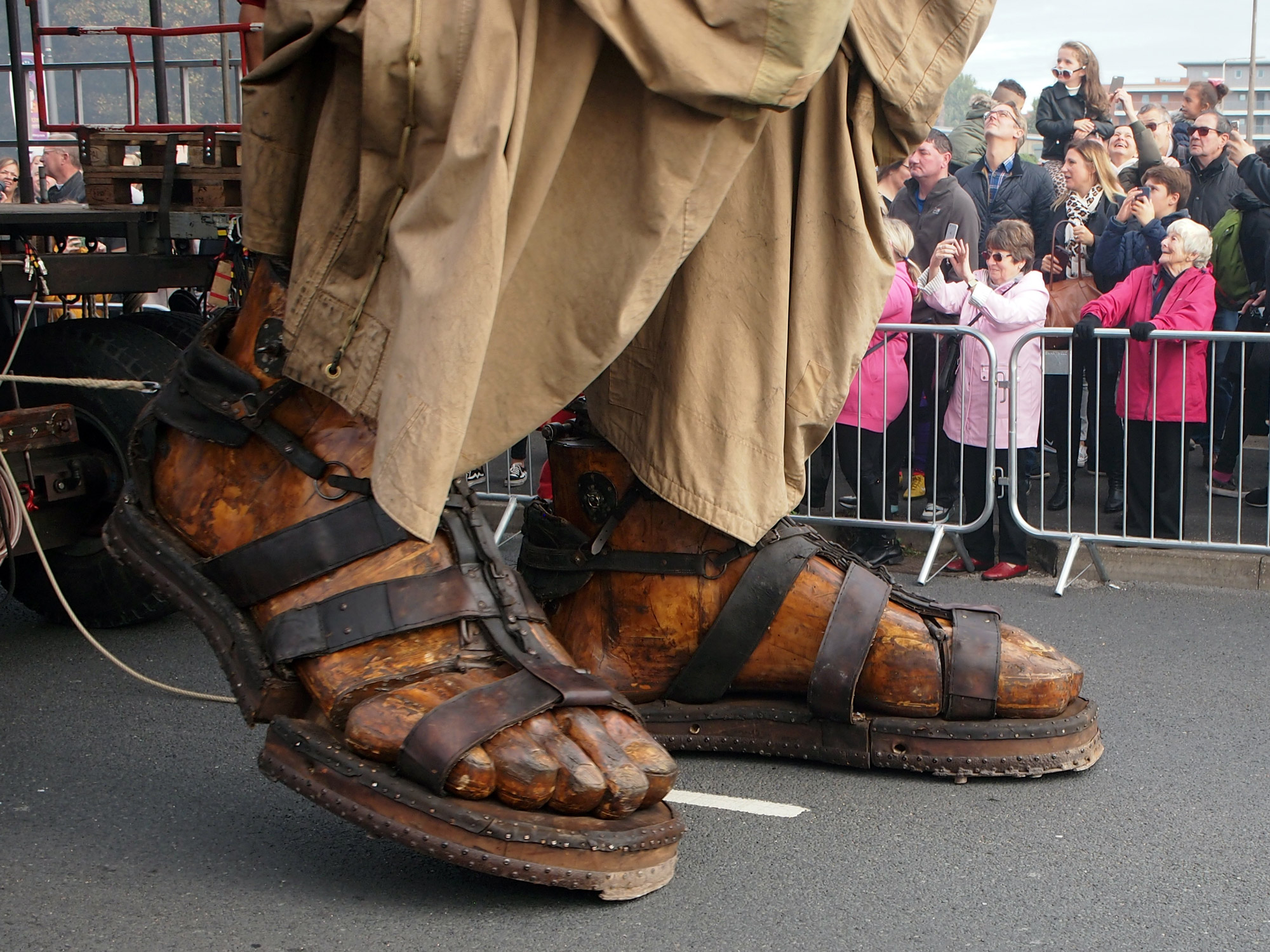 The Giant towers over the awe-struck audience.

Waiting there I spoke with a group of women who’d travelled for the day, from near Blackburn. This was their third Royal De Luxe show in Liverpool.

Through conversation I heard more about how these ‘free’ performances have changed their perception of this city. They’ve returned countless times with each of their families to see expensive shows in arenas and theatres, they drink in the bars and cafes, they eat in the restaurants and they shop and shop and shop.

“When you go home, how will you describe this to your friends and family?” I asked.

“I couldn’t describe it, I’ll just say we saw a big giant puppet thing and show them the pictures.”

“Will you use words like ‘culture’, or describe it as ‘the arts’ or anything like that; do you know who’s behind it?”

“Nah, I hadn’t really thought about it as art until you’d just said that but I suppose it must be. No one really thinks about who’s paying for it or putting it on – maybe the Council.”

The crowds swelled until every inch of pavement, every raised surface, and every high-rise balcony was filled with excited bodies.

In the distance we could hear the music, on the roof-tops we could see the camera-phones all pointing in one direction. The Giants were coming.

Between the children on shoulders we could make out The Giant in the far distance, confetti cannons blasted to announce his arrival. This was a parade. 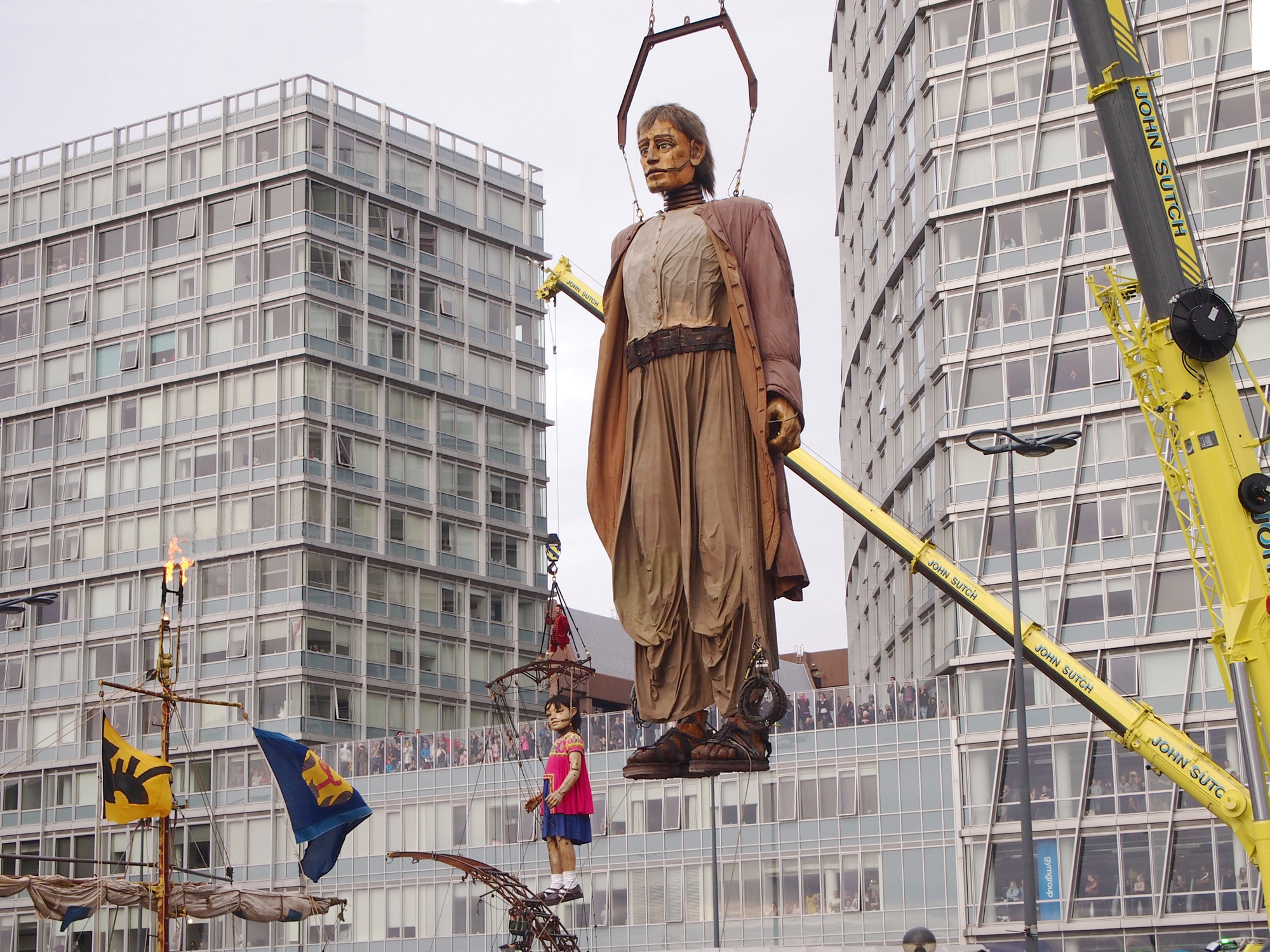 The Little Girl and the Giant take to the air.

And who was with him? It was the Little Girl, a character we’d first seen in London, searching for the Sultan’s Elephant. She’s been back to Liverpool for each visit but the crowd didn’t know she was coming this year. People gasped and cheered and applauded her sight, welcoming home their emigre child.

As the pair reached the dock the music swelled and so did our emotions. The Giant and the Little Girl were lifted high in the air – he onto a raft in the dock, she onto a deck-chair on the back of a truck. Tears were running down the faces of people around me (I might have had something in my eye). We all knew this was not au revoir. Goodbye Little Girl, goodbye giants.

It’ll be a while until anyone is able to tot up the figures from this weekend but previous shows have been said to have benefitted the city by tens of millions of pounds in direct revenue from visitors, and in the enhanced reputation for the city as a location to live, work and invest.

Of course that financial argument is important – if the city brings in multiples of the cost of putting on the show then it has more to spend on looking after the people of Liverpool (and investing in the arts so the UK might produce its own hugely successful cultural exports). 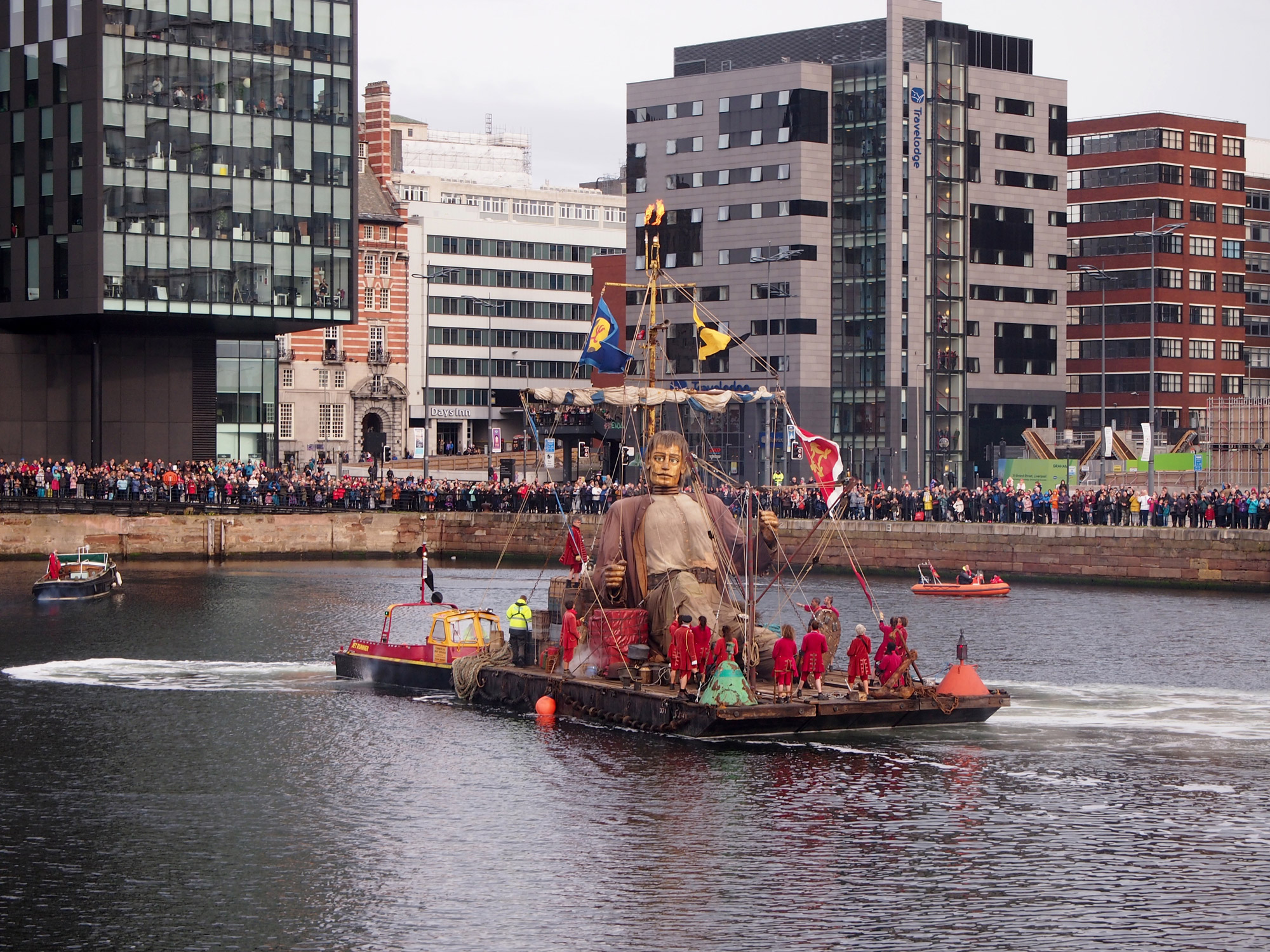 The Giant on his raft on Salthouse Dock.

But the wider impact will surely be felt by the hundreds of thousands of happy people, and by the individual stories they will carry with them.

Who knows how each of their lives may be enhanced by this collective experience?

Who knows what one, or two, or a hundred, or thousands of them may be nudged towards doing more creatively, or with more empathy, or with a touch more humanity, because together we saw the tenderness of a 30ft Little girl, reunited with her 50ft uncle in the Liverpool docks? 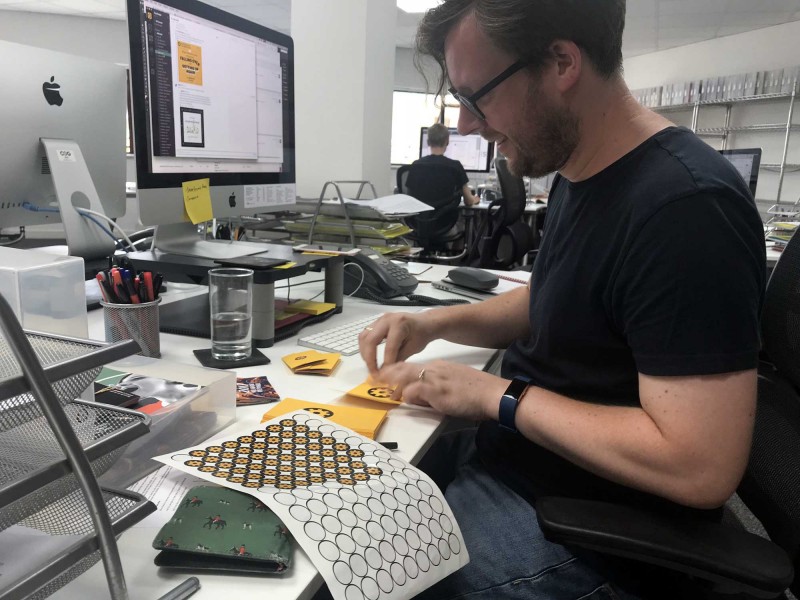 Jack's getting ready for the AMA conference tomorrow in Liverpool, Keep your eyes peeled for his top tips. 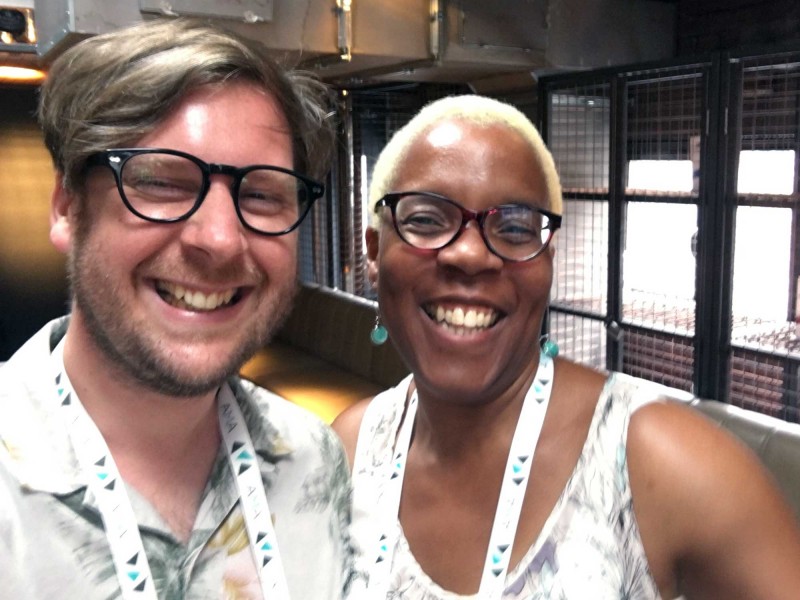 Jack’s at the Arts Marketing Association conference in Liverpool. In his capacity as an AMA Member Rep, he’s having a... 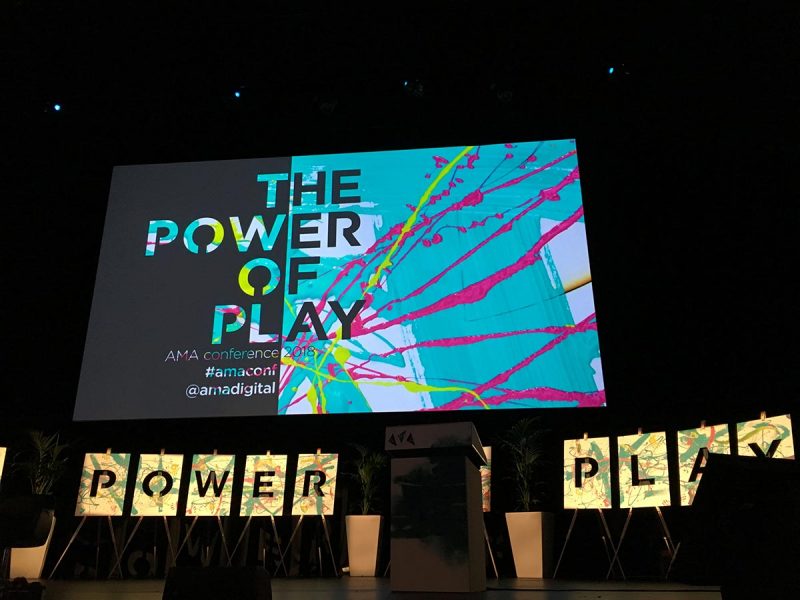 Jack's highlights and top-tips from the Arts Marketing Association’s 2018 conference, titled ‘The Power of Play’, held in Liverpool. 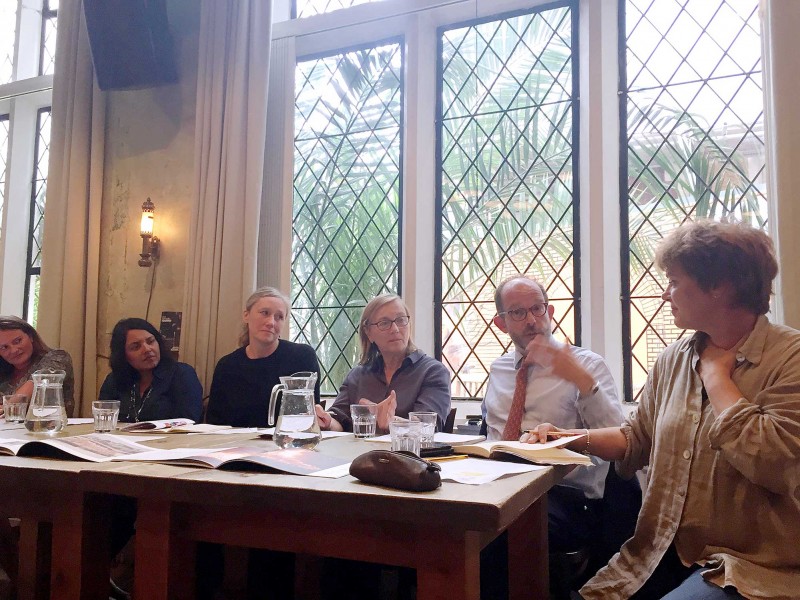 Michael's at Toynbee Hall for an event talking about mass participations arts events, hosted by Artichoke and Artsadmin.