October’s Cog night was ‘Expanded’ at Leake St, the most experimental part of the BFI London Film Festival. There were multiple VR and AR installations where we could dip in and out. Anna reflects on the variety of the evening.

We were enthusiastically introduced to the space by the team, and were then able to choose which experiences to try. The choice was varied in length, technology and subject. Luckily, it being a Monday evening, there weren’t too many queues. Information about the abstract or narrative options was on offer, but it wasn’t easy to take in and make a choice in the moment. So there was more than an element of lucky dip in deciding what to try out.

As there was such a selection, I’ve just noted some memorable moments for myself. You’ll have to ask the rest of the team for their favourites if you want a more rounded review. There was more work than any one of us could try in an evening.

I started with Walzer by Frieda Gustavs, Leo Erken, this was a landscape made up of photos. It had a beautiful, ghostly feel and was truly interactive in that I could walk around in any direction and see different perspectives on the landscape. There was a brilliant sense of scale and expansiveness that worked really well in VR.

While I enjoyed this, it was a little difficult to know how long to stay in the experience, especially when there were so many options on offer, I wasn’t sure if I was missing anything, or if there should be a narrative to follow. I left the landscape of Walzer, eager to see if another option might live up to the promise of an immersive and interactive experience that VR promises to offer us.

Spencer, experiencing one of the end-of-the-world narratives.

I tried All Unsaved Progress Will be Lost by Mélanie Courtinat. Words from a poem appeared, suspended, which you followed through an abandoned landscape. It evoked a narrative in a civilisation wiped out by a disaster of some kind.

Unfortunately, the writing (possibly in its translation) felt lacking, and might have been more emotive and intimate if it had been performed as a voiceover. It did give clear direction and guidance, but it felt like another experiment which wasn’t quite realised as well as it could have been.

Moving around the space, it was great to see that the festival hadn’t stuck solely to VR, there were huge screens and areas to try AR with ipads. It was open and exciting, making sure that experimentation was embraced. 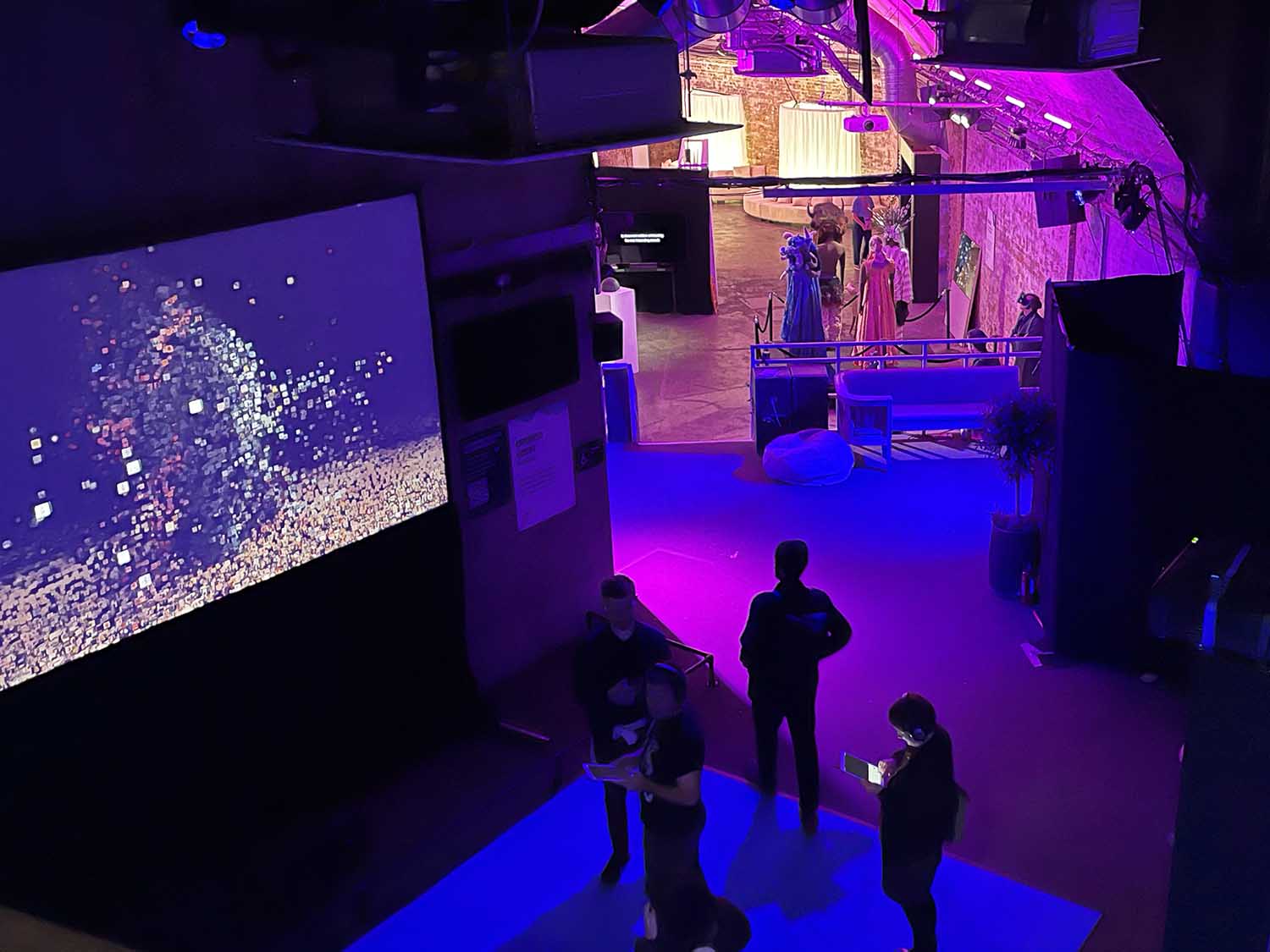 The main hall from above

Remembering the invitation when we arrived to step behind a dark curtain at the back of the room, I made my way into Framerate: Pulse of the Earth by Matthew Shaw, William Trossell and ScanLAB Projects.

This was a room with multiple screens and angles – wall mounted, leaning and even flat on the floor. It was a quite a relief to be able to appreciate the room without the need for the headgear that we had to clamp around our heads for others. The screens showed time-lapse landscapes, played at speed, based on 3D scans. It felt like we were allowed to zoom out on the world taking in the beauty of natural landscapes, breathing, as well as viewing human intervention from another perspective. I was mesmerised and actually for the first time felt truly immersed (as I couldn’t hear the people next to me struggling with headsets, or having a chat).

I finished with The Choice by Joanne Popinska, which was the hardest hitting piece of the night for me. This was a documentary, which is not something I would have associated with the VR medium. We met Kirsten, who told us her story of being misled and denied treatment, in Texas, when the baby she was carrying had serious abnormalities.

Kirsten talks directly to you, and there are options to select questions to see her response, continuing her story. Initially this felt like a gimmick, but it allowed me to pace myself, as the story became more personal and distressing. I appreciated the intimacy of hearing from Kirsten and interacting in this way. Animations augmented the simple filming of Kirsten talking to us.

This was one of the most successful pieces of the night – the narrative was at the heart and the technology was used sensitively. Where others felt designed with the technology first, it was used here to great advantage, serving the story.

The evening was a mixed success. That’s OK; I think it’s important that experiments aren’t going to work out every time, and it’s great to see what people are trying. I also know that the whole Cog team had different experiences, and it was great to hear what people thought worked well (or didn’t).

I hope BFI London Film Festival continue supporting this type of work alongside the huge film programme on offer. I’ll be excited to see how these experiments can be pushed forward in years to come.

Illustration by Amy Lauren for our Cultural Calendar.

Michael's on film 13 of this year’s London Film Festival. It was great to see director Goran Stolevski at the... 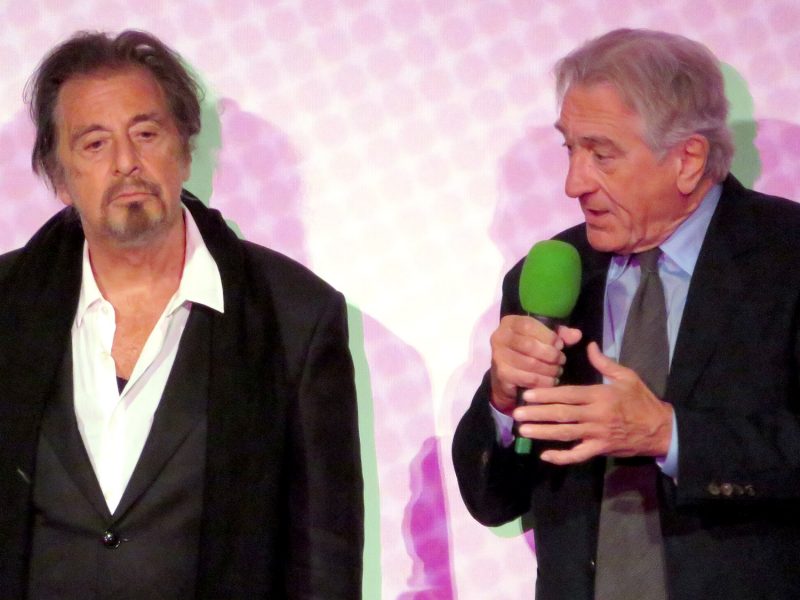 Dan's morphed into Björk as the team enjoy the new Utopia album. 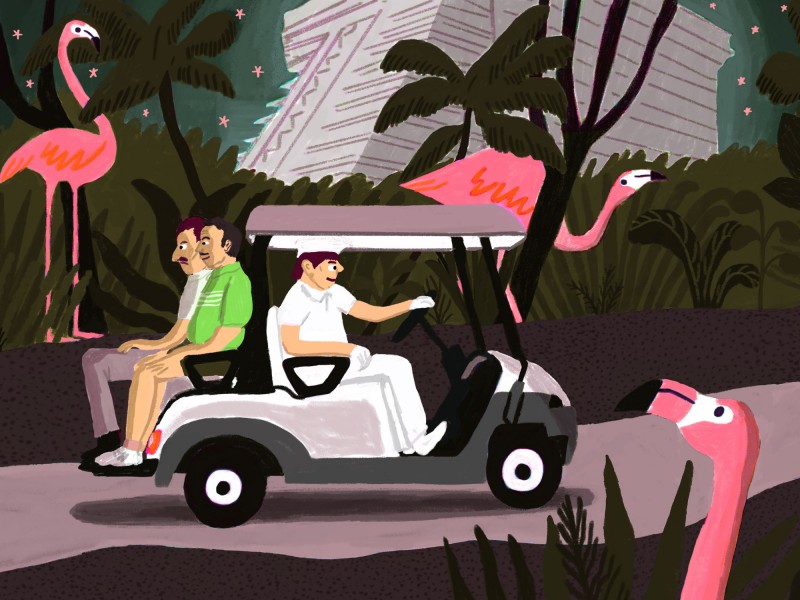