At the Giardini site, permanent pavilions (like art embassies, or sometimes more like Disney’s Epcot) have been built by different nations through the Biennale’s history. By 1914, there were six: Belgium, Hungary, Germany, Great Britain, France, and Russia. There are now 30. There’s also a huge dedicated space where the curator (currently Christine Macel) hosts their own thematic programme (I’ve written a little about that in a previous entry).

I’m not going to attempt to talk about all of the pavilions, instead I’ll pick out a few highlights and curiosities. 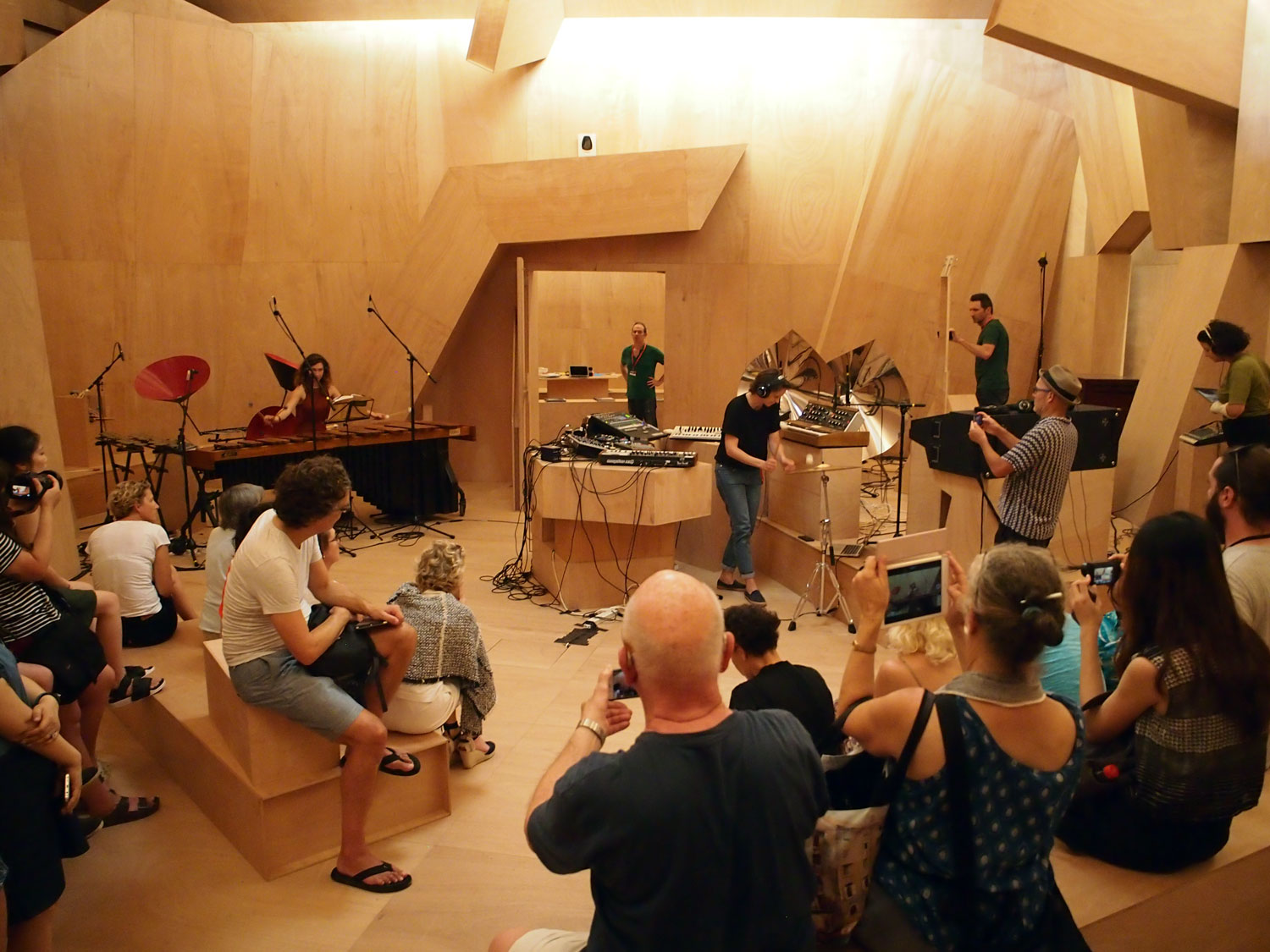 I’m starting with France because I found theirs the most fascinating space.

Curated by Christian Marclay and Lionel Bovier, they have commissioned Xavier Veilhan to turn the pavilion into a working recording studio. More than 100 ‘artists’ from across the globe have been invited to come and make music in the space. These aren’t concerts or performances, these are artists working in their studio. If you are a visitor then you are a witness not an audience.

The whole thing seems to be a conceptual gag, around the words ‘studio’ and ‘artist’.

I knew nothing of this and just wandered in, out of the sun and into an incredible session with percussionists accompanying a hypnotic vibraphone player. I sat, soaked it in and wandered away. When I came back an hour later, the room was empty.

If anyone knows who the vibes player is, I’d love to find out.

Pavilion of the Republic of Korea 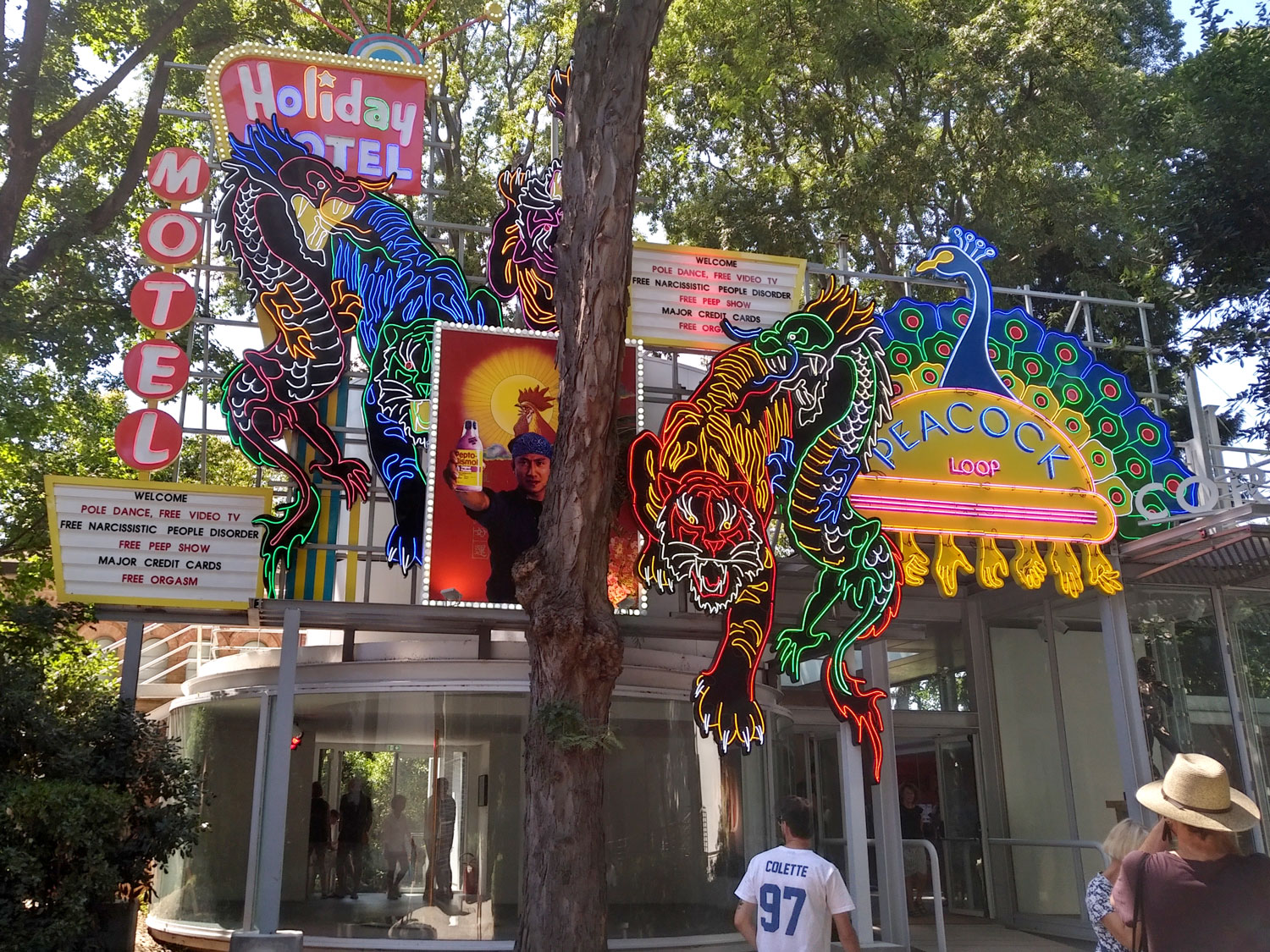 Counterbalance: The Stone and The Mountain, Cody Choi and Wan Lee

The Koreans are having fun. The outside is a huge neon advertising sign, offering ‘Pole Dance, Free Video TV and Free Narcissistic People Disorder’. 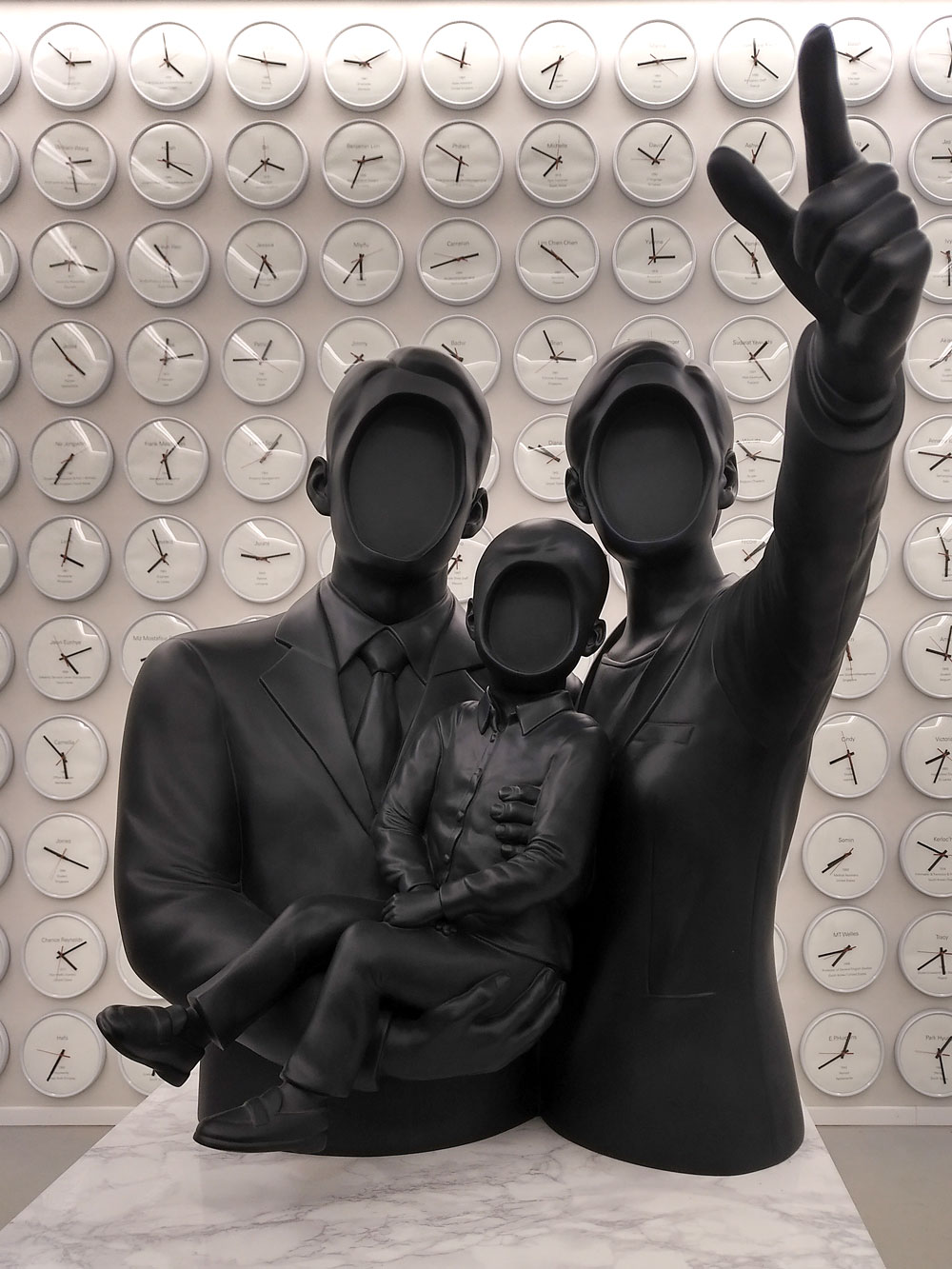 For a Better Tomorrow in front of Proper Time – Through the Dreams Revolve with the Moon, Lee Wan

Inside, the space is filled with works by Cody Choi and fellow Korean artist Lee Wan.

Another room is filled with the faces of clocks, behind the faceless model of a nuclear family. The clocks turn at speeds to denote the time it takes for different people to earn the price of a meal.

The building is chaotic, disjointed, dystopian and more than a little tongue in cheek.

As if to underline the lack of theme, propped up against a wall was a poor reproduction of Munch’s The Scream (once the world’s most ‘valuable’ painting) affixed to the word ‘Shit’. 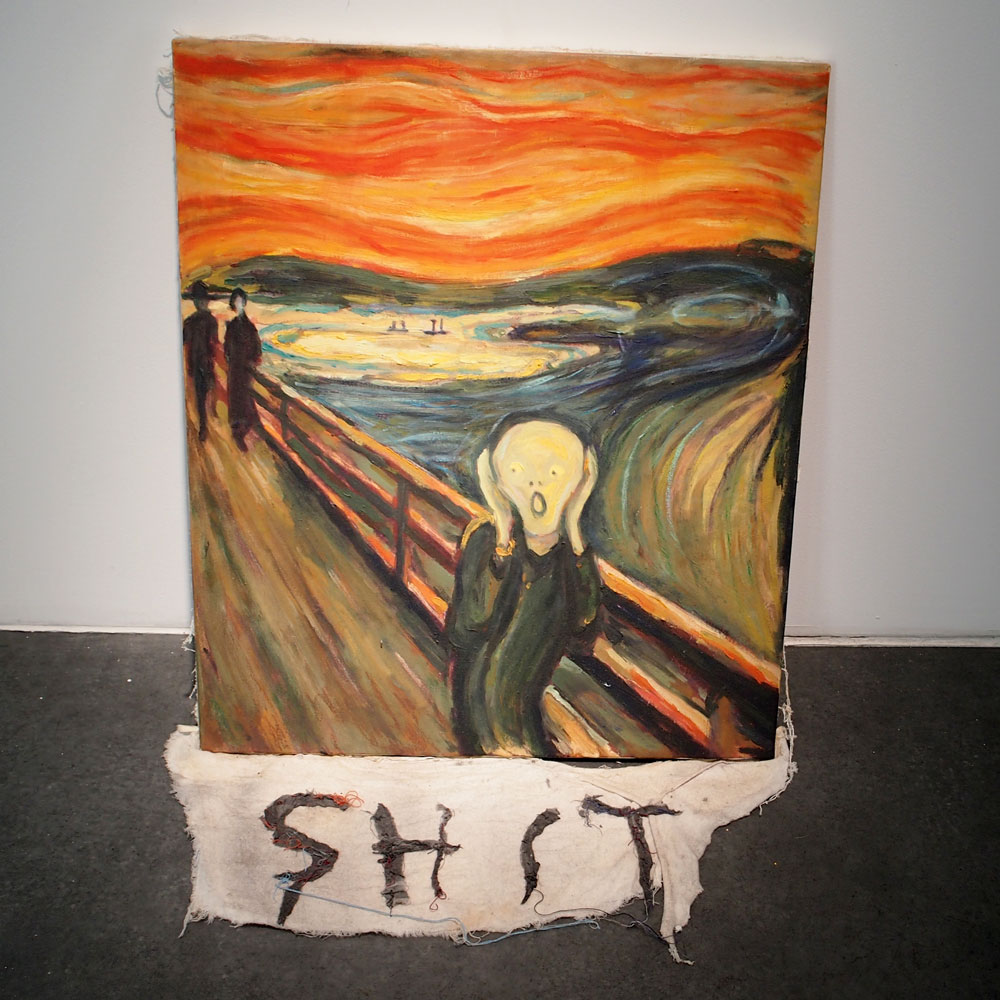 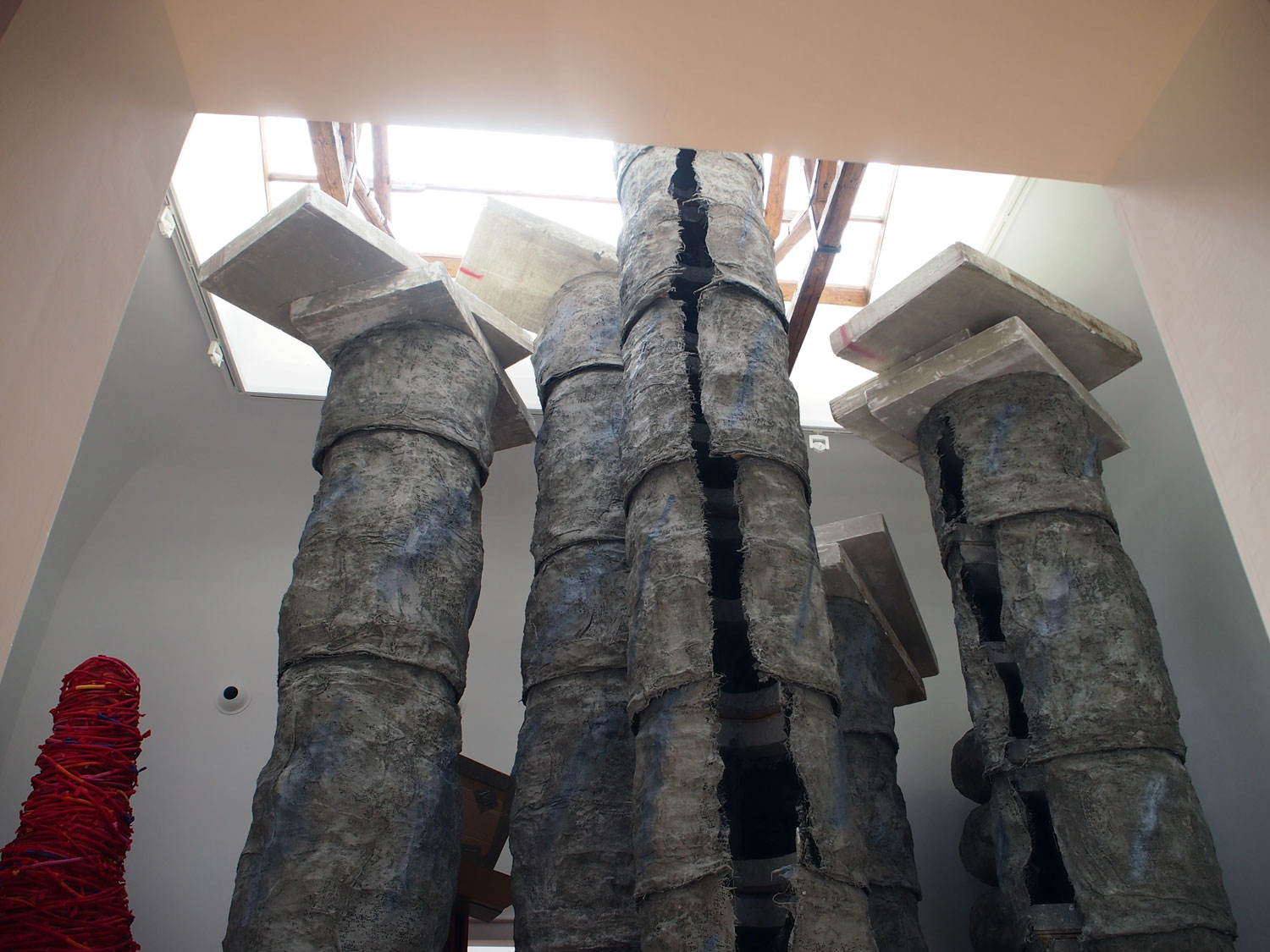 Next stop on my random world tour was the British Pavilion.

Phyllida Barlow isn’t messing about but she’s confident in her execution. Folly is an entirely site-specific takeover of the pavilion. Using her characteristically low-tech approach she has filled the space with gigantic objects.

Huge columns rise through the centre of the largest room, with slabs of stone balanced precariously atop. But the columns aren’t solid, they are hollow fibreglass, and to reinforce that point, there’s a large gash, top to bottom so you can see the workings inside. They feel like they could topple at any point. 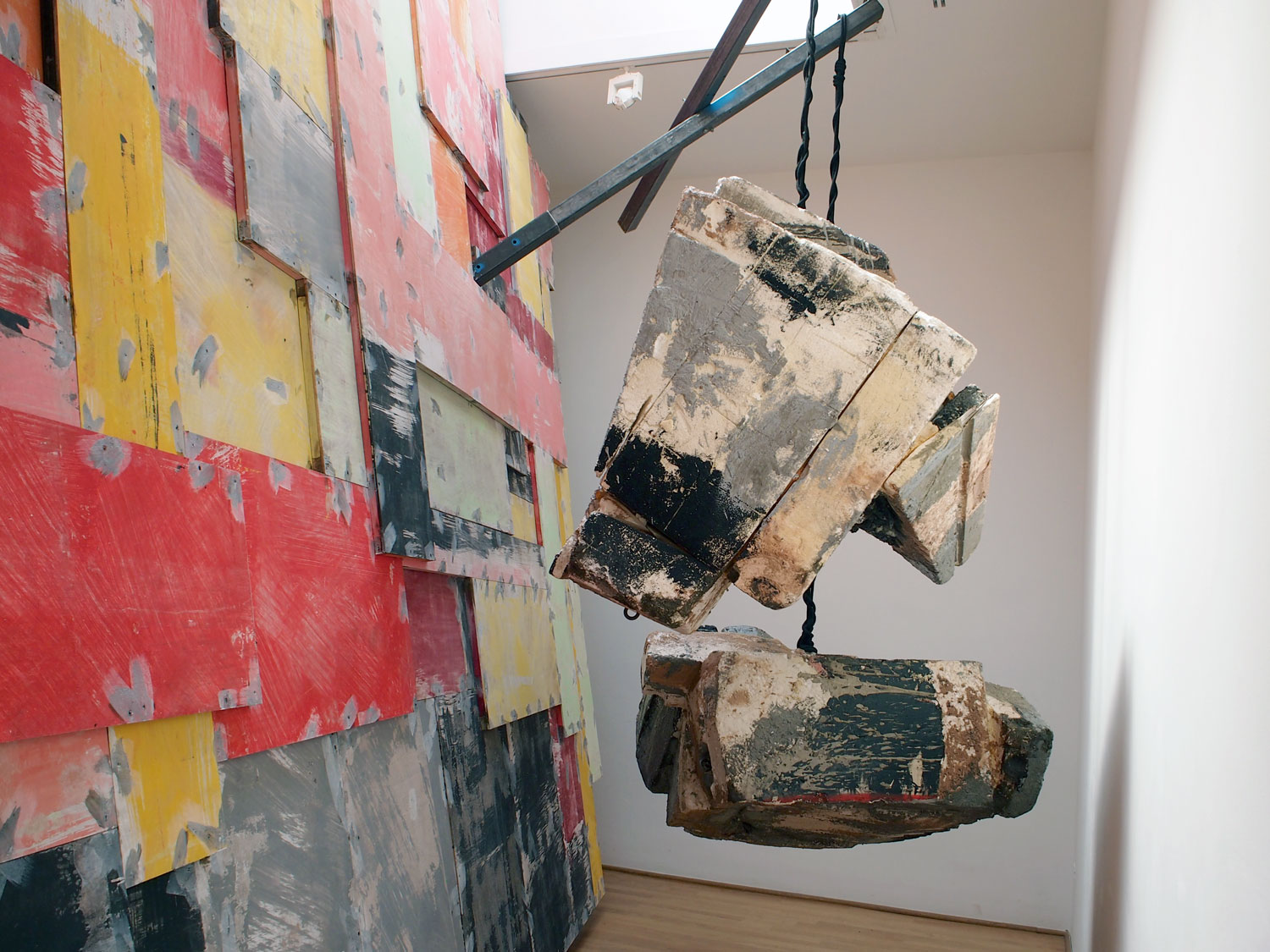 Boulders hang from chains, their weight seemingly counterbalanced by the angled wall they are attached to. Maybe the ropes  are about to snap, or maybe those boulders are as light as a feather. 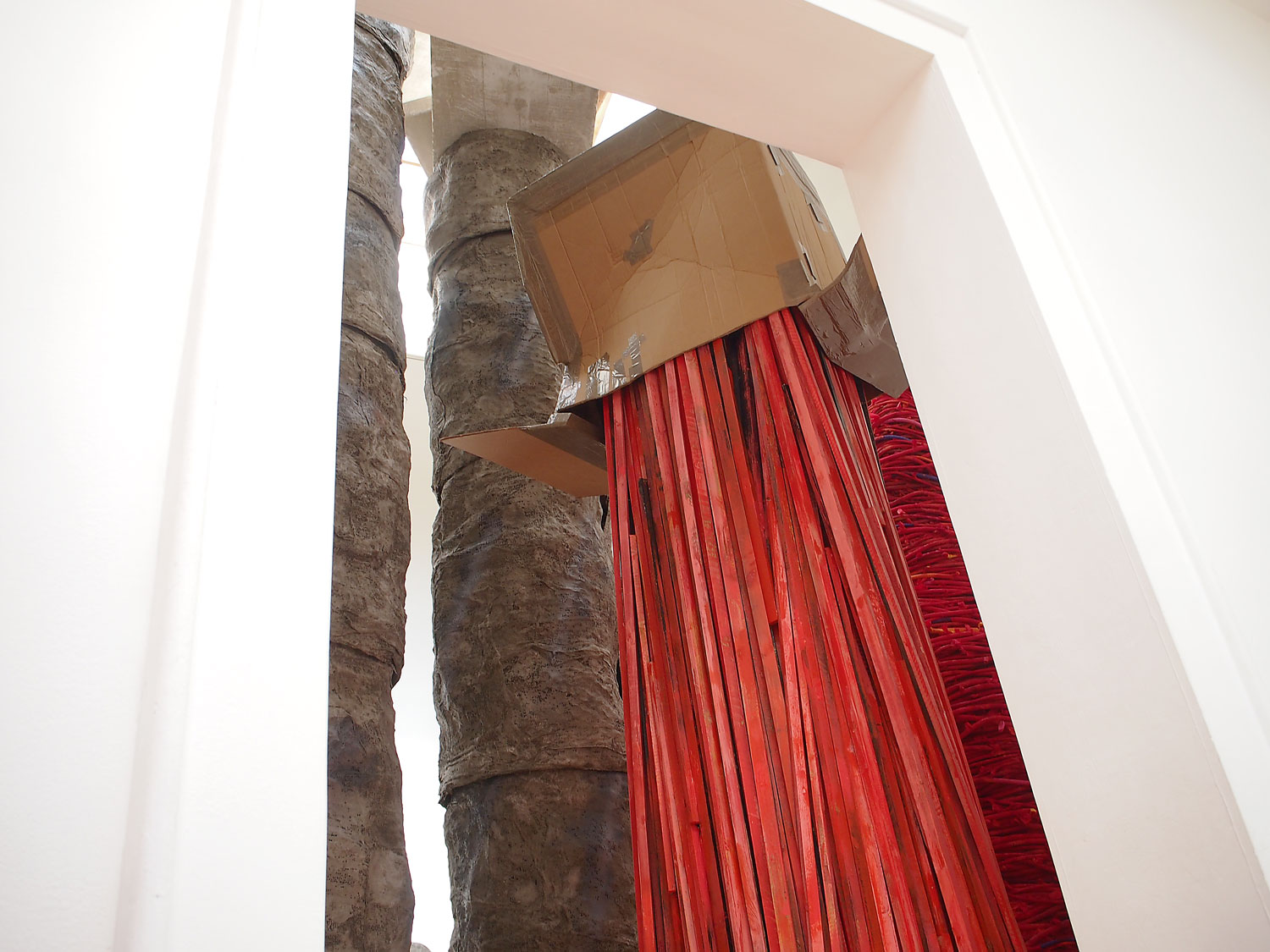 Gravity seems defied as red, erm, sticks seem to pour from a cardboard box in the air.

Everything is too big to take in, too gargantuan to process from within the space. So doorways frame the work and become a key part of the experience. 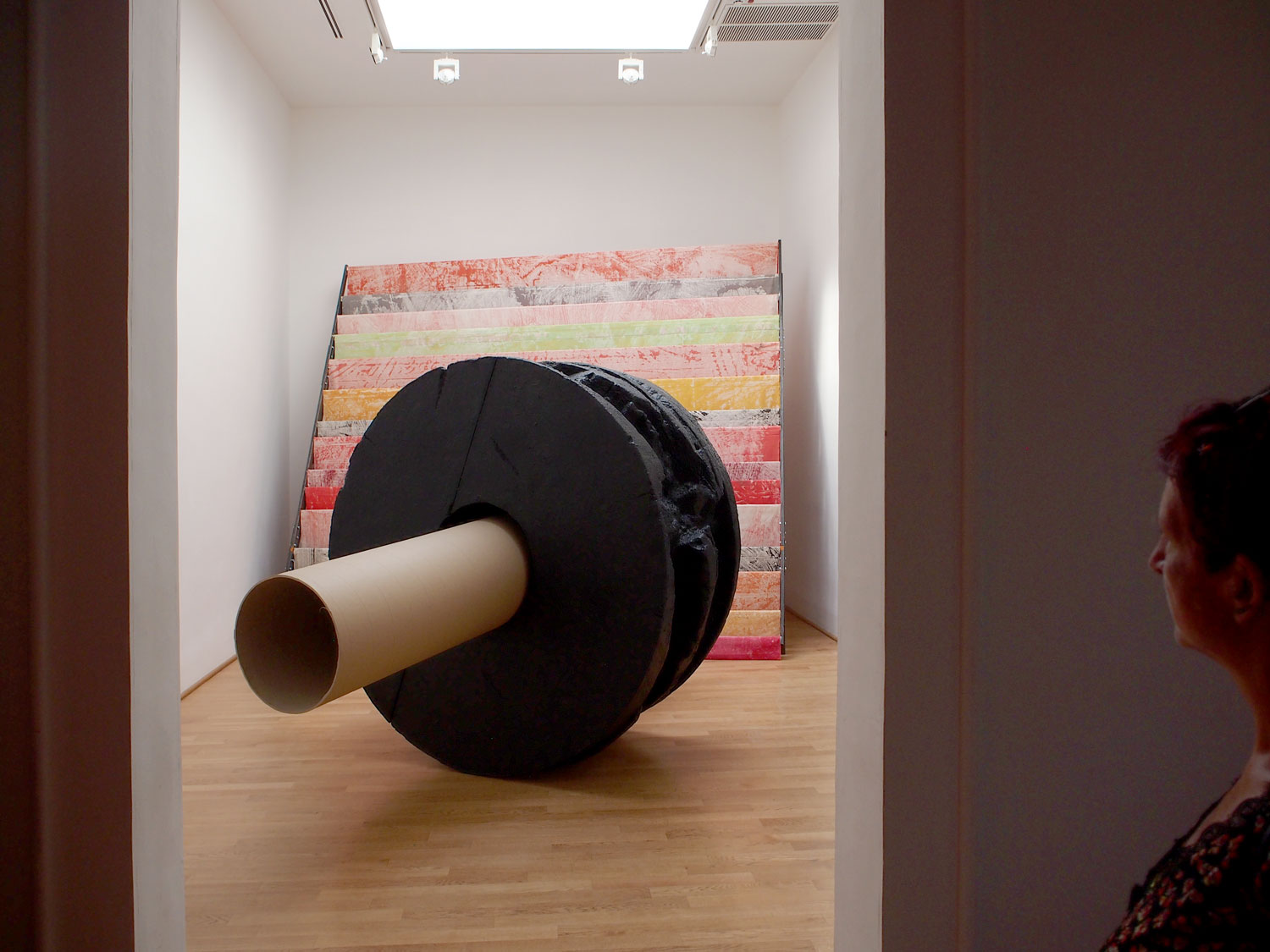 And just as you think you’ve got a grip on this folly, you turn into a room that seems to contain a rack of wrapping paper, with its discarded cardboard tube, pushed through a spool to make a wheel. Or maybe it wasn’t supposed to be that at all. 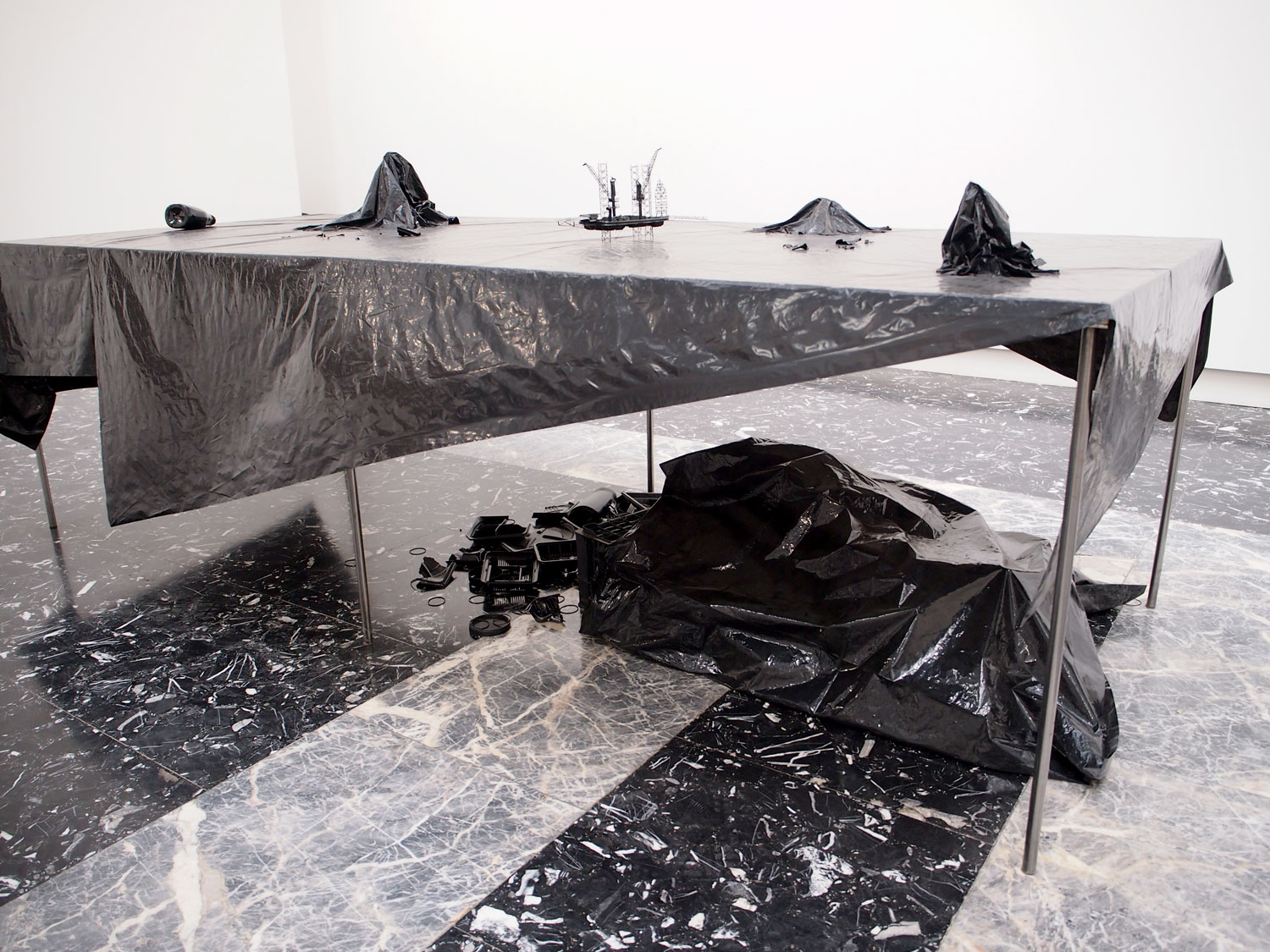 Born in Hiroshima, you can understand why Takahiro Iwasaki is preoccupied with history.

I assumed that the title Turned Upside Down, It’s a Forest was fairly self evident. Oil comes from millions of years of decayed forests, we’ve exhumed that material and turned it into plastics, clothing and consumables. But, according to the blurb that comes with the show, it’s all a lot more complex than that. The title references Venetian novelist Tiziano Scarpa who talked of the never ending forest of stakes driven into the Venetian lagoon. 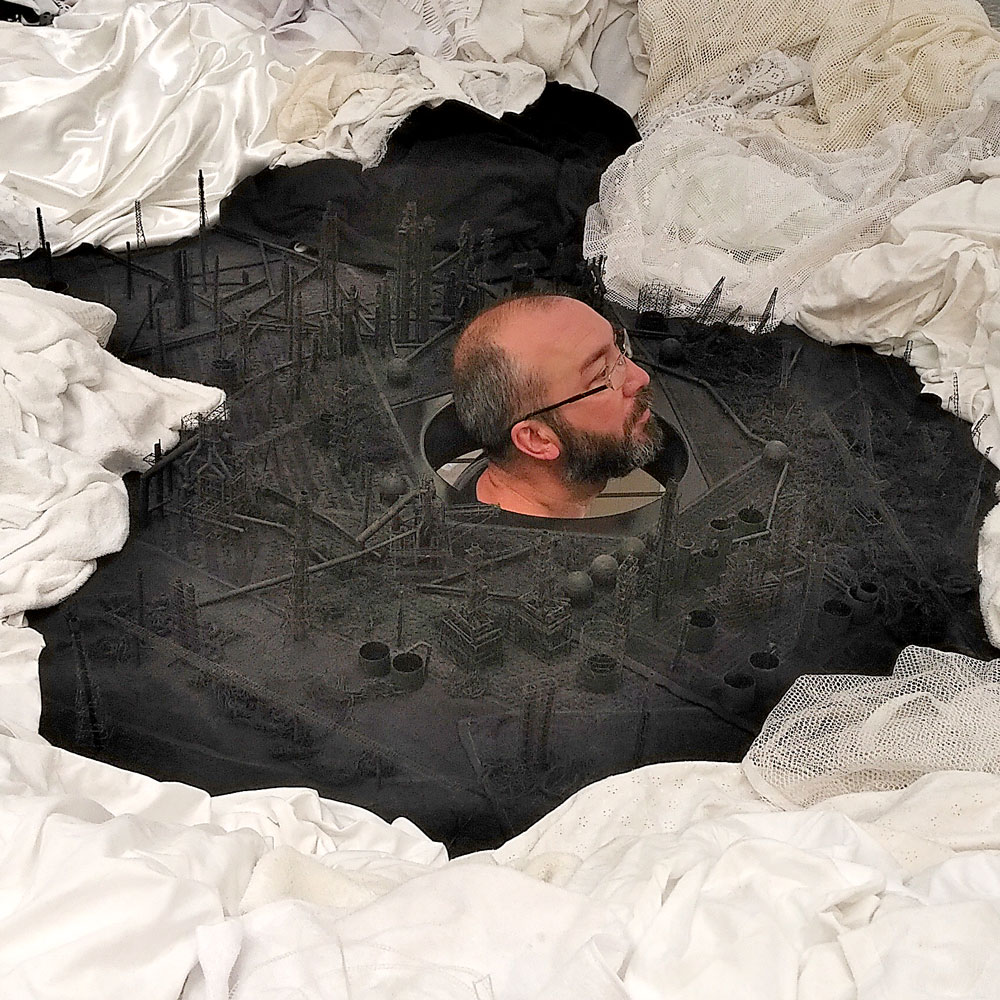 Out of Disorder (Mountains and Sea), Takahiro Iwasaki

Still, my theory seemed to hold some credibility as I popped my head into the middle of a miniature power plant. Tiny black models, crafted by the artist, from the synthetic fibres of white clothing. 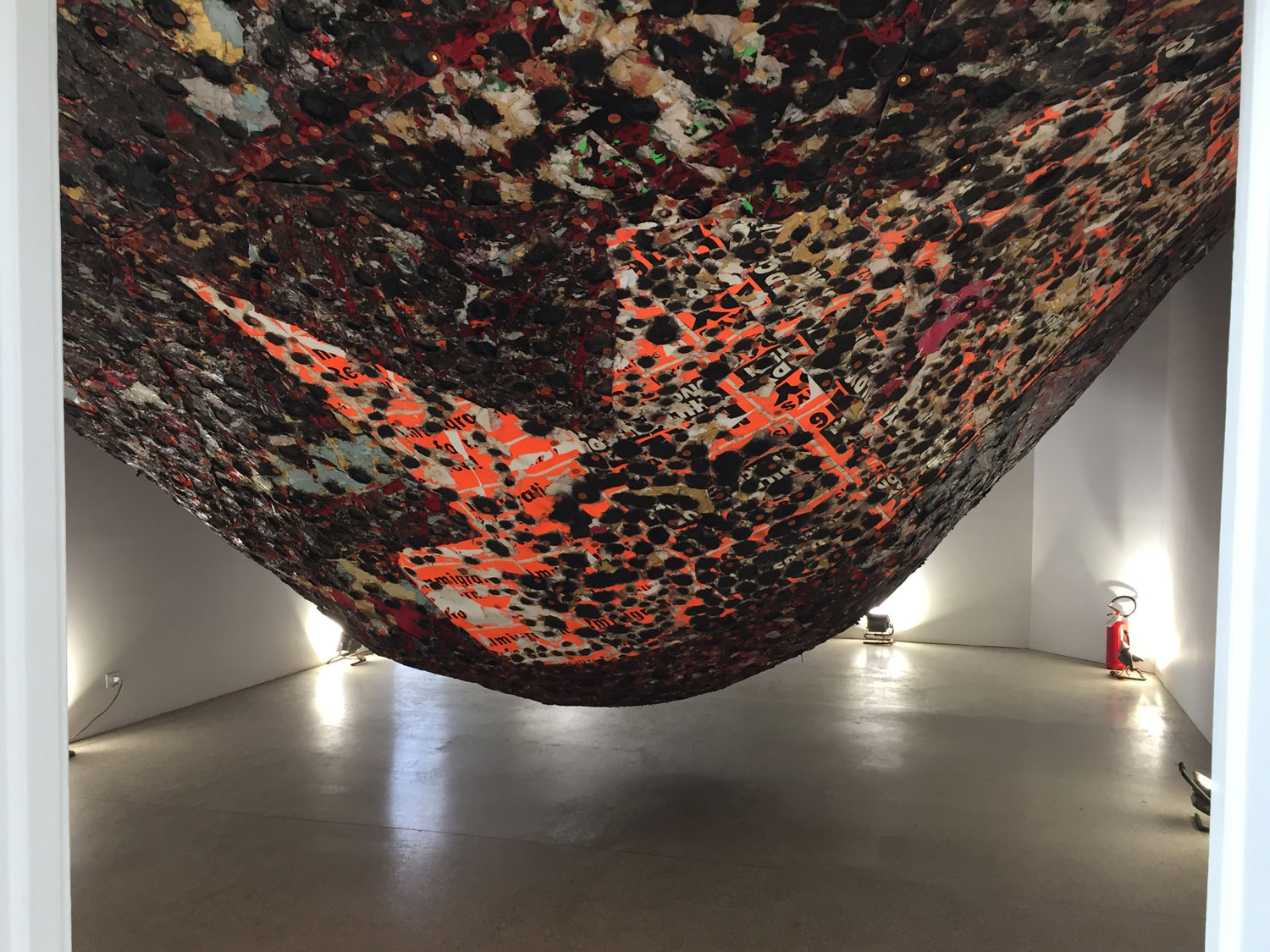 Tomorrow Is Another Day, Mark Bradford

I know Mark Bradford is a great artist because people tell me so. But I did find his installations a bit underwhelming.

It was a clever idea to make the entrance through a side door, rather than the through the grand Palladian portico. It’s a deliberate reference to the way black workers would have been obliged to enter such buildings in the not too distant past.

I also quite liked the way the first room was occupied by a tumorous installation, hanging from the ceiling. So large was the growth that we had to skirt around the edges.

But the rest left me a bit cold, until I got to the final room. That was occupied by a video installation of (I think) Bradford walking down the street. But however much he strides and sashays, he seems to make very little progress. Halfway down the street the video stops and starts back at the beginning. I don’t know how they did it, maybe it was just a clever use of perspective. 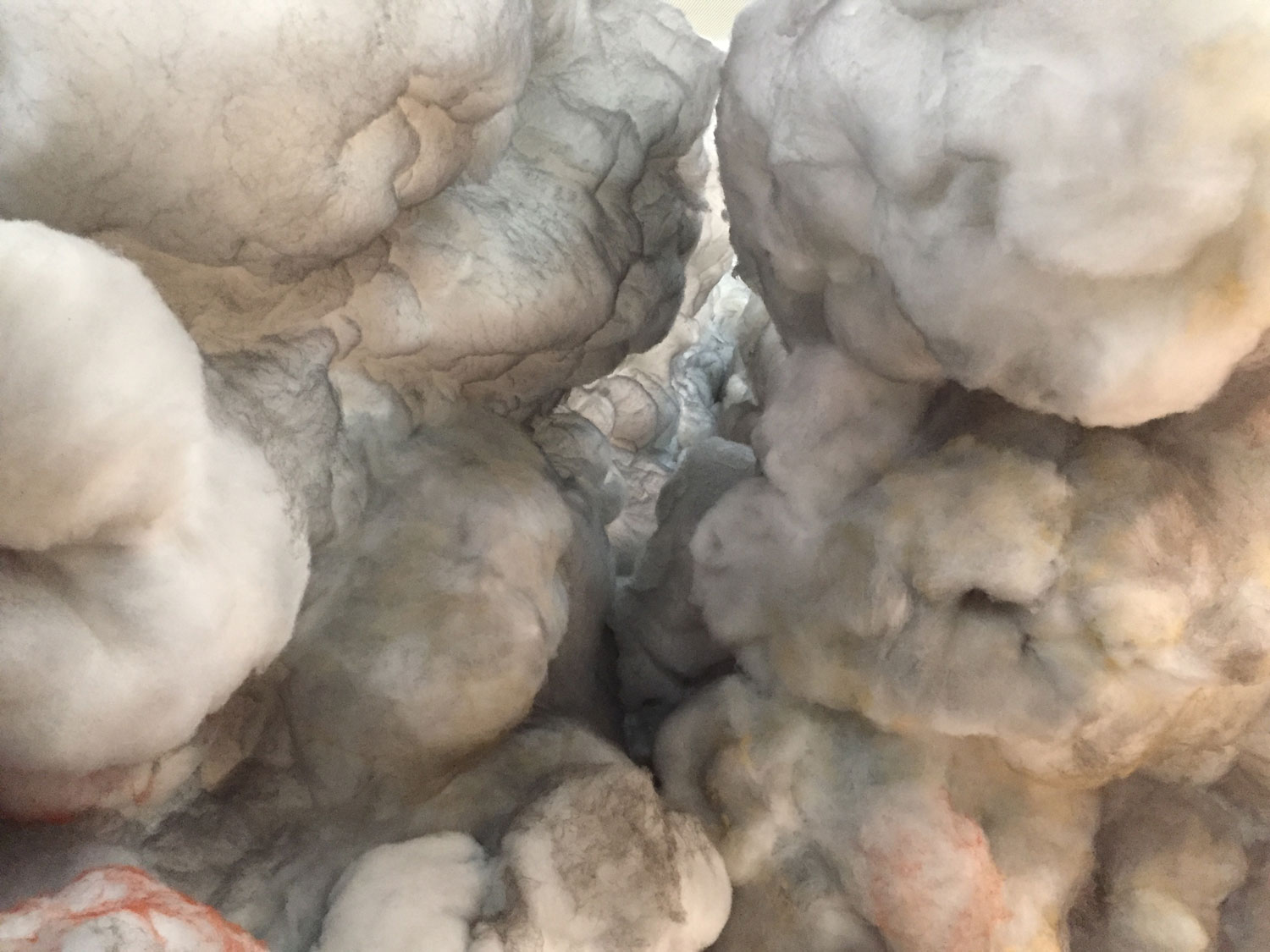 Right next door to the US pavilion (one wonders about the politics involved in that location) is the Israeli pavilion.

As you enter, there’s a sign warning visitors of the health risks of mould within the building. But this wasn’t through lack of maintenance, the artist Gal Weinstein has introduced lots of different types of mould and spores, some real, most artificial.

Upstairs is El al, a growth that fills a room, created from styrofoam and wire-wool. 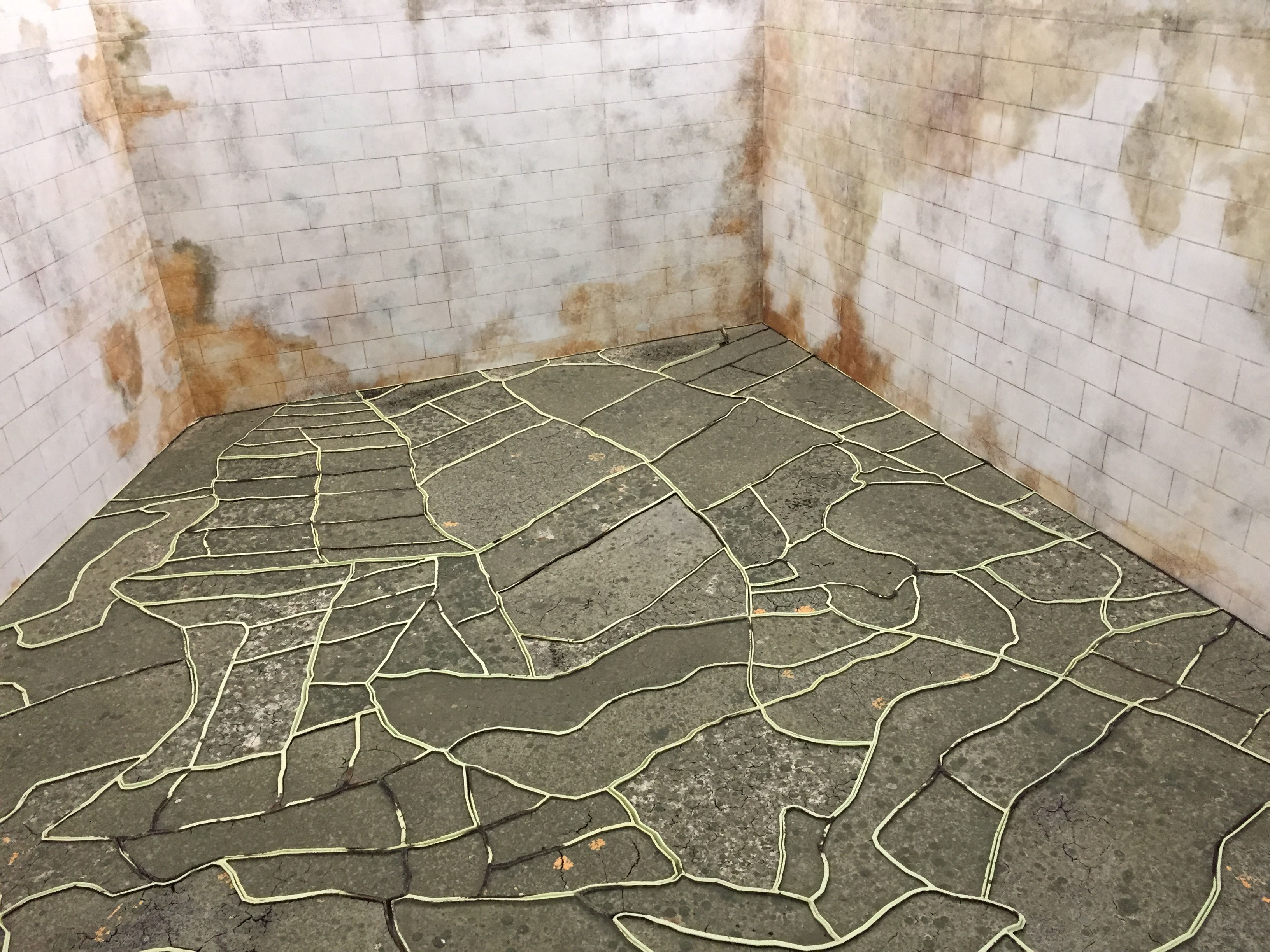 The whole installation is called Sun Stand Still. It references the miracle of the Israelite leader Joshua bin-Nun, who commanded the sun to stop its course so he could win a battle before darkness fell.

In the piece Jezreel Valley in the Dark the artist has filled agricultural plots shaped areas with coffee dregs. As the exhibition continues, those plots will begin to grow and flourish, with mould. 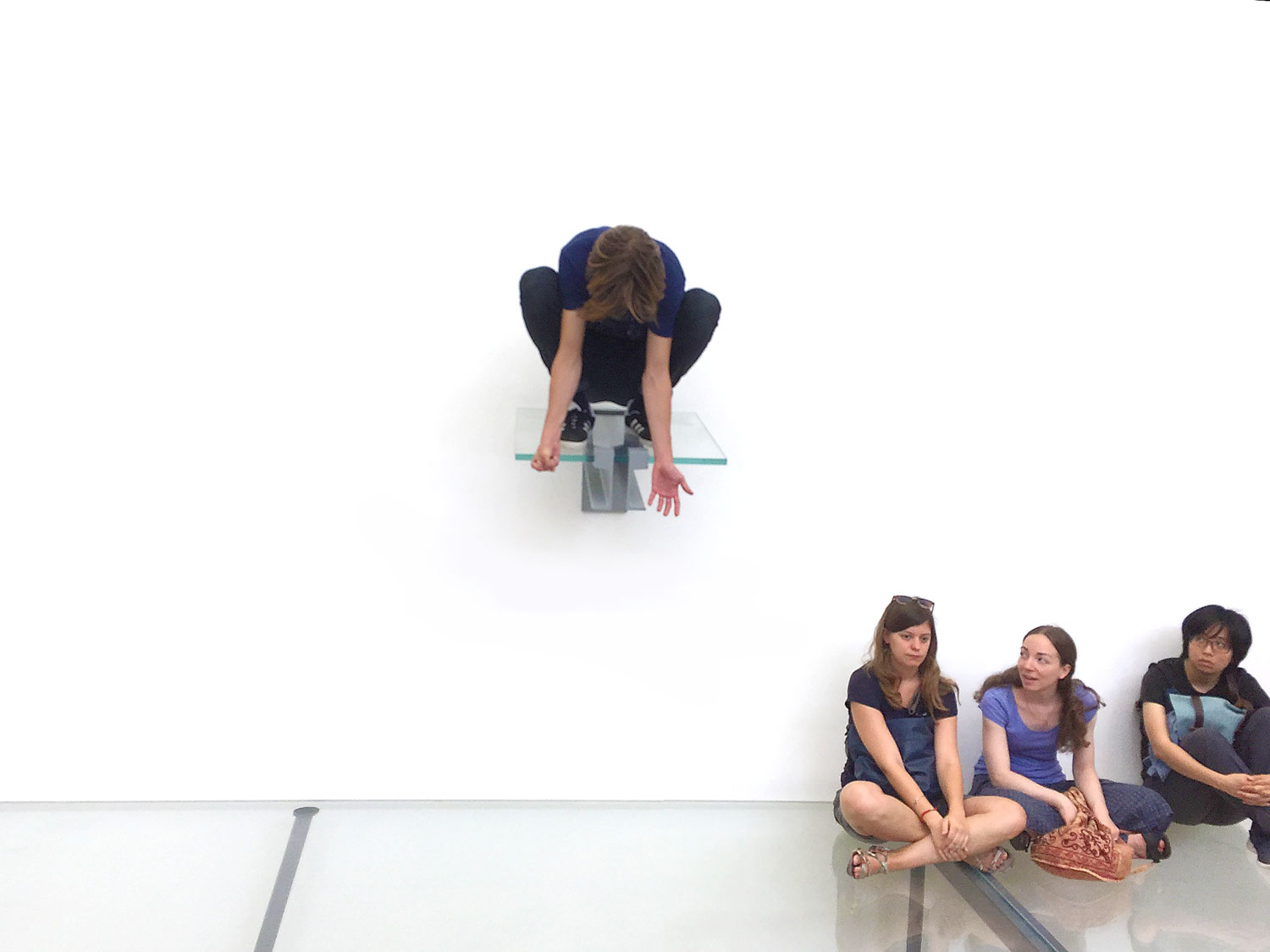 The German pavilion has been lauded by the critics, and won the Biennale’s Golden Lion for Best National Participation.

Anne Imhof has created a performance piece (actually two) that examines sexual politics, exploitation and the dynamics of power. Most days, the performance is a choreographed two hours, but on infrequent occasions the action stretched to five hours with more aggression and freedom. 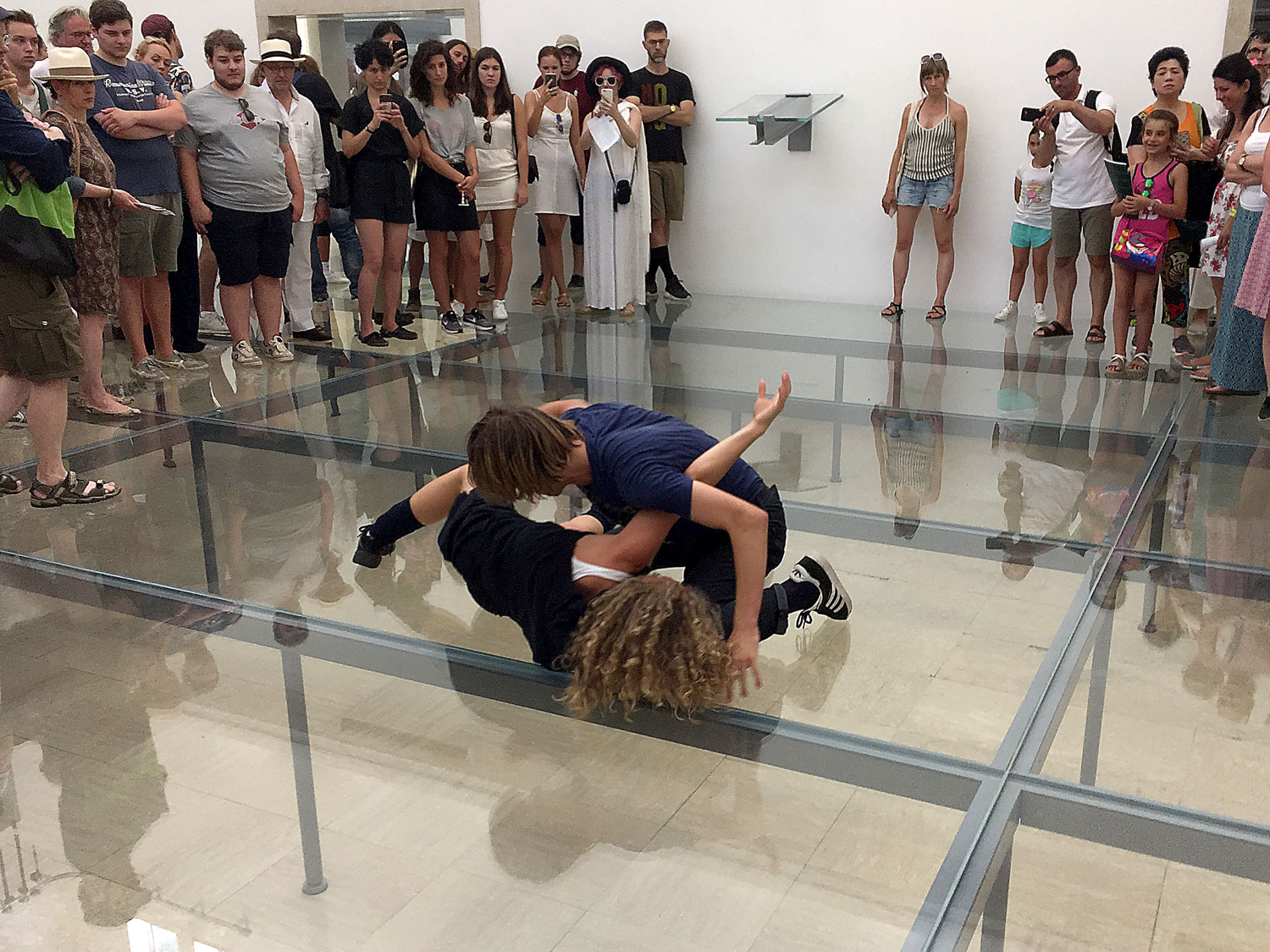 She has transformed the building into a kind of internment camp. There are fences around it, patrolled by doberman dogs. Actually the dogs are placid bitches who look like they’ve been used to farm puppies, so maybe that’s a commentary on exploitation in itself. They’ve installed a raised glass floor, platforms and instruments of torture, where performers move above, below and through the crowds that are allowed to enter in controlled numbers.

But I didn’t know any of that in advance. I was just lucky, spotted a queue and joined it (before I had any idea where it might lead me) and got into one of the two hour performances. 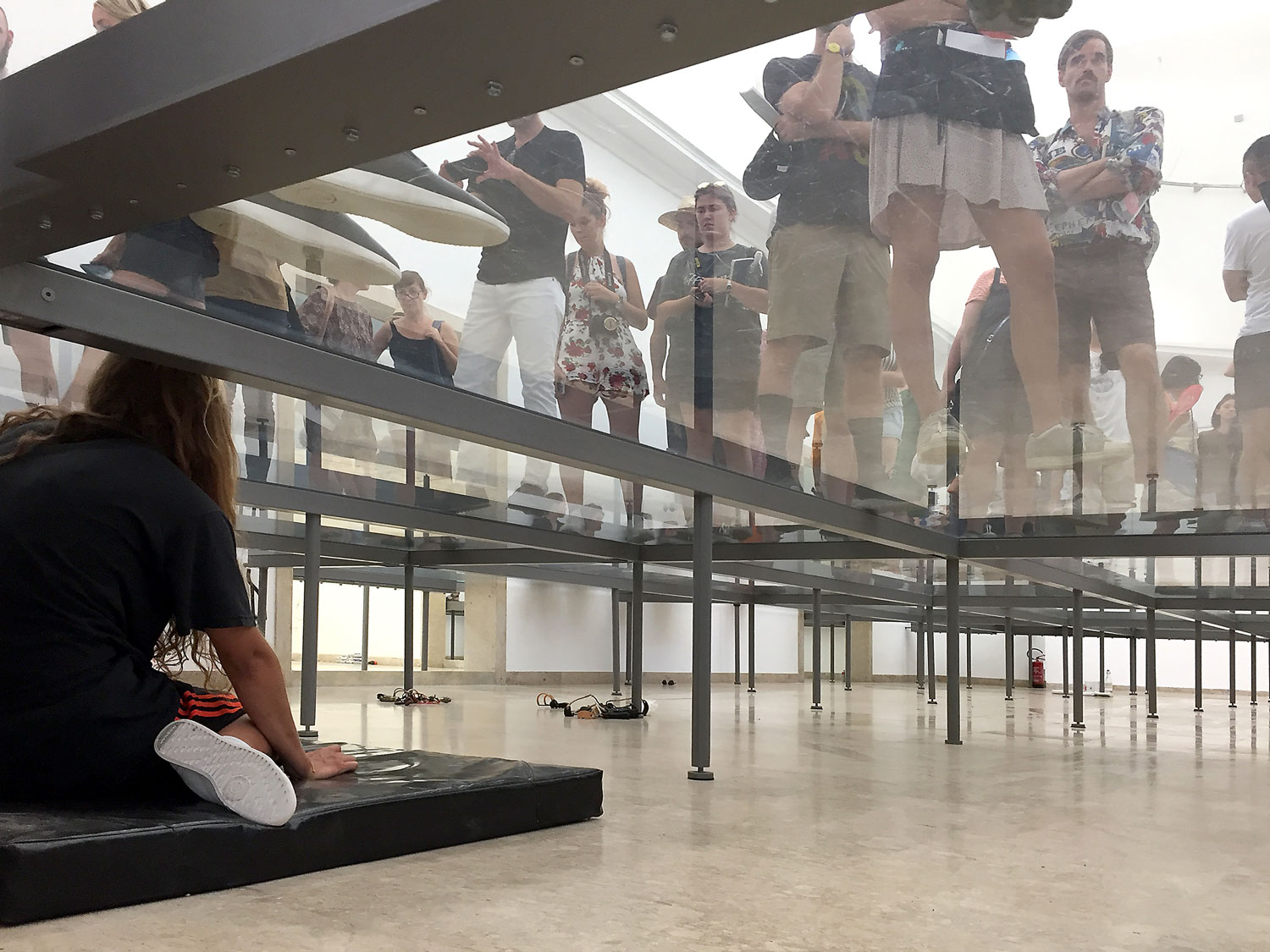 It was an unsettling experience to be in there. The fascinating part for me was watching the audience treat performers as objects – staring, photographing, ignoring, chatting with their friends.

But I didn’t stay too long as actually it was all a bit overly conceptual, compared to something like an immersive performance from theatre company Punchdrunk. 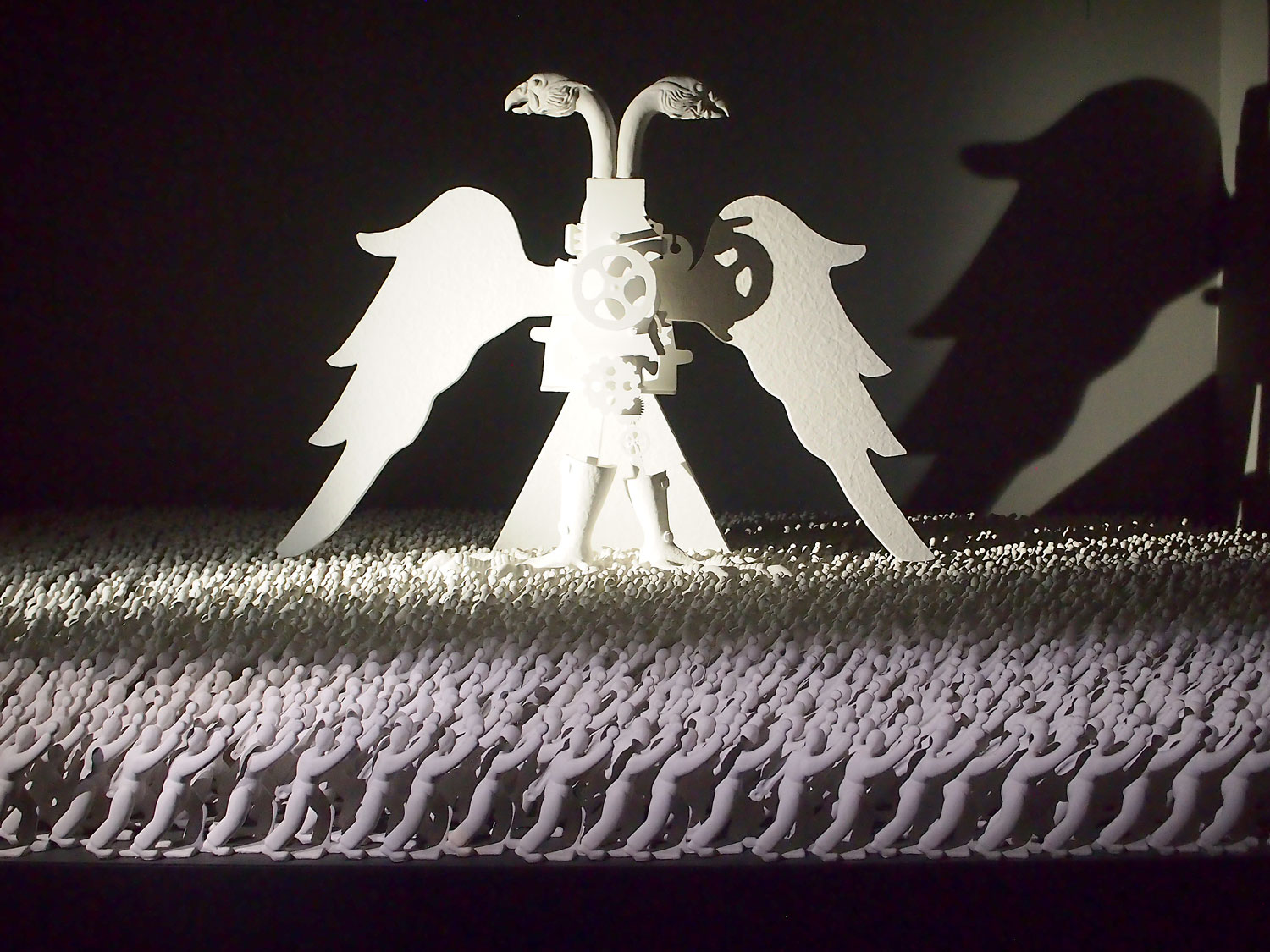 There was little messing around with conceptualism in the Russian pavilion. Titled Theatrum Orbis (Theatre of the World), the Russian team (called Recycle Group) had worked together to create a consistent pavilion with each artist adding to the theme. 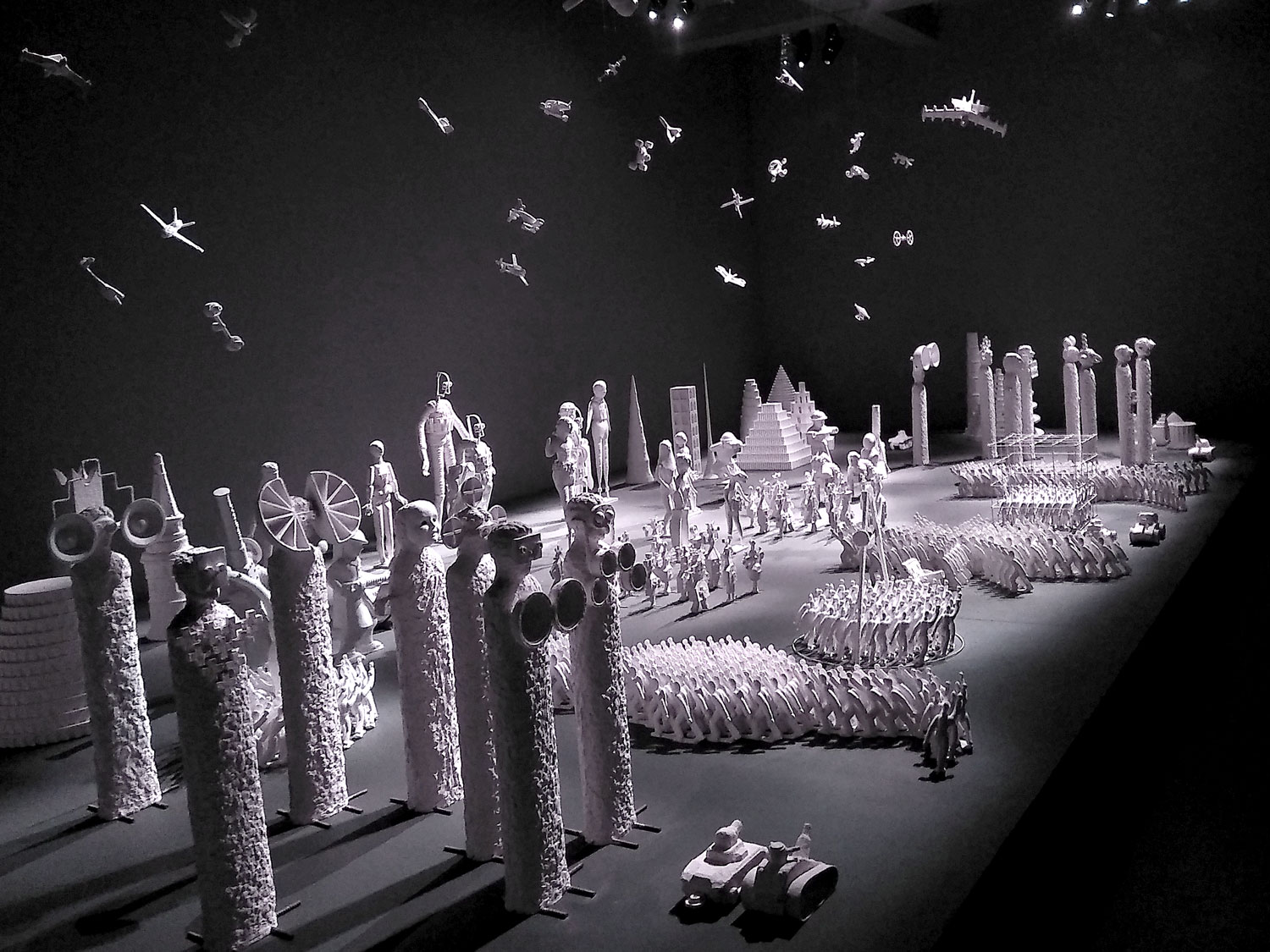 There was a lot of totalitarianism, lots of oppressive overlords, and a fair few people oppressed and trapped by those powers.

They did make the mistake of thinking that people would download an app to interact with some work (bodies trapped in concrete overcoats) but we can forgive them that naivety, especially as they provided iPads to play with. 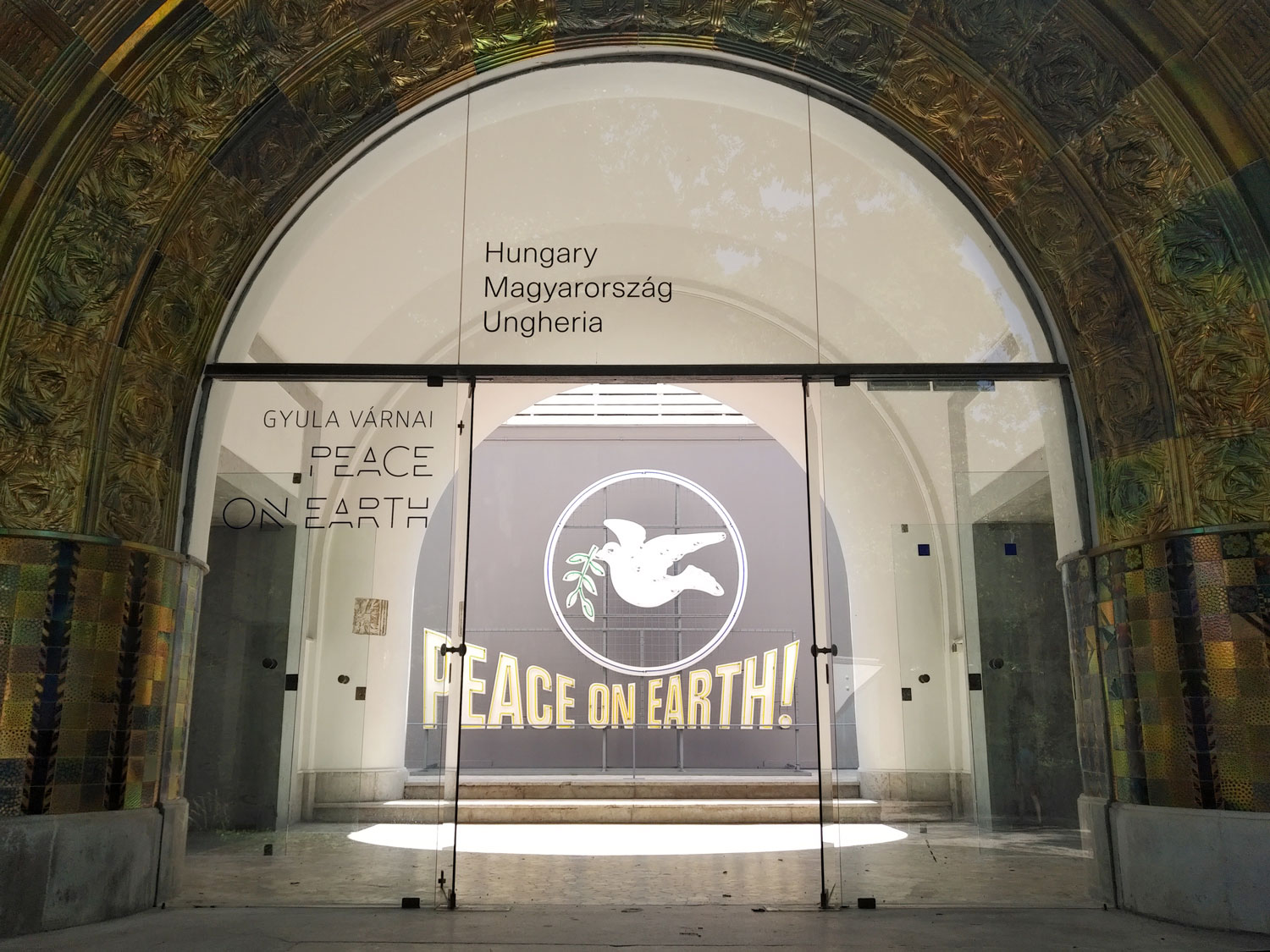 The Hungarians have a beautifully decorated building and they haven’t buggered it about. Instead, artist Gyula Várnai has placed various pieces that reference optimism and pessimism. The show is passive-aggressively called Peace on Earth! 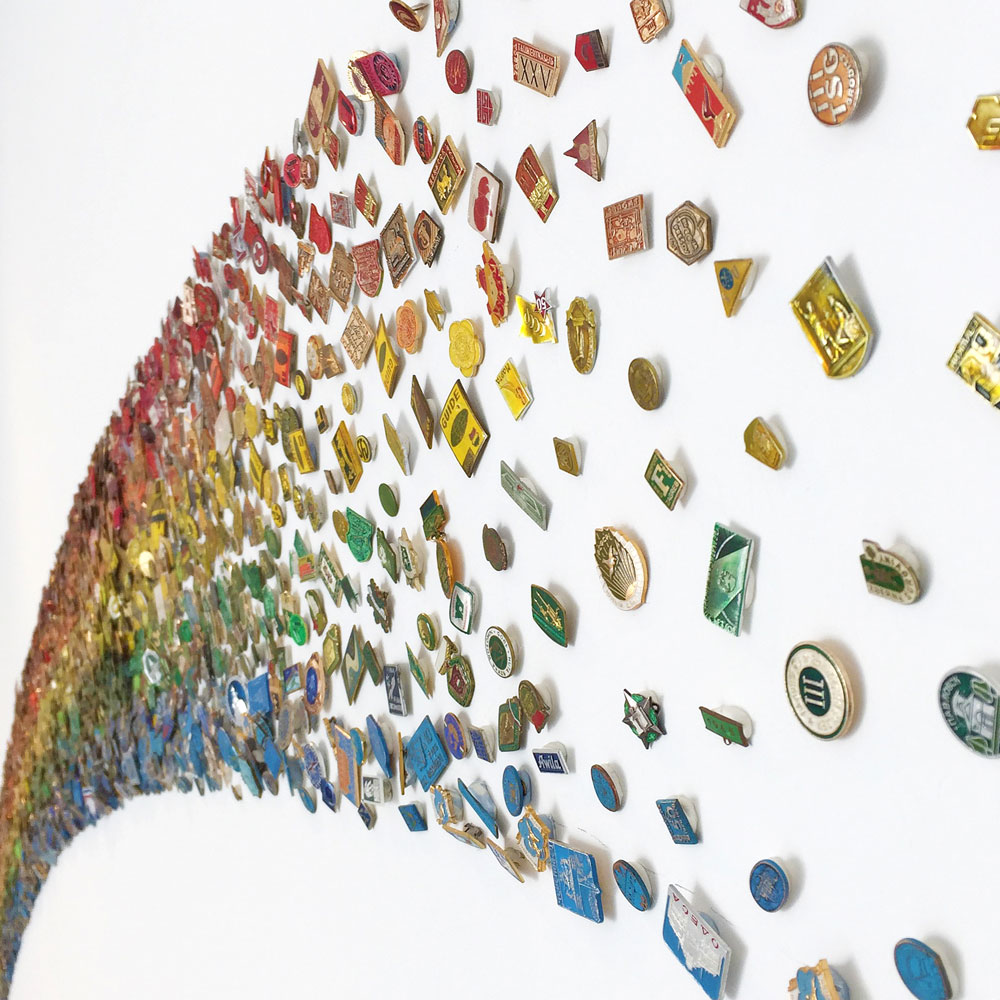 The pavilion’s entrance is filled with a reproduction neon sign that used to be illuminated on the roof of the tallest building in Soviet Dunaújváros. During the Cold War that sign was meant to herald a global utopia. That may have failed but Várnai is giving it another go. This time, the pooled light of the entrance gives it its own illumination.

I also really liked the Rainbow piece, made from eight thousand Soviet era pin-badges, stuck into the wall.

Other pavilions, worthy of mention, include:

Cinema Olanda by Wendelien van Oldenborgh, is an ambitious 15-minute film, with no cuts, that follows different generations through the landscape of Netherlands architecture.

It is married with two 17-minute films, Prologue: Squat/Anti-Squat, that relate the stories of different generations involved in the squatting movements of Aldo van Eyck’s Tripolis building in Amsterdam.

Full marks to Finland for the wackiest pavilion. The Aalto Natives, a collaboration between artists Nathaniel Mellors and Erkka Nissinen is absolutely bonkers.

A talking egg, a man in a dressing gown with a box on his head, several muppet-style characters (one who continually bashes his penis with a hammer), and a puppet character with a talking bum were all featured in the 5 minutes I stayed in the room.

Lyrics from the song, featured in the pavilion, and the video above, include: “Cheese is eaten, herrings pickled, the occasional mass-murder, statistically acceptable, relative to Finland’s culture…  rubbish, that’s not music, you box-headed cu…”

The Dane’s Kirstine Roepstorff presented the Influenza, Theatre of Glowing Darkness (Influenza is a pun, meaning ‘to influence’ in Italian).

The audience sit facing a black curtain and are plunged into total darkness. There’s then a dialogue between a seed that wants to grow into light and a midwife (so I suppose it was a womb-like experience). She explains that absorbing darkness is a key part of life and asks what we can remember of the time before we saw.

Through the 30 minute ‘show’ there are a few flickering of LEDs and lasers so we don’t get too freaked out by the sensory deprivations. But that’s about it, the curtain comes back and we’re left to find our way out into the blazing sun.

Although the Giardini is the main (and original) location for the national pavilions, there are now many, many more, spread throughout the city, and in the Arsenale. In my next entry, I’ll drop back to see the ones in the Arsenale.

Michael’s introduction, and top tips for first-time visitors, to the Venice Biennale. END_OF_DOCUMENT_TOKEN_TO_BE_REPLACED

Looking at the Venice Biennale national pavilions within the Arsenale site. END_OF_DOCUMENT_TOKEN_TO_BE_REPLACED

Michael ventures beyond the main Venice Biennale sites, in search of activity across the city. END_OF_DOCUMENT_TOKEN_TO_BE_REPLACED