Michael’s introduction, and top tips for first-time visitors, to the Venice Biennale.

The Venice Biennale is overwhelming. I saw so much and such different art that even now, just a day after I got back, I’m struggling to remember what was what (and where and why and how).

I find it useful to write about such things, to use photographs and the ephemera I have collected to construct some kind of narrative. That way it’ll sink deeper in and I’ll have more chance of being able to recall the experience in the future. I’m doing it mostly for myself but I’ll write it as if someone else is reading it. If you’d like to read along, I’d be delighted. 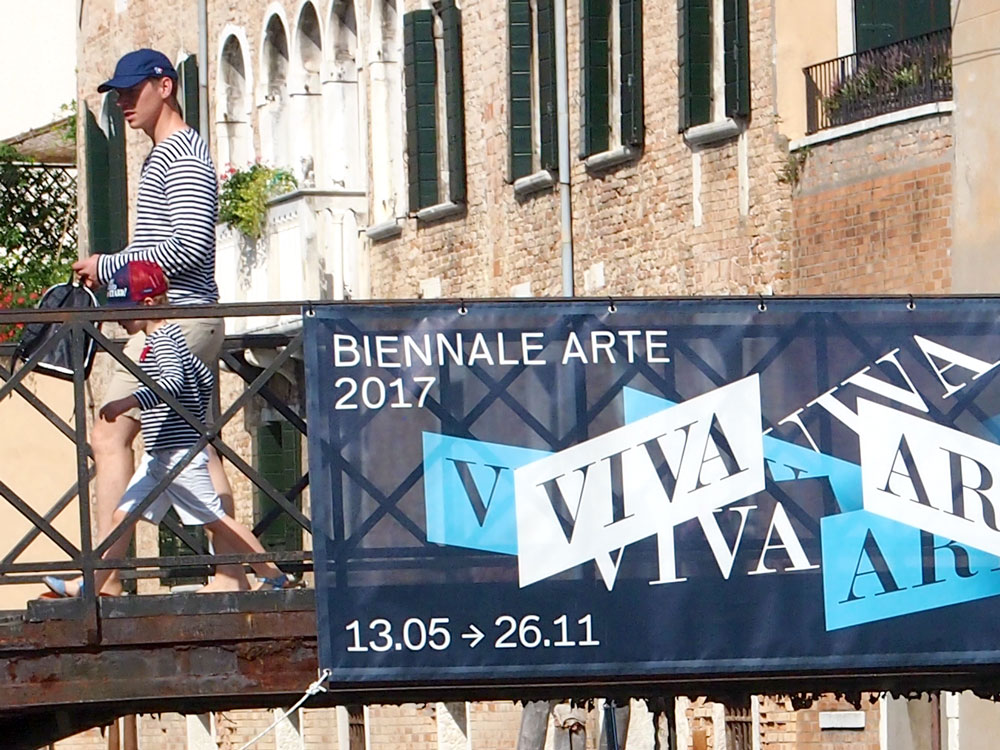 To a first-time visitor, like me, Venice Biennale is confusing. Having been there, got my bearings and spent some time reading around the subject, I feel like I now have a reasonable idea of how the various bits fit together. But it’s not easy.

So here’s my best attempt at a simple overview:

La Biennale di Venezia, Esposizione Internazionale d’Arte is centred around two main locations, close to each other: the Arsenale and the Giardini – you pay to go into these areas (one price, two places). Plus there are lots of associated exhibitions across Venice that are free to enter. Times vary but when I was there, most exhibitions ran from 10am until 6pm.

Note: everything is closed on Mondays so time your trip carefully.

The exhibitions are mostly country-based. 86 Nations were represented this year, each seems to decide how to fill its ‘Pavilion’, either with a range artists or (as with Great Britain for the past few occasions) a single artist as that year’s ambassador. The US bucks the trend and assigns its curation to a commercial gallery (and confusingly seemed to have two pavilions at different locations). 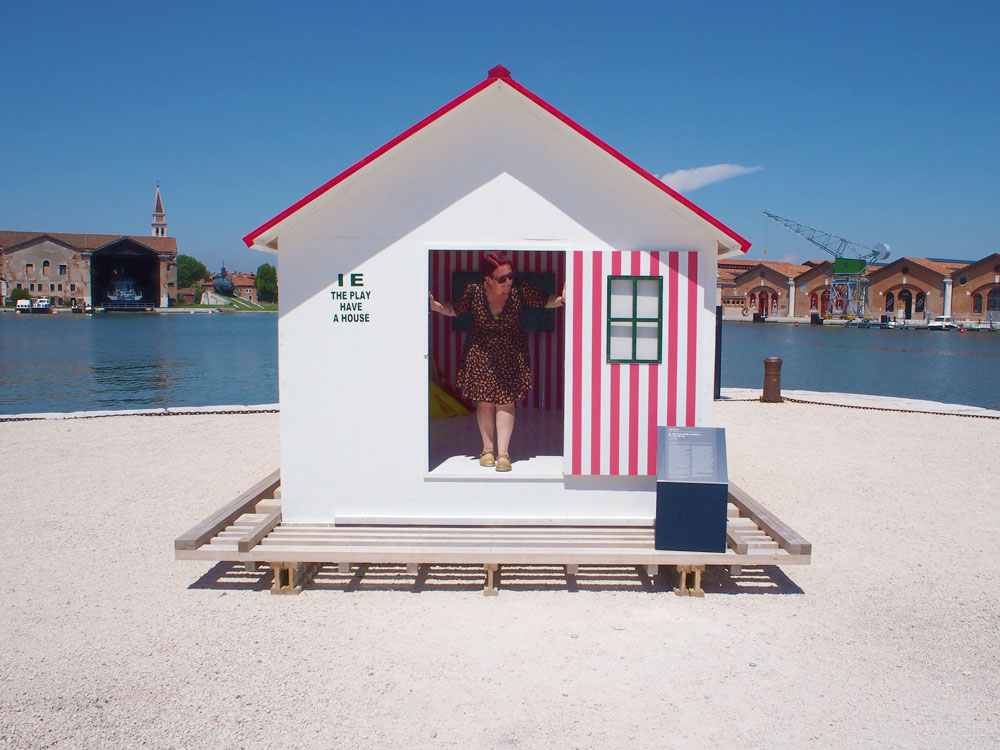 A replica of the floating house created by the artists’ collective, The Play. which in the 1970s they ‘sailed’ from Mount Kasagi towards Osaka Bay. Currently sited in the grounds of the Arsenale,

As well as all the national pavilions, there are two areas ‘programmed’ by the Biennale’s curator, Christine Macel. The relatively small (but still huge) Central Pavilion is in the Giardini (amongst the ‘main’ pavilions) and the vast space of Arsenale which is loosely divided into very broad themes (and is surrounded by a few smaller national exhibitions).

There are also themed festivals going on at different points in the year for Theatre, Dance, Architecture, Music and Cinema. My visit didn’t coincide with these. Maybe next time. 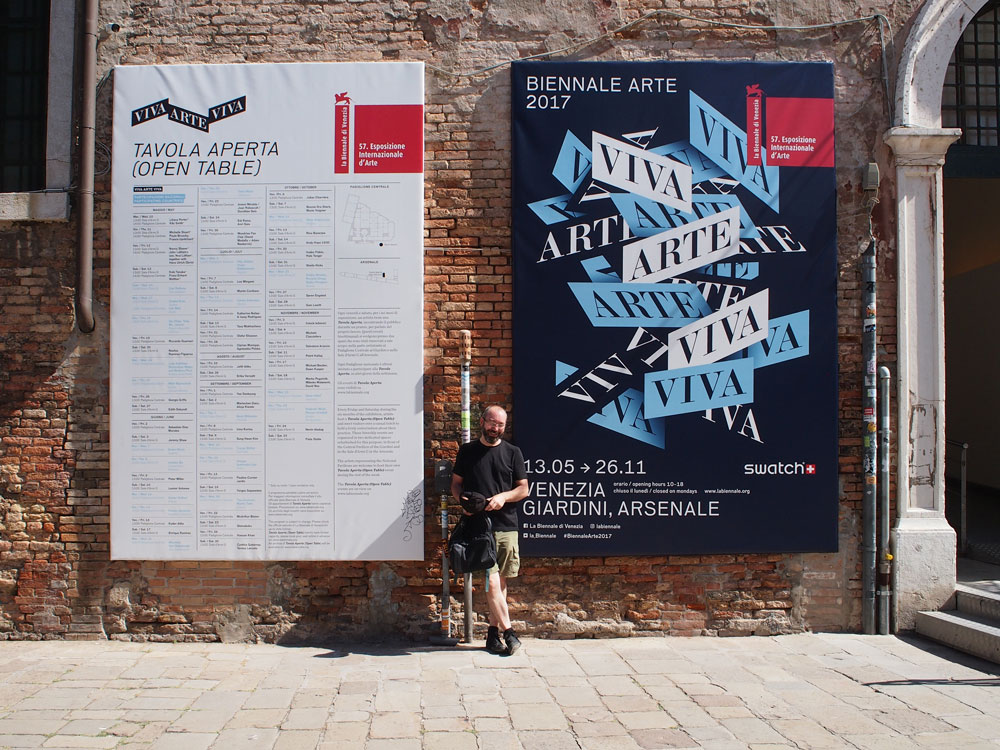 Michael, dwarfed by the timetable of Biennale activity

First conceived in 1893, the Biennale is the pinnacle of the art calendar, with many nations taking the opportunity to gain prestige on the world stage. Although originally conceived to boost commercial sales, modern Biennales have tried to separate the art from commerce, leaving Art Basel to become the world’s biggest art fair.

At the Giardini site, permanent pavilions (like art embassies) have been built by different nations through the Biennale’s history. By 1914, there were six: Belgium, Hungary, Germany, Great Britain, France, and Russia. There are now 30. There’s also a huge dedicated space where the curator (currently Christine Macel) hosts their own thematic programme. 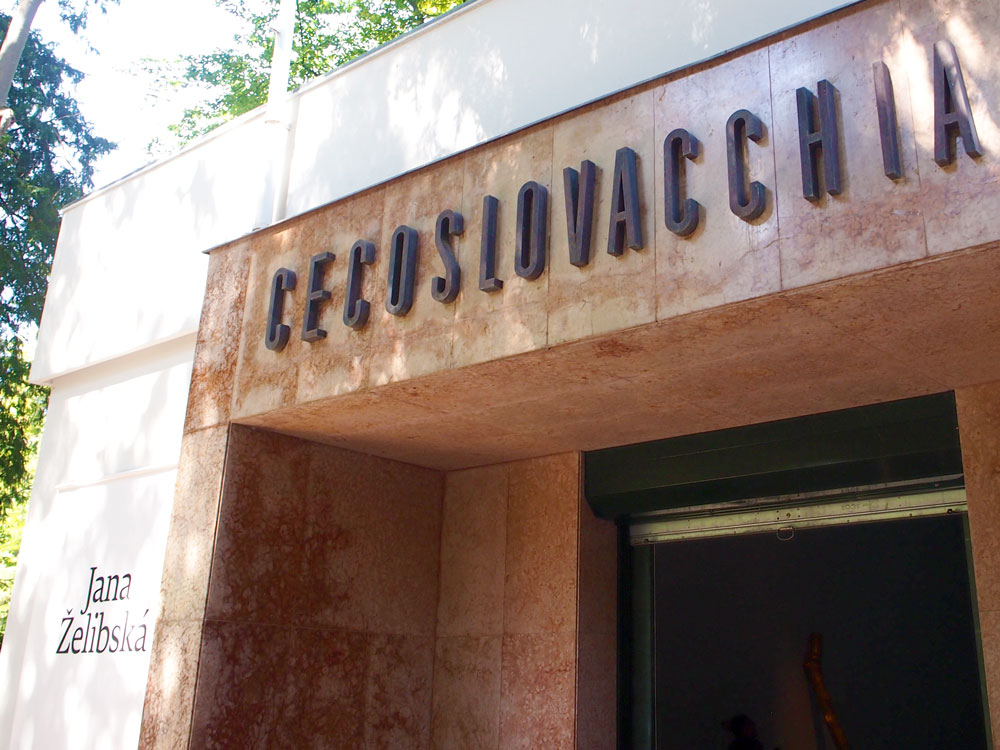 Some pavilions have been around so long that they bear the name of countries that no longer exist.

The Arsenale site is a magnificently-proportioned former munitions factory and dockyard for what was once a world-dominating navy. In the vast buildings (and surrounding landscape), countries can request a temporary exhibition space; they pay by the square metre. Originally (in the 1980s) the Arsenale was a kind of fringe but now it’s part of the main event. 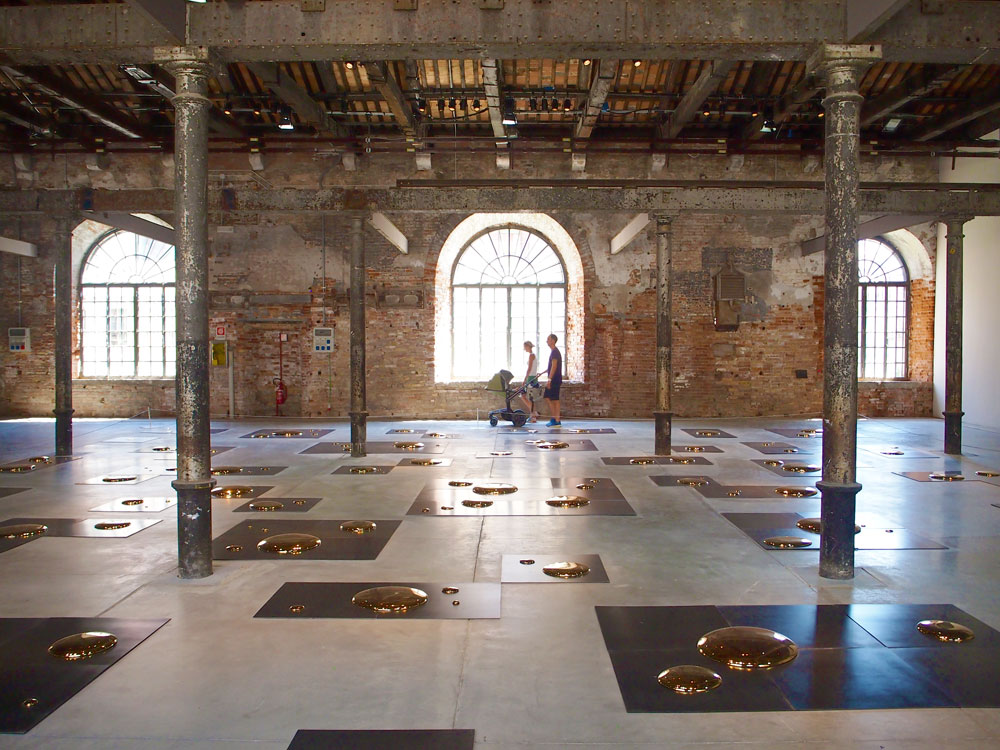 The vast spaces of the Arsenale are filled by artists. In this photo, Chinese artist Liu Jianhua’s ‘Square’, 2014

Throughout the city, there are dozens (36 I think) of other ‘pavilions’ for other participating countries (Partecipazioni Nazionali) in what I’m assuming must be temporarily converted buildings. And 23 official Eventi Collaterali scattered above shops, in museums and galleries.  These are all free to enter, even without a ticket.

And, of course, there are many, many public galleries, museums and private art galleries in Venice. I went to a few but I’ve not included them here. 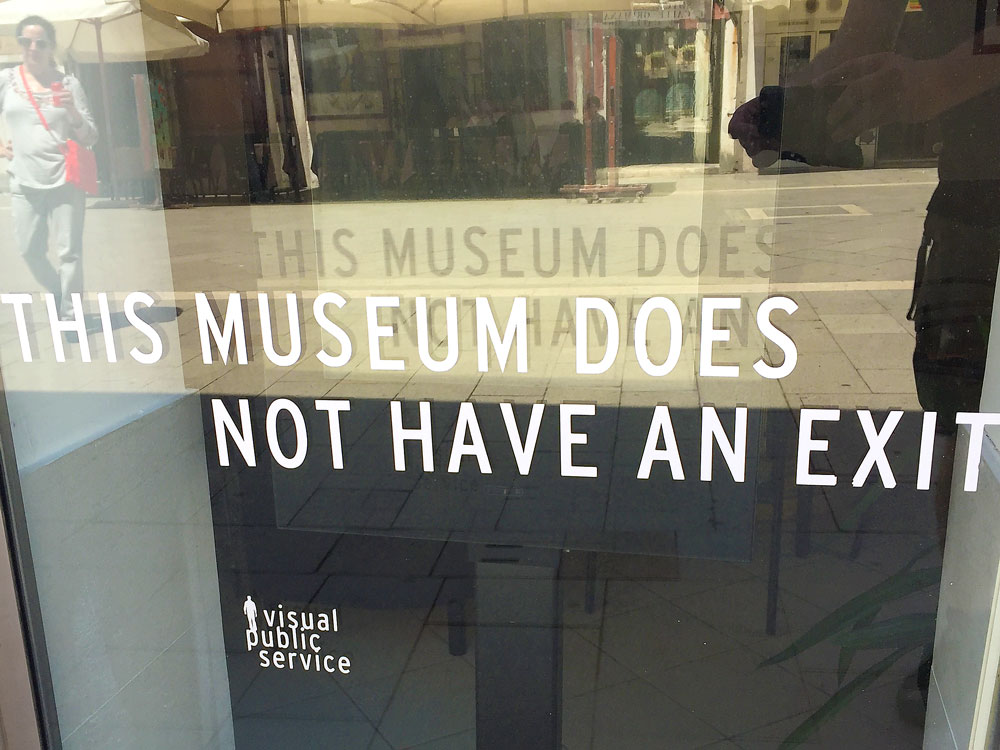 An unofficial intervention by the collective, Visual Public Service, on the window of an estate agent

I also spotted a few guerrilla activities. Some may have been officially sanctioned but I have no real idea. The ones I noticed were in English; perhaps there were thousands of other ‘happenings’ in other languages.

Here are my 5 top-tips for visiting Venice Biennale.

You won’t get to see it all unless you have at least a week. Even then, some exhibits are ephemeral or performance based. So arrive, orientate yourself at the main sites, pace yourself and wear comfortable shoes. 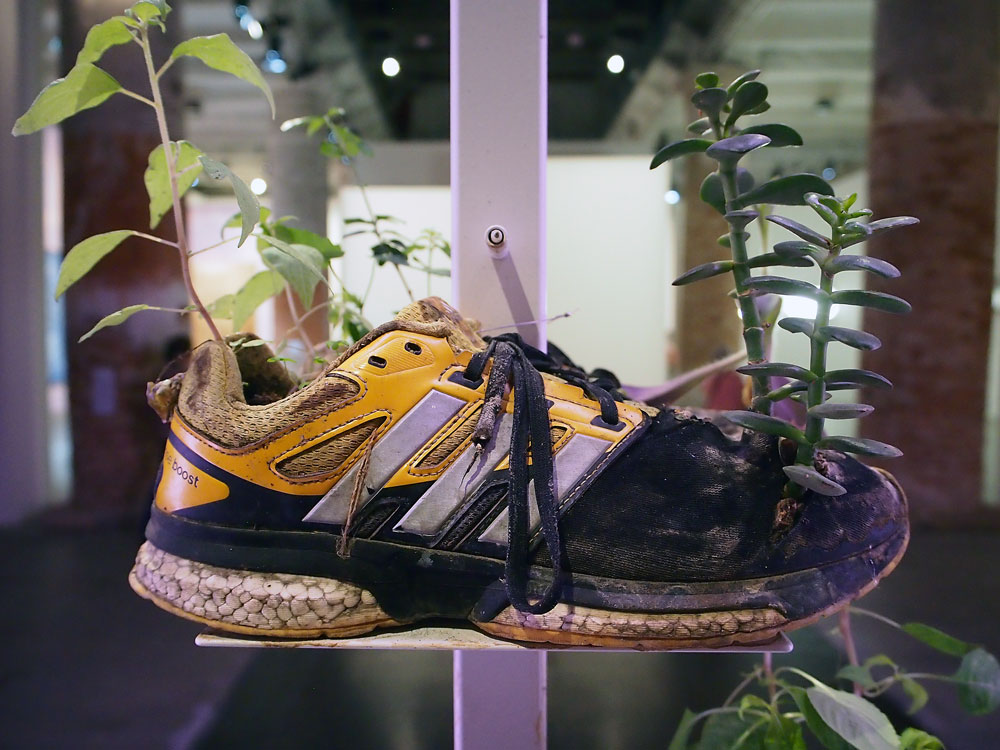 They sell a 48hr entry ticket. And they mean 48hrs from your first entry to your last. So, if you first go in at 10:30am, you can come and go that day and the next. And, as long as you enter before 10:30am on the third day you can stay in that location all day too. But entry is only €30 which is about the price of two ice-creams by the Grand Canal, so maybe don’t be stingy.

3. It gets really hot in the summer

When the guide books and sites tell you not to book in July and August because it is oppressively hot, believe them. If you can’t stand the heat stay out of the Cucina. 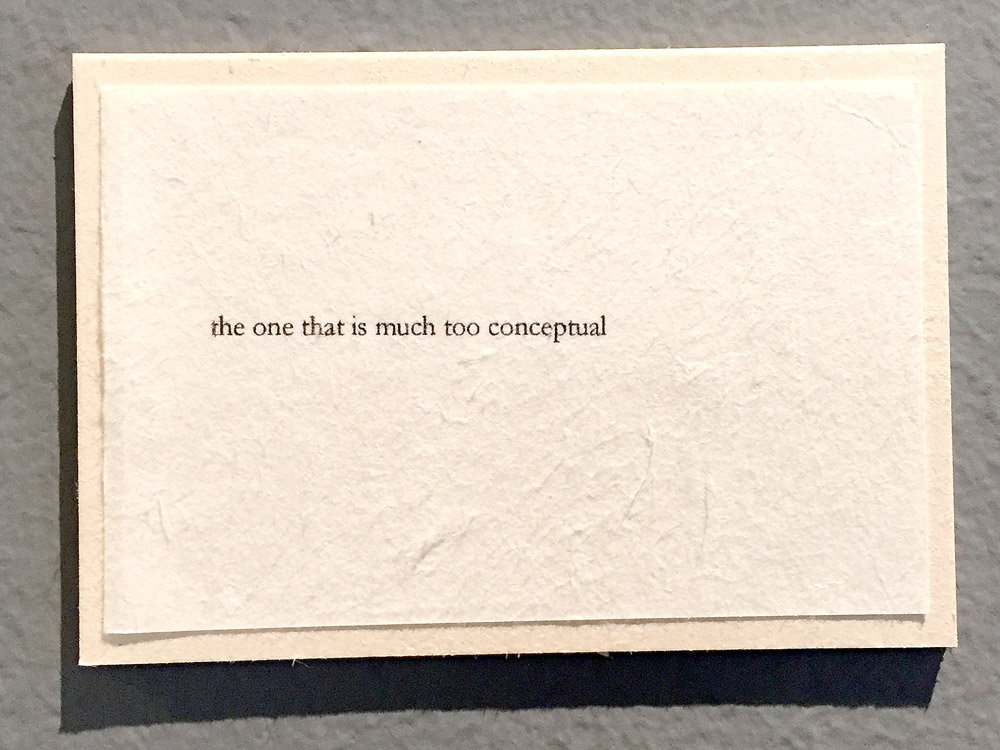 One of the cards from Franck Leibovici’s ‘Conversation Circle’

4. Be patient with the art-speak

The Biennale really is for everyone. It’s fun, often irreverent, accessible, reasonably priced, thought-provoking and engaging on many levels. But lots of the exhibitors are stuck in an art-speak bubble. Many of the works have very earnest explanations, often conveyed via A4 ‘press releases’. It’s a communication that makes sense within the bubble but it feels quite alien in a ‘public-facing’ context. 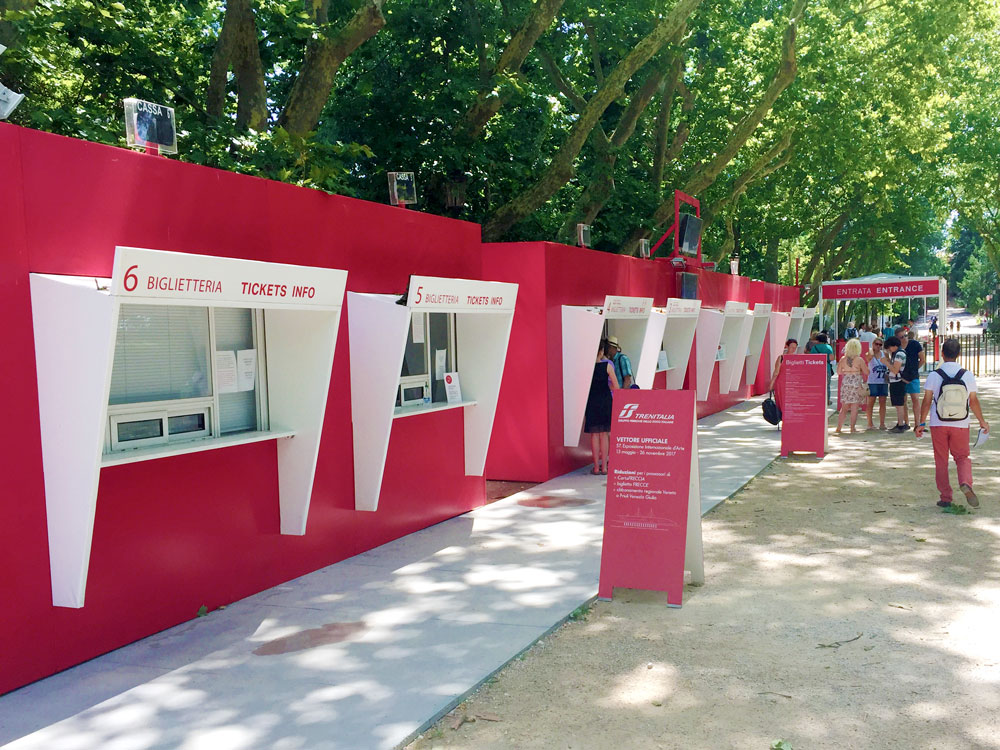 Ticket booths at the Giardini

The whole event is exceptionally well organised but their website does little to reflect that. It is not a fun way to spend your time, it’s not responsive for mobile and you’ll be hard-pushed to get a sense of the experience from it. And there really doesn’t seem to be any need to book in advance because there are loads of ticket booths when you get there. Of course, if they want to get in touch, we could solve that problem for them, by 2019.

That’s enough introduction, I’m sure. But before I wrap up, a quick word about photography.

Everyone was very relaxed about people taking (non-commercial) photos. That wasn’t great for my collection of No Photography signs but it did mean I brought back a lot of visual memories.

In my next entry, I’ll look at this year’s curated presentations: nine ‘pavilions’ under the umbrella of Viva Arte Viva. 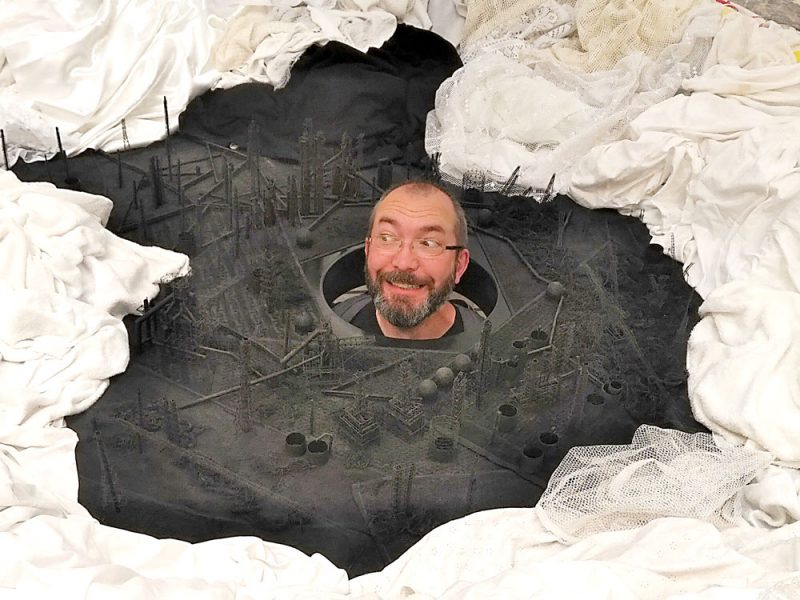 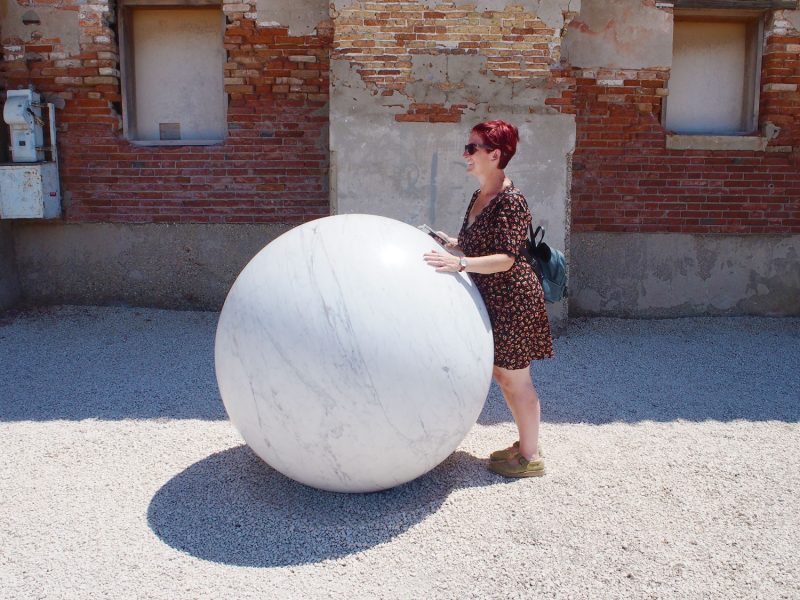 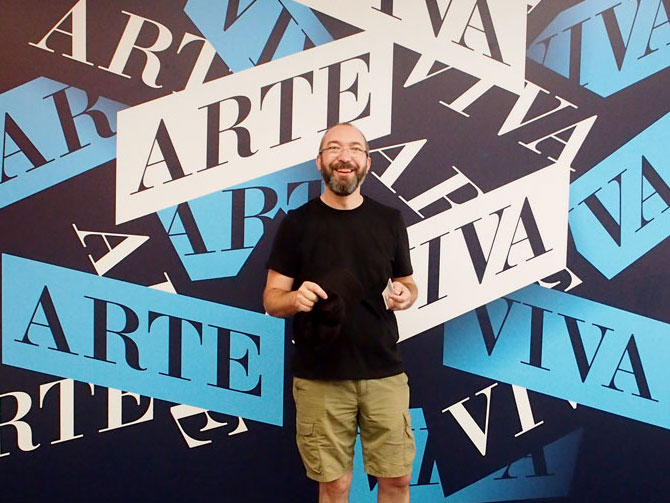 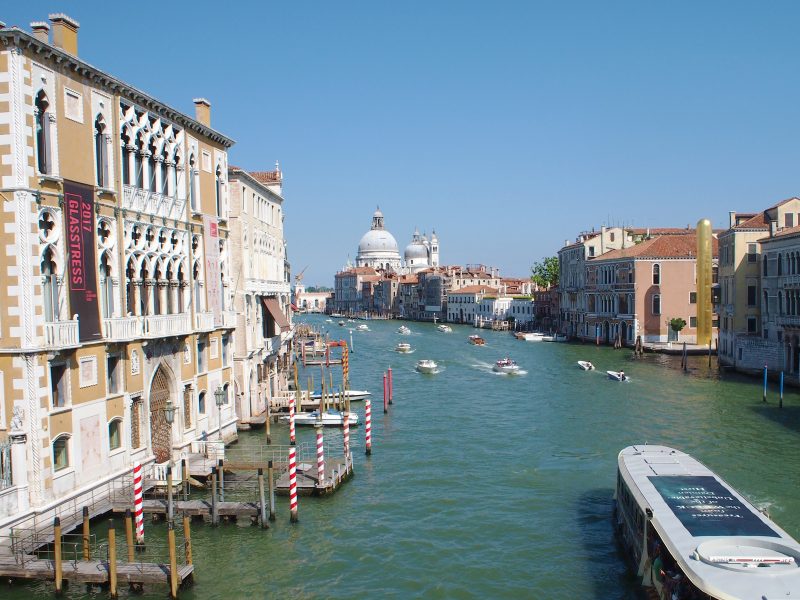 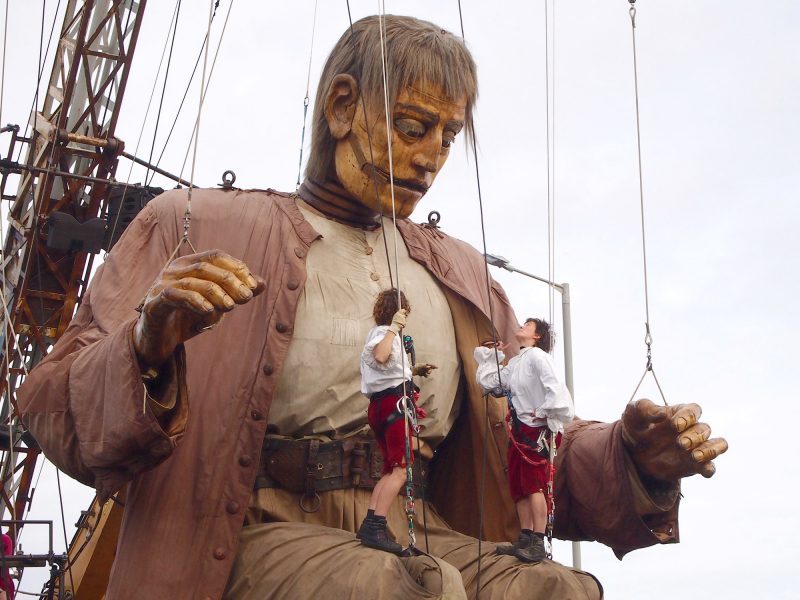 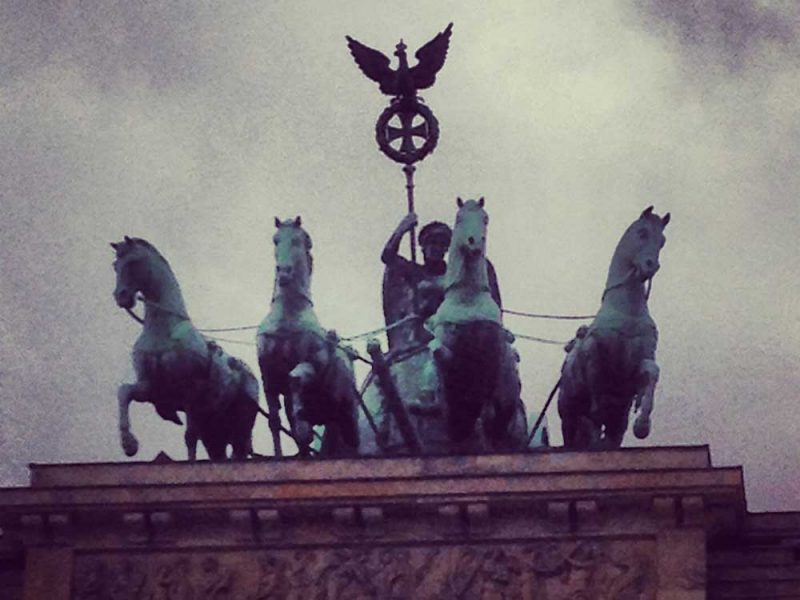