Louise Sloper has had an amazing career in design and advertising.

She’s worked with some of the most exciting, high-profile brands across a range of industries. Louise is Chairwoman of the Typographic Circle and she’s recently founded her own agency, Here.We.Go. with a focus on ethical clients and social and environmental change.

We first met Louise in 1999 when she interned at Cog. We’ve been cheering her on ever since.

It was great to have Louise along to lead one of our breakfast briefings on Zoom. Louise spoke to us about her eclectic career and about her experiences as a woman working in the advertising and design industries. 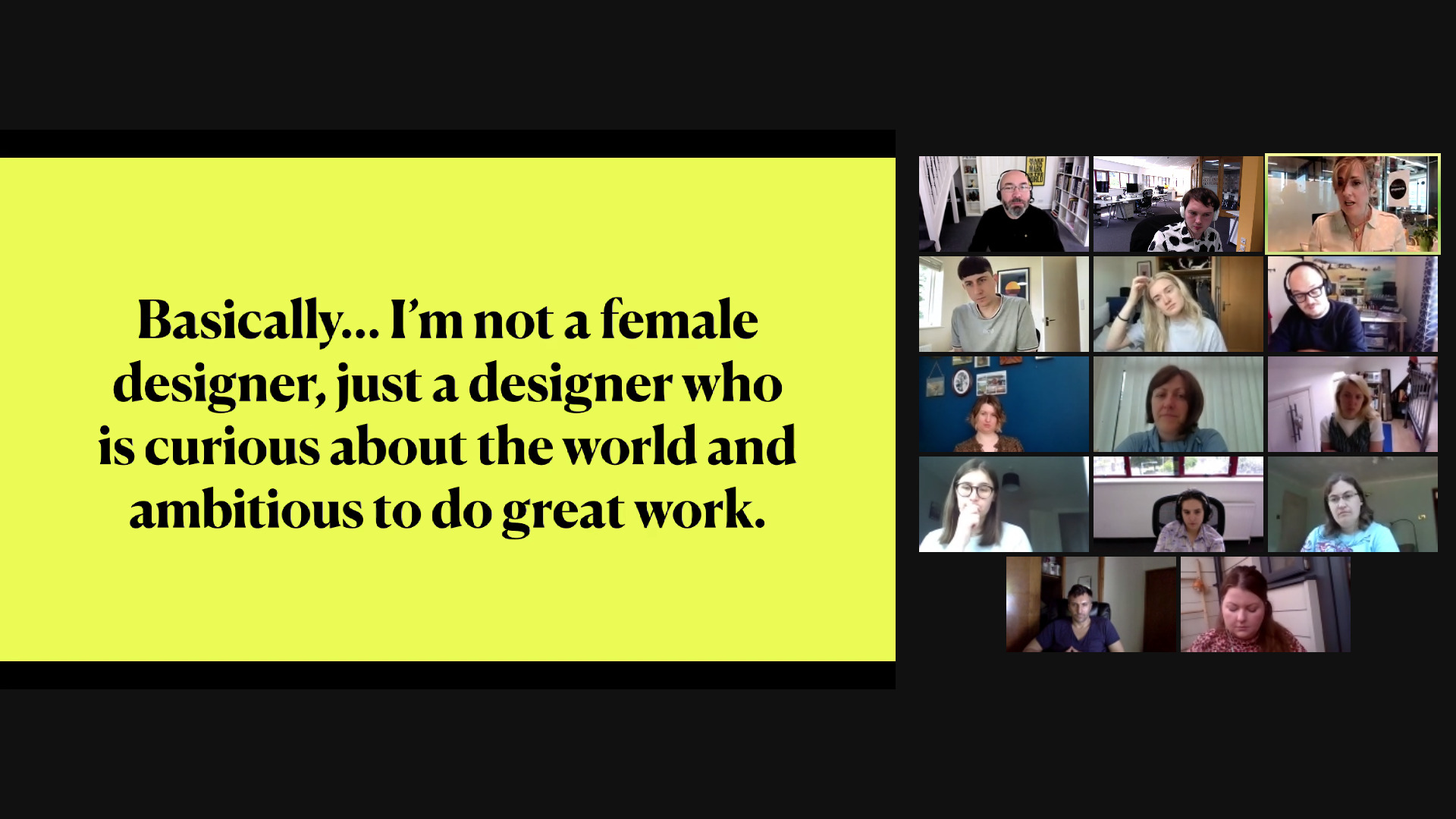 Nevertheless, throughout her career Louise has often been one of the only women working in the creative department. And she’s encountered numerous barriers that her male peers generally do not have to contend with.

Louise shared some of the difficult questions she’s asked herself at stages in her career. Questions such as:

Louise found that sometimes these behaviours are deliberate and sometimes they are engrained in societal expectations or unconscious bias.

Two new creative grads recently carried out an eye-opening experiment. Sick of sexism in the advertising industry, Jess and Nina designing and carried out a project they called The Gender Agenda.

They noticed a marked difference in the responses that ‘Harry and Liam’ got compared to ‘Emma and Hannah’. The ‘male’ team received more crits than the female pair, and more offers of continued contact.

When it comes to gender equality in the advertising and design industries, the statistics make for grim reading. 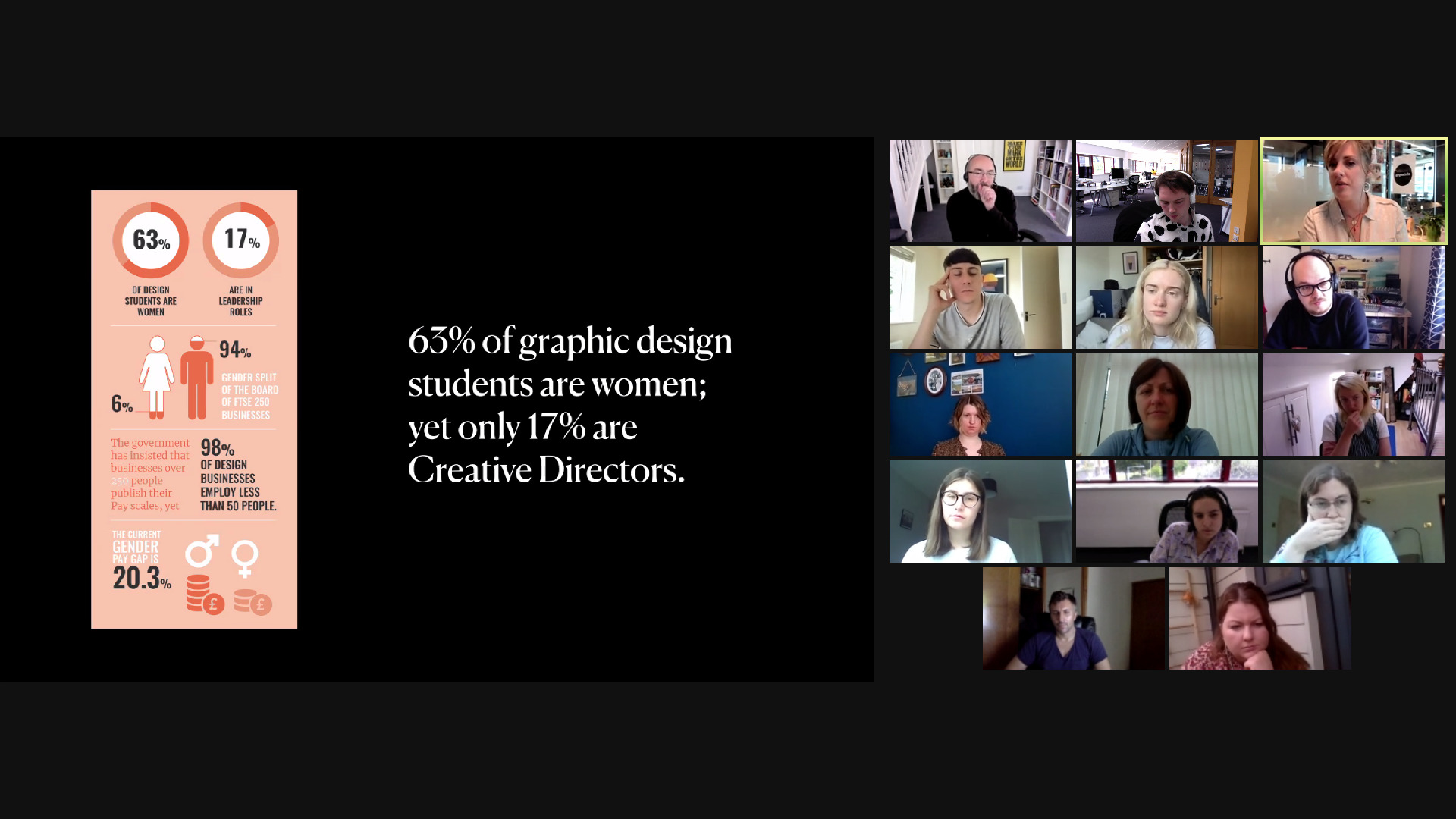 Louise told us that 63% of graphic design students are women, yet only 17% of Creative Directors are women, with even fewer as agency principals. And stats across the broader diversity spectrum only get worse, with just 12% of leadership roles being racially diverse.

According to The Drum, only 8 of the 100 most award winning chief creative officers are women.

One of the great ironies of the lack of diversity in creative and advertising roles, is that diverse teams are good for business.

Campaigns are not going to be as effective as they could be if they’re produced by a group of men for predominantly female audience.

Louise illustrated this brilliantly by placing two Mothercare ads side by side. The ad from 2019, produced by a more diverse creative team, has a far greater impact and doesn’t reinforce any gender stereotypes. 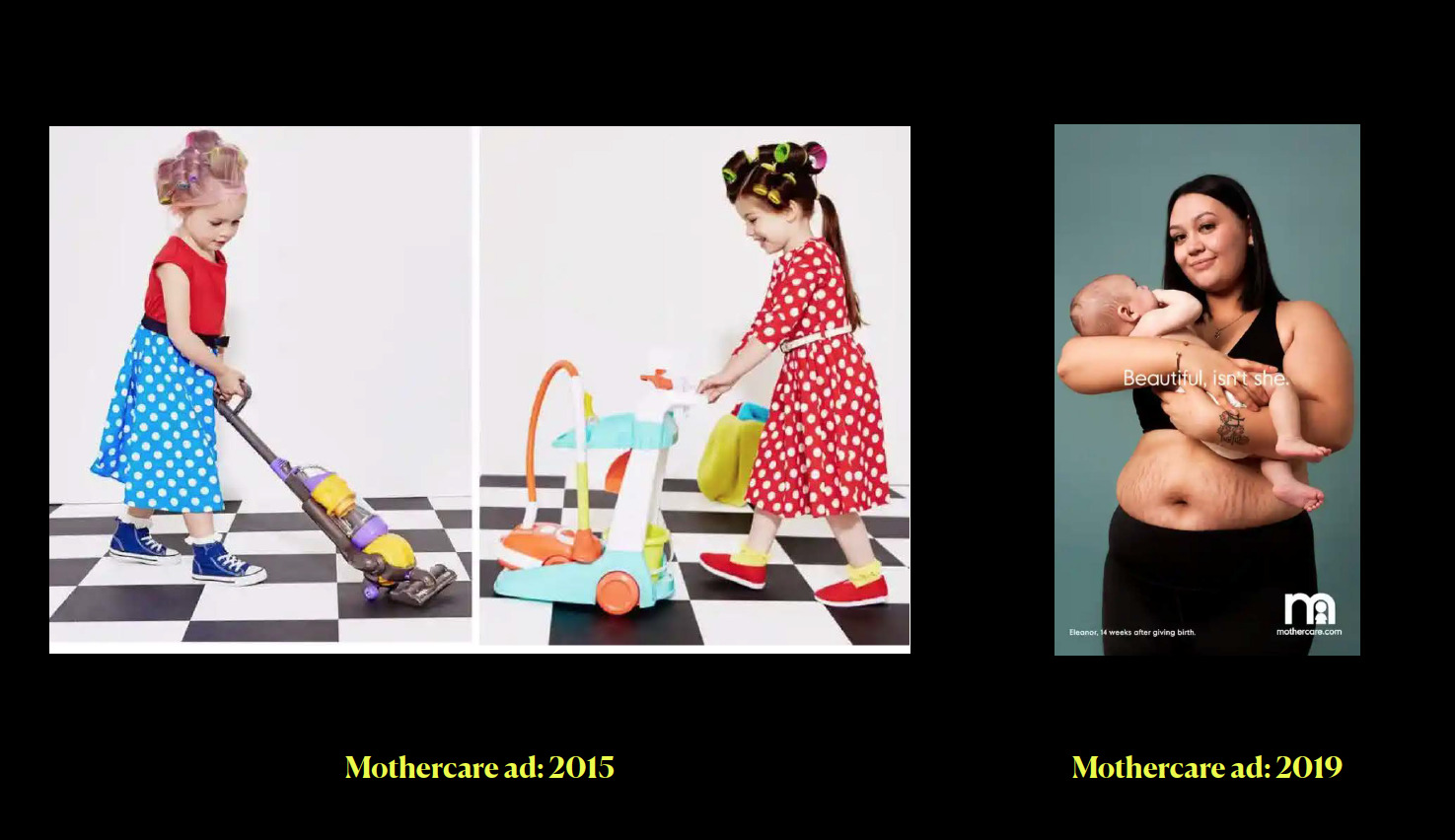 A culture of long hours

Louise explained that often the long hours and ‘at desk’ culture mean it’s often difficult for mothers to continue in the profession.

She shared the example of a former creative who returned from having her son, only to find that there wasn’t work for her to do anymore as it had been mainly handed over to a younger male colleague.

Louise shared some great organisations and campaigns who are working to introduce more flexible working cultures:

Women in Advertising and Communications, Leadership (WACL) have run a #FlexibleFirst campaign, calling for organisations to embrace flexible working in order to close the gender pay gap.

Bloom is a professional network for women in communications, championing women in all stages of their careers. Louise is a particular fan of their podcast Naked Truths, which gets right to the heart of difficult conversations.

The gender pay gap is still a real problem. And laws which require companies to disclose salaries only apply to larger firms. Not much good in an industry full of micro-businesses with fewer than 50 people.

Louise explained that on average women still only earn 80p on the pound compared to men.

She highlighted Creative Equals as a leader on this issue, a consultancy which helps to grow and improve workplace cultures.

Louise is a huge advocate of mentorship, and a prolific mentor herself. Mentorships are truly valuable, but only 25% of women in the industry have had a female line manager. We are all responsible for levelling-up and sharing our knowledge and skillsets with one another, regardless of sex or seniority. Some of Louise’s own mentors have been have been both male and female alike, and have produced valuable insight into leadership and craft skills.

Louise told us about her favourite mentorship organisations that are addressing that imbalance:

She Says is an award-winning organisation that runs free mentorship and events for women in the creative industry. Louise recommended their Women with Epic Ideas (WEI) app in particular.

Kerning the Gap is an amazing equality network for the design industry with lots of fantastic mentoring opportunities. We had a great breakfast briefing with its founder Nat Maher in August last year.

Creative Mentor Network is another fantastic organisation working to make the creative world of work more inclusive through mentoring opportunities.

And Create Not Hate, set up by Trevor Robinson OBE in 2007 works to help young people who are underrepresented in the creative industry unlock their potential, and to address the social issues they live with every day.

Louise recommended some great networking and training organisations too, including:

Towards the end of the breakfast briefing Louise talked about sexual harassment.

She told us that opinions vary as to how widespread it is in the industry but it is there, and often it feels difficult to speak up. A survey of 3,500 advertising employees carried out by the #TimeTo initiative found that 34% of women questioned had been harassed.

Half of those who reported their harassment were dissatisfied with the outcome and 83% of those who had been harassed did not report it all because they didn’t trust the reporting system and were afraid of damaging their careers.

Louise told us about two campaigns that are setting out to address these distressing findings:

NABS have a confidential helpline and email address which can be used to report sexual harassment and seek advice.

Louise ended her session by sharing some of the tips that have helped her throughout her career: 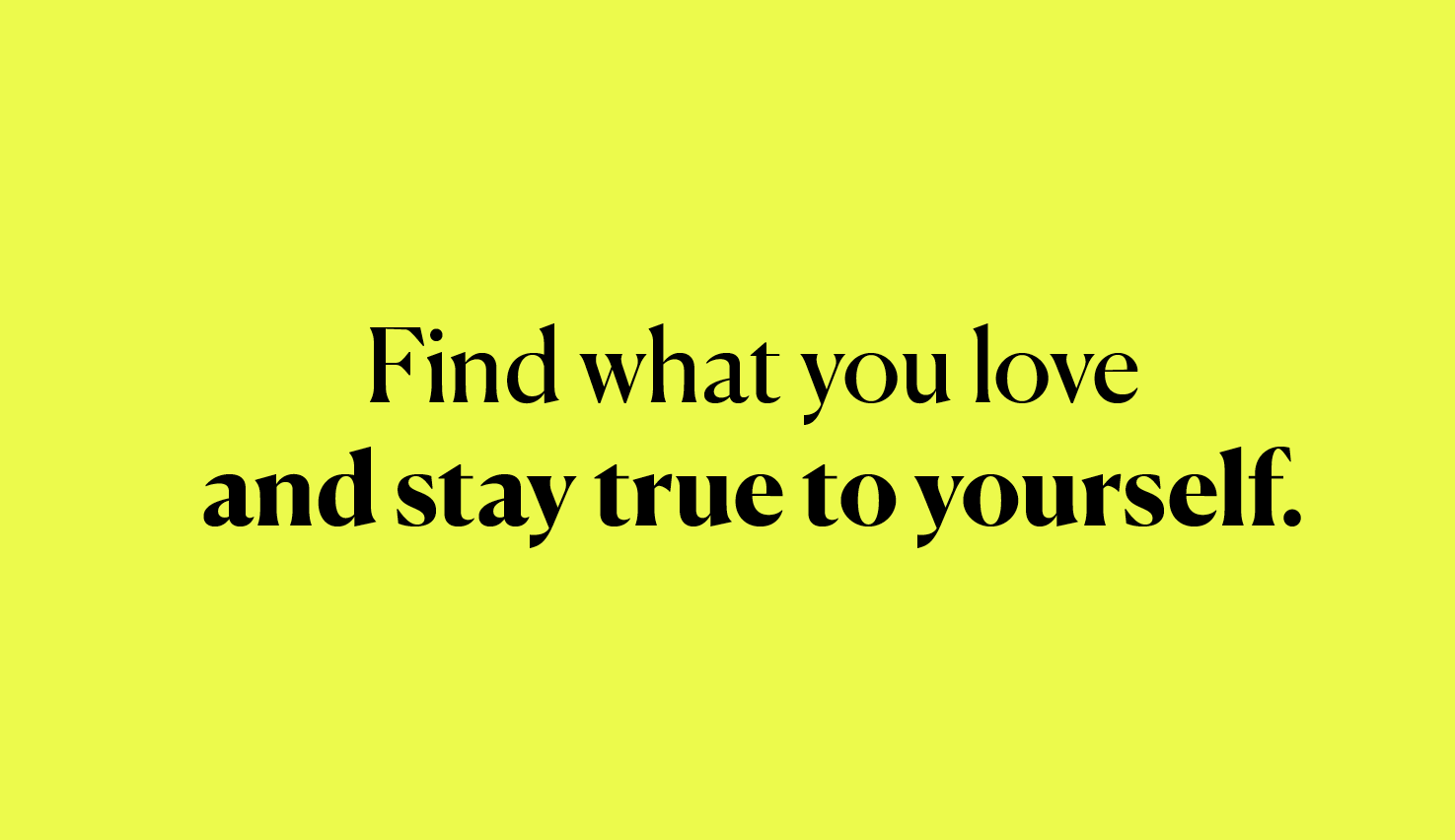 We’re very grateful to Louise for giving up her time to talk to us about such an important topic. As she said at the end of the session: this is only the tip of the iceberg when it comes to addressing equality and diversity in the creative industries and beyond. We all need to work together to open up our industry to differences in ethnicity, race, geographic/socio-economic issues, sexuality and gender, disability, so that we can truly represent the audiences we create for.

The conversations are starting but we need to keep them going.

If you would like to lead one of our breakfast briefings, or join us on Zoom as a guest to hear what our speaker has to say, do get in touch.

We’ve been joined by some fantastic guests for our Thursday morning breakfast briefings. Ed takes a… END_OF_DOCUMENT_TOKEN_TO_BE_REPLACED

We’ve been separated from our studio for three months; Ed looks back at our lives in… END_OF_DOCUMENT_TOKEN_TO_BE_REPLACED

8 things we’ve learnt during the pandemic

We’ve been in lockdown since mid-March. Ed guides us through our top eight takeaways from the… END_OF_DOCUMENT_TOKEN_TO_BE_REPLACED