To say that my family are fans of Damon Albarn’s cartoon band Gorillaz would be a massive understatement. My sons embraced the transmedia virtual band from a very early age.

They get swept up in the backstories along with the music. To them, Gorillaz are a kind of artwork (or a living graphic novel) as much as a band. And they’re not alone. With each wave of activity, the plots, subplots, rumours and remixed reality get more complex.

My eldest son even wrote his degree dissertation about them, part of which included this short video essay…

After a long silence, 2017 began with the rumour-mill rumbling back to life. Damon and the band’s co-creator, illustrator Jamie Hewlett, had started working together again. Apparently they’d fallen out after the band’s Plastic Beach album and hadn’t reconnected until either a drunken text or a drunken green room visit got them talking. Is either story really true? Who knows. It’s all part of the legend.

Fans found ‘leaked’ rough-edit audio, someone discovered that an animator of the live visuals had ‘accidentally’ uploaded test videos on their Vimeo site. They were removed within minutes, but not before fans had captured and posted them. All of the band’s social media profiles changed, their website was reworked, something big was happening.

When the band announced a new album and their own one-day festival, the fan-sites went ballistic. The event sold out in under an hour, but my sons, their mum and I got tickets. 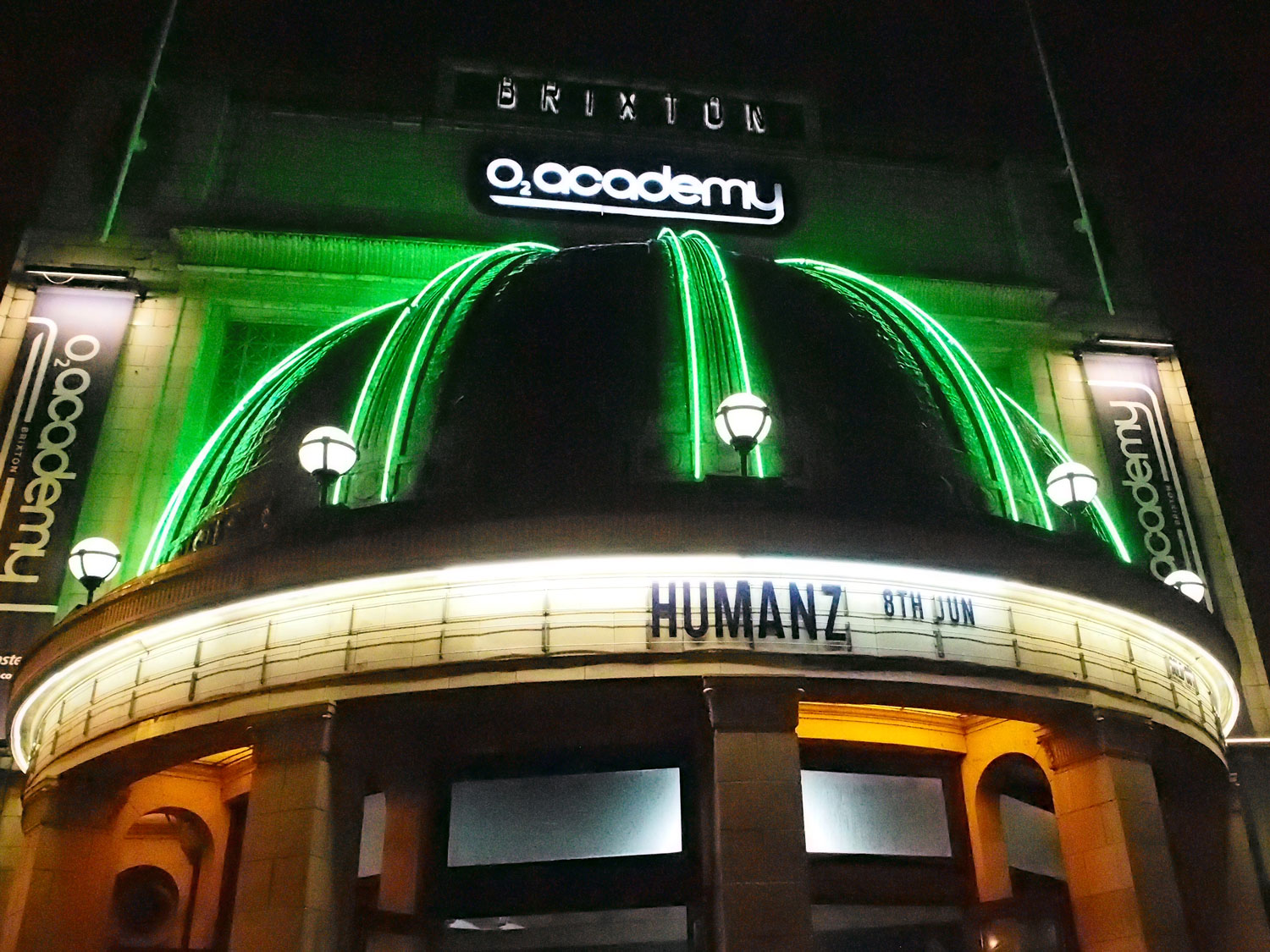 Then some warm-up gigs were announced in the week before. Portsmouth on Sunday. Was that too far? No, our eldest and his mum went to that. Then a ‘secret’ gig at Brixton Academy on Thursday. I joined them both for that one (it was an amazing gig).

And on the Saturday it was all four of us ‘dahn to Margate’ in the blistering sunshine.

I used to go to Dreamland in the 1970s. By then it was long past its glory days as a seaside theme park, but I loved it. Its closure felt like the last nail in the coffin for Margate. But slowly, stutteringly, good people have begun to bring the town back to life. Of course, the siting of the magnificent Turner Contemporary has been the life-spark that has made it possible.

Fronted by Red or Dead’s Wayne Hemingway, the reopening of Dreamland felt a bit too niche and pastiche to me. There has been a lot of money poured into it and many rumours of imminent collapse, but they’ve gradually found their way and the recently extended live music license, allowing a much larger capacity, could be their saving. 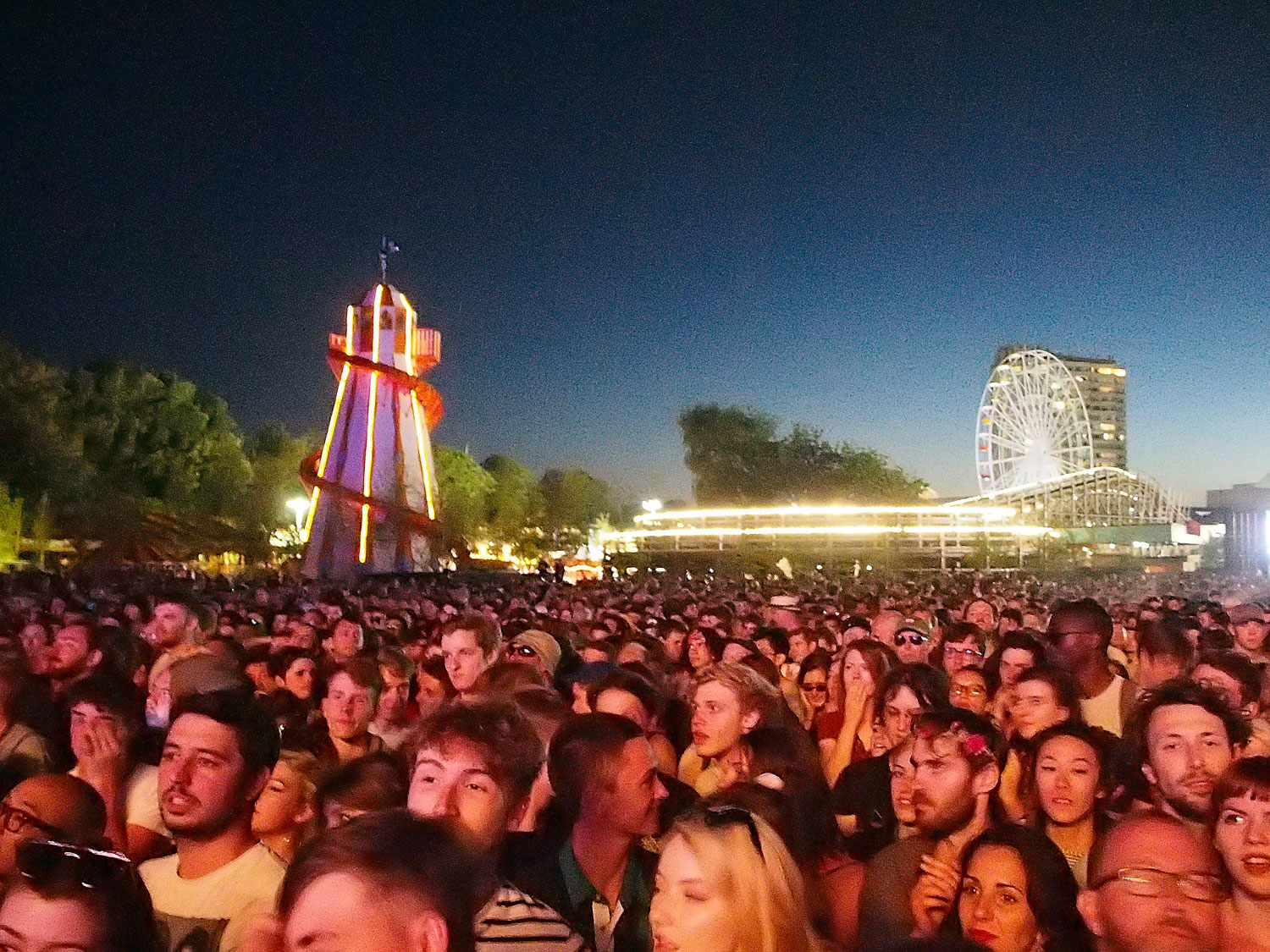 On the day of Demon Dayz, Dreamland looked incredible. Clear blue skies, candy-floss and helter-skelters, there couldn’t be a better setting for a mini-festival. When they get the footage cut into promotional video, there won’t be a promoter in the world who isn’t impressed by this venue (just don’t tell them the last train is at 22:05).

The singer and performance artist Kilo Kish began the day in the indoor venue, The Hall By The Sea, flinging an open briefcase of newspapers into the air and crashing a rotary phone onto the stage. She was followed by Jamaican dancehall star Popcaan, Colombian diva Kali Uchis, London rapper Little Simz, and Detroit rapper Danny Brown. 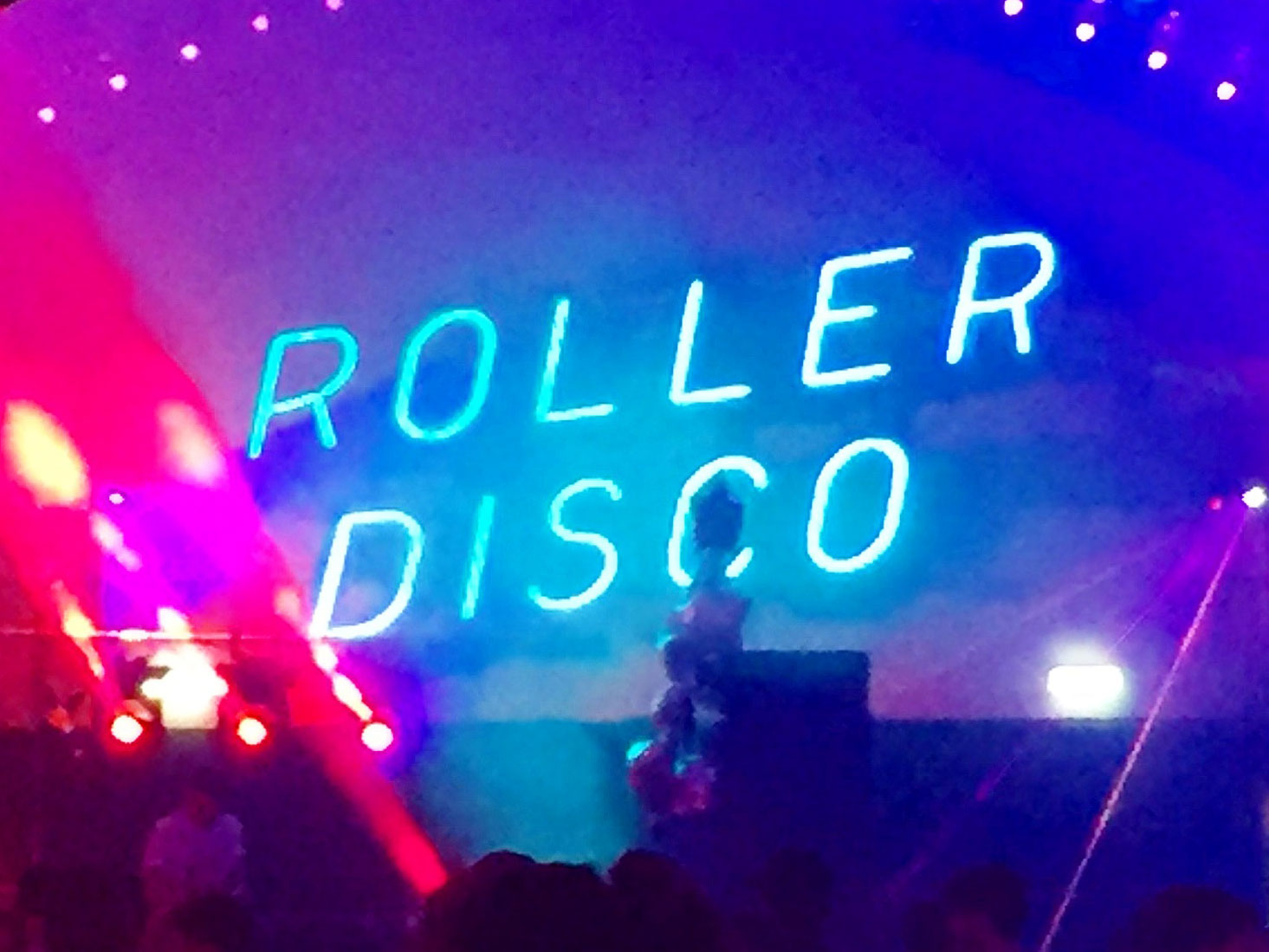 There were DJ sets in the Roller Disco, but I didn’t stay for those as I think my days of rollerskating are well behind me.

On the main stage we watched the Icelandic alt-rock band Fufanu (who haven’t publicly worked with Gorillaz, but seemed to be there because Damon is a fan). 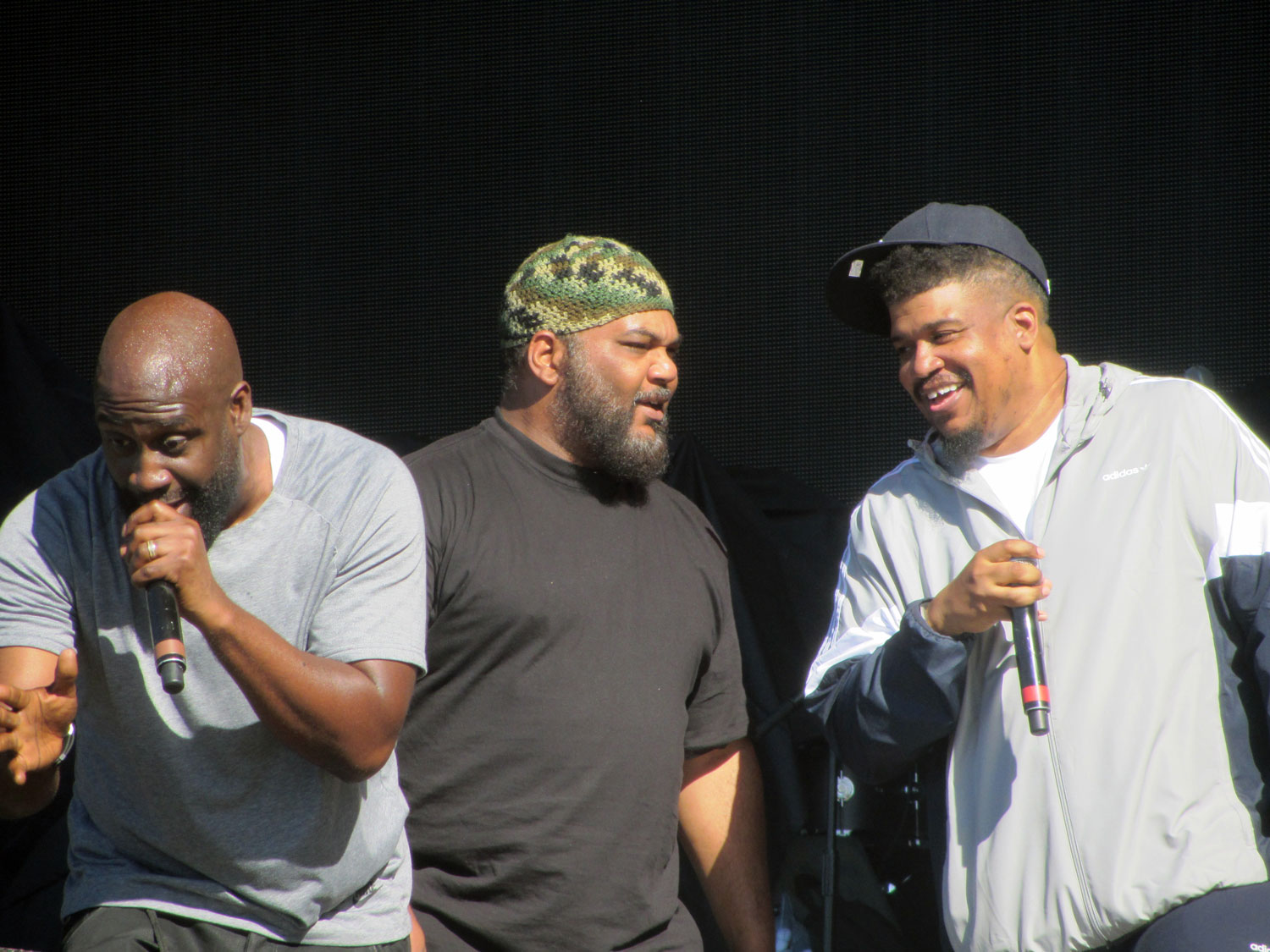 Then the amazing De La Soul brought the party and got us all bouncing.

London grime star Kano was a surprise act, all the more impressive because he brought a full entourage and brass section. T-shirt weather in the manor, my friend felt like the perfect soundtrack to the afternoon. 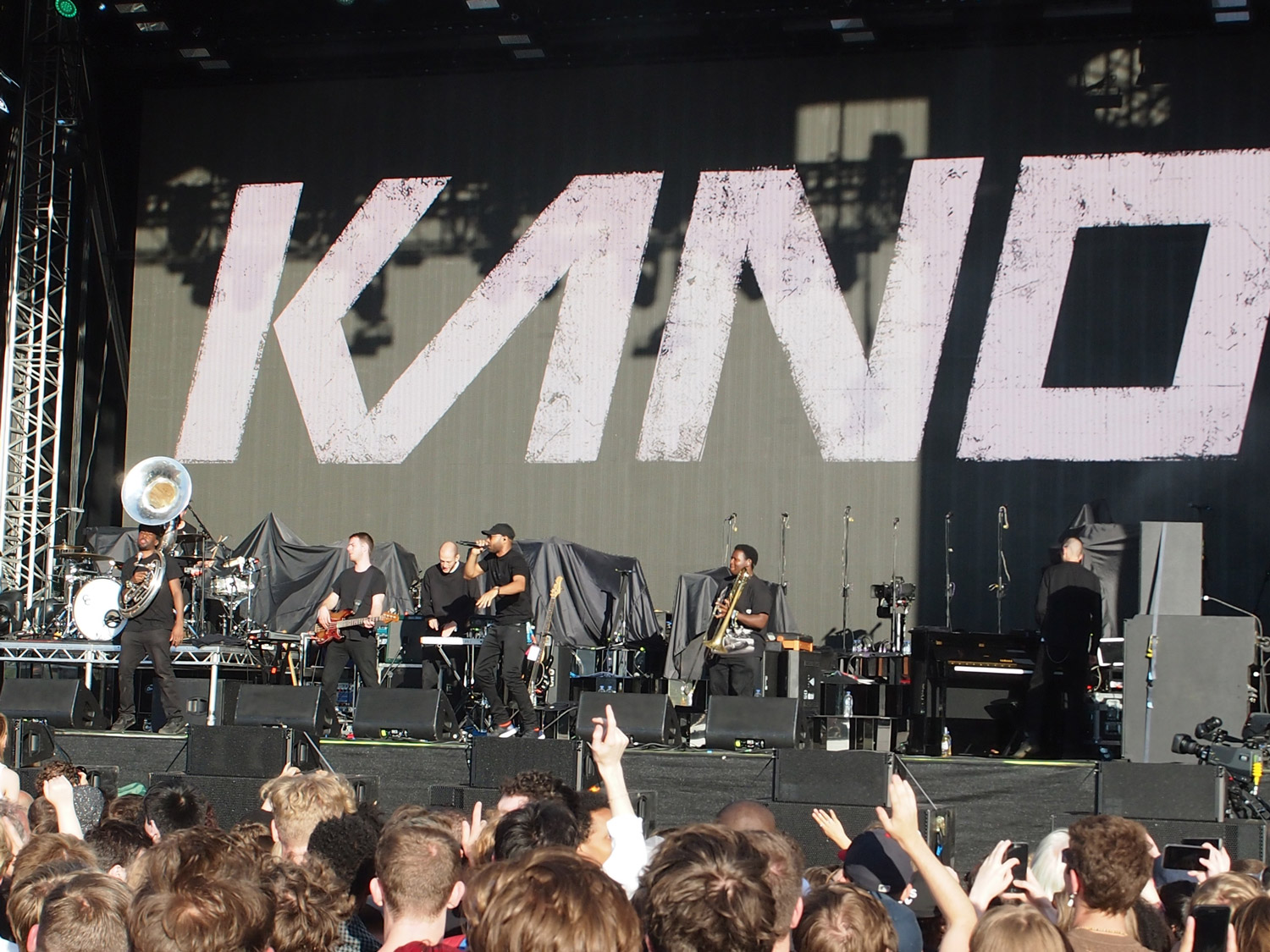 London grime artist Kano with a full stage of musicians

As the crowds began to swell, there were already a few casualties to the sunshine and good times with some young people getting a little tired and emotional.

California’s Vince Staples tried to keep the vibe alive (and I was amazed at how many people were singing along), but his solo act felt a little flat to me. 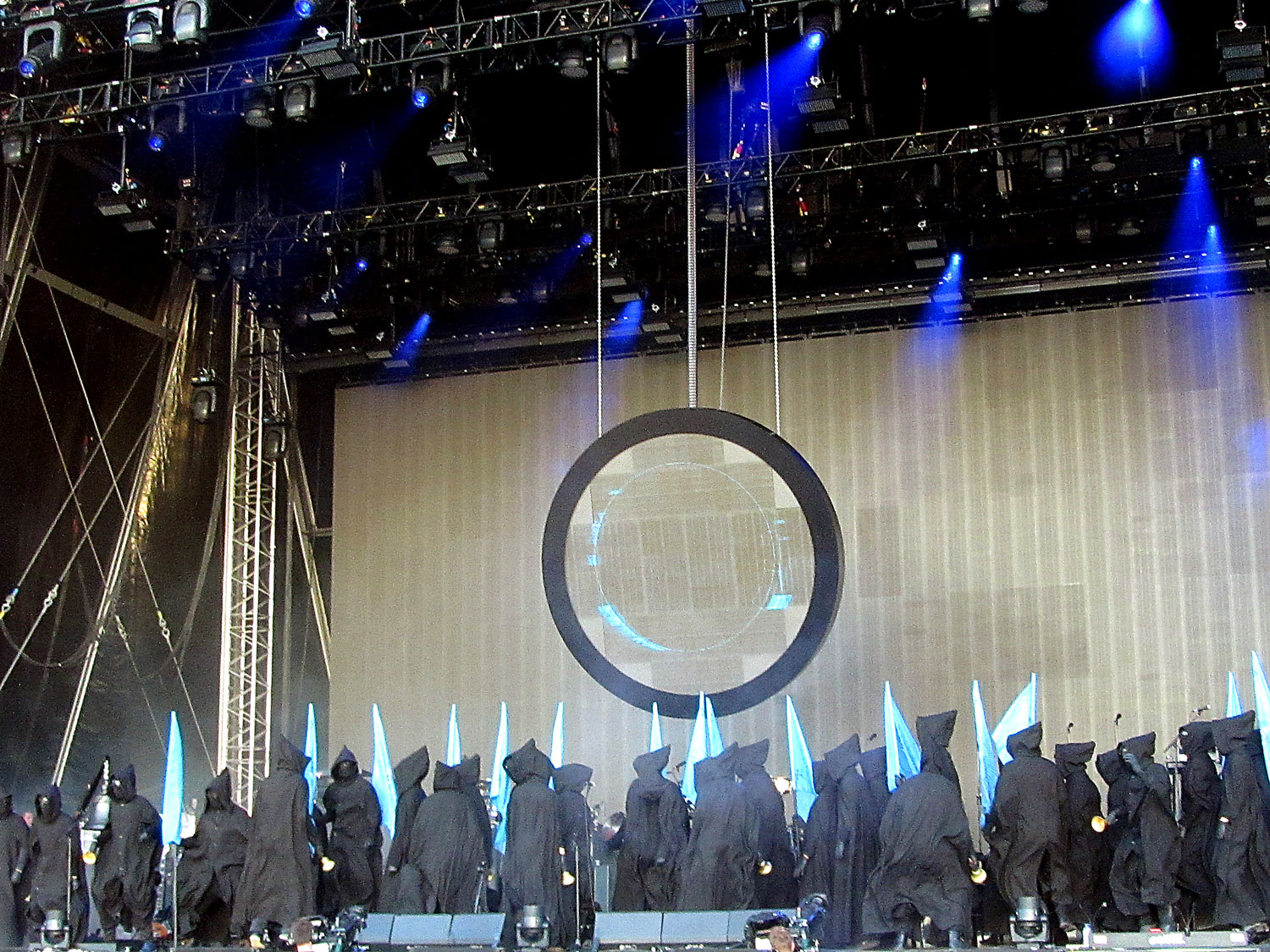 With the shadows getting longer, a parade of black-robed bell-ringers approached the stage. They were the Kool Klown Klan, mentioned in a throwaway lyric at the end of Gorillaz’ Momentz, apparently. There was a slightly awkward moment when they couldn’t get on the stage because a crew-member was still straddling a lowered lighting rig.

With that quickly resolved, the Kool Klown Klan continued their morris-dancer-esque campanology below the giant digital orb-screen with (the currently unreleased) Phoenix On The Hill playing all the time.

Pulling back their hoods and masks, the Klan revealed themselves to be the band and the backing singers (and quite a few Dreamland staff who shuffled off the stage).

An air-raid siren wailed and Vince Staples began to rap…

You are now tuned into the tomb of Jehova
Play my tunes loud enough to shake the room, what’s the hold up?
Heard the world is ending soon I assumed that they told ya
They tryna dinosaur us
So now it’s time to go up

… the drums kick in and we’re off, the crowd go crazy (a little too crazy at first, but they soon calm down).

If you follow the conceptual narrative arc of the five Gorillaz albums, Humanz represents an apocalyptic party after years of self-destruction. These are the end of Dayz. This crowd knows that (and all the lyrics) and we’re going to enjoy the ride. 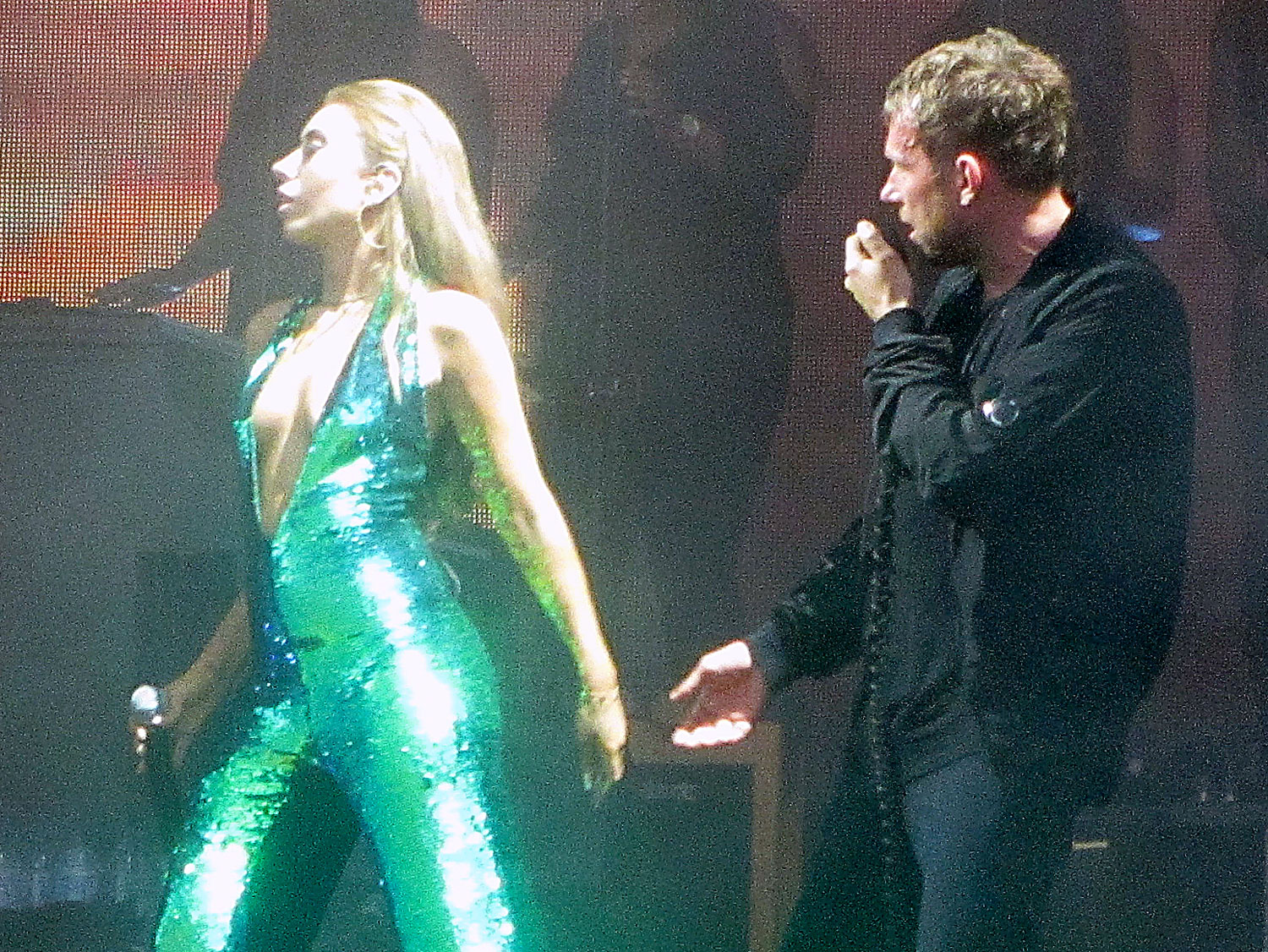 What follows is two hours of communal joy, with each song bringing a fresh collaborator to the stage.

Zebra Katz performs Sex Murder Party in a disco gimp-suit (and gridded mask), strutting like a runway model alongside the tiny jumping-jack of Jamie Principle. It was quite a thing to behold.

Kali Uchis, held into her metallic green jumpsuit by a yard of tit-tape, strutted in eight inch heels as she sang with Damon to She’s My Collar.

My favourite performer of the day was Little Simz, who, dressed like a member of Mao’s red army, rapped over the also currently unreleased Garage Palace.

At times Damon was a little earnest. He gave a short speech about what a weird week it had been, the week of the General Election. “A real surprise and then an inevitable bullshit outcome. But this is only the beginning ’cause there’s some of you out there who weren’t able to vote this time, but next time you’ll be able to vote. It’s going to grow.” 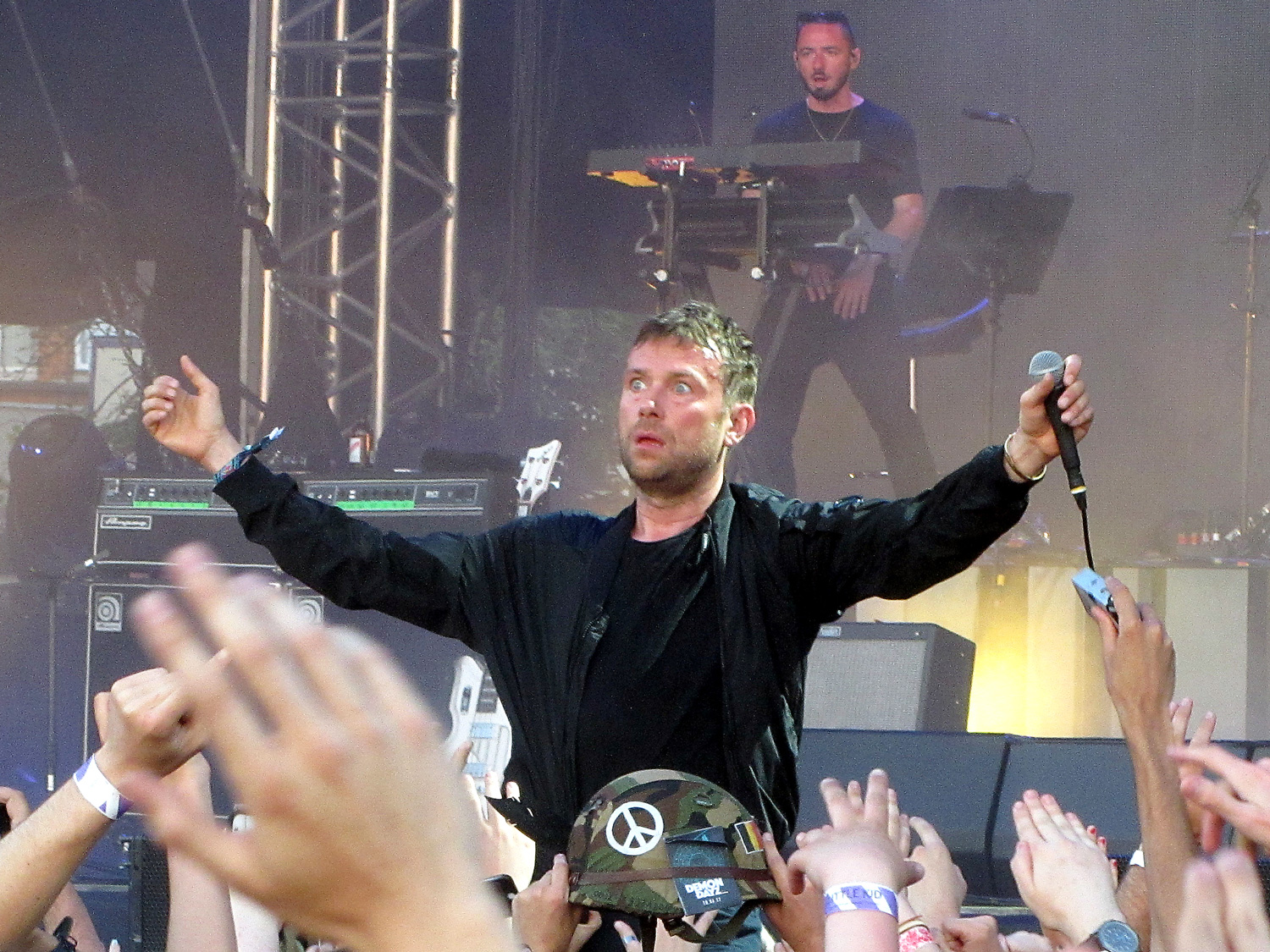 But mostly he just seemed overjoyed that he was on stage with his friends at a festival, centred around an idea that he and his pal Jamie had when sat bored on the sofa twenty years ago. He tells us that Jamie is in the sound booth and will draw us all an individual picture if we ask him. 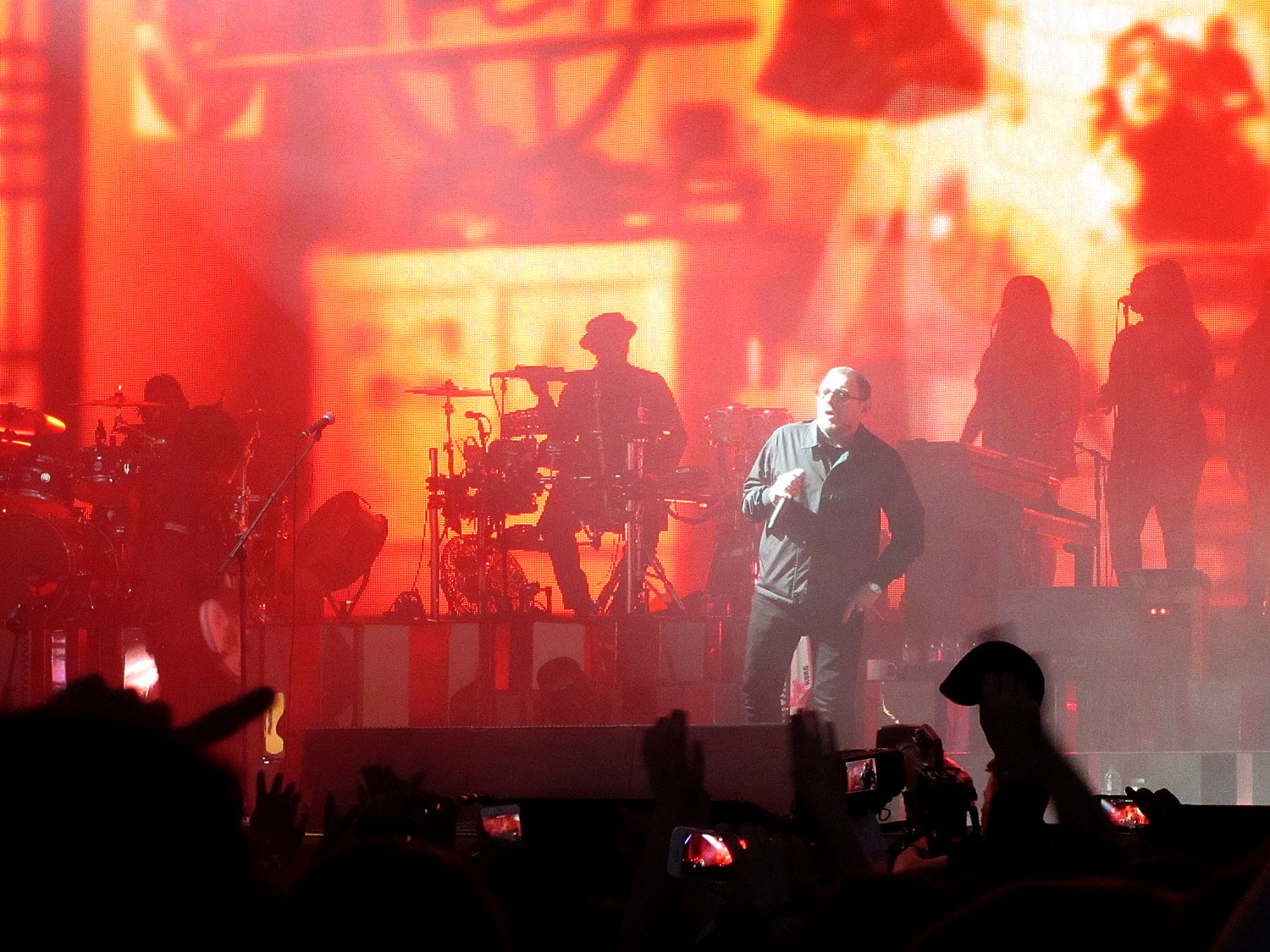 The crowd’s favourite Shaun Ryder, not sure of his next cue

It wasn’t all songs from Humanz. They also played the hits – Shaun Ryder stumbled his way through Dare and, as usual, forgot his cues and the length of the song. “Good night, god bless. Am I done now, can I just fuck off now?” we heard him say before he remembered he had another chorus to get through.

Shaun was there but there were a couple of surprising omissions. Both Grace Jones and Noel Gallagher feature on the album, but neither appeared. We did spot Gary Lineker but he was there to watch rather than perform. 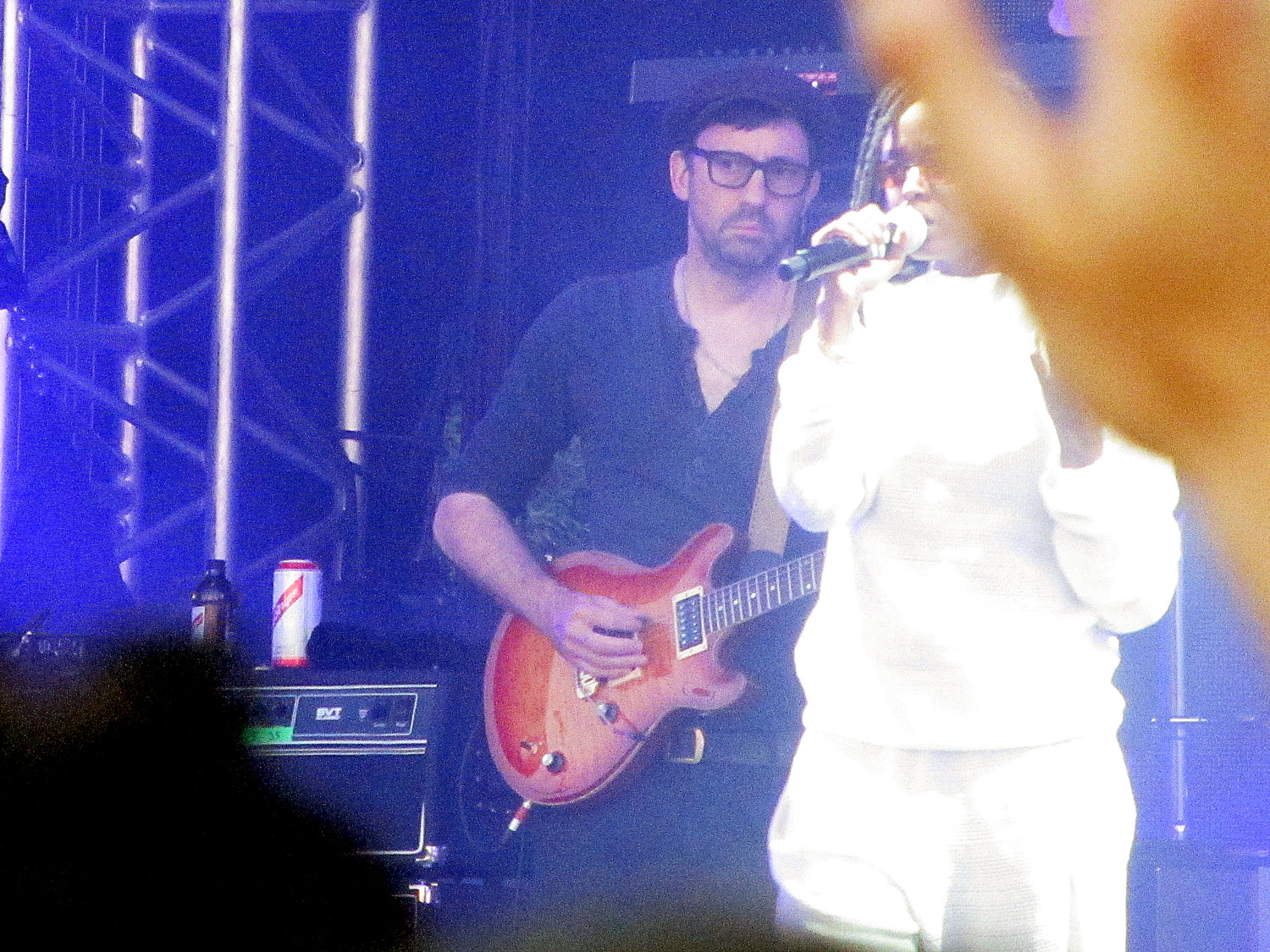 Graham Coxon, playing it low-key behind Kelela Mizanekristos, during ‘Submission’

Even Graham Coxon was there (Blur’s guitarist with whom Damon clashed egos on a regular basis). There was a lovely moment at the end of the main set, when Damon ran over to Graham to point out the antics of Jehnny Beth (the lead singer of Savages), who literally walked across the shoulders of the crowd in her bare feet, singing We Got The Power.

Of course they weren’t going to leave it there. The encore began with a new song and video that the band and Jamie had put together in the previous week, Sleeping Powder. The song sounds as soporific as its title to me but it was funny to watch Damon recreating his own motion-captured moves in front of the cartoon 2D. 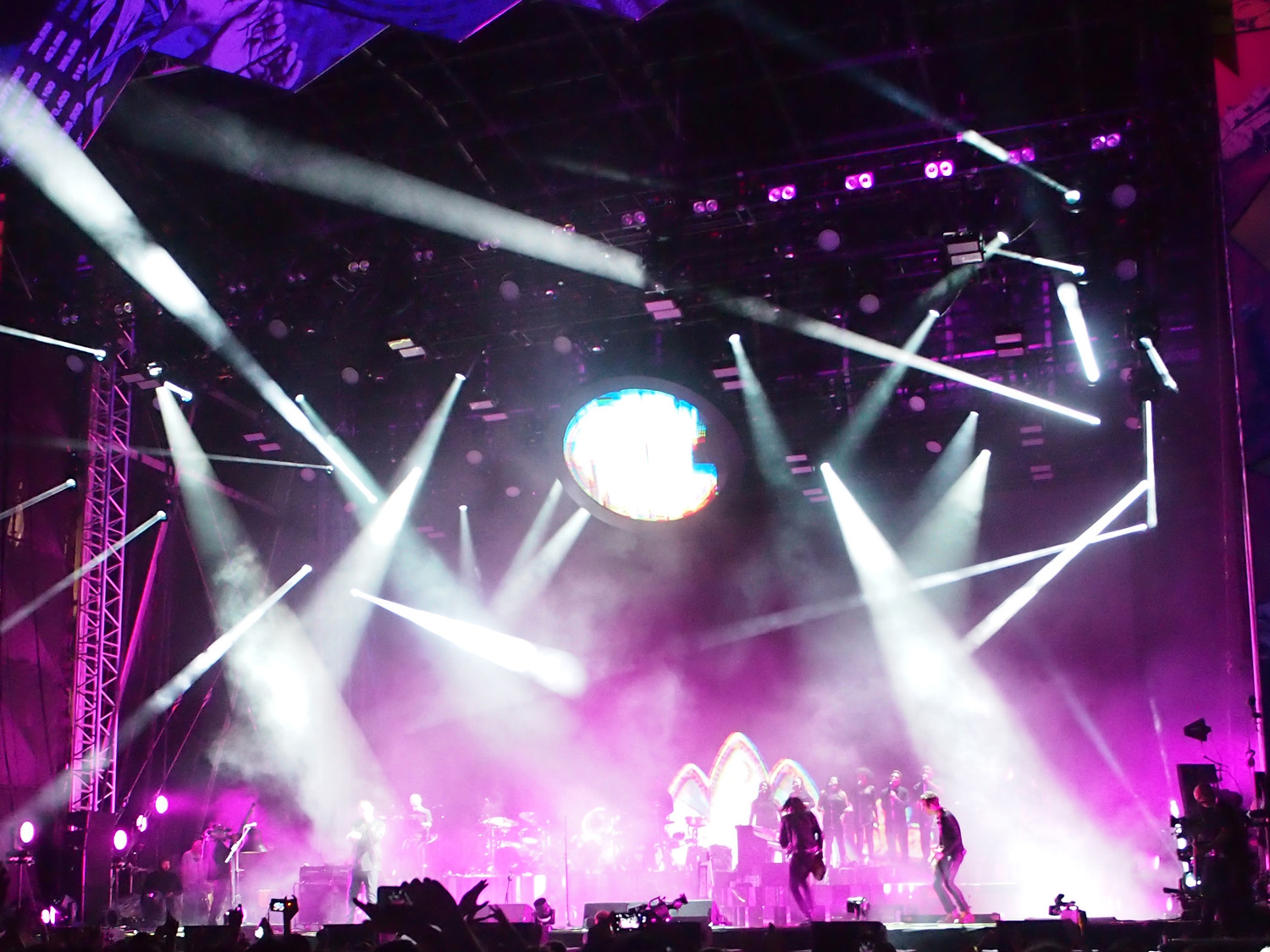 De La Soul’s Maceo provided the booming laughs for Feel Good Inc., to get the party back on track. Next, the excellent Kano was back on stage with Little Simz for Clint Eastwood.

And with the beautifully melodic Don’t Get Lost in Heaven drifting into Demon Days, Damon left us with two words “the first is unity, and through unity we find love…stay safe, stay optimistic…thank you”. The choir sang us out and a perfect day drew to a close. 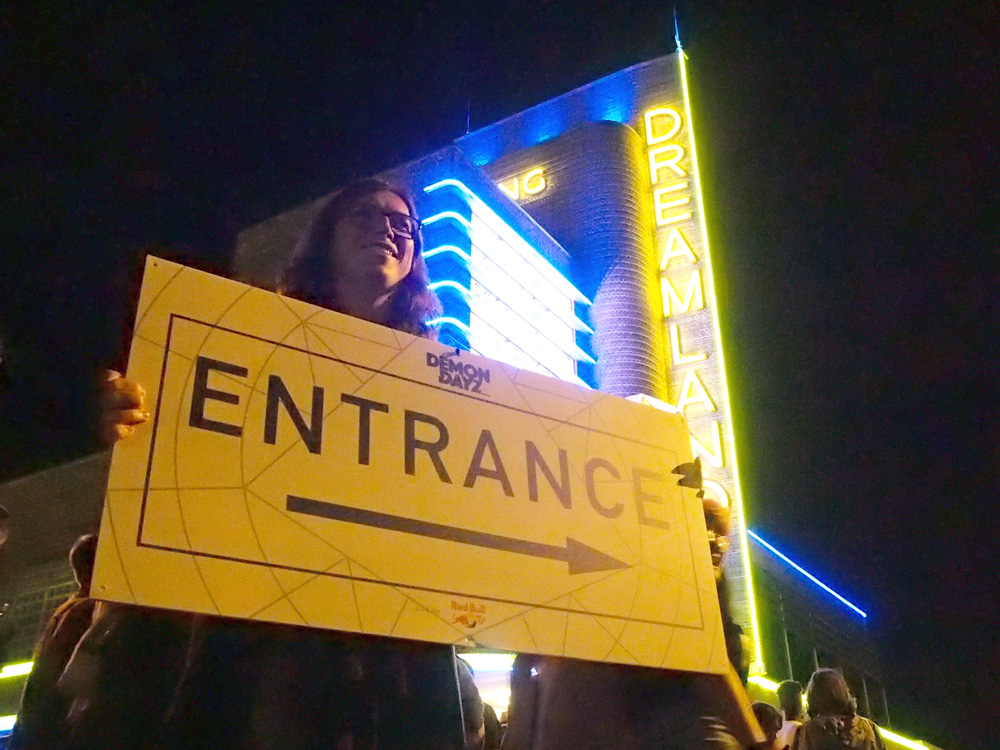 Michael’s son holding a ‘trophy’ from his day out

Actually we hung around for another half an hour waiting for the crowds to clear. There was quite a crush around the park-and-ride. It looked like people were in for a long wait to get back to their cars, but we pushed through and onto the sea-front, past the chip shops and the arcades, past the station (where hopeful people were in for a disappointingly long wait for the next train), and back to our car, just outside the cordoned-off town, for the drive home, singing Gorillaz songs all the way.

You can currently watch the whole Gorillaz set on the Red Bull site. There’s lots of other clips on there too.

The next day a lovely thing happened. I was contacted by the Belgian newspaper, De Morgen. They’d seen a photo I’d uploaded on Instagram and asked if they could use it for an article. Here it is… 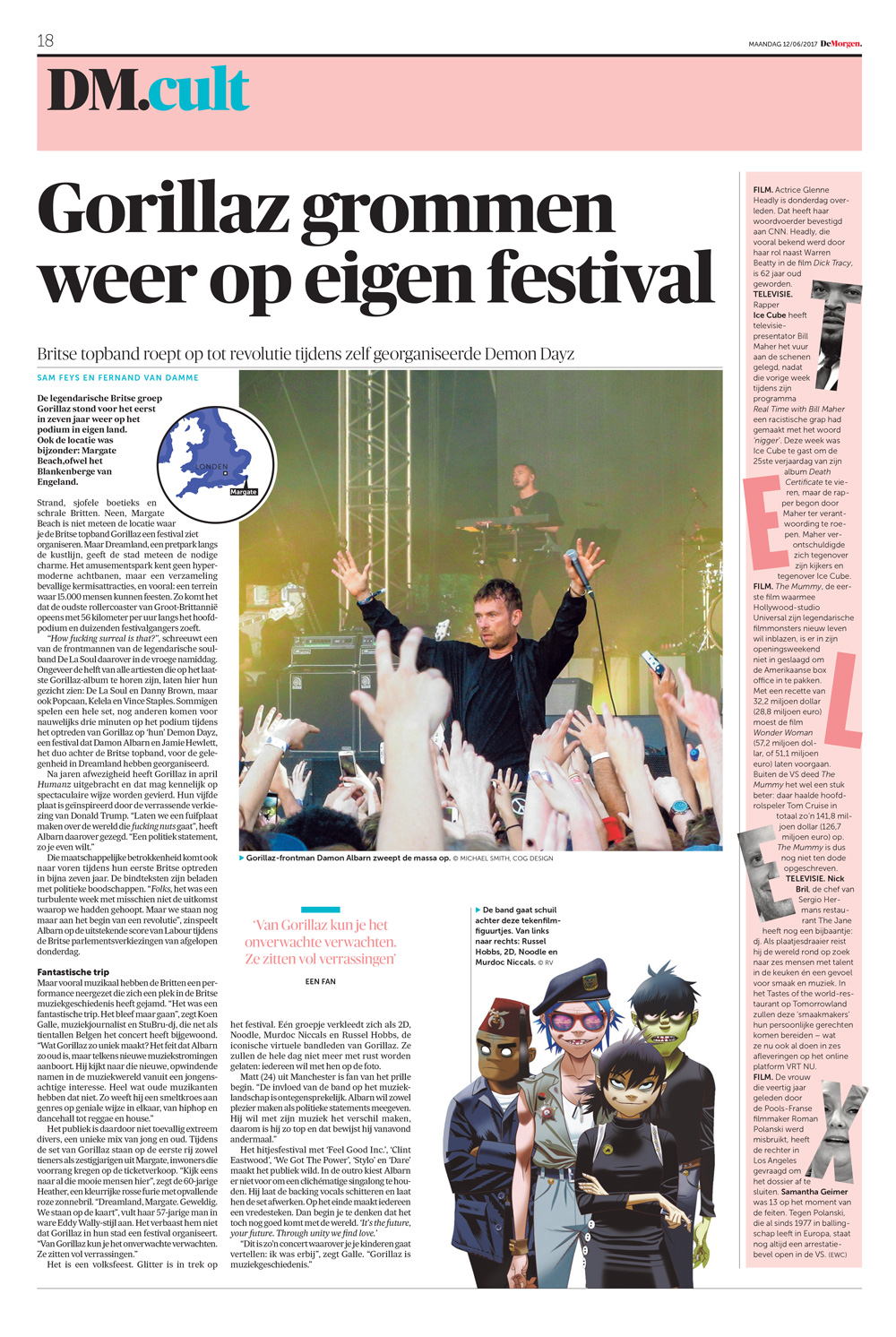 In the last of his #Cog25in25 entries, Michael writes about the projects that kicked-off Cog, including… END_OF_DOCUMENT_TOKEN_TO_BE_REPLACED

We’ve been working with the wonderful Turner Contemporary since before the iconic gallery opened in 2010…. END_OF_DOCUMENT_TOKEN_TO_BE_REPLACED

It’s been a glorious day, Michael and Katherine are at Turner Contemporary in very sunny Margate…. END_OF_DOCUMENT_TOKEN_TO_BE_REPLACED

Art-rocking beatniks with altitude, The Blue Aeroplanes are back on the road with a new album…. END_OF_DOCUMENT_TOKEN_TO_BE_REPLACED