Day three began on the Royal Mile. If you’ve not been to the Edinburgh Fringe I should explain that the Royal Mile is the road that leads up to the castle. It’s a tourist trap, filled with tartan wonders And, for the month of the Fringe, you can’t move for free performances, buskers, and eager young thesps, thrusting flyers at you. Every surface, horizontal, vertical and in between is covered in shouty messages, imploring you to attend their show. 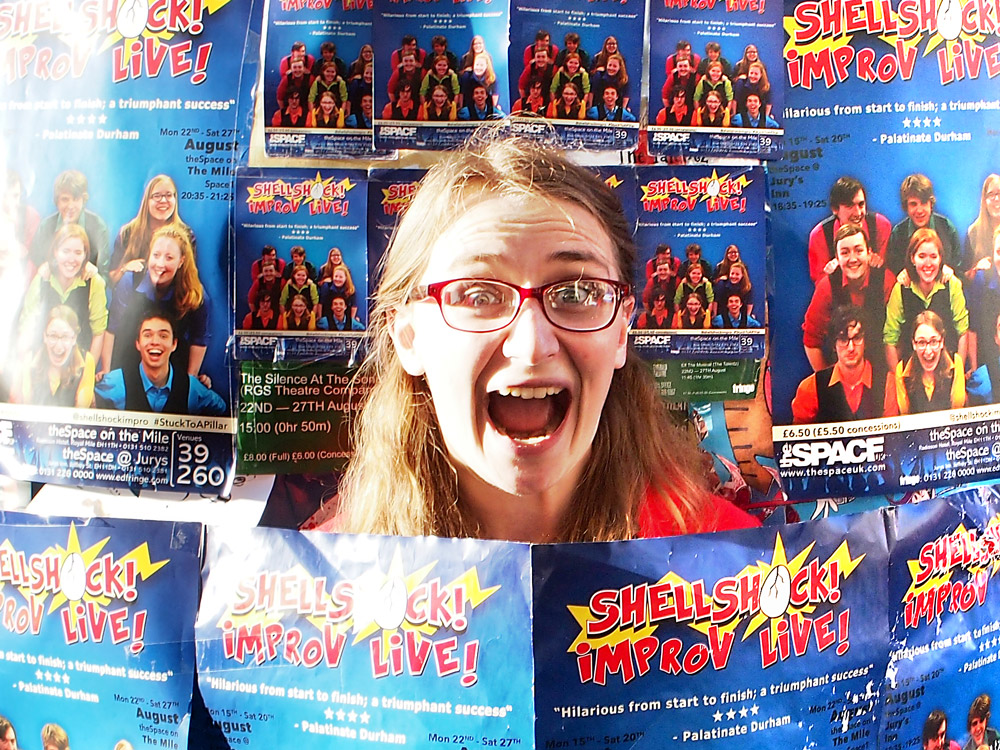 12:10pm
Bottled Spider Productions: The Baffling Adventures of Question Mark Man
The Space on the Mile, Space One 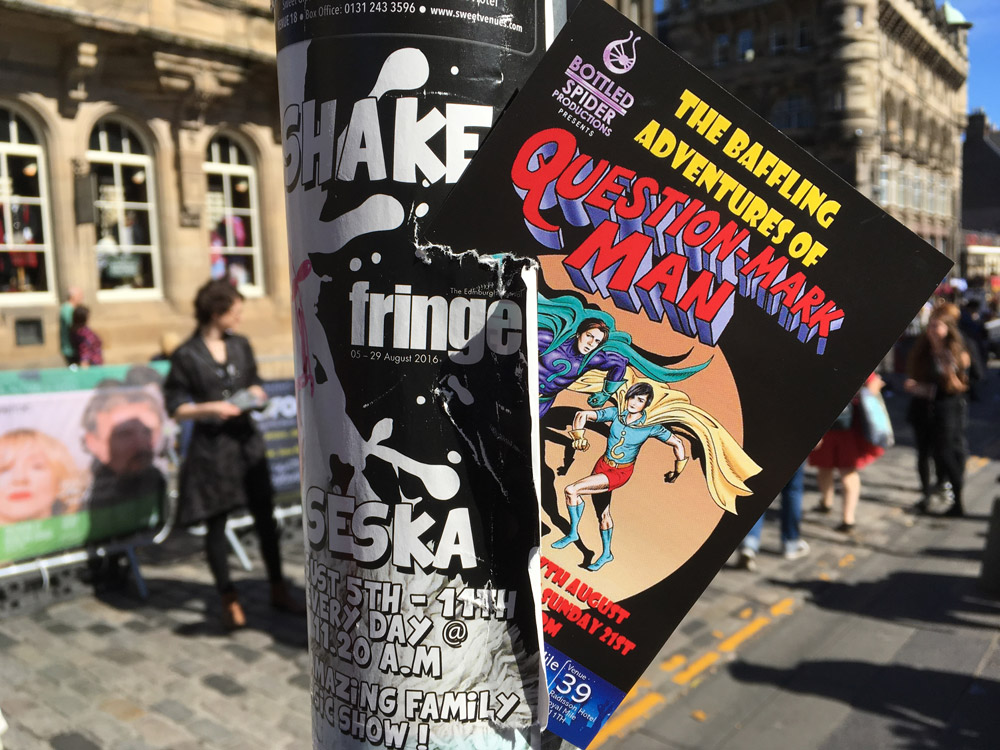 This company (from Nowich) had drawn us in with their excellent flyer. The show seemed to offer the perfect combination of superheroes and grammar pendantry. But it didn’t deliver so I’m going to skip ahead… 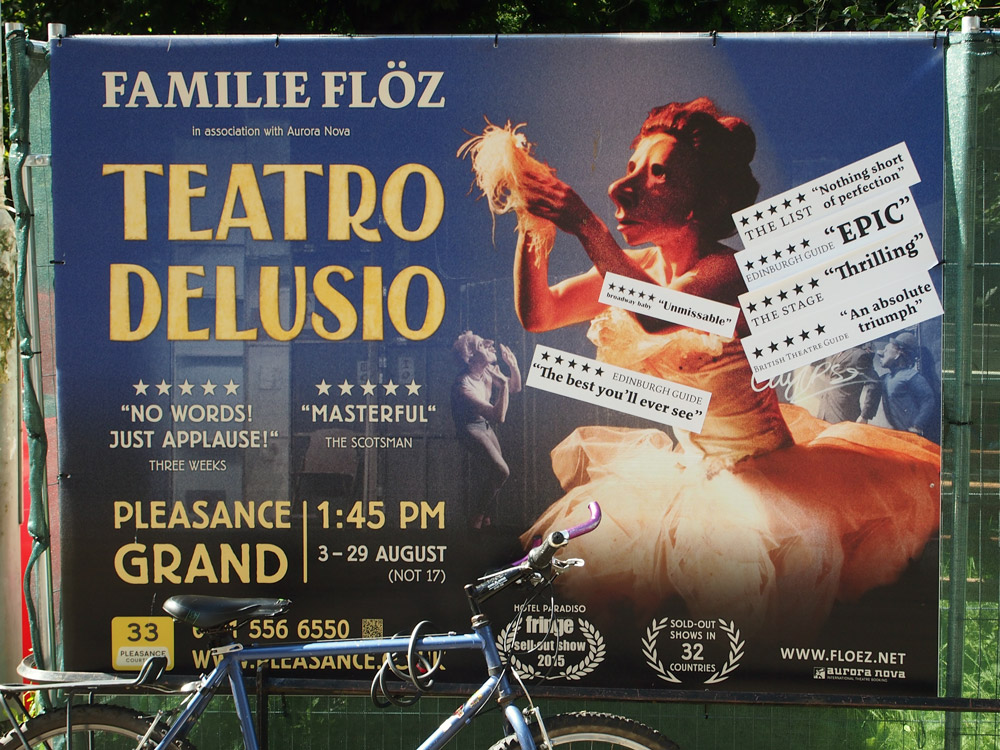 Just around the corner from the Pleasance Courtyard, the Pleasance Grand is a huge venue to fill. It’s no wonder the promoters have spent so much money on publicity materials; this must be the most heavily publicised show at the Fringe.

It’s also a very well reviewed show, for good reason. Three men bring to life the comic goings on, backstage, at a concert hall. Through clever costumes and oversized masks (and a bit of magical stagecraft), the wordless performers become the multiple characters of the play. With fixed expressions on the face of each mask, the performers use physicality and gesture to bring nuanced meaning to the old-timer technician with his two bickering stage hands, the doddering first violin, the arrogant impresario, the commanding conductor, the diva, the ballerina and many more besides, all conjured up before our eyes.

It’s a perfect mix of slapstick and pathos, appealing to the widest possible audience as it moves gently between scenes of high drama and low-farce. My only criticism is that it’s a bit too long. The charm of the show is in its unexpected originality and that was beginning to wane after an hour and 15 minutes. 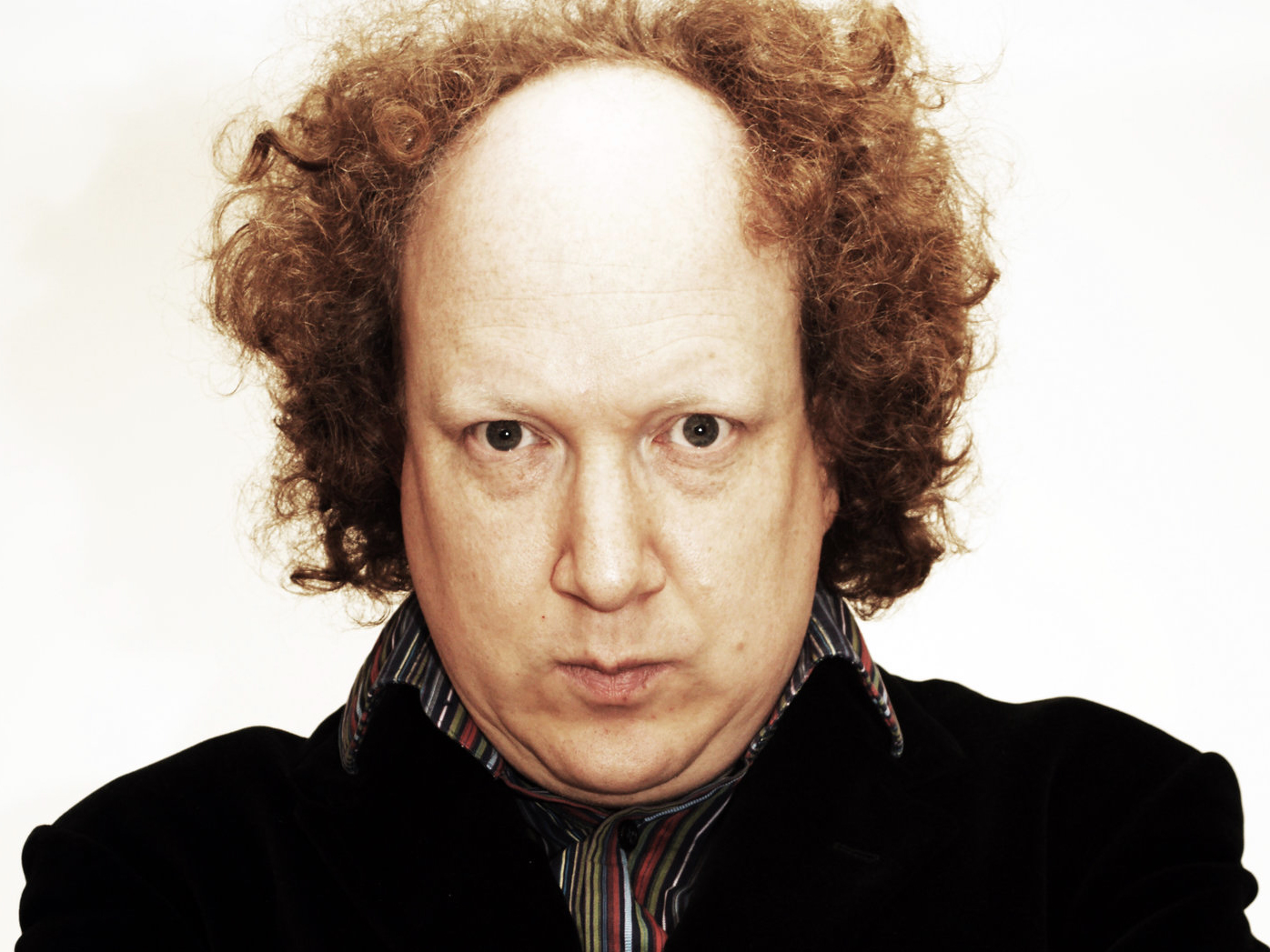 Whilst the rest of my family settled in for back to back musical improvisation (Notflix at Gilded Balloon, and Showstopper: The Improvised Musical back at the Pleasance Grand) I trekked across the city, back to The Stand comedy club (actually to Stand 3, in the basement of a venue down the road). I was there to see comedy circuit stalwart Andy Zaltzman.

Where Mark Watson performs with a giant MZ, Andy Zaltzman has a rather more diminutive illuminated Z. I momentarily wondered why half the bulbs were missing but was quickly distracted by Zaltzman’s very funny pre-show announcements, played over the PA. I found out about the bulbs the next day (you’ll need to read that entry to find out).

These days, Andy Zaltzman is referred to as the less successful half of the podcast duo behind The Bugle. He takes great delight in playing off this, finding a few audience members who haven’t heard of John Oliver and exclaiming that 100% of the audience knows who Andy Zaltzman is.

His show is a typically silly view of the Brexit fall out and the Trump situation. Both are well-worn topics for this year’s Fringe but he brings a genuine freshness and perspective to the material. He also has some great props, including a translation device that take political quotes and translates their true meaning; again, not an original idea but charmingly executed.

Zaltzman is a very funny man, well respected on the circuit and very comfortable in his own abilities. He seems a genuinely happy man who has fulfilled his ambition to be the scorer on Test Match Special (he regards test match cricket as significantly more fulfilling than real life). Good on him. 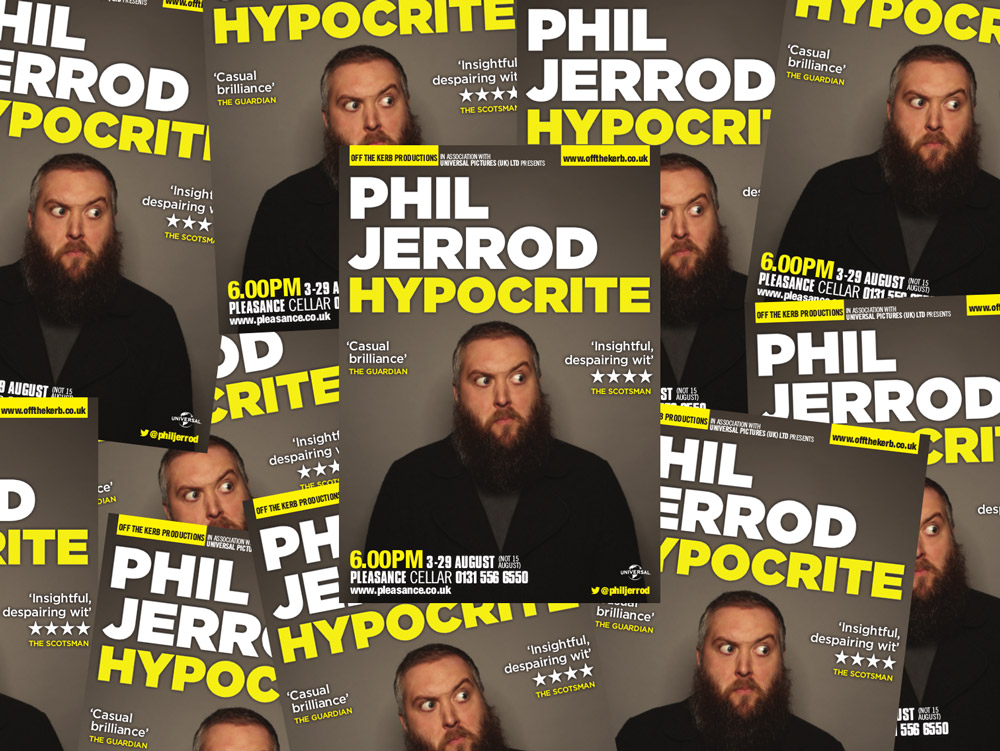 With time to kill before my next booked show, I took a chance on Phil Jerrod in what might be the smallest venue back at the Pleasance Courtyard. A firm believer in judging a book by its cover, I chose this show because Phil looks like a funny man, and Hypocrite is a great title for a show.

I can report back that he is a funny man but this show is only about hypocrisy in the way that Alanis Morissette sings about irony. Actually the show is about lies and maybe about self revelation. He begins by telling us that every comedian at the Fringe seems to end their set with an epiphany but such moments are almost unheard of in real life. This isn’t going to be a show with an epiphany ending, he says.

Phil Jerrod always thought of himself as the type of person who would stand his ground but when he was mugged (inexplicably in a phone box) he found himself capitulating. Rather than explore the comic potential of that situation (Adam Bloom used to do a great 15-minute routine about a similar situation where he persuaded his mugger to return his SIM card) he sees it as a pivotal point of self-reflection: am I really the person I thought I was (lefty, beardy, Brighton-living, well-meaning, nice bloke) or is it all a lie?

Where Andy Zaltzman feels completely comfortable, Phil Jerrod feels neurotic. He’s working through a lot of self-doubt which is both funny and a little uncomfortable, especially when you’re in the front row of an eight metre square basement.

The show did end in a grand (anti) epiphany and I’m still not sure if that was a deliberate lie. 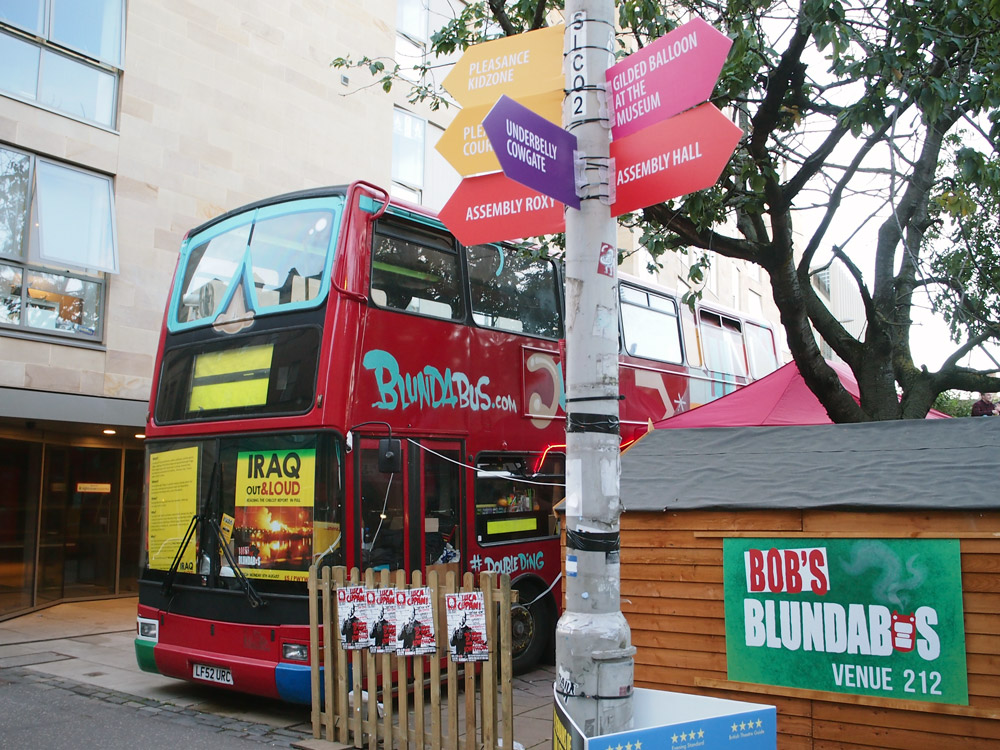 If The Cellar is an intimate venue then Bob’s Blundabus takes things to a whole new level. I arrived a little early and bought a tea from the eponymous owner of the double-decker venue, the comedian Bob Slayer.

The previous show was overrunning so I was milling around outside for a while, talking to people. One thing seemed to unite us all, we’d nearly all been recommended to David Quirk by Daniel Kitson’s email updates.

When the time was right, David ushered us up the stairs of the bus and I found myself in the front row again. This Melborne based comic has a gentle tone and a genteel manner that immediately feels welcoming and inclusive.

His blurb promises moments of metaphorical and actual darkness but that was always going to be difficult to achieve in the daytime on a bus. Even so, he brought his off-beat observations brilliantly to life, using minimal props (a set list, given to each of us, and A2 print-outs of his hilarious text exchanges with friend Mel) and some sound effects, via his iPhone.

His considered pace is a welcome relief from the frantic delivery of others, and his stories of people who record and upload white-noise recordings to YouTube is almost hypnotic.

Quirk is a polished performer who was thrown a little off-balance by a crackling mic and the lack of lighting control but I thoroughly enjoyed his set and hope to catch him again in a venue with foundations.

The Blundabus is a ‘pay what you think it’s worth’ venue which I didn’t realise because I’d bought a ticket in advance. As I came down the stairs to be confronted by the collection bag, I had a split second to decide what to do, to find my ticket or at least explain that I had paid. I went for the cowardly route of smiling inanely and scuttling by as if I didn’t understand what was going on. Bob if you’re reading this – sorry. 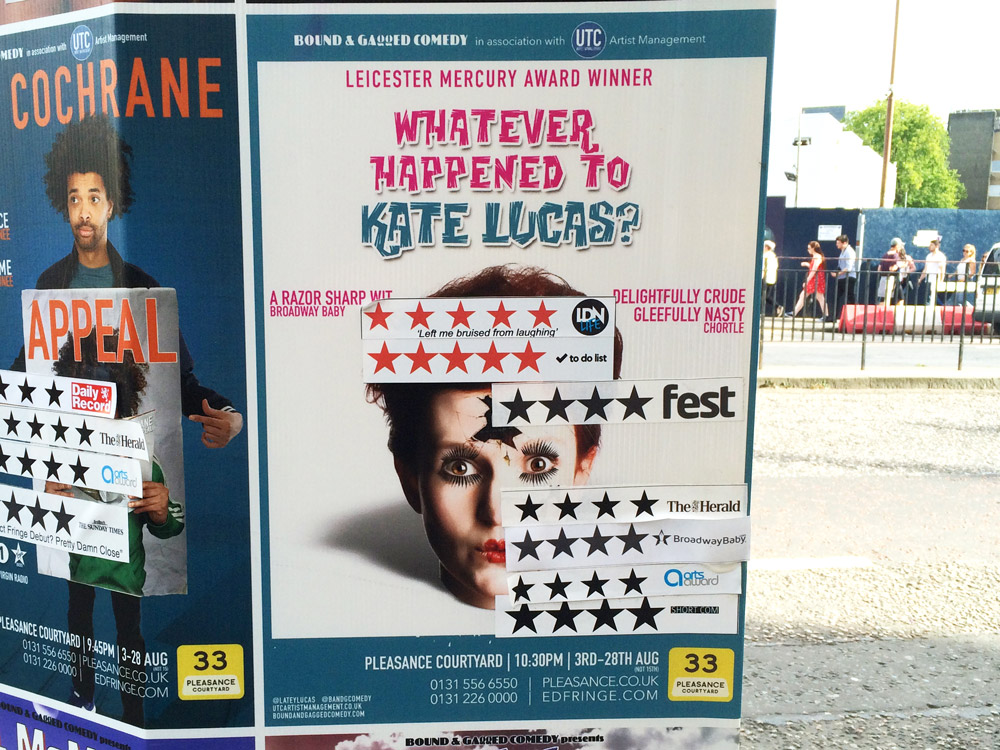 After a quick pint and phone recharge in my favourite stopping point (the Pleasance Dome) I was back at the Pleasance Courtyard (well, just around the corner in an arch called Bunker Two) to see Kate Lucas.

I’d booked it on a whim, based on reviews. I know now that the poster really doesn’t describe her act at all well. Once again in the front row I was knotted up inside as I saw a sweet young woman walk in and pick up an acoustic guitar. Oh God, what was I trapped into seeing?

Well, actually, a brilliantly funny and surprisingly dark set that ended with me singing and clapping along whilst other audience members played plastic maracas, some spoons and a Pringles pot.

Kate is a demur, pretty, mid-twenties woman, with an angelic voice. The juxtaposition of that innocent look and the filth that comes out of her mouth is where a lot of the comedy lies (hence my not being keen on that doll’s head poster).

“Hello, are you well? Good, cause I hate the sick” is the opening line that convinced me everything was going to be OK.

The central conceit is that Kate is recalling a time when, living in a shared flat in Brixton, she convinced herself she had life ending diarrhea, hilarious right? Rather than a wonderful life flashing before her eyes she sees the horror of a job she hates, awful boyfriends and nights she regrets, and she sings about them.

My favourite song, How Could You, You Bastard (see above), has a beautiful comedic build from a mild start to a Frankie Boyle-esque ending and contains my favourite lyric: “I hope your grandma’s condition slightly worsens… and when they switch off the machine she looks forlorn”

A few of her songs are on YouTube, do look them up but do also pay to see her live, she is a very funny, wicked woman.

Day one of Michael’s trip to Edinburgh Festival and Fringe, with Russian Shakespeare and a multiplayer… END_OF_DOCUMENT_TOKEN_TO_BE_REPLACED

Day two of Michael’s trip to Edinburgh Festival and Fringe, with Vikings, vampires, werewolves and a… END_OF_DOCUMENT_TOKEN_TO_BE_REPLACED

Day five (and a bit of six) of Michael’s trip to Edinburgh Festival and Fringe, with… END_OF_DOCUMENT_TOKEN_TO_BE_REPLACED