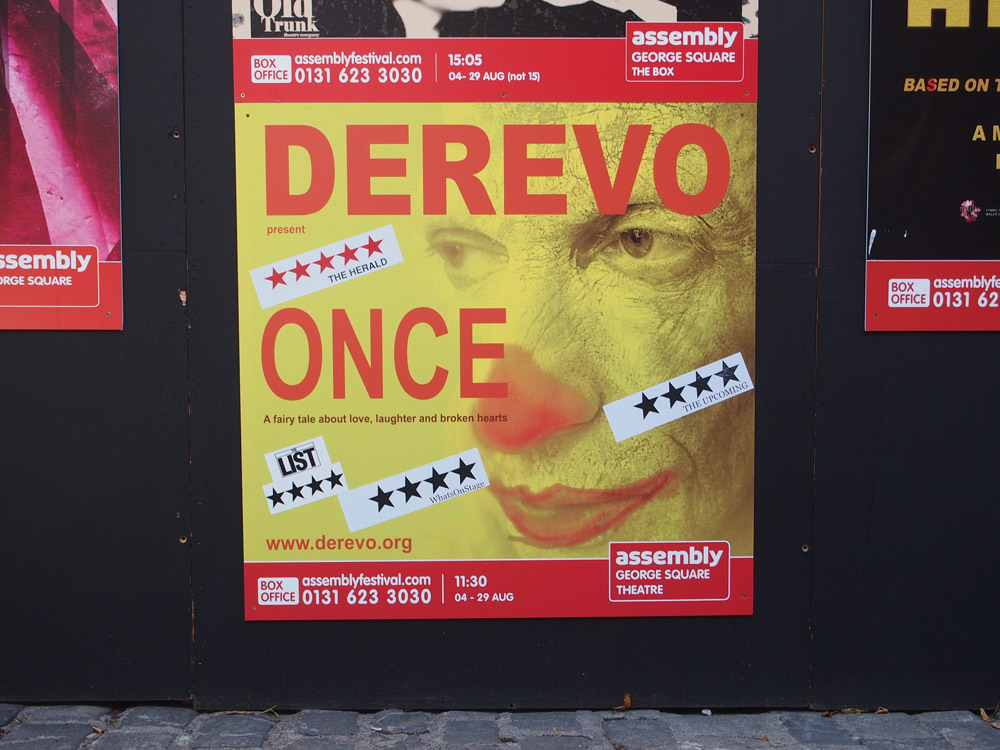 I left my family, eating a late breakfast in our guesthouse and walked across town to The Assembly Theatre on George Square.

I had no idea what to expect from Russian dance company, Derevo’s Once. But the poster looked great and those four and five star reviews were convincing.

Apparently this was a revival of a 1998 Fringe show, a fairytale story of one young woman, pursued by two men: a clown and a sinister gangster figure. The show has many of the same cast as that original production which is where my credulity stretched too far. I’m sure the lead was a beautiful young woman once but now she’s a stunning older woman (with an admittedly incredible physique); making her the object of pursuit felt a bit weird rather than a clever subversion of the genre.

I found the whole thing old-fashioned and hammy, with staging that wouldn’t be out of place at a school panto. But I was on my own, everyone else revelled in the hilarity of it all, and indulged the company in several rounds of applause and returns to the stage (they even opened a bottle of celebratory Champagne). It seems I am out of step, you may love Derevo but I won’t be seeing them again, Once was enough.

2:30pm
Anything That Gives Off Light
Edinburgh International Conference Centre

From the Fringe back to the Festival, my next stop was the vast building, the EICC, to see a collaboration between the roaming company National Theatre of Scotland and the New York company TEAM.

“I’m calibrating my Scottishness,” announces Brian through the fourth wall to set the agenda for this fast-paced, physical play.

The cast is just three characters – an American woman, Red, running away from problems in her marriage; Brian, a Scottish exile, returned from England to repatriate the ashes of his gran; and his childhood friend Iain who had stayed behind and lives with his parents. And there’s a three-woman band who bang out some stirring tunes on drums and pipes.

The three embark on a road trip, looking for a place to scatter Brian’s granny’s ashes. Along the way we learn of her anti-authoritarian leaning (she gave the boys eggs to throw at police cars during the poll-tax riots) and they struggle to find a place that she would consider to be the true Scotland.

They visit battlefields and prick pompous myths. As well as covering centuries of Scottish history, the play expands its reach to attack Scotland’s most pervasive export: the free market capitalism of Adam Smith that Brian’s granny hated so much. They even try to tackle global warming and to draw parallels between ‘the clearances’ and the mining settlements of the American West. These are big, complex topics, skimmed over like pebbles on a loch.

The aspect of the production that I didn’t quite understand was: who is it aimed at? To this educated Edinburgh audience, there seemed like far too much exposition. We were told about Culloden, Bonnie Prince Charlie, the clearances, even the history of Scot-ish tartan. Red became that character in TV shows who has the science or police procedures explained to her.

So, what is Scottish? Anything That Gives Off Light, apparently. It’s a cracking 1hr 50mins with some laughs, great dialogue, some engaging and touching moments and a soundtrack that stirs a patriotic heart (even for a non-Scot like me) but I’m not sure it hangs together well enough to be called a great play.

After a well-deserved round of applause, the band came back and struck-up, ready for a sing-a-long encore. That was my cue to leave (as I had to rush for my next show). I was in the middle of the row so had to ask the elderly audience to move for me. Each of them tutted and shot me an old-fashion Scottish look.

4:40pm
Katie Boona: All The Things I Lied About
Summerhall, Roundabout 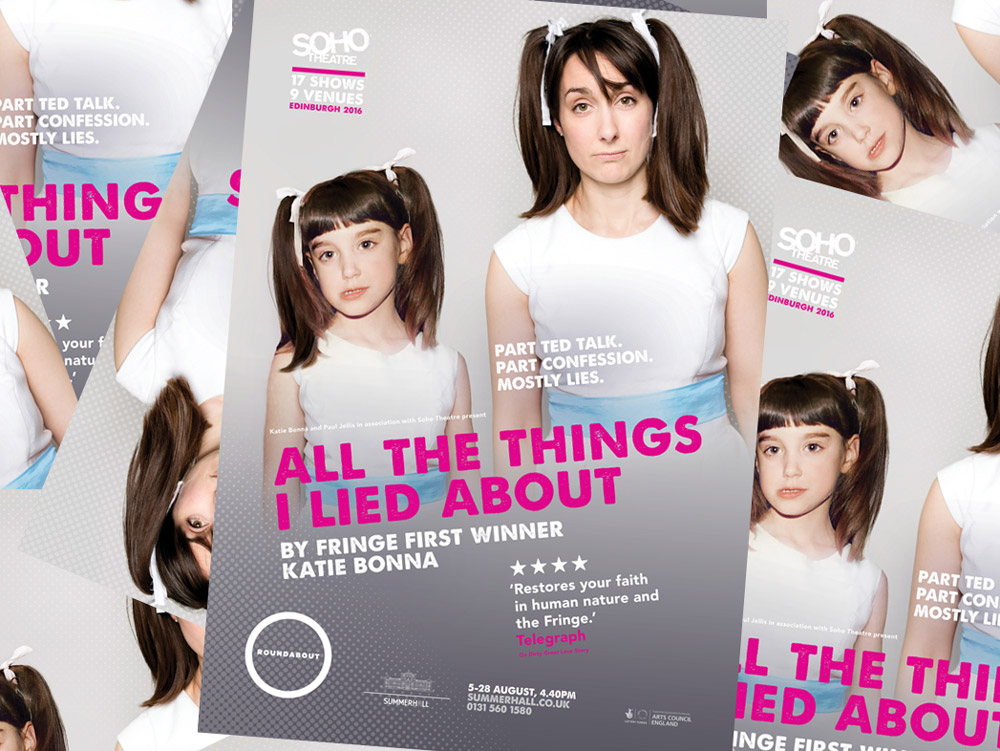 This was my first trip to Summerhall. Google maps told me it was a 29 minute walk away, and I had 16 minutes until the show. I ran, mostly through the park, in the atypically Scottish sunshine.

I arrived just in time and walked from the bright light into the blackness of the Roundabout performance tent, sweat dripping into my eyes.

Seconds later, Katie Bonna, in character, stepped into the middle of the space and told us about the show. “I’ve always wanted to do a TED talk” she explains. They haven’t asked her but she’s written one anyway. She’s bought a round red rug from IKEA and borrowed an earpiece mic from a children’s entertainment company. In a moment she’ll be back with dramatic music and lighting…

Katie strides into the space to deliver her talk. It’s all about lying. She tells us how she learnt to lie as child, to manipulate her parents, to torture her sister (we’ve all made our sister drink a warm cup of our urine, right?) She lies about how much she gives to charity, how often she goes to the gym, and about how many Coen Brothers’ films she’s seen. She keeps a record in her ‘liary’.

Slowly, masterfully, the TED talk breaks down and Katie is talking directly to us about a secret within her family, about incremental lies, about coercive control and about the lies we tell ourselves to deal with cognitive dissonance. And by the end she’s scared, scared that she can’t be the person she wants to be, terrified that she’s already lied too much to turn back; will she always hurt the people nearest to her?

It’s a clever, touching, uncomfortable and truthful piece of theatre. I loved it, no lie. 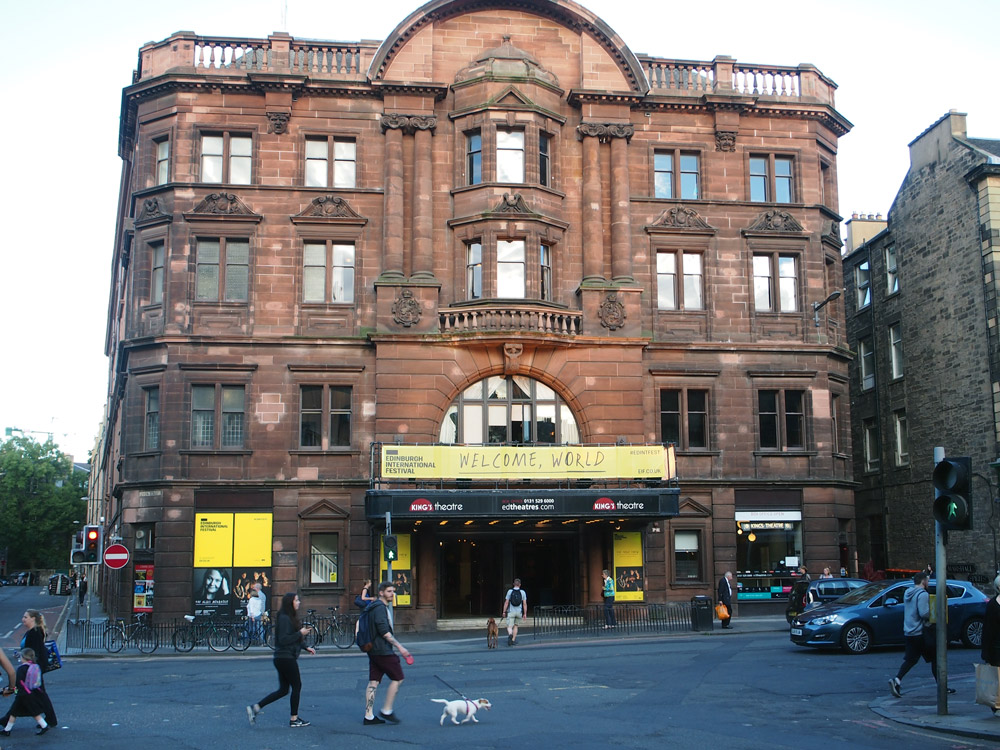 It took me a while to calm down after Katie Bonna’s show. I could have raced to join my family at the Roald Dahl inspired Wonderman (they tell me it was excellent) but instead I sat in the park catching up with emails, before making my way to meet them at the swanky King’s Theatre.

We were there to see James Thierrée’s latest spectacular show, The Toad Knew.

The Festival guide describes this show as exploring “the raw, unforgiving love between brothers and sisters”. To be honest the ‘story’ is unfathomable so if you can read that meaning into it then good for you. But the description was interesting to me because I’d seen James’s sister, Aurélia Thiérrée, ten years ago at Lyric Hammersmith in the spectacular Aurélia’s Oratorio. They are the grandchildren of Charlie Chaplin and you can see his legacy in the work of them both.

Aurélia wasn’t in this show but his ‘sister’ (if that is who the character was supposed to be) was played by contortionist Valerie Doucet who moves and manipulates her body in preternatural ways. She held me mesmerised throughout.

The show opens with a singer, caped in red velvet. She walks in front of the theatre’s velvet curtains and is swallowed up by them. The curtains don’t part they collapse and then seem to fly off, stage left. Behind them is a Dali or Hieronymus Bosch dreamscape. A pile of metal, assembles itself into a huge spiral staircase, straightening its ‘limbs’ and clicking into place as Thierrée climbs and then spins, hanging from their steps . I could have left then and felt I’d had value for money.

The next hour and a half was a delightfully muddled mix of classic clowning and awesome spectacle. Each of the five performers brought a lifetime of practice and training to the stage; they were an awesome ensemble. James Thierrée overdid his body-popping mime act a little but why shouldn’t he, it’s his show?

They tumbled in and out of a pond, clung to a bucking mechanoid, captured a light essence and scaled a bizarre suspended machine to bring order to their world, all to a haunting, ethereal soundtrack. If there was a story I have no idea what it was, and if the eponymous (and charmingly low-tech) toad did know, he wasn’t letting on.

An absolute treat from beginning to end. 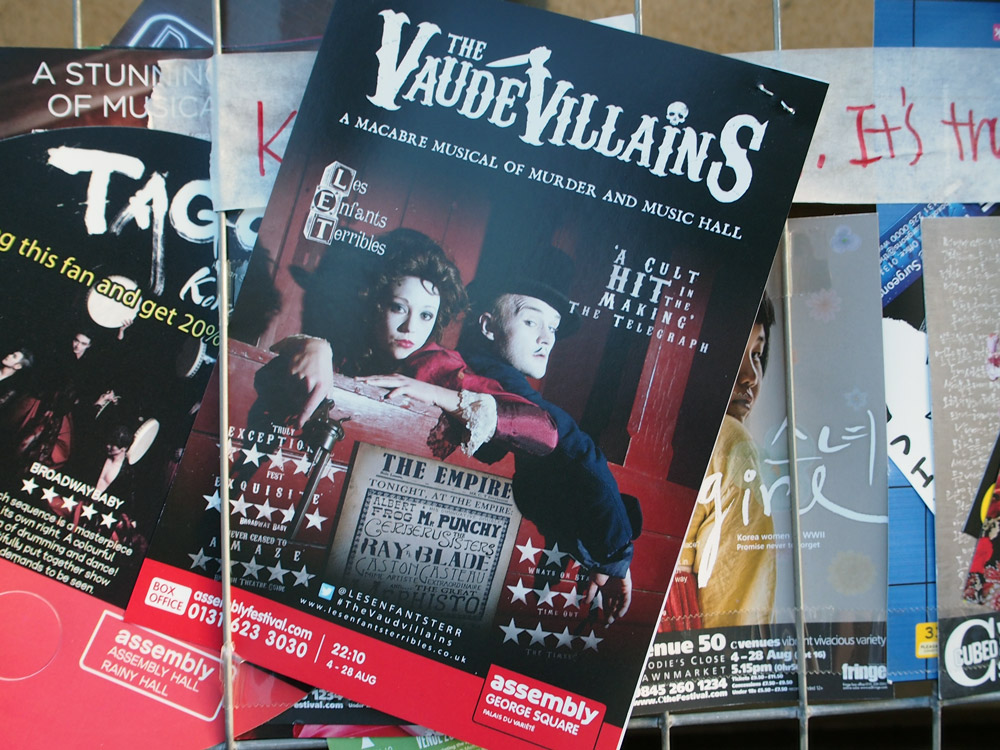 For our last show of the Fringe we chose to visit the Assembly Spiegeltent in George Square.

We’ve seen several shows from Les Enfant Terribles, they do gothic humour very well. This show was a whodunnit murder mystery. During the opening number, the impresario of a Victorian Music Hall is found dead. He’s been shot, stabbed and strangled. Which of the acts could have committed the crime? All are implicated.

At first they all proclaim their love for Charlie but it is soon revealed that each act has a dark secret and Charlie kept them all. Each of them has a tale to tell and they do so through song and schtick. Not the sort of show I’d normally seek out but well crafted and great fun. A little lewd but never crude, a little risqué but never risky, the show provided the perfect end to our family outing in Edinburgh.

But it wasn’t quite the end for me because I figured I could squeeze in one more show before tomorrow’s noon train back to London. 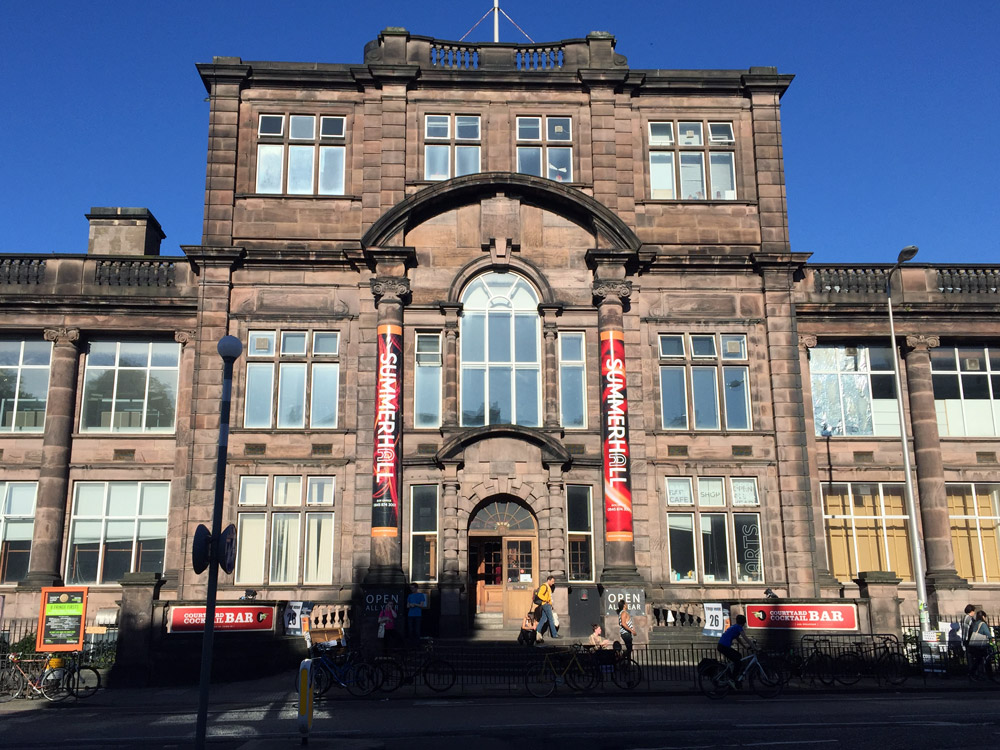 10:15am
Francesca Millican-Slater: Stories to Tell in the Middle of the Night
Summerhall, Red Lecture Theatre

I left my family to their breakfast (and my packing – thanks family) and headed back to Summerhall. This time it was me who’d underestimated the distance so I arrived a couple of minutes late. Thank you to the kindly door person who sneaked me in the back.

Francesca Millican-Slater’s one-woman performance is an all-night radio show. Her voice pours into the microphone with the warmth of hot milk but her tales are enough to keep you awake.

Three differently illuminated podiums and cleverly controlled lighting move Francesca between intimate uplit talk-show host, and controlled and deliberate tale-teller. Her stories are slices of sad lives rather than tales of horror, they are glimpses behind the closed doors of an unnamed city.

There’s a call centre worker who spends her evening ringing numbers in sequence, wondering how long it will be until she finds someone who knows her; the meat-packing worker who’s condemned to being pecked by offal-loving seagulls after an attention seeking prank goes wrong; the man who spends his savings on a dying act of friendship, and then has to live with the consequences for years because his death didn’t come when expected.

This was a melancholic but worthwhile last show for me, and reminded me of the many nights I’ve spent awake, after the Shipping Forecast, drifting in and out of random programmes on the World Service.

Half an hour later I was sitting on the London-bound train, with my family, waving our Edinburgh adventure goodbye, and vowing to return. Maybe I won’t leave it 26 years before my next visit.

Day three of Michael’s trip to Edinburgh Festival and Fringe, with performances in a cellar, a… END_OF_DOCUMENT_TOKEN_TO_BE_REPLACED

Day two of Michael’s trip to Edinburgh Festival and Fringe, with Vikings, vampires, werewolves and a… END_OF_DOCUMENT_TOKEN_TO_BE_REPLACED

Day one of Michael’s trip to Edinburgh Festival and Fringe, with Russian Shakespeare and a multiplayer… END_OF_DOCUMENT_TOKEN_TO_BE_REPLACED