My first full day in Edinburgh was devoted to the Fringe. First stop was Stewart Lee at The Stand, the legendary comedy club in the New Town to the north of the city. I had time to kill beforehand; my family had gone to see an improvised Jane Austen show – Austentatious – which they said was excellent but sounds as awful to me as an hour of Stewart Lee sounded to them. 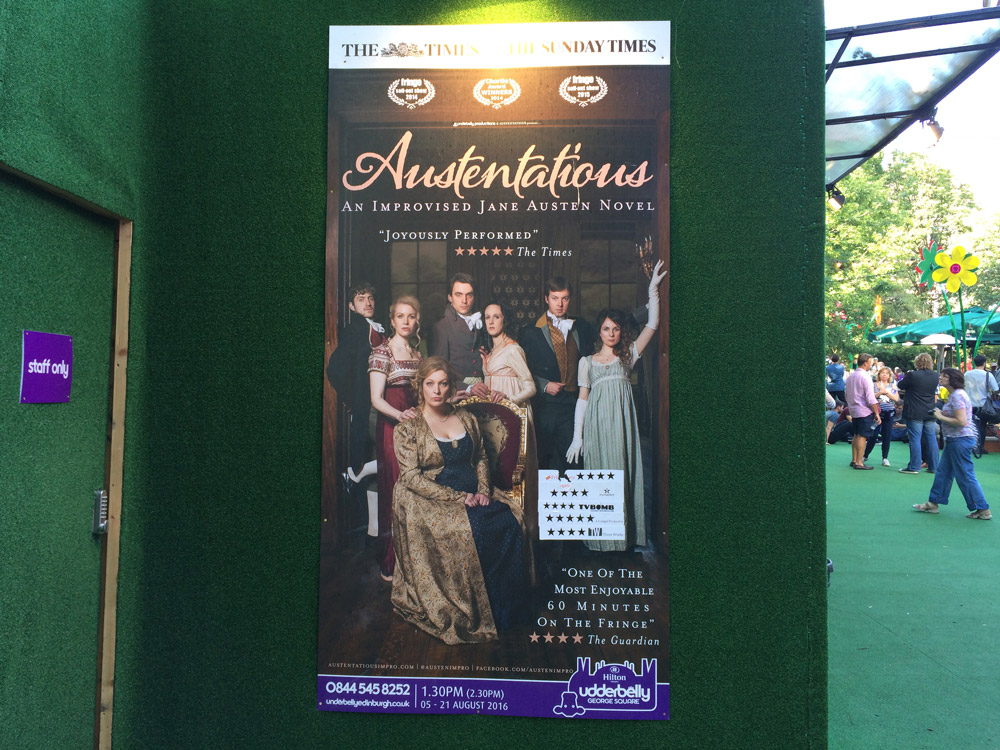 Yesterday we’d queued to get into venues which allowed us in just before the start time (the discipline and organisation is very impressive). So, knowing that the start time was 12:25 I went for a walk, to get to know the area.

When I arrived at the venue at 12:15, there was a long queue which I politely joined. After 5 minutes there was no sign that we were being let in so I asked, “this is the queue for Stewart Lee, isn’t it?” “Yes, we’re hoping to get in”. I’d joined a queue of people without tickets. Embarrassed and feeling a little caddish at abandoning my queuing community, I walked down the steps to the basement entrance. I was, I think, the last person in. The room was rammed, the only space I could find, was standing at the back, half blocking the path to the toilets. Actually, it wasn’t a bad vantage spot for the show as everyone was too scared to get up to use the loo. 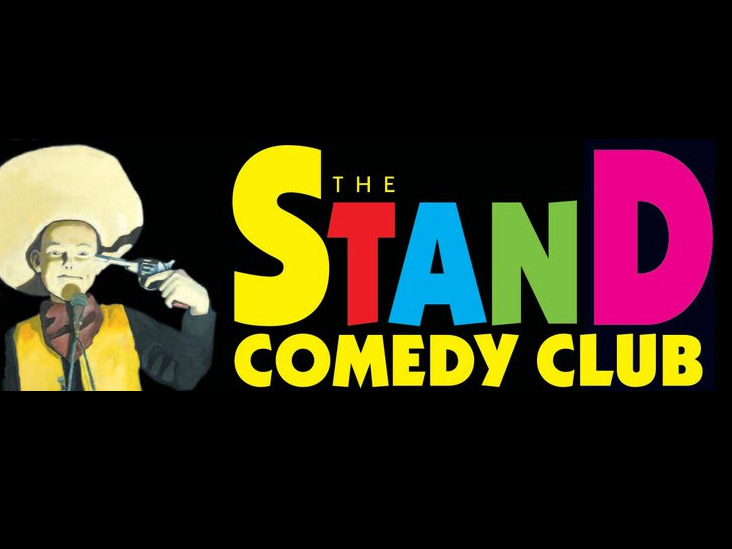 I love Stewart Lee. I revel in the deconstruction that he brings to his performances; I cherish his (mock or not) bitterness towards successful peers; and I bloody love how he tests the limits of what an audience will put up with, stretching a metaphor into such base extremes that our patience would snap with any other comedian.

Despite the (mock or not) in-progress nature of this show, it was great. I’d seen much of the material before but it never disappoints – like watching a great magician or musician, it’s the performance that’s thrilling. “I saw that Stewart Lee the other day” “Was he funny” “No, but I agreed the fuck out of him” – I’ve heard him deliver that line a dozen times and it makes me snort with laughter every time. 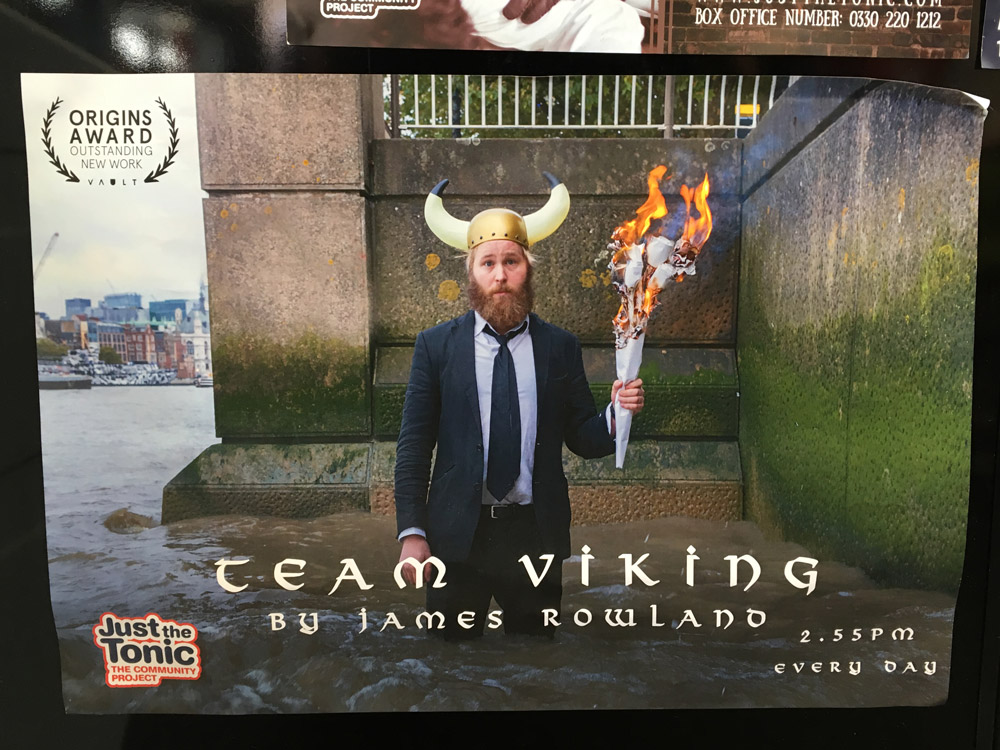 I walked across into the Old Town to meet with my partner while our sons were at a Dracula show from Let Them Call It Mischief.

The Grassmarket Community Project is an interesting place doing great work for the community. It was also the friendliest and most laid-back venue we visited (and served great tea).

James Rowland was waiting for us in a small room, below a noisy wood-working workshop, next to the gents toilet (with its occasional hand dryer), with an intermittently working lighting rig, and fans trying to keep the temperature down to sweltering. Once we were all in he took to the tiny stage and explained that he would return, in character, after the show’s only lighting change. He turned off the main overhead lighting and stepped up in front of us. We were enthralled and lost in his world, immune to distractions from that moment on.

For 60 minutes he told a tale of friendship, love and loss. Beautifully written and perfectly performed he had us laughing and crying about three lifelong friends, their love of the Kirk Douglas film, The Vikings, and their passage from carefree childhood to the irresponsibility of adulthood. There are three funerals in an hour but it’s still a very funny show. I don’t want to give away the plot because I want you to go and see it yourselves; I’m sure the success of Edinburgh will encourage a tour. 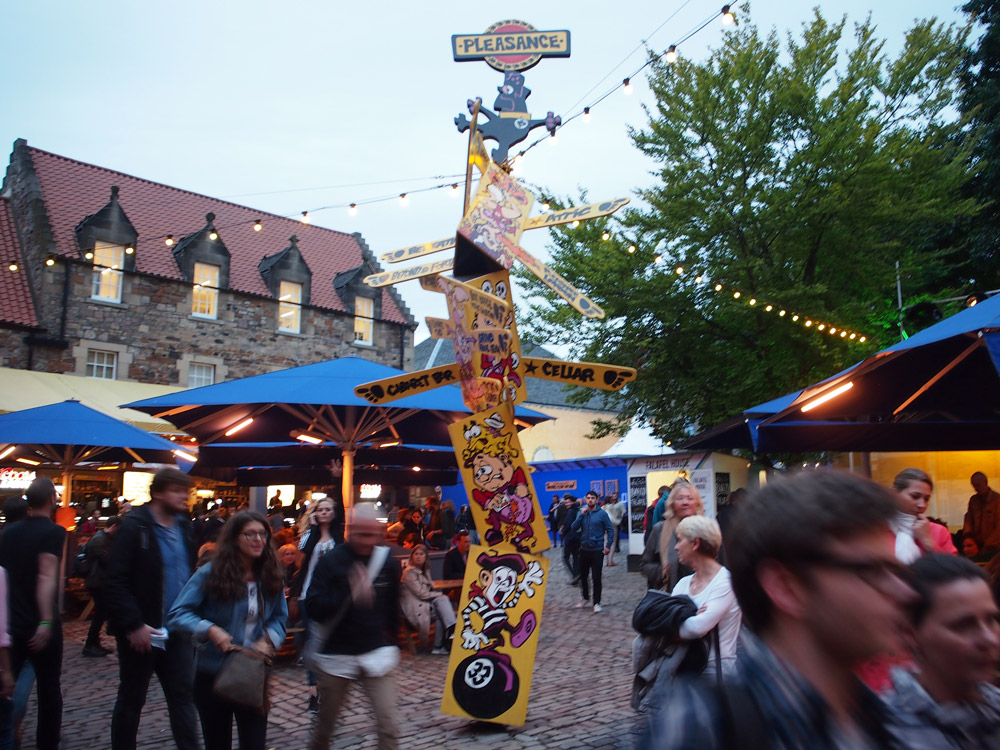 Our next stop was Venue 33, The Pleasance Courtyard. With 17 performance spaces, turning round shows with amazing efficiency, this is the self-proclaimed ‘Heart of the Fringe’. We stayed for the rest of the day, and revisited many times during the week. We had ‘big show’ tickets booked for later that evening and found two fun, last-minute bookings to fill the space between. 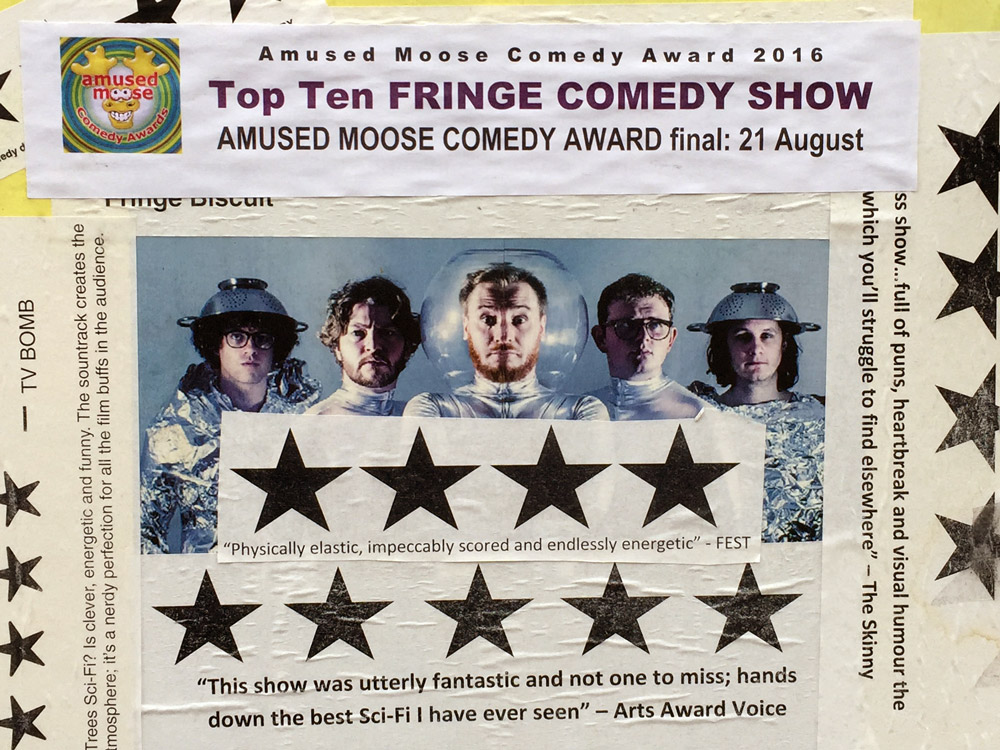 We joined the long queue for Pleasance Two and were marched in. A drummer and keyboard player were improvising some vaguely genre-inspired jazz. This was a full-family outing and our sons were already worried; what had they let themselves in for? They needn’t have been concerned. If you were to try to describe an Edinburgh Fringe show, this would be it.

Sleeping Trees is a three-man company, the two musicians were excellent add-ons for this show, providing sound-effects and musical atmosphere throughout. Sci-Fi? is described as the last of their trilogy of genre shows, following Mafia? in 2014, and Western? in 2015. The show is a mix of physical contortions, mime, songs and overacting. The biggest laughs come from improvised moments; whilst the actors stay in character(s) you can see the musicians anticipating each piece of comic one-upmanship. It’s an extremely accomplished and polished show from three very funny men. 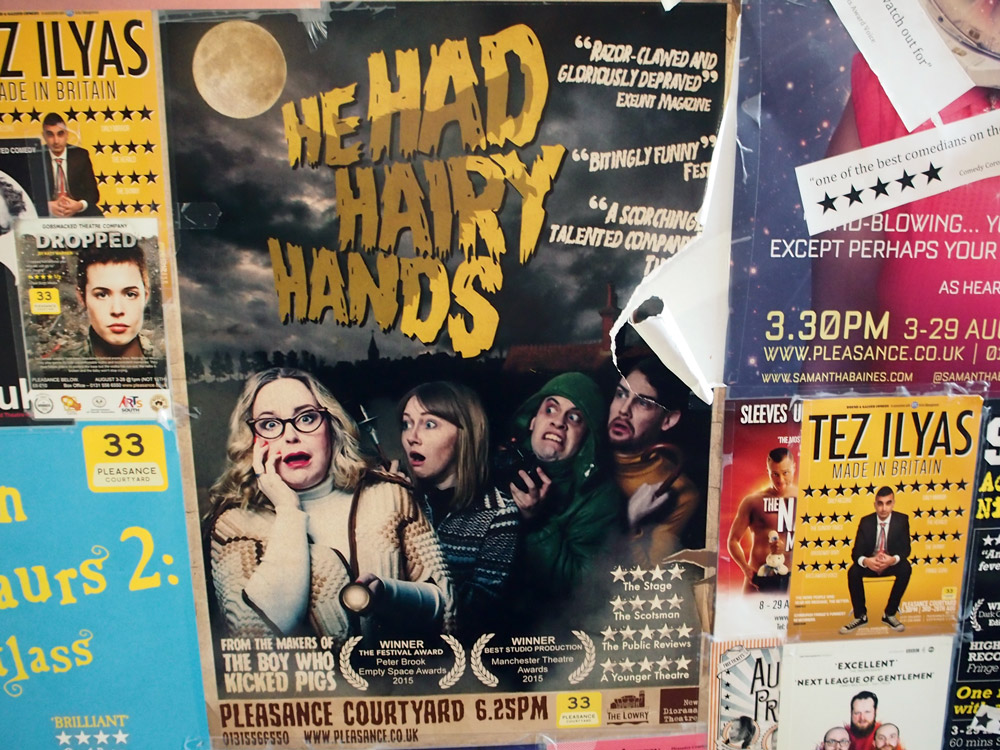 As if to highlight the efficiency of the turnaround times, we were ushered out and back in within 15 minutes to see our second show in the same venue. This time it was Kill the Beast with a revival of their 2014 show He Had Hairy Hands.

Kill the Beast is a four-person troupe of writer/performers, graduates of University of Warwick. Their scene setting and costumes are excellent in this whodunnit werewolf mystery, and it’s hard to fault the energy and commitment of the actors (who have another full-length show, Don’t Wake The Damp, each afternoon). It’s deliberately hammy and shouty which works well in this context, although I did find the plotting over complex and that single-paced delivery became a little wearisome after an hour.

For the first of our two ‘big’ comedy shows we were across Pleasance Courtyard and into the Cabaret Bar to see Nish Kumar.

After the superficial humour of the two previous shows, it took a while to decompress into Nish’s dense political tirade. He knows that so he eased us in gently. His what ‘must it be like to be the (never recognised) drummer with Coldplay’ routine might not be the most original but his story of going to see Prince, and bursting into tears, reassured us that we were in the company of a great comic performer. 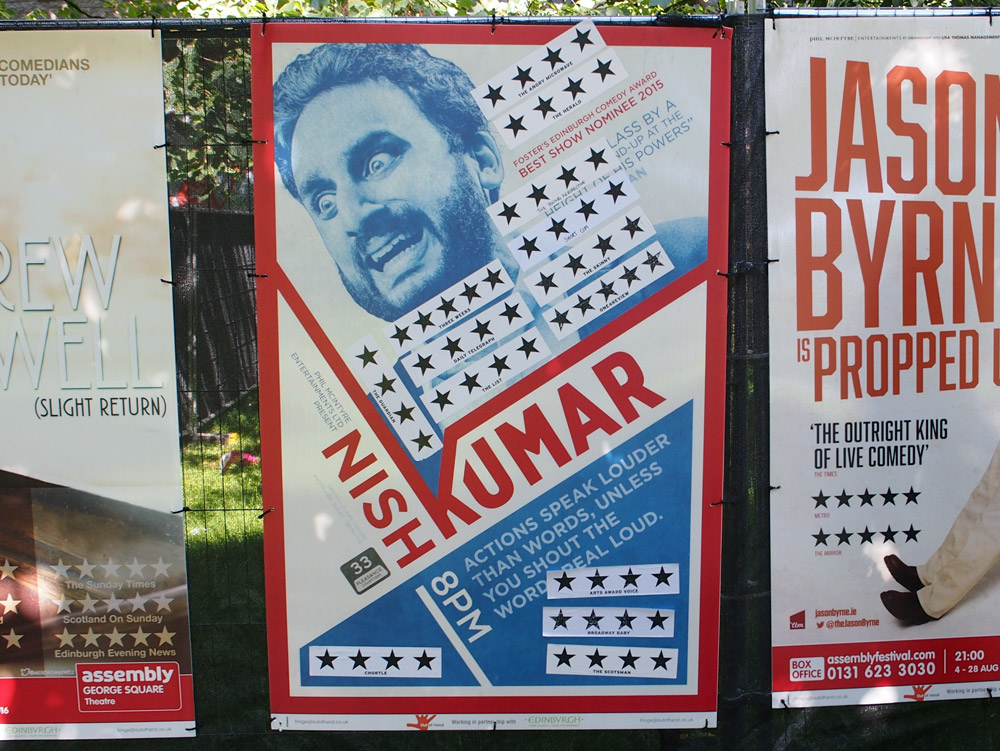 From there he led us gently into more political material. He was always on safe ground lampooning the casual racism of Boris Johnson, whose status, as a rich white man, seems to be afford him impunity.

Deeper into the set and Kumar is defending the comedy staple, Hipsters. As he explains, they are just the latest manifestation of youth culture, and a much less insidious one than the lads and ladettes before them. It may be hilarious when they pay over the odds for breakfast at the Cereal Killer Cafe but they are just symptoms of the problem. We shouldn’t be cross with them, we should be filled with rage at those who cause social inequality and push the gentrification agenda. Again, it’s those rich, white men.

Kumar is careful to point out (after being very politely heckled, at an early outing for this material) that his issue is not with all white people, just with rich, white men.

And now we’re deep into his densest material. He jokes about his own complicity in gentrification and cultural imperialism, and in the privilege of being a proud British citizen. He is torn that his comfortable lifestyle is possible only because of the oppression of his ancestors. He knows he’s pushed us a long way when he starts referencing the Massacre of Amritsar. He jokes about a relative, shot in the back by British soldiers; brave enough to stand up and fight for his beliefs but sensible enough to run away when he realised the other side had guns.

The anecdote that summed up the evening was when he faced a racist heckle at a London comedy club, the day after the referendum. He was so moved by the support of the rest of the audience that he went into a speech about social harmony and justice. And, from nowhere, he uttered words that had never passed his lips… God Save the Queen.

Nish Kumar had overrun by 5 minutes so we had to scurry round the corner to the bigger Pleasance One, and sneak in the back row to see the ‘TV comedian’ Mark Watson. 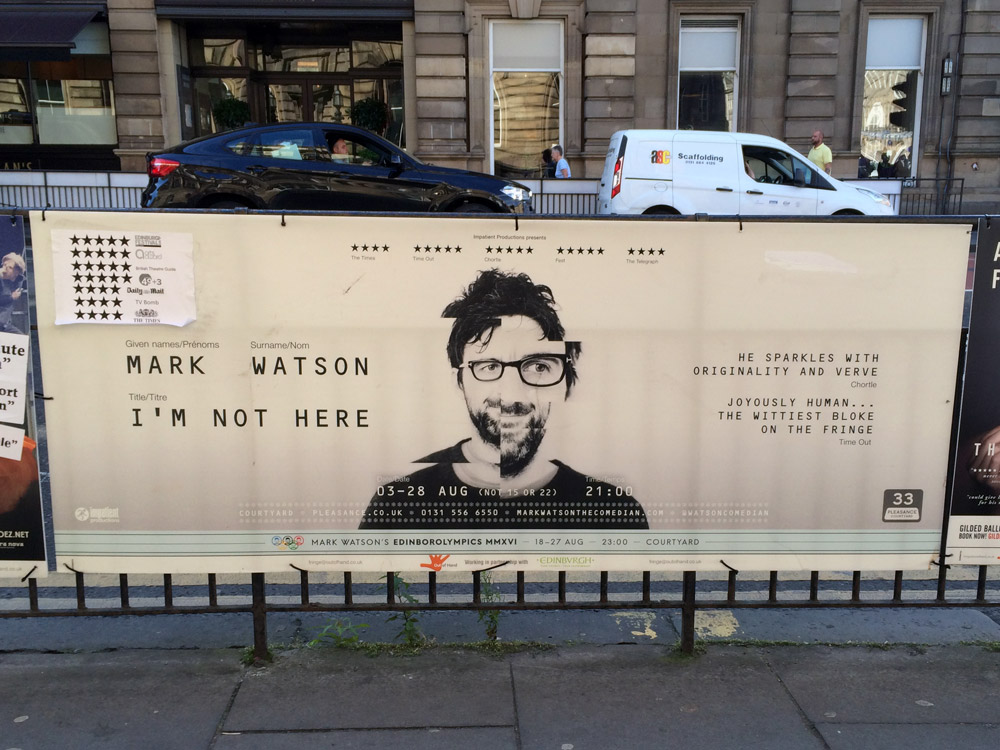 Mark Watson seems like a nice bloke, but you wonder how much of it is artifice when you see this self-effacing man deliver his lines in front of a giant neon M and W.

The set starts with some well worn stuff about him being mistaken for the ‘other’ Welsh stand-up Rhod Gilbert, or even David Baddiel. I don’t  know why I’m snooty about that, I saw David Baddiel do 10 minutes about looking like Steven Spielberg, in his Fame: Not The Musical show, which I found hilarious.

Then he pinpoints a man in the audience by name and Derren Browns him: revealing personal details that he couldn’t possibly know, at least until he reveals he’s been stalking him on Twitter. Where most comedians have banter with the audience, asking them where they’re from, “I prefer to come armed with that information.” says Watson. A great gag.

Then there’s some familiar schtick about young people not understanding tangible things that aren’t screen-based. It’s all a set up so he can talk about travelling to Australia with a slightly damaged passport, establishing the tension of travelling for a day with the prospect that he might not get through immigration. It’s a clever narrative thread that ran through the whole show.

I’m not sure why I didn’t warm to the show but something didn’t click between his deliberately faltering delivery and the clever-clever construction of the material.

I won’t give away the show’s punchline because it’s sure to filmed for TV. Check it out and let me know if I’m just being grumpy.

We thought we’d booked for the 1922 silent film version of Nosferatu. But it turns out we’d actually booked for the frankly bizarre Werner Herzog version from 1979. Still, I’m pleased  to have seen it. If nothing else, it features the most rats I’ve ever seen on screen (apparently they were white lab rats, painted grey).

Time for bed and nightmares.

Day one of Michael’s trip to Edinburgh Festival and Fringe, with Russian Shakespeare and a multiplayer… END_OF_DOCUMENT_TOKEN_TO_BE_REPLACED

Day three of Michael’s trip to Edinburgh Festival and Fringe, with performances in a cellar, a… END_OF_DOCUMENT_TOKEN_TO_BE_REPLACED

Day five (and a bit of six) of Michael’s trip to Edinburgh Festival and Fringe, with… END_OF_DOCUMENT_TOKEN_TO_BE_REPLACED