It’s unlikely you’ll be reading this unless you already know but, in case you don’t, Spektrix is a CRM (customer relations management) and ticketing platform. They were one of the first serious contenders in the UK to offer a cloud-based ticketing platform with a monthly subscription model, which made them very popular with small arts organisations.

We’ve been working on websites that integrate with Spektrix since they were a tiny operation with big ambitions. They are now the UK’s largest providers of ticketing, processing 23 million tickets so far this year.

For as long as I can remember they have organised an annual conference, a chance for their colleagues and clients to meet and talk. It is free to attend and is always over subscribed. When we first knew them, the conference was a get together in one of their theatre venues, now it’s a huge event that requires a dedicated conference venue and all the trimmings. 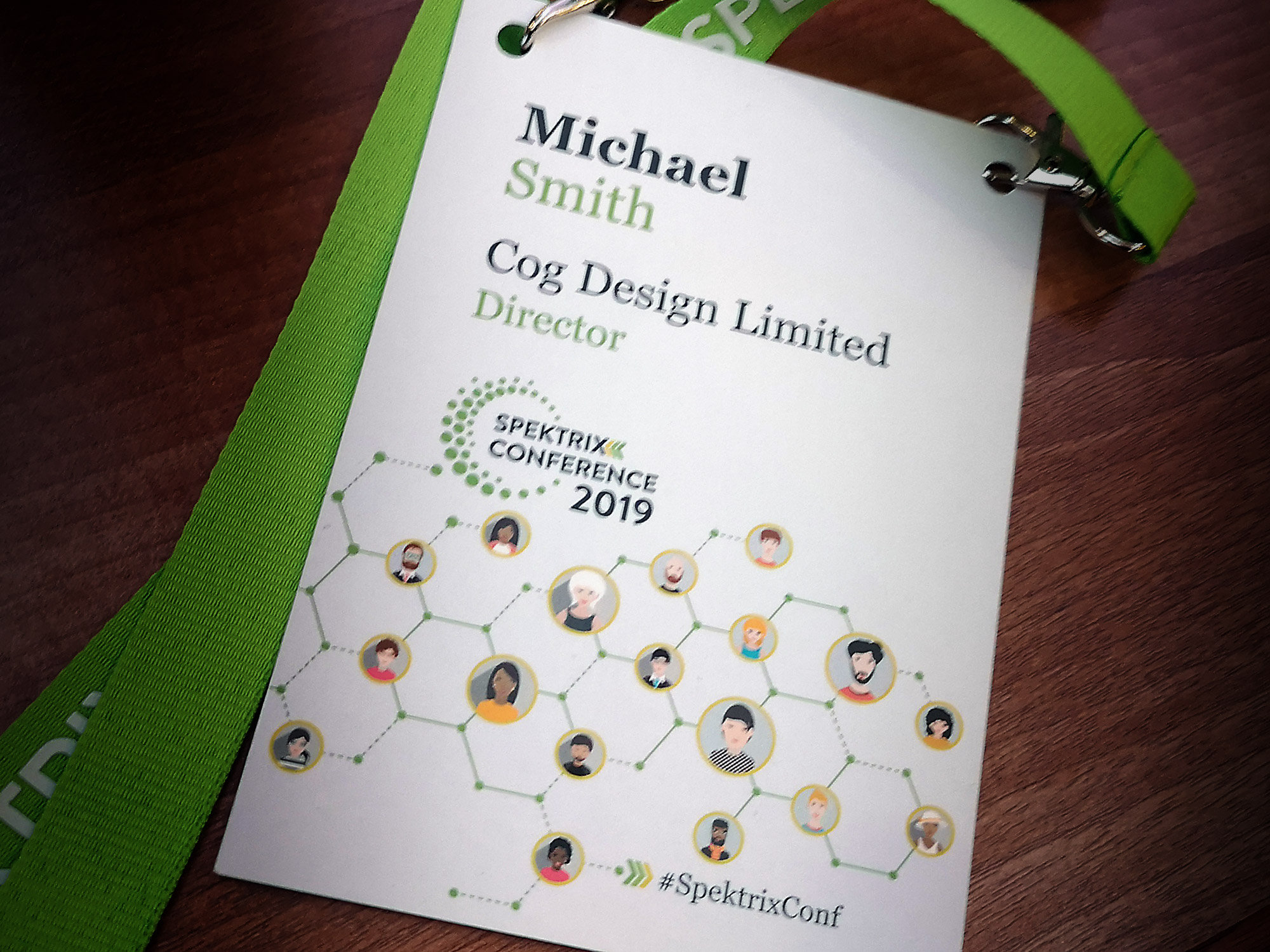 Michael’s lanyard, backed with a personal itinerary of the day

From the outside, it might seem unusual for people to be enthusiastic about a software platform. But if you work in a venue or at a festival then you know how vital it is to have a user-friendly system that you can rely on. And Spektrix provides that, all backed-up with friendly ‘free’ support whenever you have questions. Their users love it, and they love being part of the Spektrix family – it’s impressive to see.

Members of the Cog team have been lucky enough to be invited, often as speakers, to attend for the past few years. But I’ve never been myself.

So, when I was asked to speak at this year’s conference I jumped at the chance. I’ve been asked to write up my talk as a blog post on the Spektrix site so I’ll link to that when it’s live. For now, here’s a view of the audience at my breakout session. 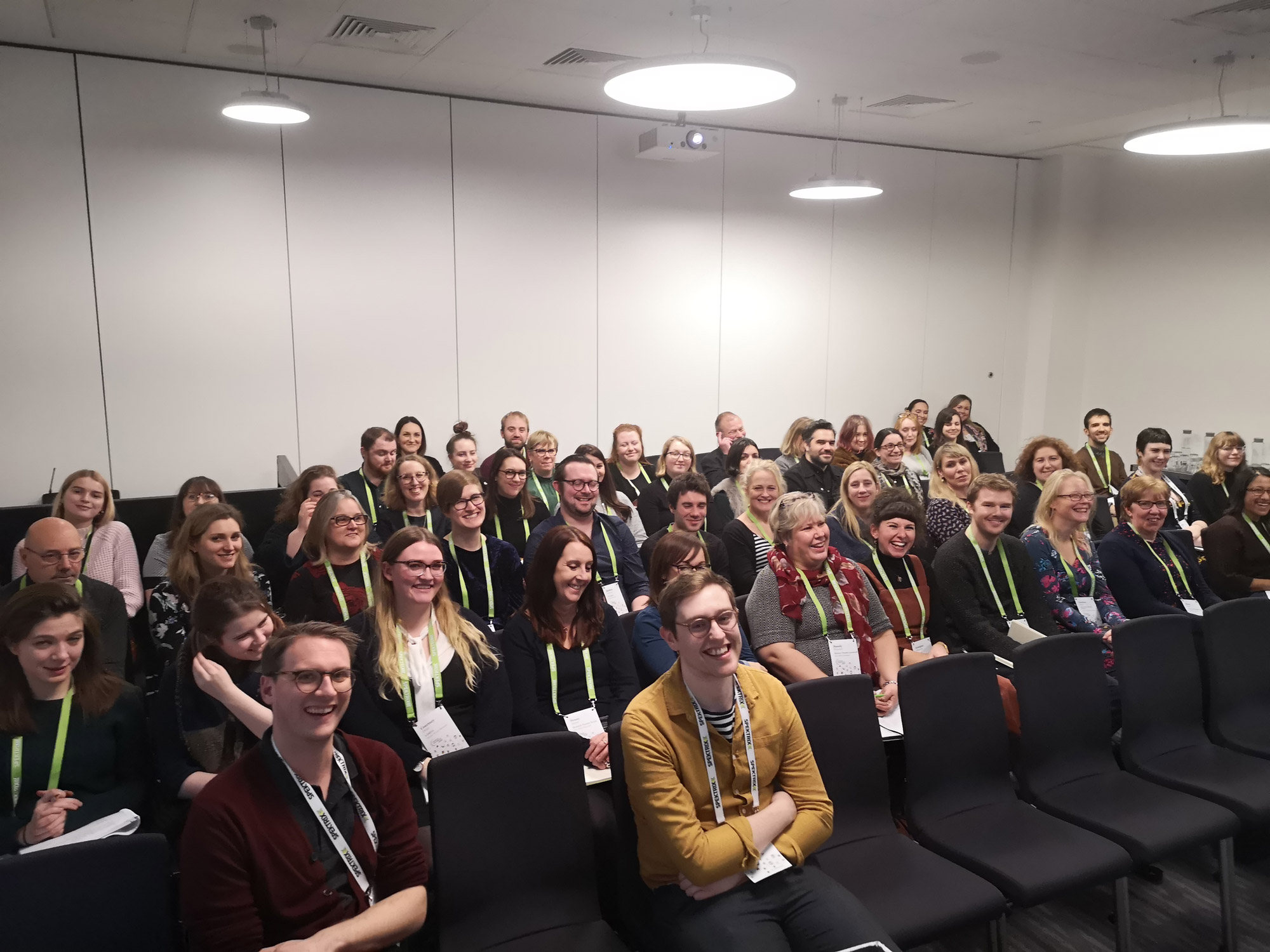 The audience at Michael’s lunchtime session, about empathy.

I’m sure I’ll find other ways to bang on about my own talk in other places. Here I thought it was worth noting some of the other remarkable things about the day.

It wasn’t just about the day

The Spektrix team were aware that many people would be travelling to London (the conference moves between cities, each year) and so they staged various events the night before. They had an open house at their HQ, and specific ‘socials’ in different venues across the capital. Our own Emma Marlow was at the marketing event at Cadogan Hall and had a great time. There was also a Fundraising / Development Social at Soho Theatre, and Box Office / Sales Social at Bridge Theatre. They all looked lively and busy.

I suppose the overall theme of the Spektrix conference will always be how great Spektrix is as a platform. But this year they broke that overall theme down into four strands. I’m never sure how much attendees engage with such things but it did highlight and give shape to the unusual nature of this year’s talks. 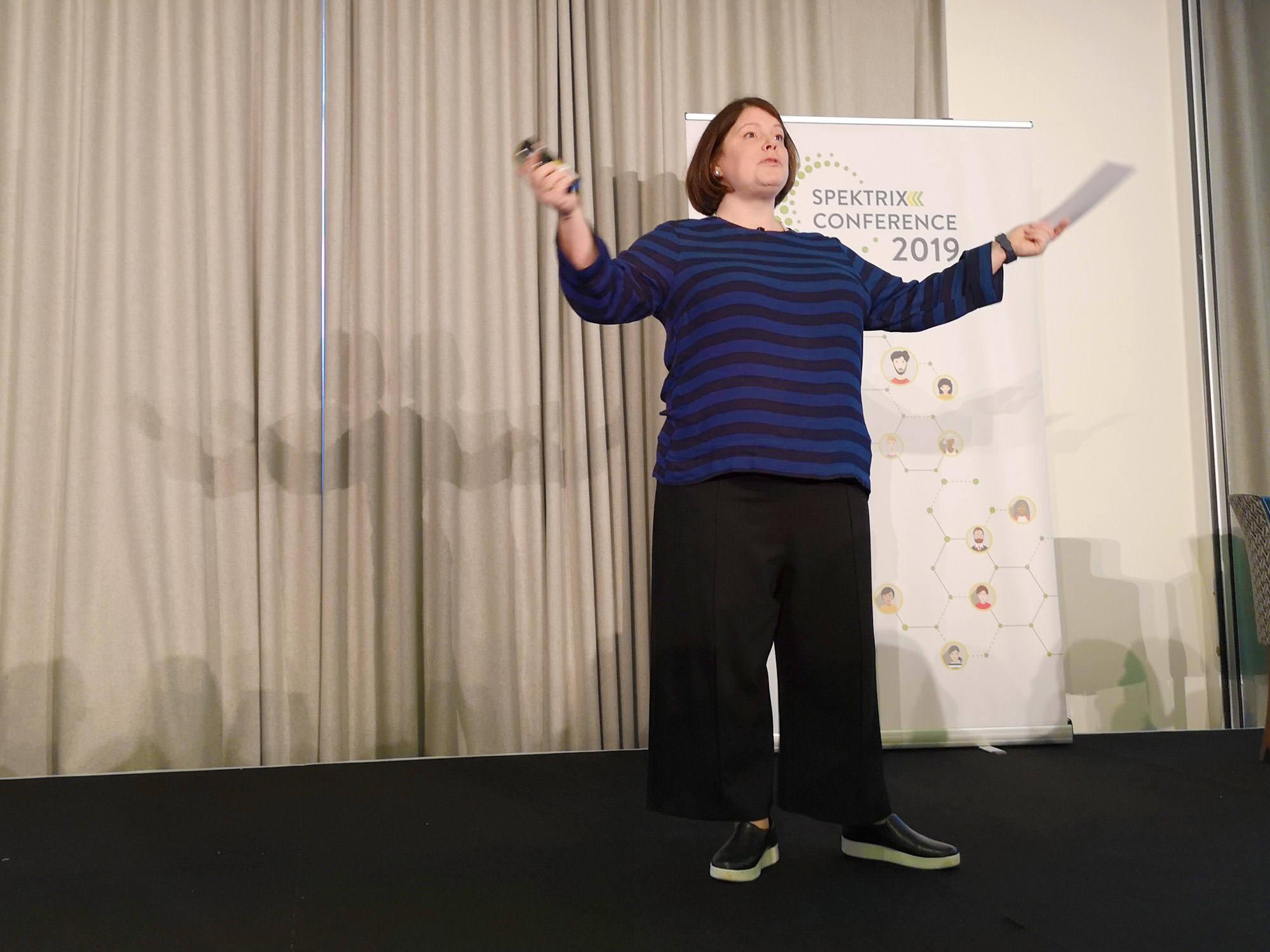 Alice Young, Managing Director at Spektrix, kicked off the day with a deeply personal introduction that somehow seemed to encapsulate all four themes. At the centre of her introduction she spoke about seeking help as a mother and how that had transformed the way she perceived and interacted with her children, and how that had helped her be better at her job. It was a touching and inspiring start to the day. 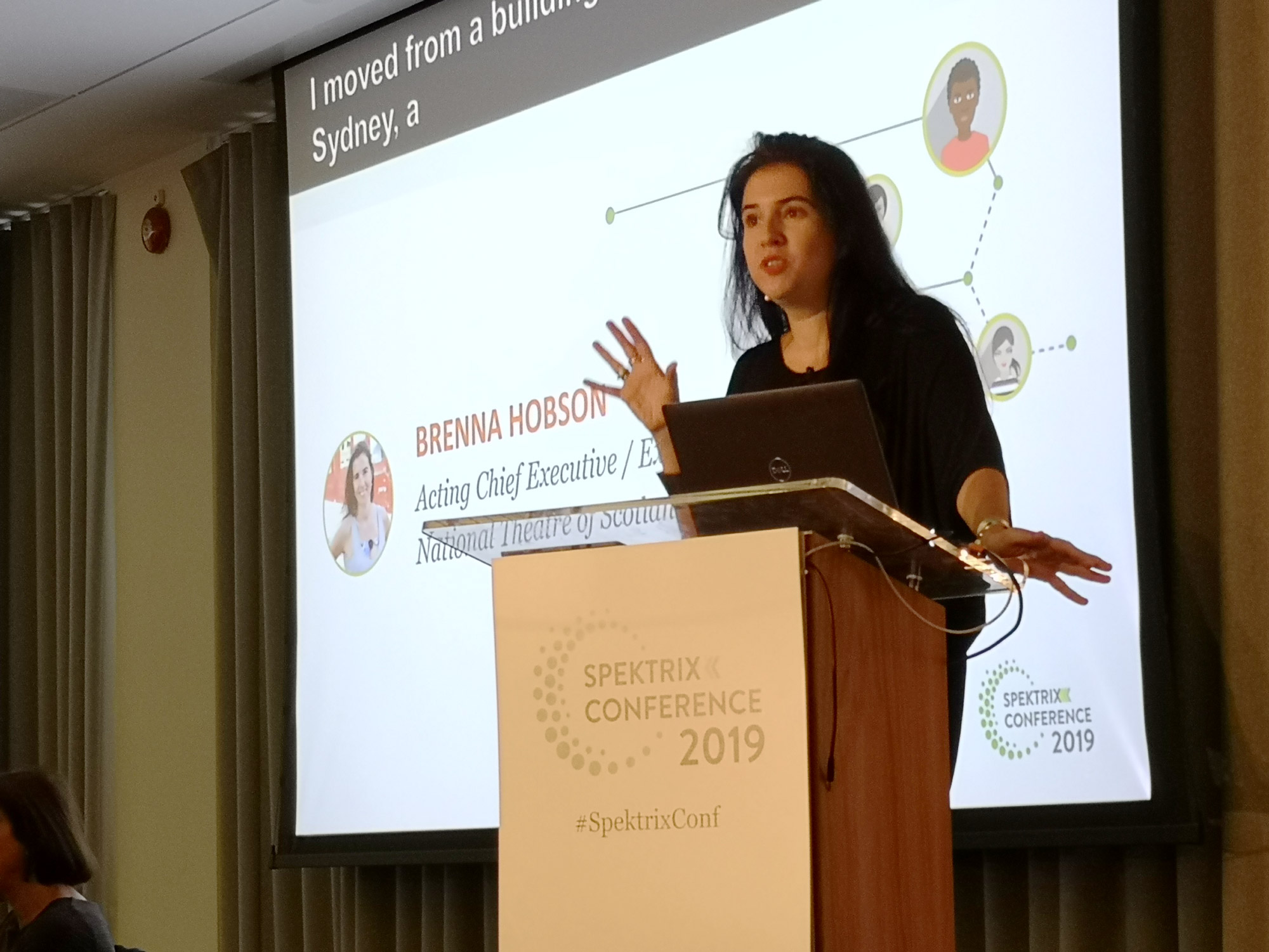 Brenna Hobson (National Theatre of Scotland) spoke about how vital it is to cultivate relationships when you run a theatre company that has no permanent space. It comes with many advantages (of scale and ambition) but also means you are reinventing your audience relationship all of the time.

At one point she told us that the lesson they had learned was that they should have put the Dundee Rep logo bigger on their publicity. I’ve never heard a producer say that out loud.

Next up, the very charming Liam Evans-Ford (Theatr Clywd) spoke to us about the measures they had put in place to improve the health and well-being of their local population as well as their often over-worked staff.

Singing groups and arts for the armchair schemes were hugely important in improving the quality of life for local people living with dementia, who came with their carers. Walking groups help staff free up mental space in their day, and a secret-friend scheme provides space for people to care for each other.

After the soft-skills talks, Millicent Jones (Royal Liverpool Philharmonic) had the tough job of talking about the bottom line. She did it brilliantly.

Who knew you could transform the profits of your front-of-house by stopping selling food and instead opening up more bar space? Or that tweaking the price of the car park, and adding a preferential friends’ parking scheme could rake in £100K extra.

As Millicent told us, if you call everything a pilot scheme then you can try things and abandon the ones that don’t work. For instance, when their ‘pay it forward’ scheme netted £221 and their Facebook donate button raised £60 they knew what to cut. 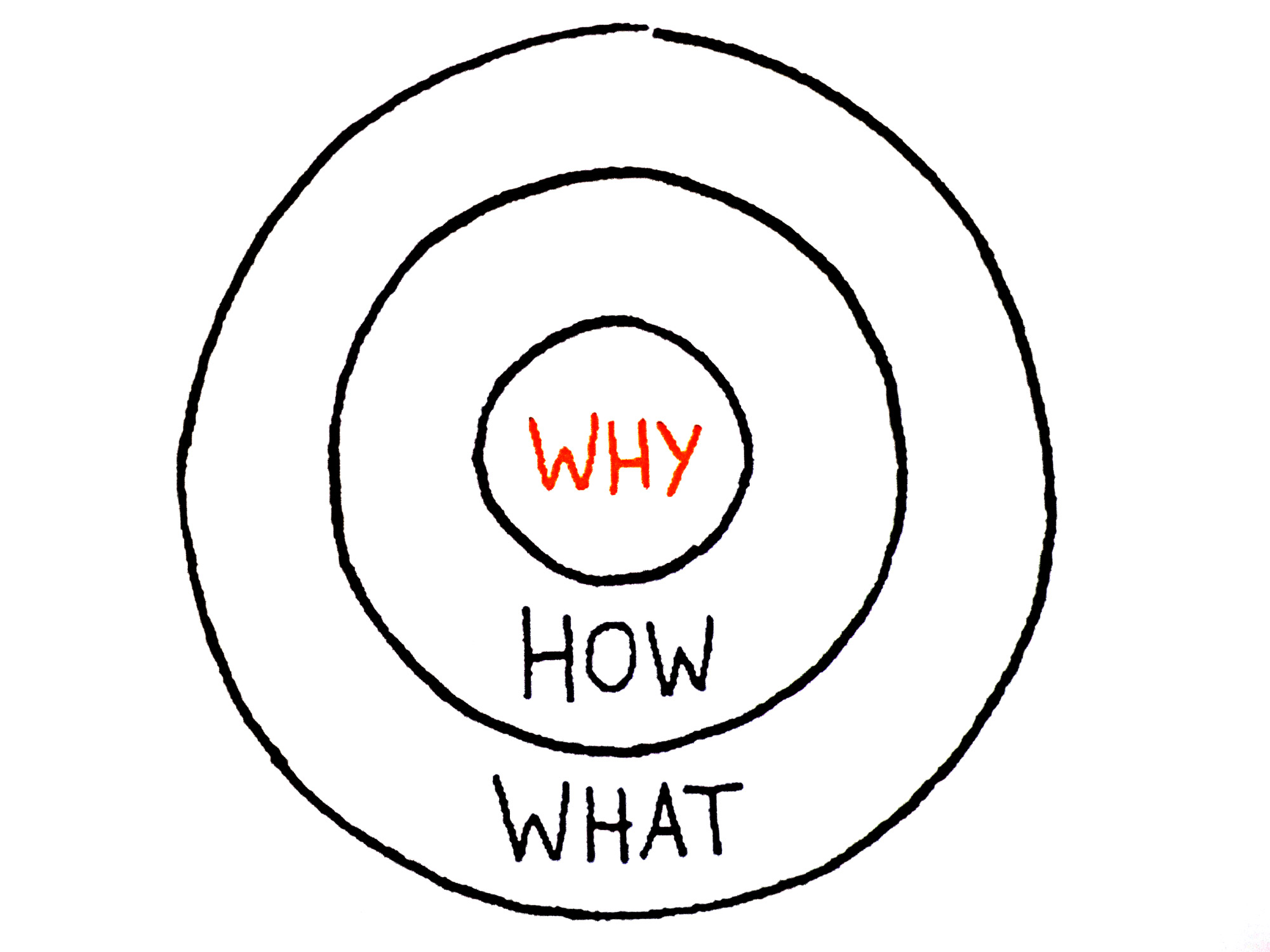 After lunch (which I’m told was excellent but I skipped because my talk was a lunchtime session and because I lost my glasses and spent a fair amount of time trying to track them down*) Spektrix CEO Michael Nabarro took to the stage.

Michael covered a lot of topics. He spoke about the culture at Spektrix and the lessons he’s learned about ‘Alignment’ being the key to a happier, healthier, more productive workplace. It was also nice to hear him say that the soft-skills were something he has to work hard on as they don’t come naturally to him. I can certainly relate to that.

Michael also spoke about the changes at Spektrix, a huge investment in server infrastructure and an investment from external venture capital that has allowed that to happen.

But it was his talk about the ‘golden circle’ and the need to focus on the ‘why’ that left me with a lot to think about and action to take.

I was also intrigued by his closing comment – ask yourself what you can stop doing.

The day went by in a flash. I went to three other sessions that were all inspiring in their own ways.

Ash Mann, from Substrakt, spoke about mapping user journeys and how to understand the motivations of the audiences that visit your websites. He reminded us that, although we may be excited by websites, many people see technology as a threat not an opportunity. And he spoke about the whole experience of an event – from the moment you first hear about it to the moment it fades from memory. 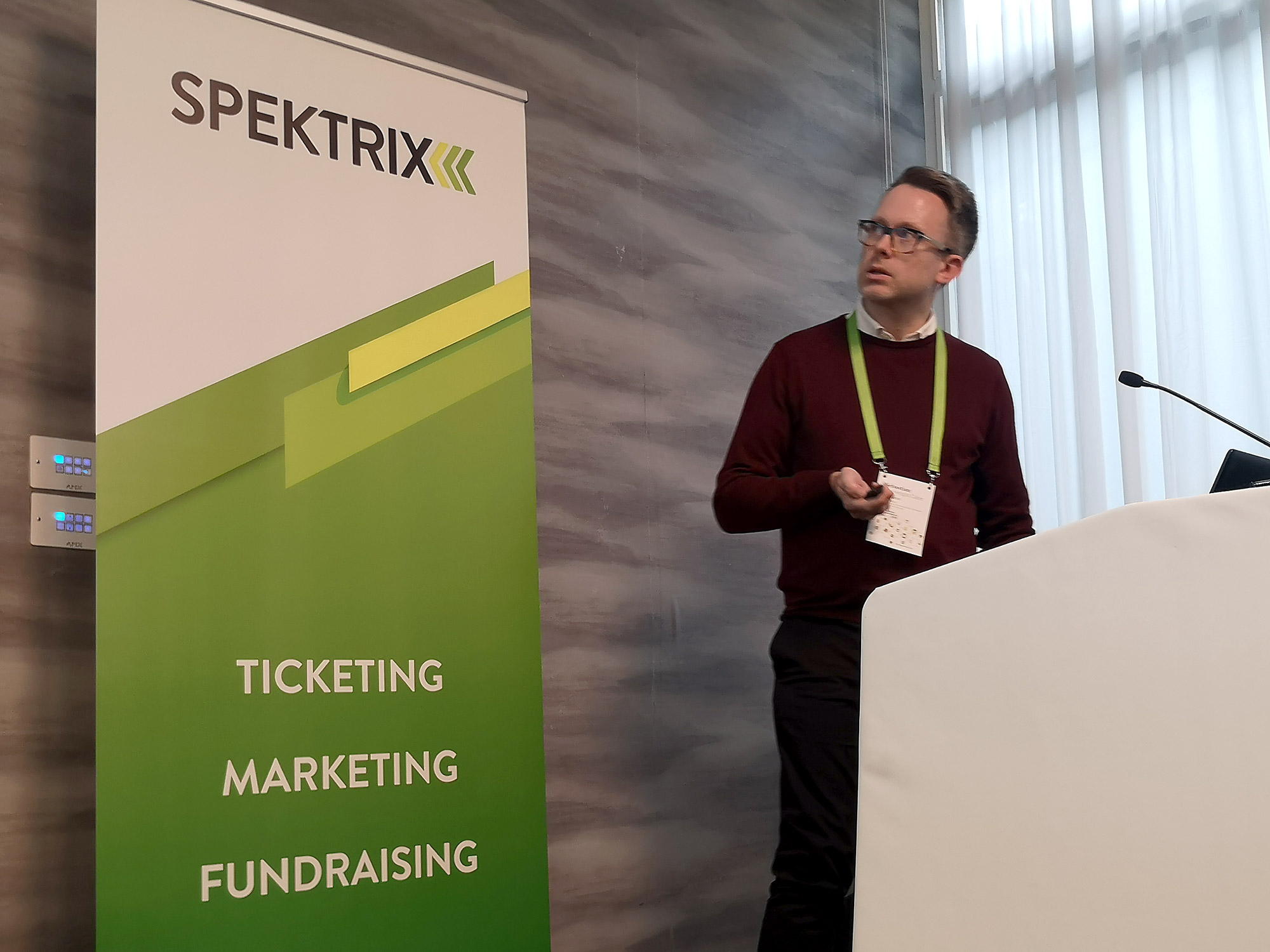 Sebastian Cater (soon to be Head of UK Theatre)

Sebastian Cater (soon to be Head of UK Theatre) shared a session with Nancy Lengthorn (Head of Diversity, Inclusion and Future Talent at MediaCom). They spoke about their Mental Health Allies programme and the difference that is making to the mental health of their team. 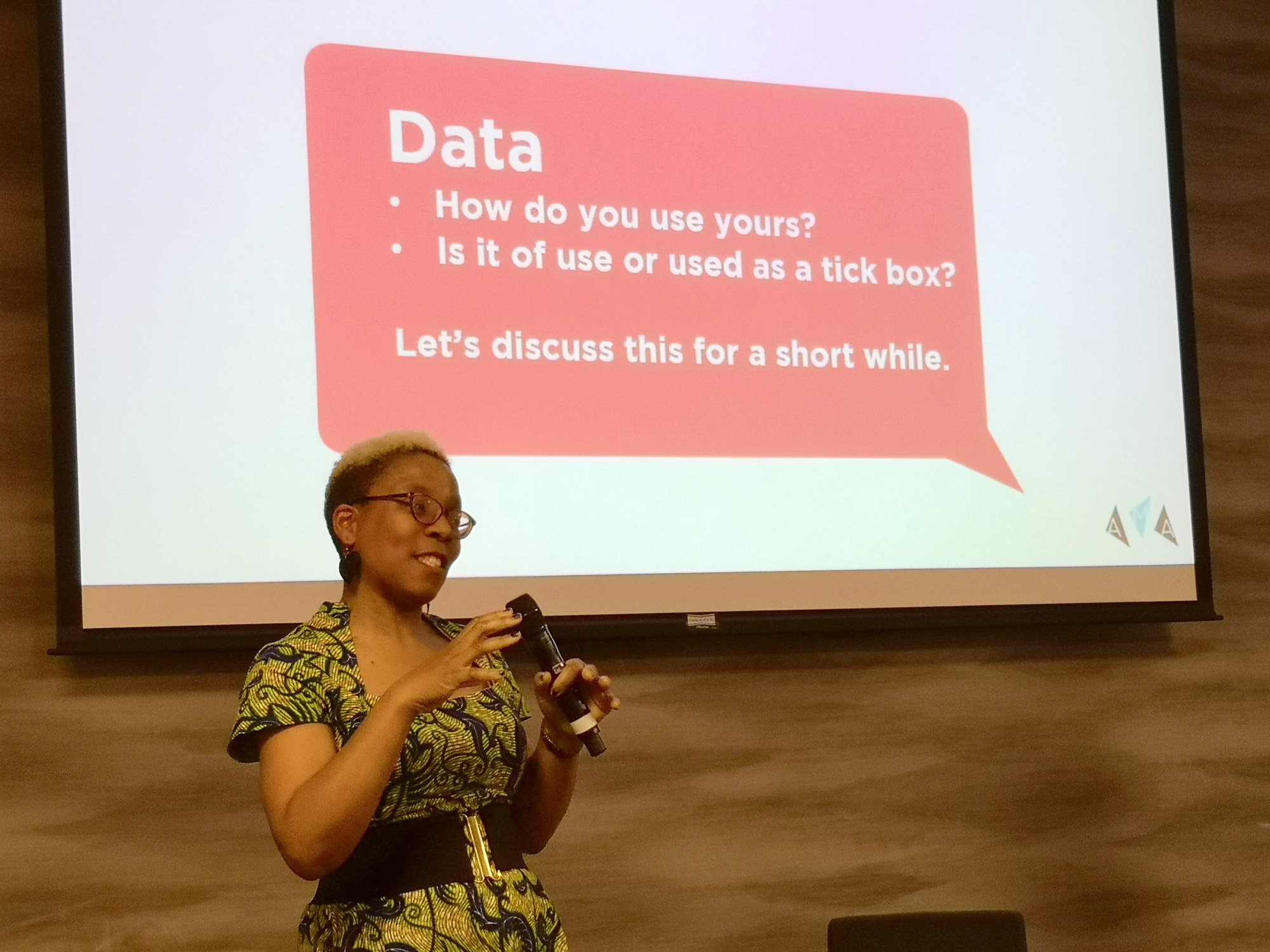 Bea Udeh and Jane Cordell, from Arts Marketing Association, held a really interesting session, inviting us to think about inclusion in its broadest sense. They asked us to accept the wobbly feeling when we are unsure about how to tackle a situation that feels unusual to us, or something as simple as a name that we find hard to pronounce. They asked us to concentrate on the simple word ‘welcoming’.

The closing keynote speaker was artist and writer, Jess Thom who most of us know through her initiative Touretteshero. 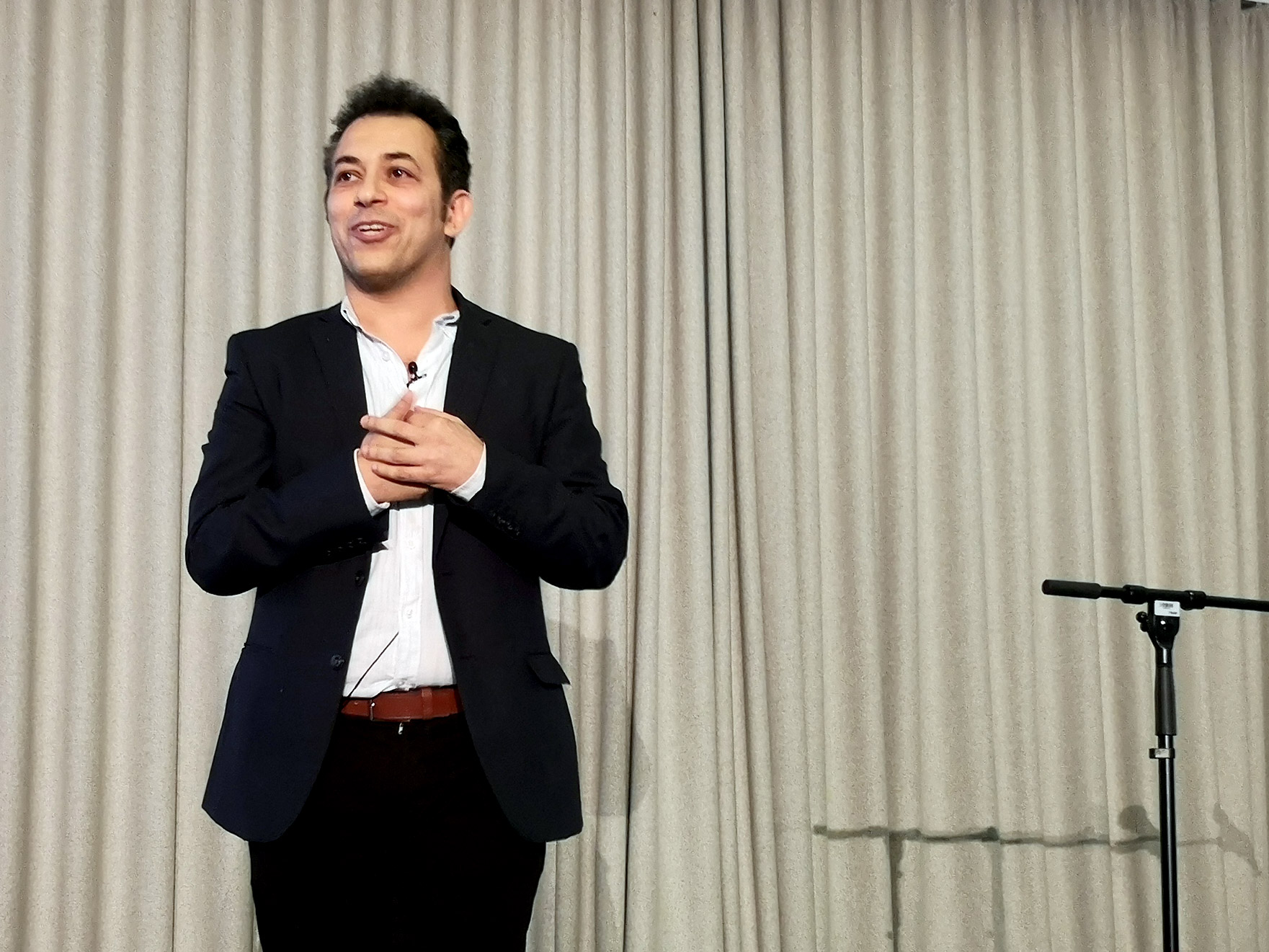 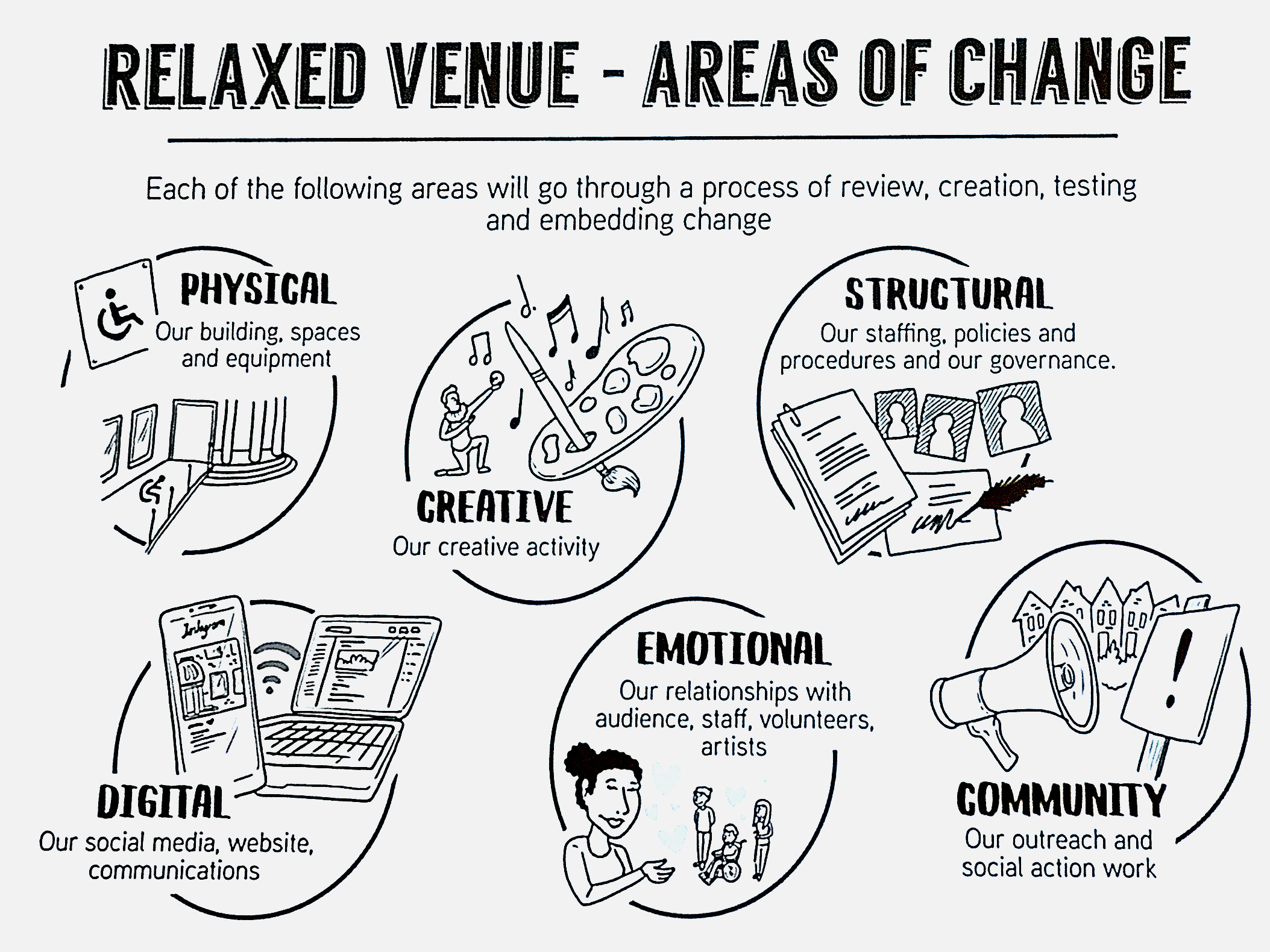 As he said, Jess challenged him by asking why all arts centres work so hard to keep people out. From now on 95% of BAC arts performances will be relaxed, the building has been adapted and the staff trained in the simple things necessary to make the space open to all. 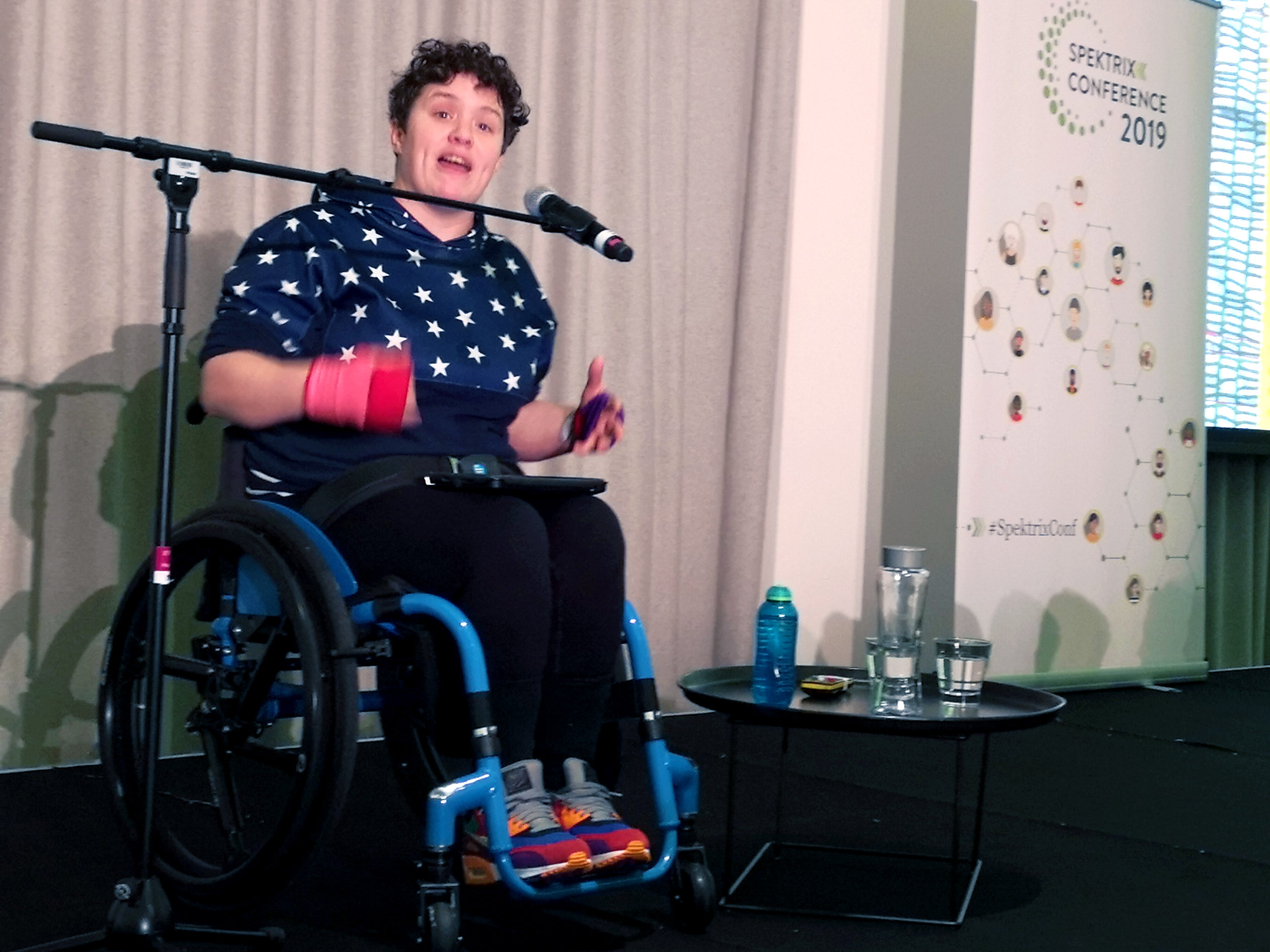 Jess Thom was a brilliant booking, the perfect, high-energy, funny, inspiring, thought-provoking end to the day. She made us all question our preconceptions.

She told us that 73% of disabled people felt discriminated against when trying to book access. And that 22% of the UK population identify as disabled.

She made us ask why she should have to spend six hours arranging simple provisions to be put in place to allow her to attend the same theatre shows as anyone else.

As she explained, it is fine to laugh when her tics make her funny (and it would be really odd if we ignored them). She rarely gets embarrassed by Tourettes, she said, but when the words ‘Boris Johnson’s foreskin’ jumped out of her mouth, that came pretty close.

Now’s the time to admit that I hate conferences. I have left several part way through as I find the atmosphere so bizarre. But the Spektrix conference was different. Everyone was welcoming and friendly. There were no cliques or circles of exclusion.

Everyone I spoke to was welcoming and friendly, and every member of the Spektrix team was on top form all day and onto the after-conference bar session. I slunk off before the serious partying started but I hope that everyone had a suitably ‘relaxing’ time.

Special thanks to Brooke Gallagher who was in charge of organising it all, and Anna Wiseman, Tom Nolan and Alice Young who have looked after me on the day and in the lead up, and to Annie Pearce who came to my practice run-through and sat through the talk again on the day.

I really hope I get invited again next year.

* I lose glasses so often that I have taped my name and phone number to the case. By early afternoon they’d been handed in and retrieved for me by a member of the Spektrix team, whilst I chatted with a delegate who’d flown from Vancouver just for the event, and had nothing but praise for Spektrix.

Take a look outside

Jack writes about the lessons we can learn by looking outside the arts sector, and how… END_OF_DOCUMENT_TOKEN_TO_BE_REPLACED

Wednesday sharing with Spektrix’s team Brooke, Anna, Ed, and Nell and Bethany from their US office…. END_OF_DOCUMENT_TOKEN_TO_BE_REPLACED

Michael and Jack are at the RSA, meeting with Anna Wiseman from Spektrix. END_OF_DOCUMENT_TOKEN_TO_BE_REPLACED